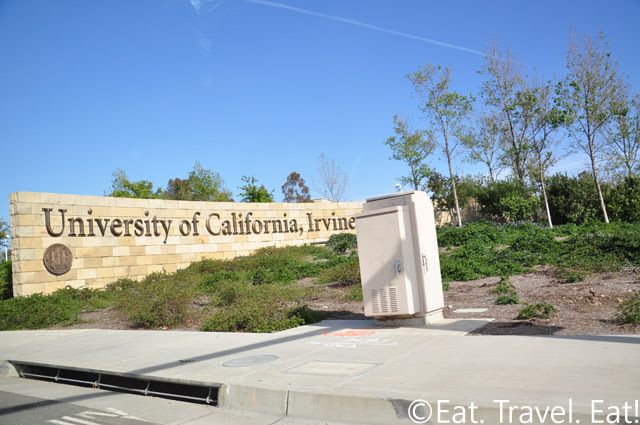 Every visit to the OC pretty much starts out with a visit to UCI through the Bison entrance. There is an advantage to this. It's closer for those who live in communities like University Hills, Middle Earth, Arroyo Vista, et cetera to come through this entrance. Secondly, the entrance is grand, with two of these beautiful welcome signs to greet you. They are most certainly the best welcome signs in the entire UCI. :) 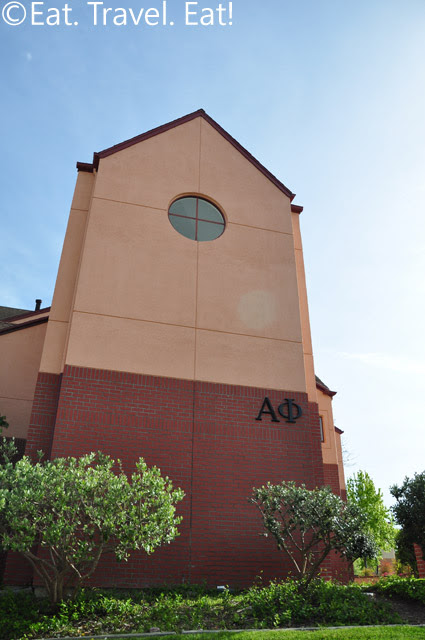 I took a picture of one of the buildings at Arroyo Vista for fun. 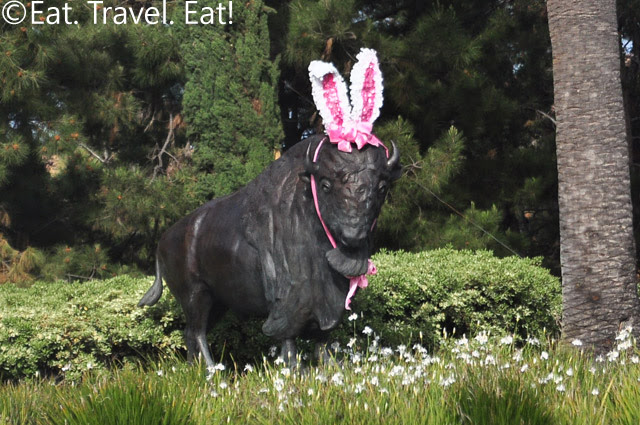 After dropping stuff off at UCI, we headed off to Fashion Island, but meanwhile, a bronze bull had suddenly become one with bunny ears for Easter as we waited at a stoplight. 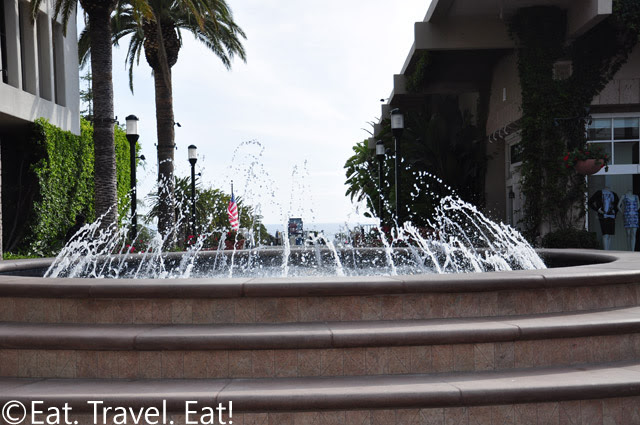 Unfortunately, Fashion Island was closed, but there was still plenty of scenery to see. Like the fountain that you see here. 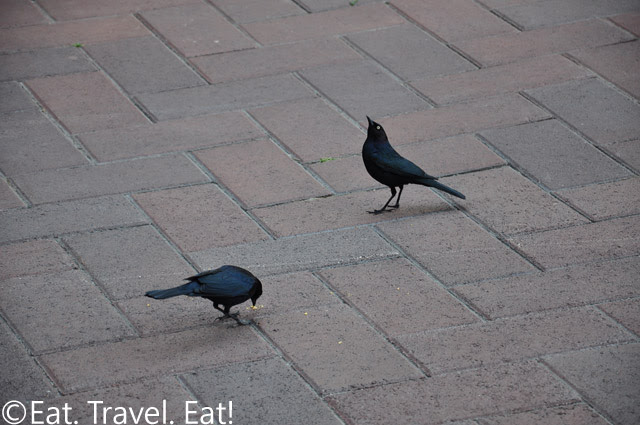 Crows made funny faces and ate what they could. They did not look bored at all! 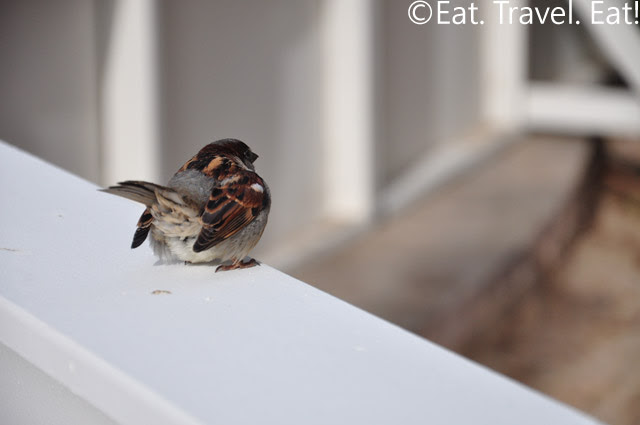 And this cute bird was staring into the construction taking place at Fashion Island. 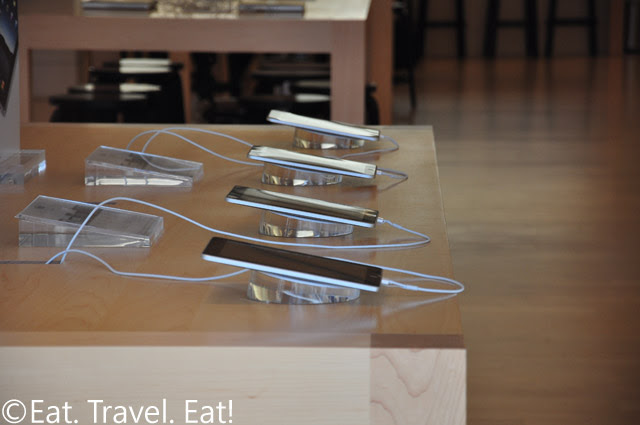 iPad customers would cringe at the sight of an empty Apple store, one that they could not go into to buy an iPad. Sadly, that was how almost everyone felt. People looked at the store, looking at the two iPads on display with a slideshow on program. The one person inside the store on an iMac is lucky. :) 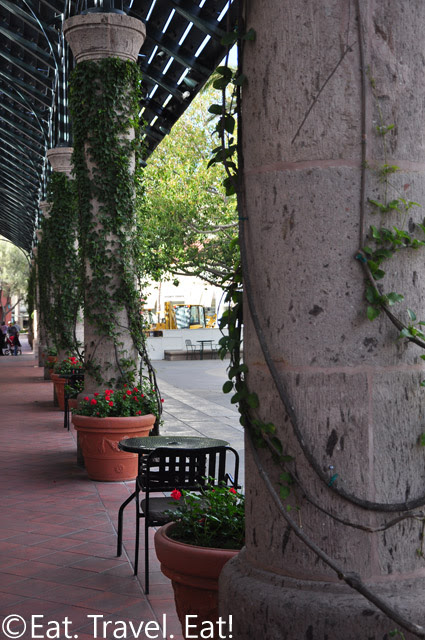 But who cares about an iPad when there is beautiful scenery? 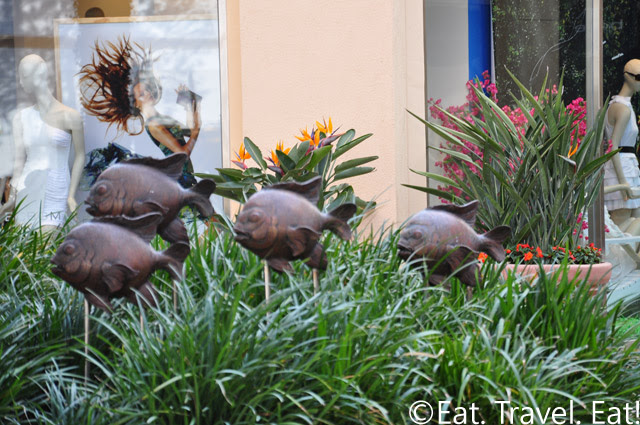 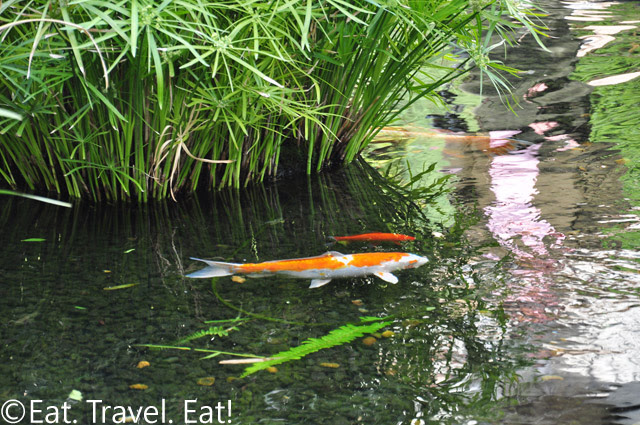 And beautiful koi fish? Everyone wanted to look at these. Cameras came out to take pictures of them, kids oohed and aahed at them. They are pretty. But when hunger comes, you go to a restaurant, or go home. Home wasn't nearby for us, so we settled with a restaurant. Roy's! 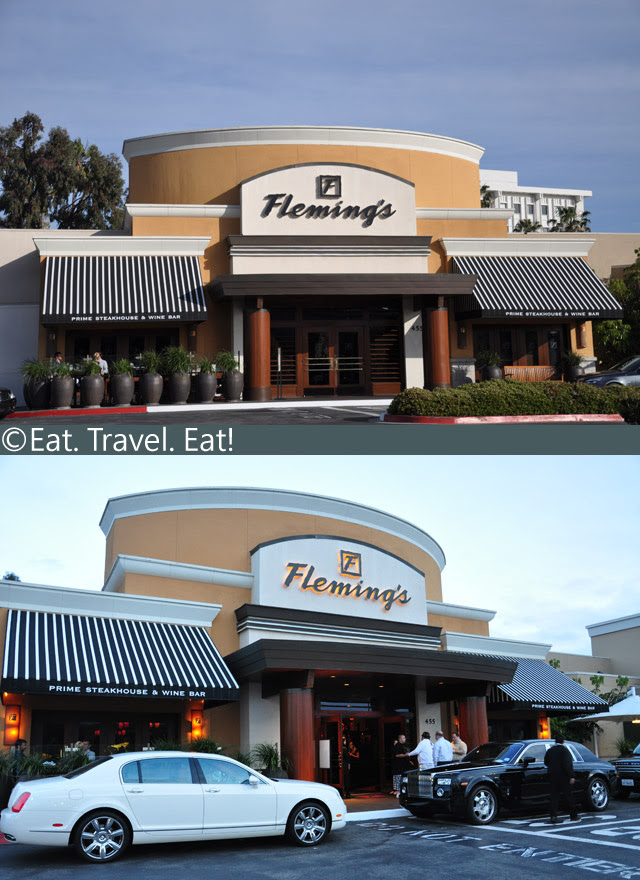 Nope. We entered the Roys' parking lot, which we thought was valet/self park. But, it was only valet (6 dollars). So, since the guy waved us off, we chose Flemings next door. That's how easy a restaurant can lose 160 dollars! One simple action by one employee. 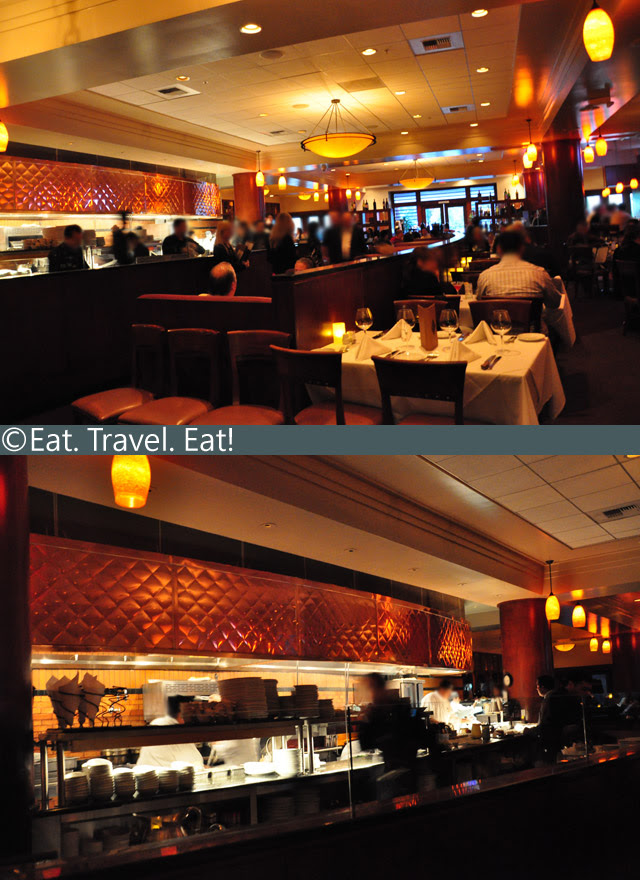 The double doors were opened by two greeters and we entered the entry area, where large bottles of wine were placed for decoration. Further inside, it was exceedingly dark. We were moved into a special area of the restaurant where it was better lit. I think it might have been because I was wearing my TA jacket and my camera on my neck and how our clothes were not as comparable to some of the formal folks sitting in the dining room, but who cares? Better lit place= ability to see what you are eating and better quality photos. Even if it was bright, I used ultra high ISO's in the end, as we got the corner spot with so-so lighting. With my hands shaking and off-focus with some items, a number of photos turned up blurry. 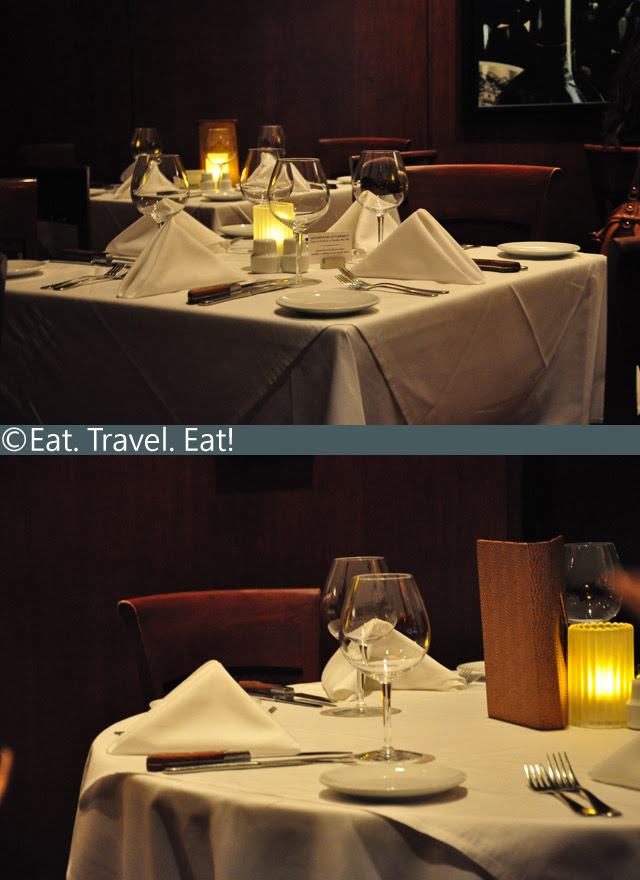 All the tables were set up very nicely. Artificial candle, two knifes and forks, a bread plate, and a wine glass. 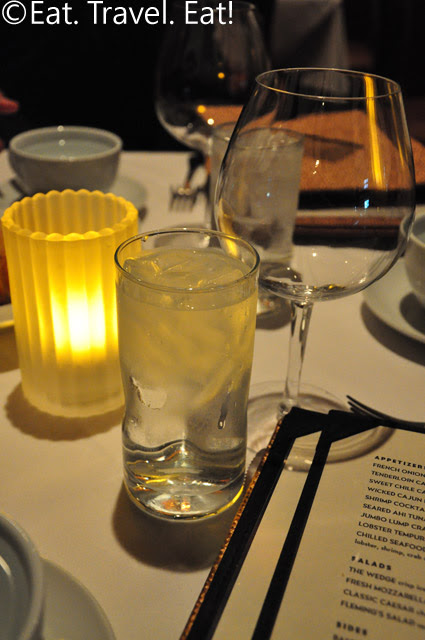 Special thought was made into their water cups too. They were indented so your hands had a better grip! 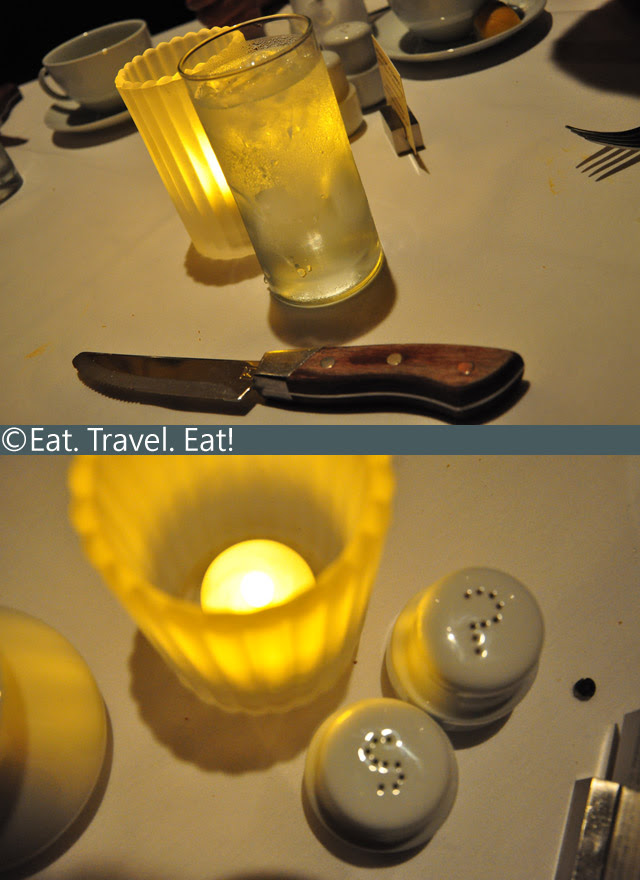 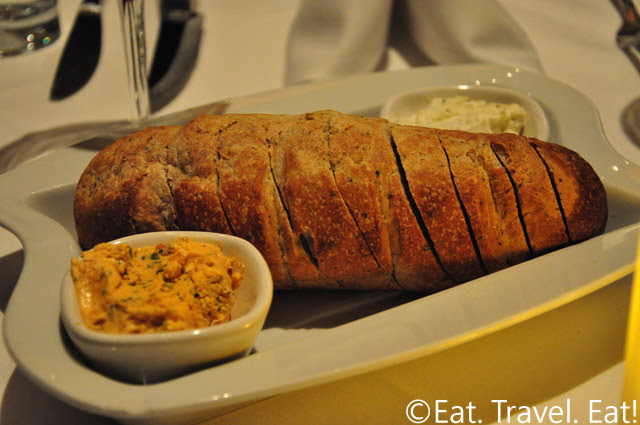 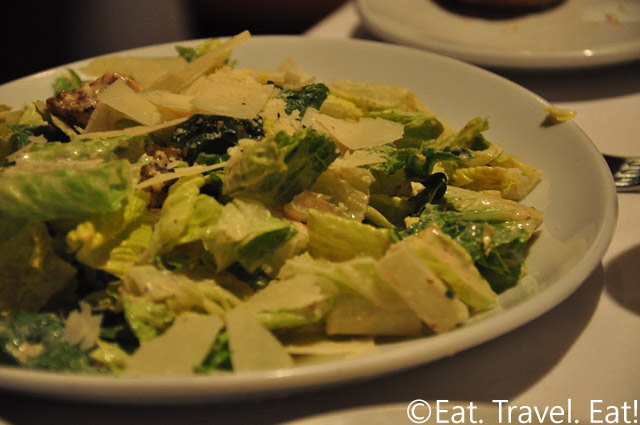 Our salads arrived next. Both came as part of the set menus. Here is the Caesars Salad. The dressing was quite flavorful and a bit on the salty side. Romaine was cut into nice small pieces which were not too cold and there were large shreds of the aged Parmesan cheese. I did not try the the croutons which were supposedly baked with dijon mustard. 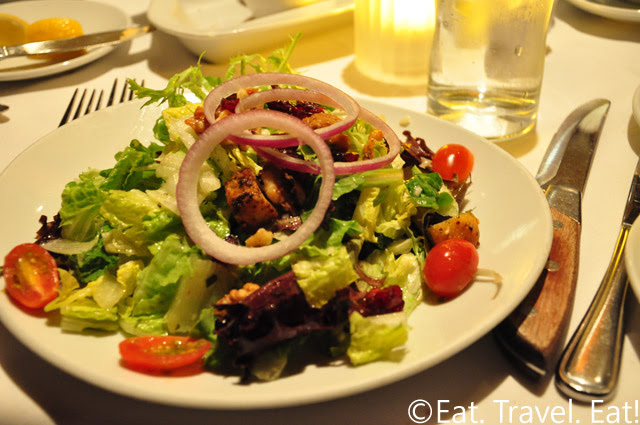 Fleming's Salad- I ordered this as my salad for the Prime Rib Dinner. This was tasty, with a spring mix of veggies, flavorful grape tomatoes, toffee candied walnuts, and dried cranberries in a lightly sour vinaigrette. My dining companions who ordered the Caesars Salad now wanted my salad. Plus, the serving size was slightly larger :).

After a few more minutes of waiting, our mains arrived. 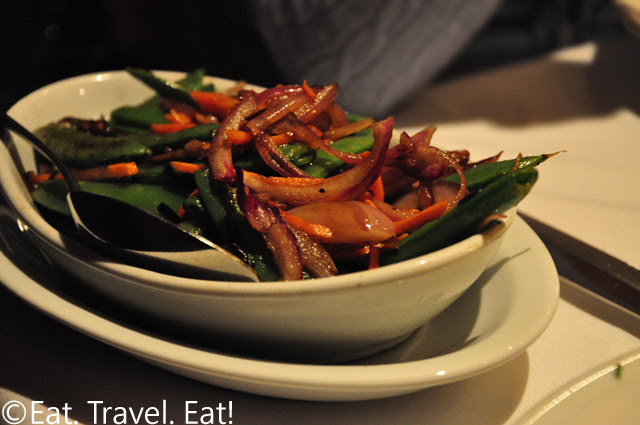 Our prime rib dinners came with sides, so I'll show you those first. Mine was Sugar Snap Peas with carrots and red onions, soy chili glaze. This was quite oily and had an Asian inspired taste. The sugar snap peas should have been more crisp for me, as there was plenty of oil used already (but they are not a Chinese restaurant, after all and do not have a wok). Otherwise it was pretty good, with the soy bringing some savory and the chili bringing a very slight hint of heat. 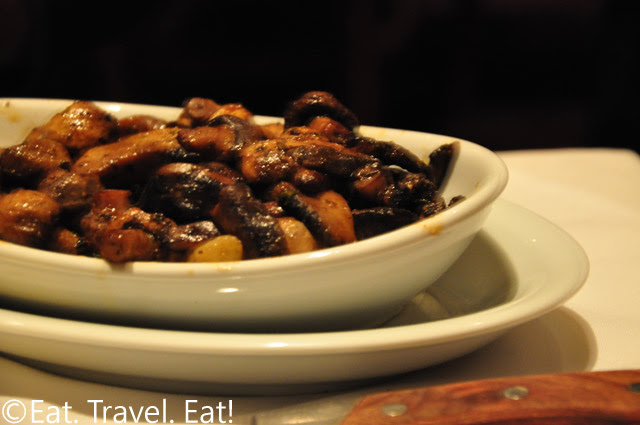 My dining companion ordered the Sauteed Mushrooms, which had fresh button and portobello sautéed in butter with whole garlic Yet again, oily. I guess I am sides that go with meat are supposed to be oily? Otherwise, it was a very concentrated mix of mushroom flavors. Almost like eating a concentrated mushroom soup. :) 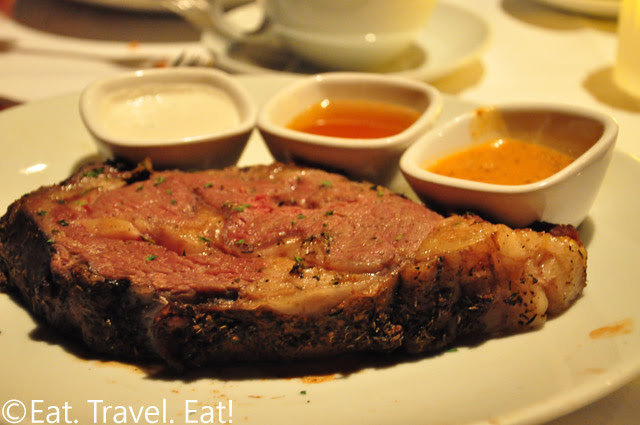 And here's the main event- Prime rib! It was a very, very large and thick cut of meat with horshradish sauce, aj jus, and a sauce I can't identify which was slightly sweet, peppery, vinegary, and horseradishy. 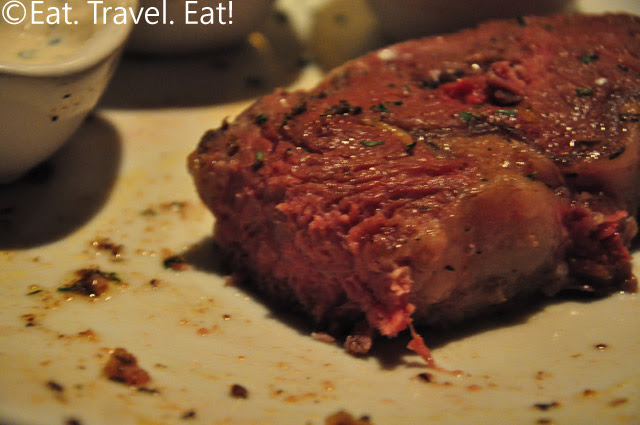 This was OK, but we ended up not so happy as we haven't eaten medium steaks in a very long time. There was a lot of fat and the meat was very tender and beefy. However, there were some hard to chew parts due to the tendon/connective tissue, which there was plenty. Overall, OK but this is a ultra large cut of meat. I ate half and was stuffed to the point of miserableness... The horseradish sauce was excellent with it being creamy and not too peppery due to the amount of horseradish. The aj-jus was too bland and I could barely taste any flavor from it when drinking it by itself. The unidentifiable sauce was a good second choice to go along with the meat as it was slightly vinegary. The prime rib had a semi crisp outside but used a lot of herbs to flavor the meat which thus affected the taste of the auj jus. There ended up being so much meat we made a stir fry the next day of this and the sides. What can I say? We finished the sides, left the meat alone. Too much meat= hate meat for the next few days. 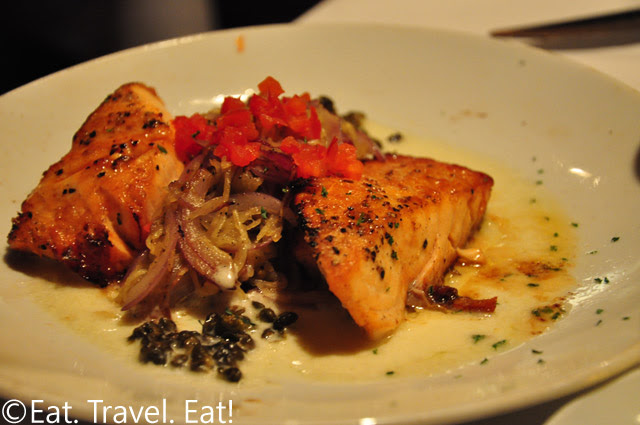 My dining companion who had the prix fixe menu had the Broiled Scottish Salmon with spaghetti squash, lemon garlic beurre blanc and crispy capers. This was pretty good, with the salmon being quite tender. However it was a slight bit fishy. The crispy capers were crispy and were like eating salty potato chips. The Spaghetti squash had a carmelized onion flavor to it and was cooked to tender. 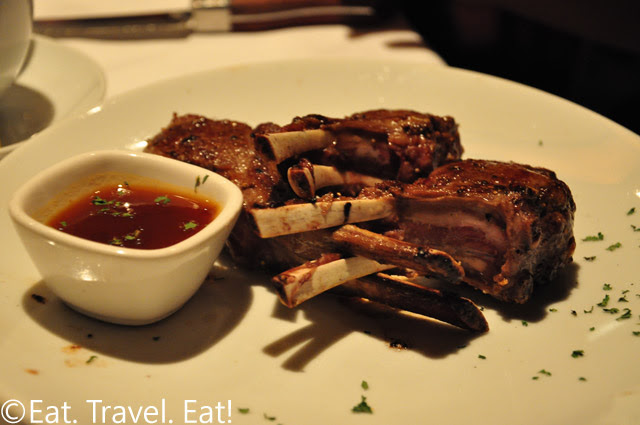 Last but not least, my last dining companion who did not order a salad or dessert had the New Zealand Lamp Chops, which had 3 double thick broiled chops and a champagne mint sauce. No wonder why you pay so much more for this cut of meat! There were 3 double thick (equal to 6 regular pieces of frenched lamb chops) pieces of beautifully cooked lamb chops. This was not very gamey and was seasoned perfectly. The meat was ultra tender and was very marbled. The champagne mint sauce was not like the description, more vinegary with a wine hint and some mint flavor. Not regular mint sauce, but excellent overall. I don't care about mint sauce anyway as I never eat it. :)

And after stuffing ourselves as much as we could but failing, dessert came. Meanwhile, our table was dusted off with a bread crumb remover. 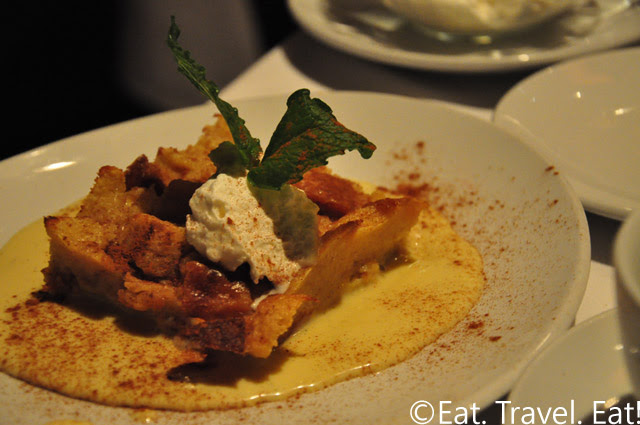 My dining companion who had the prix fixe menu had the White Chocolate Bread Pudding for dessert. It was an usual piece of not too wet bread pudding with a white chocolate sauce. Simple but if you like bread pudding, you'll enjoy this. I ordered the Chocolate Lava Cake, which was rich chocolate cake with a molten chocolate center, served with vanilla ice cream and chopped pistachios. Why? Well, it was the most expensive at 10.95USD on the regular menu. This was giant, with a slightly crisp exterior and a moist cake interior and chocolate sauce inside. On the side were two mini scoops of house made vanilla ice cream which was ultra creamy like at Pelican Grill and Charlie Palmer. There were also pistachio butter cookies which were like Trader Joe's Butter Thins but better, chopped pistachios, and a chocolate sauce as the base of the whole thing. Three raspberries were also served, which were ultra fresh. Good but quite thick and fat for a dessert (but if you like it, it works!) The ice cream and raspberries were "lighteners" to the chocolate. Good for a chocolate lover, I'd say. But if you don't like sweet chocolate-y desserts, stay away. 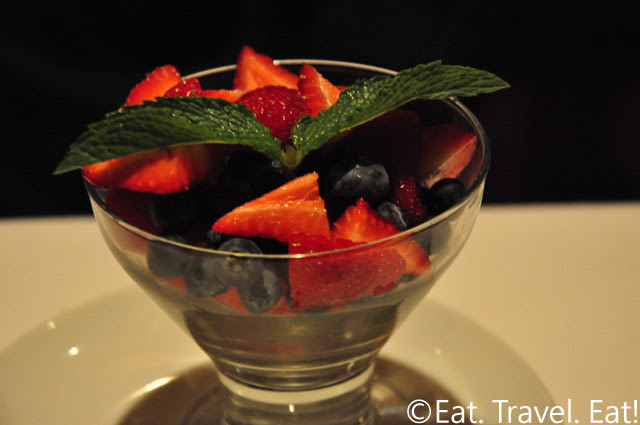 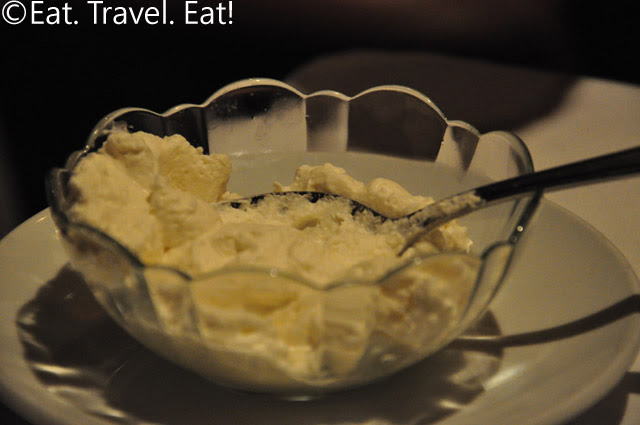 Since my dining companion did not want something too heavy, he ordered the Fresh Berries and Chantilly Creme- The complete contrast to the chocolate lava cake. A bowlful of strawberries, blueberries, and raspberries which were ultra fresh and sweet coupled with a separate bowl of thick fresh whipped cream. I prefer Charlie Palmer's edition due to the lightness of the cream, but still a very good light dessert. After all, you do not need to eat the cream.

Overall? An okay meal. Desserts and Salad were fine. Entree's, a bit lacking. Not planning to return due to the amount of meat though. It's too much to handle for us!

kirbie said…
I love visiting OC during the weekends too! But I never visit the Irvine campus. I should do that next time.
April 12, 2010

As for Flemings, my husband loves the meats there - even with marbling and fattiness. Me, not so much, but I'm not a big meat eater to begin with. I am tempted by the mushroom dish, though, with a little bread to saap up the oil : ).
April 14, 2010

Jules,
Haha, the Bison Bunny is cool! I never was a real big steak/ meat eater so I was OK with the idea of going there. Prime rib and lamb chops though, I do like! Too much for me to eat though...
April 16, 2010