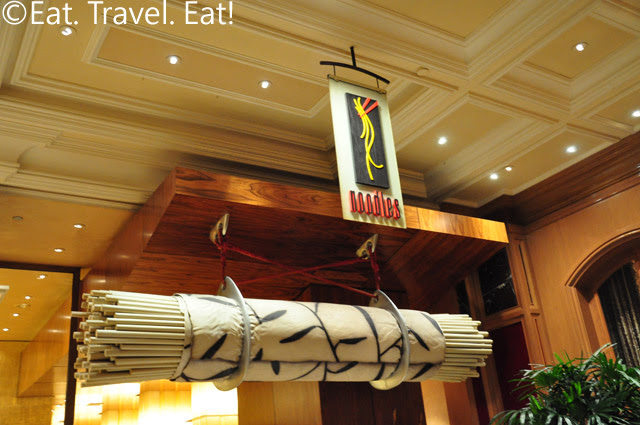 After walking around CityCenter and Bellagio it was quite obvious that I needed to go back to the room and sleep. But what about dinner? The quick choice we could think of was Noodles. It's an Asian restaurant where you can order and eat quick- casual dining. But of course, being in Bellagio, all the prices were inflated compared to what you would see in Asian restaurants in California, just like every other hotel on the Strip with Asian food. 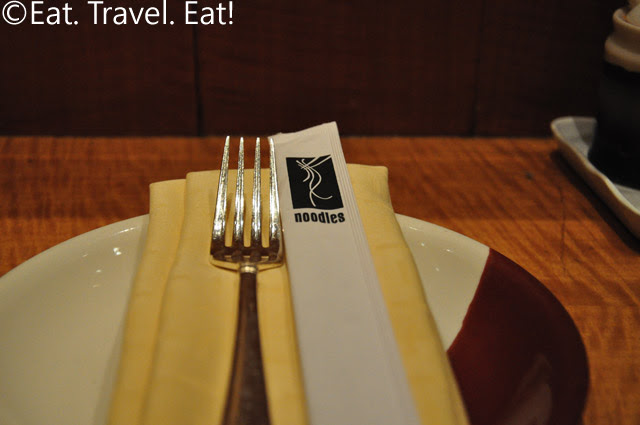 We were seated at what they called the bar area, instead of a table. The restaurant was filled with family and visitors. To the sides were condiments as well as toothpicks and the like. 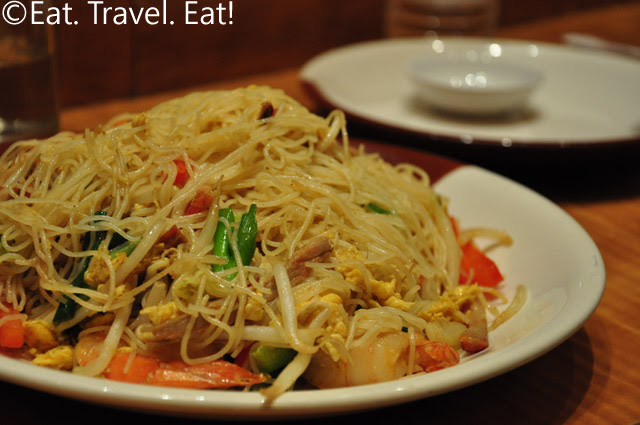 Ordering was quite quick and easy. The employees spoke Mandarin and/or Cantonese which was excellent and a good thought for being an Asian restaurant on the strip that serves mostly authentic Asian food. Our server was friendly if not a bit quick in terms of service but that is usual for Chinese restaurants (unless you are at a really high end one). My companion ordered the Singapore Curry Rice Vermicelli (18 USD), which looked excellent and did taste quite good. My other companion tried it and liked it too. I didn't try it as I was sick and didn't want to eat. What can I tell you? Look at the photo. The shrimps look high quality. And that screams good! If the shrimps can be good, then the rest is good. :) (Most places that serve so-so versions have bad shrimp) 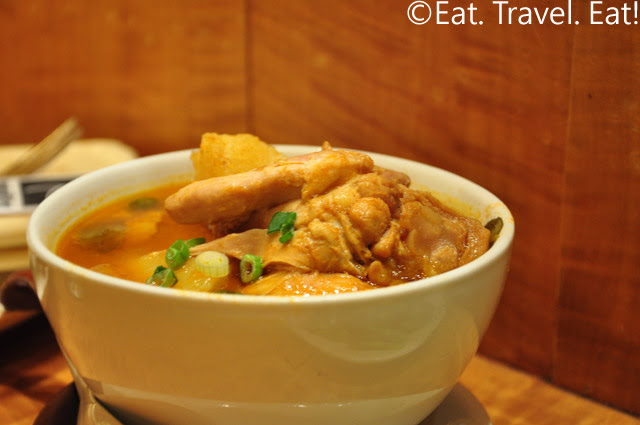 The Chicken Curry (15 USD) was something my other companion was surprised at. She was expecting a curry similar to Tasty Garden's or President Thai's version but this was completely different. The curry had tons of oil on top like what you see on Rasa Malaysia/Nyonya Food. My dining companion did not really like this curry. Very straight up, no coconut milk. The chicken was so so either- very mushy, which meant it was not fresh. My companions ended up eating the curry with the rice but left the chicken alone. Mushy chicken= not fresh, which is not nutritious for your body anyway. 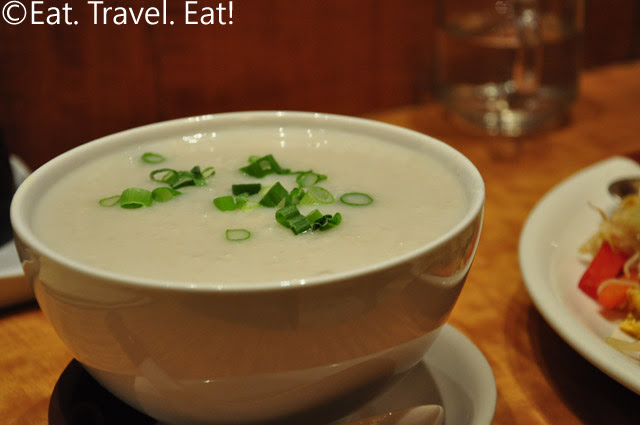 I had the Century Egg and Pork Porridge (13 USD), which was evidently cooked in a pressure cooker. And that said, the porridge was quite excellent. The rice was cooked into little pieces and the congee was ultra smooth and thick. The century egg and pork were placed all in the bottom, with the porridge poured on top. The century eggs were just cut into cubes and put into the bowl, not warmed or cooked like at Full House. The pork was shredded and was good, other than the fact that it was oversalted! Overall, it was a very nice porridge. It would have been even better if the pork was not oversalted. 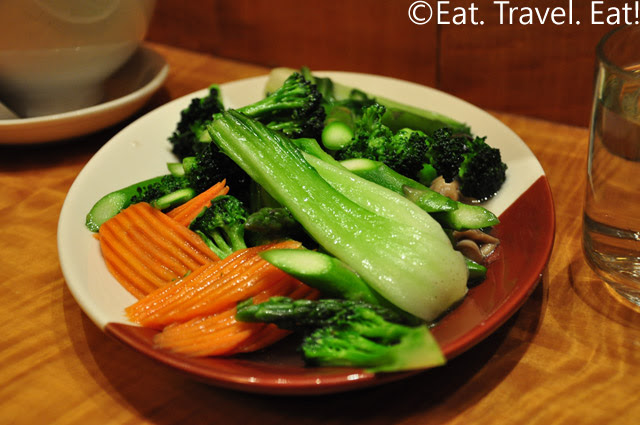 The Mixed Vegetables (14 USD) was a simple stir fry of garlic, broccoli, asparagus, carrots, bok choy, and mushrooms. The broccoli was a tad bitter but otherwise it was what the description I wrote :). But I kind of expect more when paying so much, even if they have to make it "pedestrian" for all people to eat. As you'll find out on a later post, lunch the next day had a mixed vegetable plate that was 1/3 the cost but had much more ingredients in it!

Overall, it is an OK choice if you have to go due to special circumstances or convenience, but otherwise it is much, much better to go off strip to Chinatown for Chinese food, or going to places like Pearl or Studio Wok (all at MGM) which serve good food for the cost. Prices here are inflated by at least 200% to 500% compared to the San Gabriel Valley where Chinese food is plentiful. That's the Hotel standard for Chinese restaurants. And even at the price, not all the food was at least tasty (unlike Studio Wok or Pearl) so I don't really recommend to come here if you have other places you still want to try. Also, order Noodle items. There is a reason the place is called "Noodles"! The executive chef on the Bellagio channel (in room) said the wonton noodle soup is worth trying out (apparently they have to make at least 2000 wontons a day!). I would have tried it out, but shrimp when you are really, really sick is pretty much a no-go. I love the chef video (his history is just like mine, with all the cooking as a child stuff!), but the food (mainly talking about the curry and the veggies) could be better especially when you are paying this much. :)

Next up? The famous Bellagio fountains! And then, Capital Seafood/Pho Vietnam, our lunch spot and where I finally started to feel better after getting some Chinese herbal medicine.

Protocol Snow said…
Yeah, prices are inflated but Noodles is worth the convenience since I'm typically in Bellagio fairly often on Vegas trips.

When I was younger, my family would always go off-strip to Chinatown since the prices are so much better, but I haven't been there in the last 7-8 years. A little too out of the way.

ETE -- I agree, order noodle items! Their beef noodle soup isn't the traditional Chinese/Taiwanese style so I didn't like it, but most of their other noodle dishes are great.
April 27, 2010

EatTravelEat said…
tigerfish,
Yep! Especially when there are no special veggies in it. :(

Protocol Snow,
Yeah, it's pretty much a convenience! I still go to Chinatown as we usually restock on water and other items since we have a car.
April 27, 2010

Dave said…
The veggies look like a side rather than an actual entree. And the chicken curry looks soggy.

Cookie Chomper,
First time eating at Noodles for me! Chinese food in Vegas seems to taste good after a while of not eating Chinese food. Although, on this trip I had Chinese food for the first half of the trip...so not as much.

Dave,
Yup! Probably just as large as a plate at Phoenix (maybe even smaller). Curry wasn't that great, but that photo was a bit blurry. My hands kept shaking everywhere I went!
April 28, 2010