May 05, 2010
After watching the Fountains of Bellagio at 6 in the morning, I did not realize that I would doze off to almost midday! That was very unusual of me as I am the early riser who wants to go out to see things, eat, and get as much as I can out of my vacation while also relaxing. But the fever took over me. After all, it had gotten worse, and the fact that Las Vegas' climate was hotter and drier did not help either.

So, it was decided. Healthy, light food for the rest of the day until I felt better. Where else to go for that? Chinatown Plaza! Plus, I could buy some different medicine there. After buying it and taking the medication it was time to find a place to eat. Now where would that be? 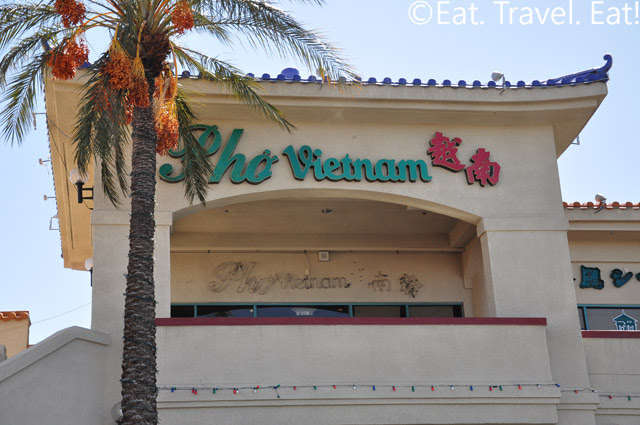 We had a desire for Vietnamese food so we went to Pho Vietnam. We did want to visit other restaurants, including our favorite Yunnan Garden, but after seeing that Pho Vietnam was the one that had the most customers in Chinatown Plaza plus the fact we were lazy to drive, we decided on Pho Vietnam. Up the stairs we went! 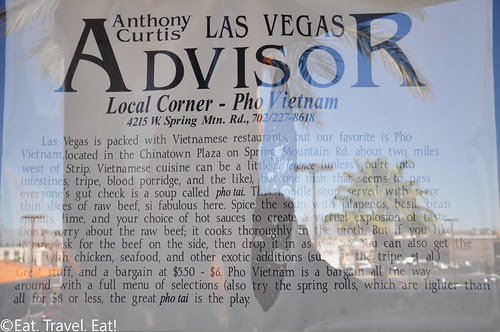 Besides, there was even an article by Anthony Curtis of the Las Vegas Advisor on it. A bit old, as the prices were not the same as they were during our visit, but still a recommendation.

However, the door to Pho Vietnam was locked. There was a sign that said to go to the door to the right. 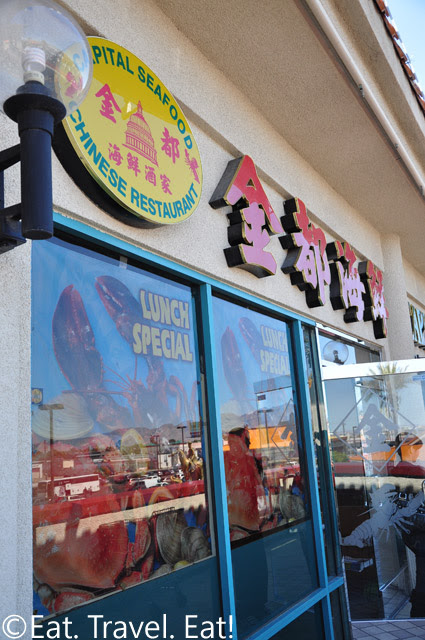 But that door was Capital Seafood's door! So what did that mean? Both were a combination restaurant. Thus, it meant you could order food from Capital Seafood as well as Pho Vietnam. Awesome! Just like in Arcadia where you can order lunch specials and dim sum, here it was Vietnamese food and Capital Seafood lunch specials (didn't see dim sum available). Capital if you haven't noticed, is great at combining two concepts into one. :) 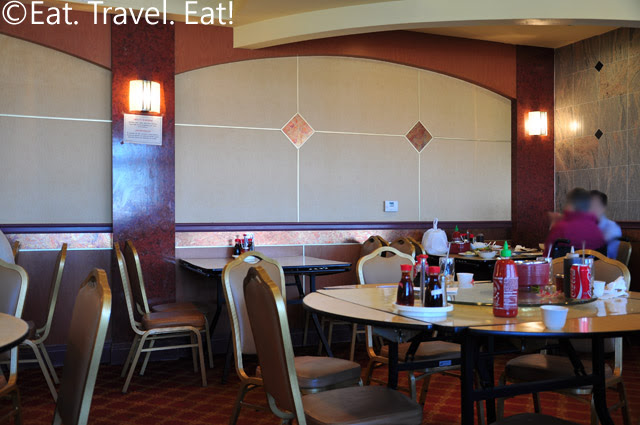 We were seated at the Capital Seafood side by the lone Vietnamese/Cantonese speaking manager. No, it definitely was not as nice as Arcadia's version of Capital Seafood or even Monterey Park's version, but it was OK. Not fancy but pretty clean. 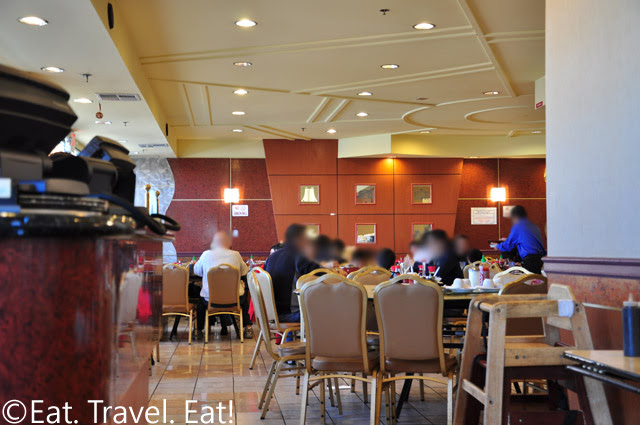 Here is the Pho Vietnam side. This photo makes it looks much nicer than it actually is as the kitchen/serving area is hidden, which is all industrial looking a la Sam Woo's serving counter.
We ordered from both sides of the menu, but what shocked us was how affordable everything was, especially the Capital Seafood side. 4.95 for one dish of food? Awesome value! 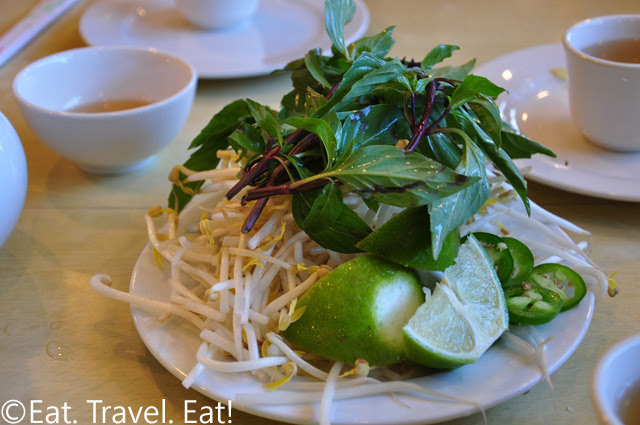 A plate of fresh bean sprouts, jalepenos, and various herbs arrived at our table while we arriving for our food, and... 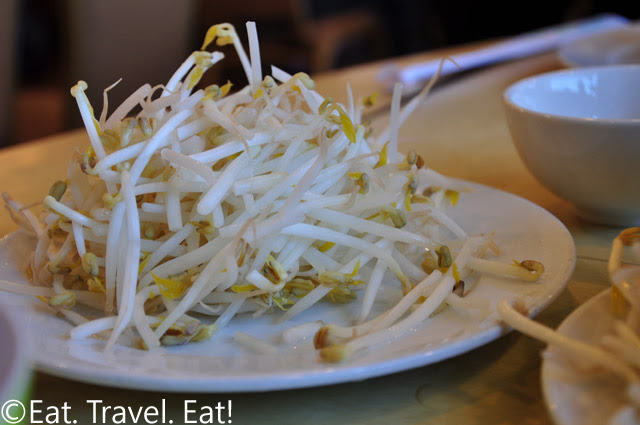 ...since we wanted some blanched bean sprouts, a separate plate of them came to our table. Just quickly cooked in hot boiling water, nothing else. 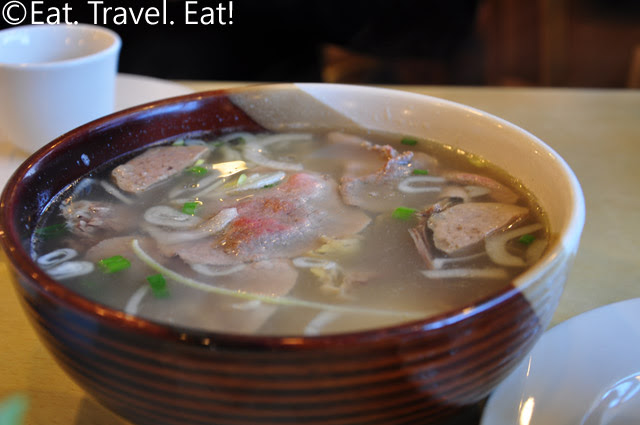 Our bowl of pho dac biet from the Pho Vietnam side of the menu (6.95 USD) arrived first. I shared this with one of my companions as I knew I did not have a big appetite for food just yet (it got better during dinner though!). This was a pleasant bowl of pho. Big clump of chewy rice noodles, flavorful beef broth without too much MSG, and there were plenty of beef and meatballs. Not the best pho I've ever had (that would be Vietnam House or Golden Deli but I haven't had pho in quite a while now!) but this was pretty good. Plenty to share too! 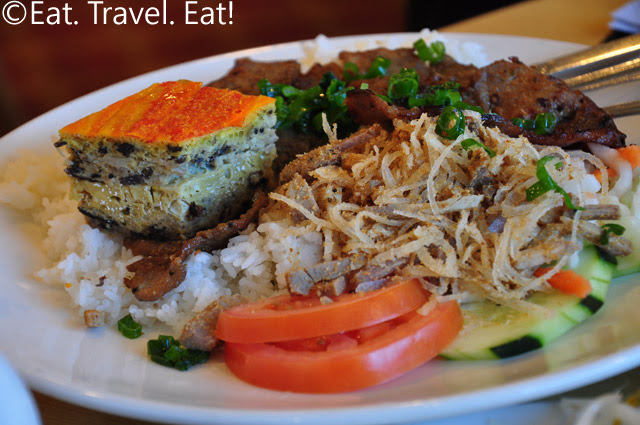 My other companion ordered the broken rice with pig skin, egg custard, and charbroiled pork (guessed translation is Com Tam Suon Bi Cha). It came with a bowl of nuoc mam cham ngot, a sweetened fish sauce which also had some shredded carrot and daikon as a bonus. My companion thought of this as pretty good but places like Golden Deli served a better rendition in his book. 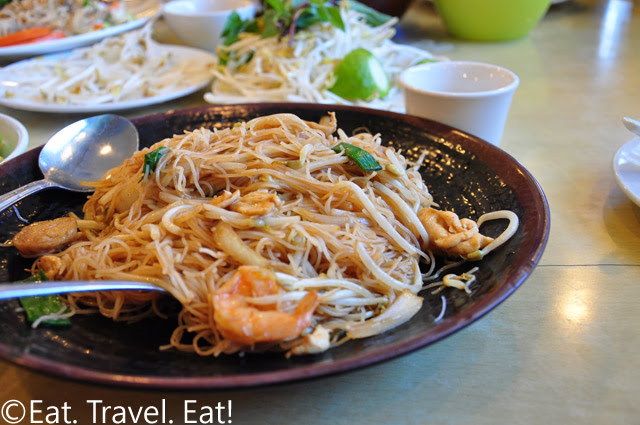 We also ordered a plate of House Stir Fried Noodles (6.95USD) just in case if we did not have enough to eat and for me just in case if I felt better. Nevertheless this got eaten up during lunch and not afterwards! 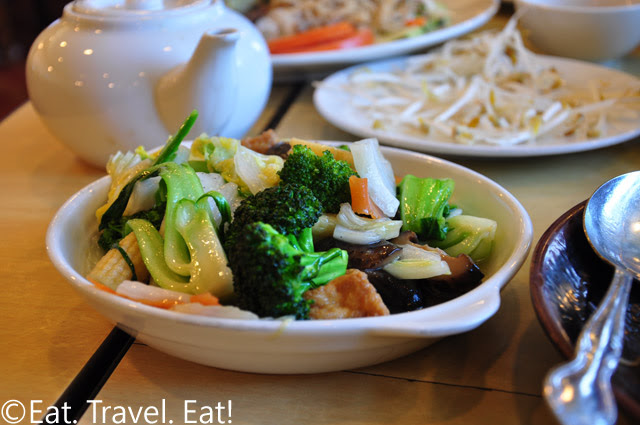 And since a meal should contain plenty of vegetables, we ordered the Veggie Delight (4.95 USD), basically a mixed vegetable plate. This one beat Noodles' version completely, with plenty of bok choy, broccoli, baby corn, fried tofu, mushrooms, cabbage, carrots, and even a bit of mountain yam. A whole lot more variation and a bigger serving for one thirds the price, and prepared even better compared to Noodles. What more do you want?

At the end of the meal we did not get any fortune cookies, but other people (a racial issue) did. I think this follows quite well to the Mandarin Noodle Deli story I told about with the elderly person wanting fortune cookies?

But for a story from this place, there was a couple who came, dressed very nicely. The wife spoke excellent Cantonese with a good accent while ordering her food, and she was not Chinese. It's not often you see that happen! Even in Hong Kong there are only a few people who are not Chinese that can speak excellent Cantonese. Stereotype for sure but it is quite unusual to see such great talent! 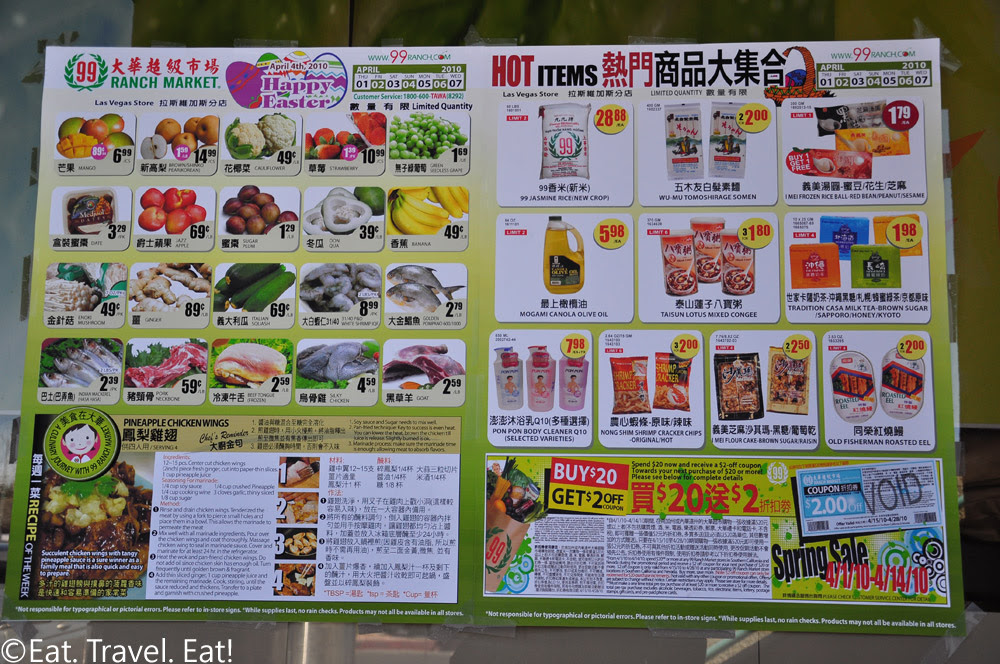 Anyway, we went to the 99 Ranch Market next to see what we wanted to buy. What was impressive though were the good deals available at the market- many even better compared to California! Enoki mushrooms for 49 cents? Ginger for 89 cents? Great bargain! 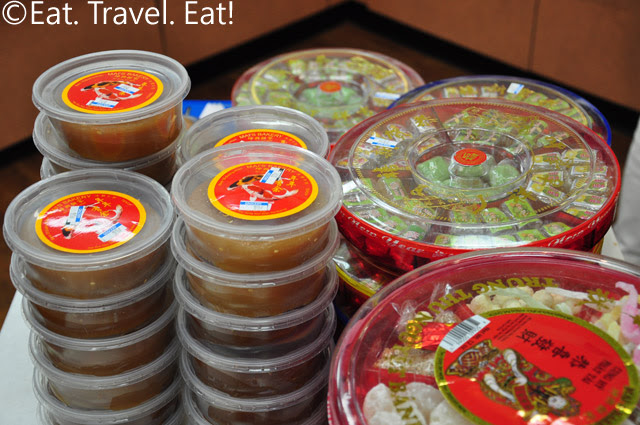 I was surprised at the fact that even almost two months later, Chinese New Year foods were still in stock in Las Vegas. What was even more surprising was that all the items were from California! The same exact brands available in the 99 Ranch Market in Arcadia! I wonder who drives the car to ship these items over to Las Vegas. Not as big of a selection here, but it's here! The Chinese New Year Rice Cakes were on sale, with a two dollar discount from 2.99 to 99 cents. Not very fresh looking though. 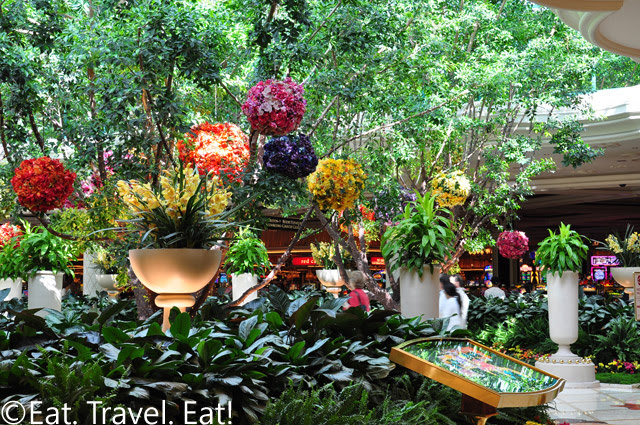 Afterwards, we went to the Fashion Show Mall to look around, and watched the iPad frenzy at the Apple Store! Employees wiped iPads with microfiber cloths and held discussions on how to use the iPad. The comments I replied to on Capital Seafood were done on the iPad too on the same day :). Then, we went to Wynn Las Vegas to visit and shop. Since I was not buying anything, I strolled around to see what I could take pictures of. I wanted to take a picture of the pathway where you see people walking through in the photo, but there were just too many people!

We then went back to the Bellagio with a plan for dinner. Aureole, the best dinner (excluding Asian food) of the year! But before we did, we also visited the Conservatory at Bellagio. That post is next.

EatTravelEat said…
Ravenous Couple,
Definitely! :) Very fresh looking too. I haven't had a Vietnamese rice plate in a while now and I want one.
May 08, 2010