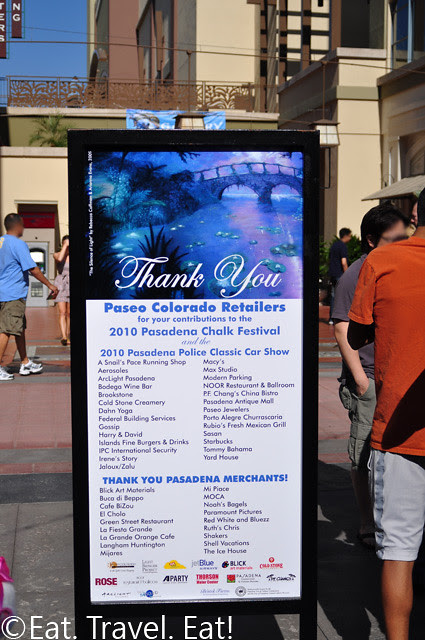 Sometimes we stumble onto an event, and the previous weekend was no exception. Our plan was to go to the Glendale Galleria to shop around. We did, and had mini chocolate cupcakes for free at Nordstroms and had a late lunch of a meatball sub at Subway. I spent the rest of the visit listening to the dusty (on the inside) and tattered (no serial # and side logo plucked off :[ ), but a very nice sounding Steinway & Sons Model B Piano at Nordstroms. The highlight of the visit, as always as it seems these days when I visit any mall and happen to drop by Nordstroms.

Thankfully only because there was a pianist! Nordstroms always used to have someone tickling the ivories (AKA playing the piano) everyday on a Steinway at Arcadia, Glendale, and Costa Mesa, but now it seems to be getting rarer and rarer. So it's off to listen to the music rather than shop. Nor does the music get pumped off the speakers anymore. Too bad, because the music played by any person Nordstroms employs plays famous tunes- and some of them play pieces memorized and you can even request them to play something! Seniors and kids particularly enjoy the music- as well as the Steinway itself. 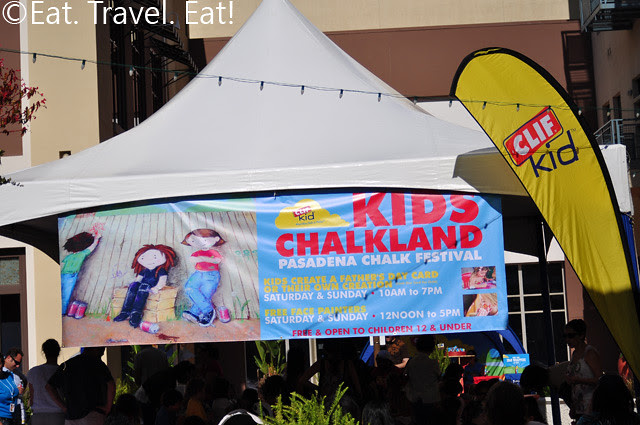 Anyway, we went back towards Pasadena so we could visit Paseo Colorado for some more shopping. What we did not know was that there was an event going on. Passing by Colorado Boulevard to enter the parking garage, there was a frenzy of activity, and tons of sunshades. Going up the escalator, our thoughts were confirmed: a chalk festival was taking place.

After our parking ticket was stamped at Macy's, we shopped and headed off to admire at the art people were making. 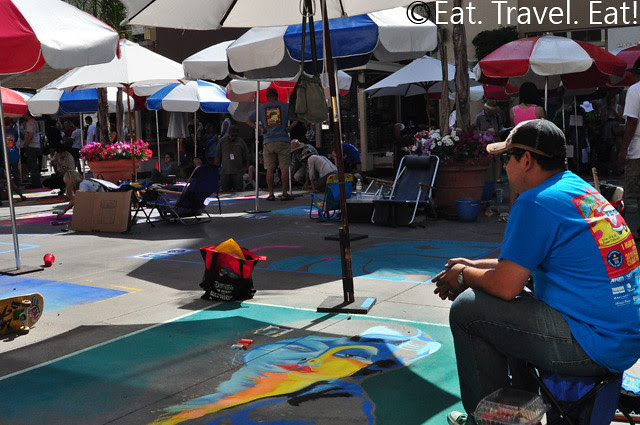 Each artist/group had their own section taped off for them to draw on, and the topics they drew about were very different. Some were about nature, while some were about people. In this picture, you see an artist taking a break. How relaxing. 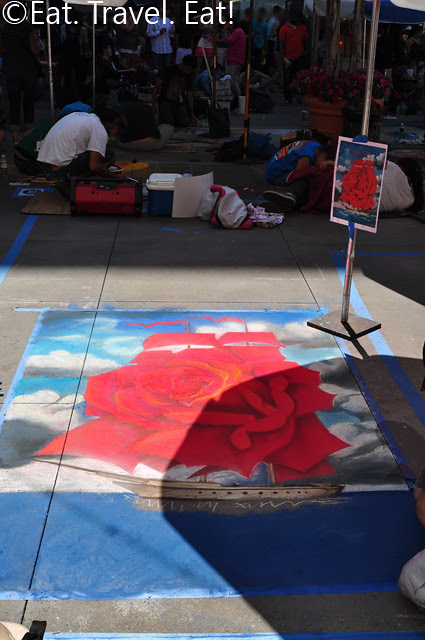 Since I had some accidental problems with my settings as I wasn't careful enough I had to leave and return to some drawings that I had took pictures of. So, the next blog-worthy picture was this rose, which is actually a ship if you look closer. And you also see the printed drawing compared to the chalk drawing. Very nice, no? It won best Original Design and was by Brad Street who called it "Rose Afloat." 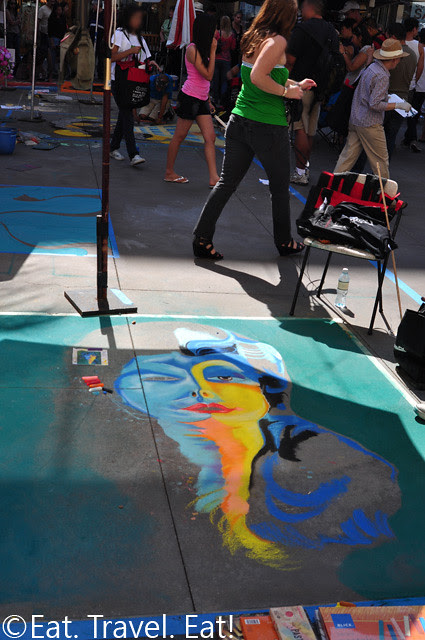 Then I went back to the drawing that I took a picture of before. It's probably not totally finished yet, but it already looked like a beautiful piece of art. Others agreed, as they came in with their cameras- cellphones, P&S, DSLRS, and big DSLRs with an external flash to take a picture. 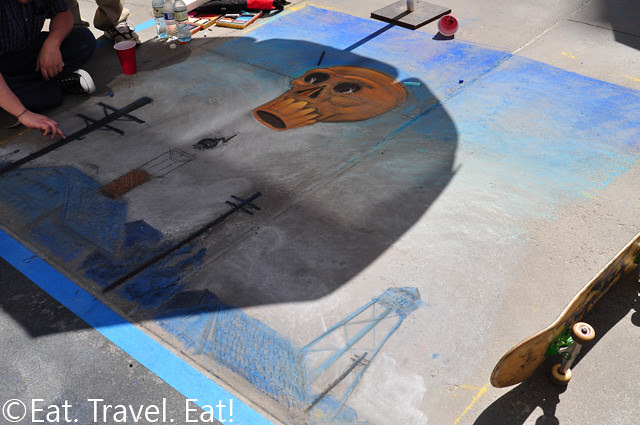 Something nearby was a hot air balloon drawn as a skull. How creative! The skateboard makes it even more interesting. 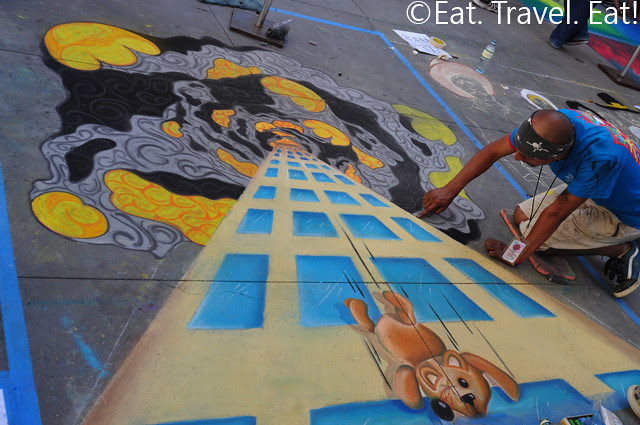 OH NO! The teddy bear is falling from the building catching on fire! And the artist is busy making the smoke look even more fantastic? What will we do? Just kidding. :) Obviously, a very humorous drawing. Christopher Ocampo, who made this drawing and called it "I Hate My Job", won the award for being Most Humorous. 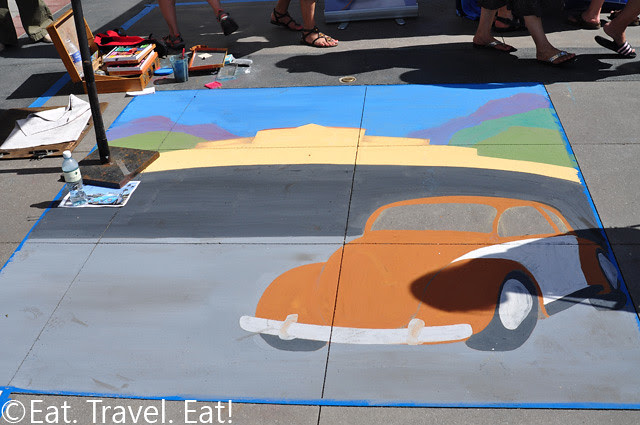 Something less dramatic is this happy scene of a Volkswagen like Beetle car which seems to be enjoying the sunny afternoon. 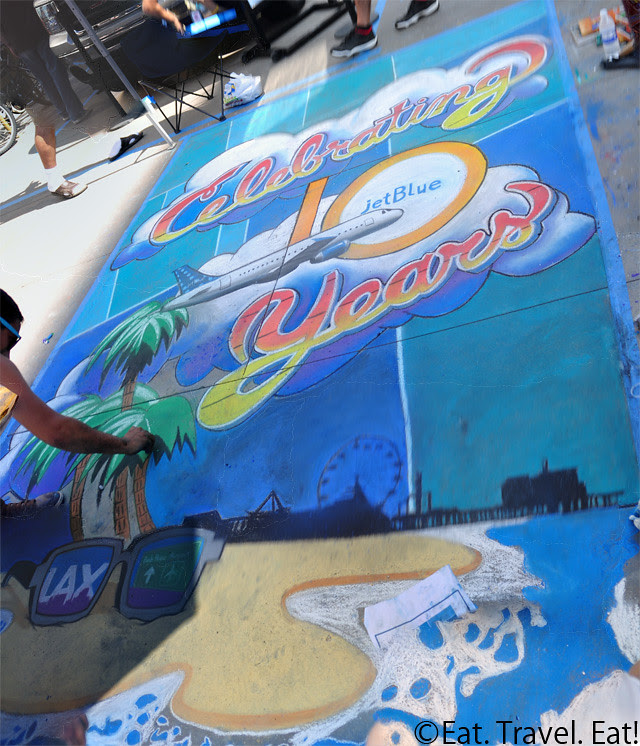 One of the bigger drawings was one by JetBlue, who was promoting their 10th anniversary. As you may or may not know, I like Jetblue. (Jetblue BOS- LGB, Jetblue LGB- BOS) And the past weekend they had a raffle for two roundtrip tickets. As for the winners, I do not know who won. But I do know this drawing took plenty of effort by a group of guys who spent hours to perfect the drawing! And the fact I took 16 pictures of it and stitched them into this. Thank you, Photomerge in CS4. (YAY) 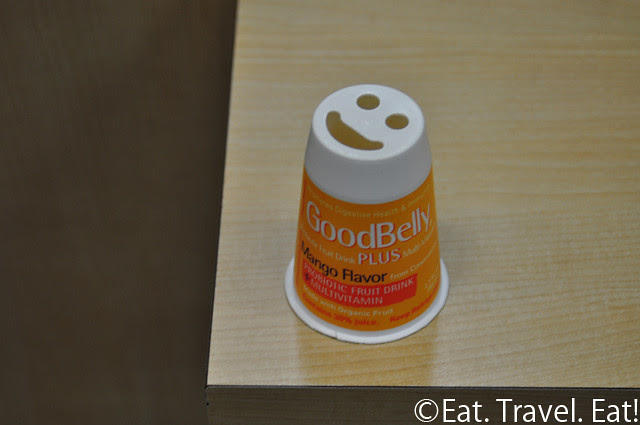 I headed off to Loehmanns to check out if there was anything interesting discounts available, and on the street there were several people handing out samples of Good Belly Plus Probiotic Fruit Drink in mango flavor. This was interesting, as it had quite a number of vitamins, juice concentrates, plus things like oat flour in it. Together there was a combination of fruit and oat flavor, with the mango standing out. Pretty interesting. Just like that smile you see on top of the container.

The funny thing was at check out. Someone had a 20% off coupon, and people wondered where she got it. What did she do? She gave the coupon to them. Hmm...and came back with another coupon. Then the chain started to spread. People went to get the coupon for others and in the end probably 10 people had the coupon. Where were the coupons? They were unguarded on the floor at an unmanned register. Obviously the manager noticed later on but it was already too late to make them unvalid. The coupons just went closer to her, where people could not take them away. 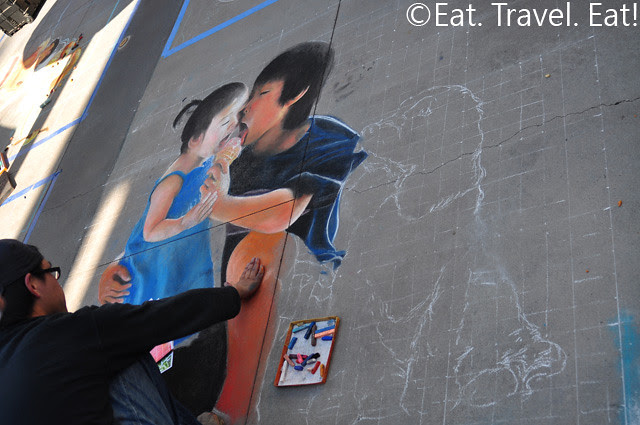 Walking back out after having enjoyed the air conditioning inside, there was a cute picture of kids eating ice cream and a dog to look at. This drawing was not complete at the time, so I went to take a closer look. Looking at the Chalk Festival website, this actually won an award. Shuji Nishimura's "We Love Ice Cream" won Best of Silent Auction and Best Technique. The final drawing is SO IMPRESSIVE! 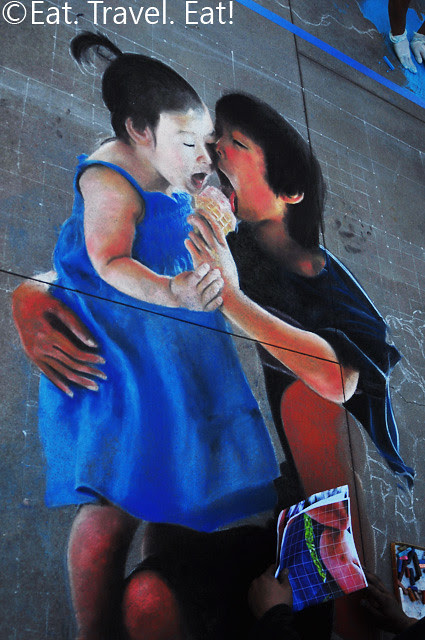 Aren't these kids just so cute? The boy to the right looks like someone I would know. And this photo was saved thanks again to Photoshop (since it was in Manual mode accidentally). 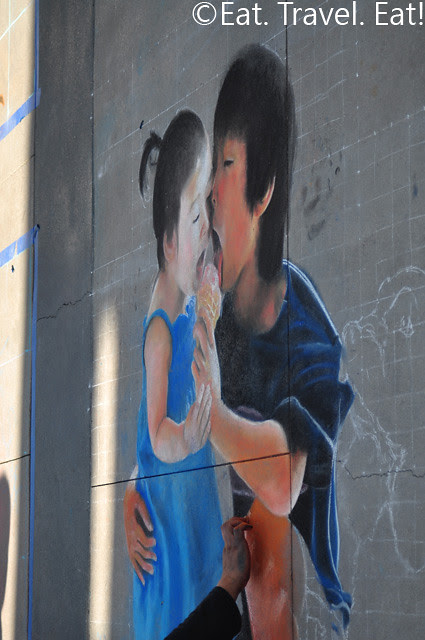 To compensate I took another picture but this time from another side. Again, very cute kids. 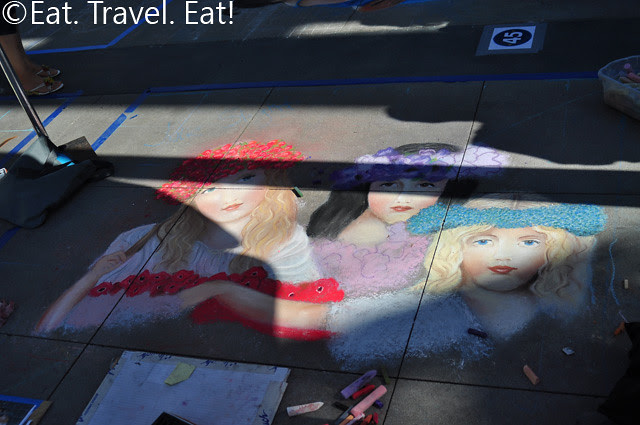 Nearby was a nice drawing of ladies dressed in a very prim and proper style of the old days. 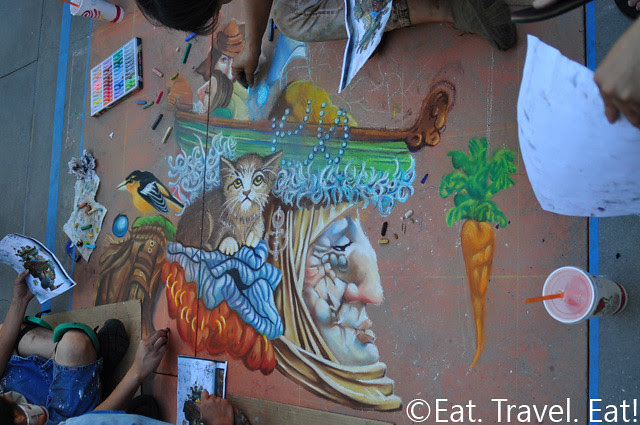 Plus there was a beautiful cat too. Doesn't it seem to stand out from all the other elements in the drawing? The complete drawing, by Brittany Lee, called "The Burden of the Responsible Man" won Best of Festival - Second Place, and People's Choice Award. 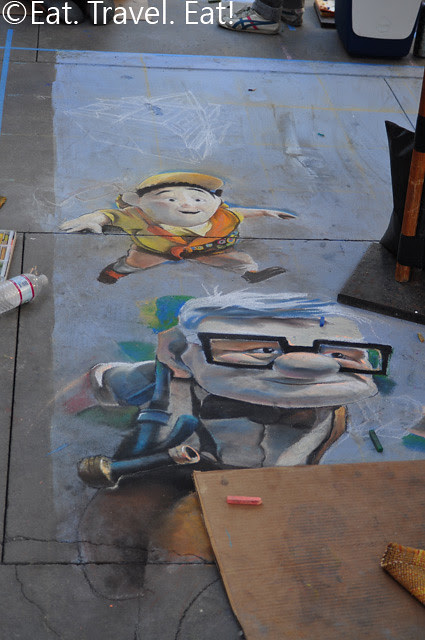 Nearby was another drawing, definitely resembling the characters from Up!: Russell and Carl. 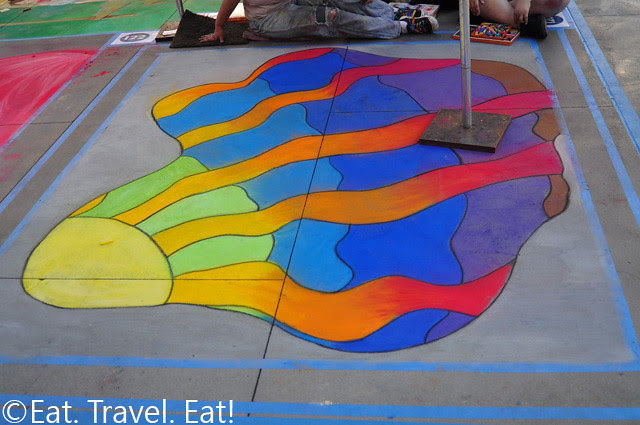 As well as a simple picture of a sun with many colors of light nearby. 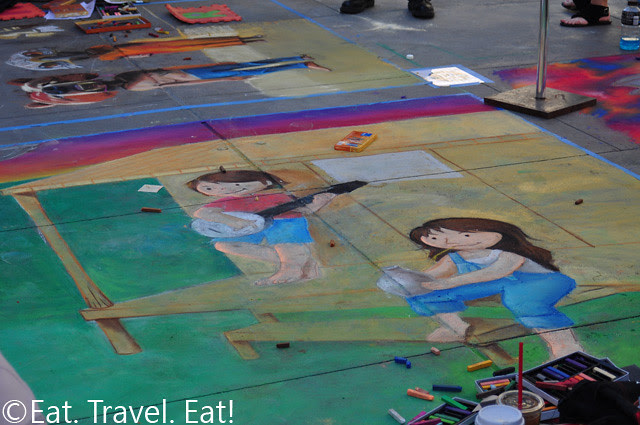 To end the post, here is a drawing that my companion liked of kids playing on instruments on the porch of their home. These kids look very familiar but I don't remember if it came from some movie or book...

Anyway, hope you enjoyed the many drawings that the artists were busily working on all afternoon. I wonder how Paseo Colorado looks now. They should just make these drawings permanent! And obviously, these are just a few drawings. There were much more drawings, as well as an entertainment stage and cars too. And evidently, this event won a Guinness World Record for the Largest Display of Chalk Pavement Art!

imjustatree said…
first! haha. great post. those are all pretty amazing. i took art classes before, but i was pretty hopeless student
June 28, 2010

Anonymous said…
that is cool! I remember this, but the thought of Pasadena traffic killed any intentions of going. thanks for the pix. how was the mango yogurt drink? more importantly, how many grams of protein does it have?
June 30, 2010

EatTravelEat said…
Sawyer,
First! In almost two weeks! Yay! I used to take classes, but the place I went to closed suddenly. Guess where?

Sinosoul,
Yeah, traffic was worse than normal. 15 minutes approx from Rusnak Pasadena to the festival. Don't know about the protein in the drink. It's okay tasting but for me I'd rather get my supplements from pieces of food and not a drink.
June 30, 2010

dining sets said…
I do drawing but I can do chalk. It is hard for me to combine colors like every does. Those chalk drawing are unbelievable. I wish I can do that too.
July 02, 2010