The Buffet at Bellagio- Las Vegas 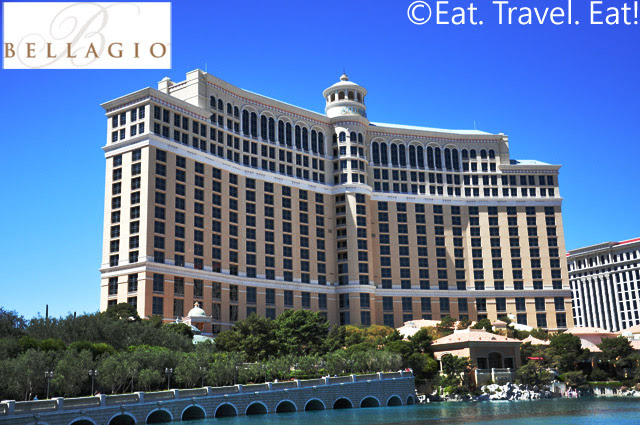 Breakfast. Who knew at 10A.M. that so many people would be lining up? Snake patterns? Why? Anyway, since I was feeling better, I'd say we should take part in this breakfast frenzy. But where at? Cafe Bellagio was close, but the prices seemed so close to the Buffet price I would rather get the Buffet instead. Besides, a trip to Las Vegas requires a buffet visit, even if I am sick. Off we went. 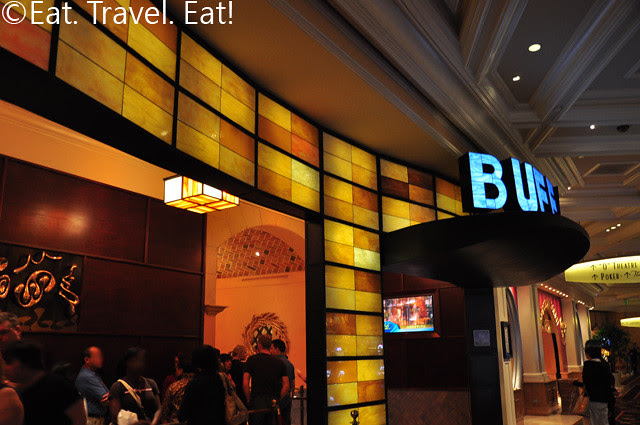 The Buffet was hidden in the casino- far from the lobby, far from the VIP and Executive Club Lounges. But what shocked me was this exterior. 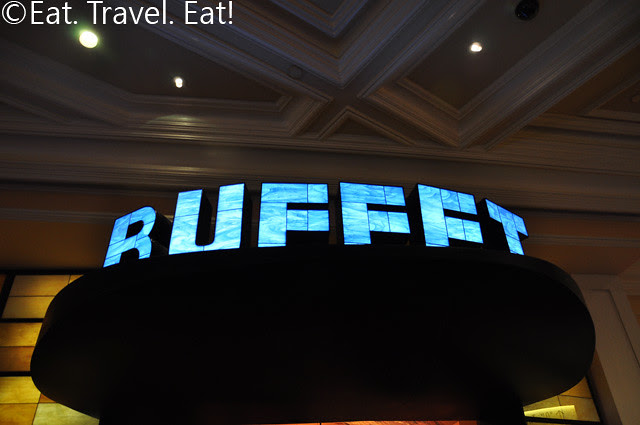 My memory from 5 years ago about this place: A pretty, elegant buffet with golden watermelon (WOW!). This looked quite the opposite. But what was hidden from the typical modern look of most buffets was still the actual, good buffet from years past.

Unlike last time however, this time we zipped through the line with a line pass which that itself even had NO line at all. People in the regular line probably waited for another 30 minutes. Which is exactly why we were prompted by a customer in the regular line about to be released to pay for the meal.

"Where do you get this?"

Well, the employee working the lines made this all into a joke while I was thinking of a response. "MONEY, MONEY, MONEY! $$$! " All with a happy smile. 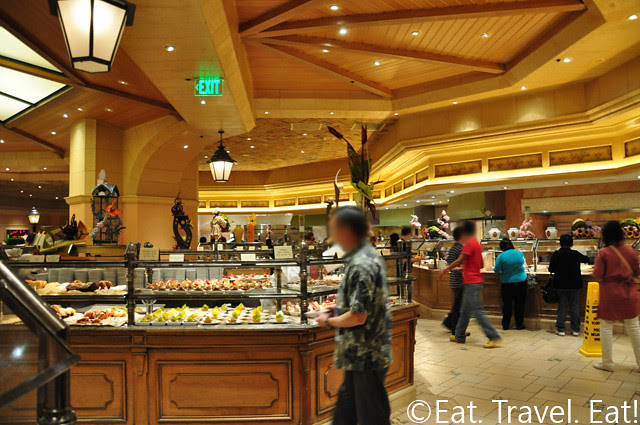 What a silly response! Someone's having an enjoyable time at work. We were released then, and after paying 16 USD per person for breakfast, we were brought to our table. Not knowing the price beforehand, I was pleasantly surprised. Wynn costs much more, but yet both the Bellagio and the Wynn have buffets that are "top of the line." Comparing prices, the Aria and the Mirage have similar costs within three dollars for breakfast, lunch, and dinner (exception Mirage having 12.50 breakfast). I think I would take Bellagio over those any day. 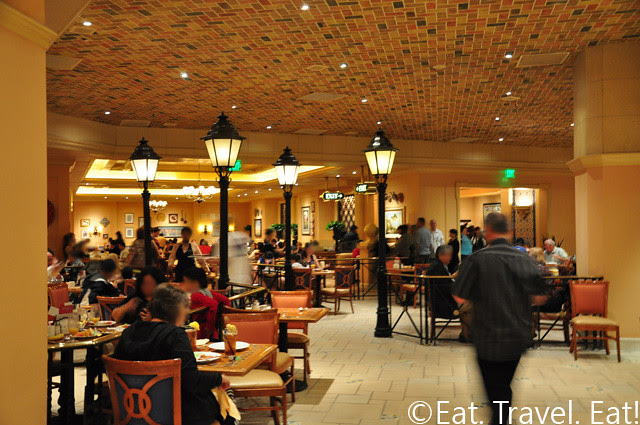 The bad part? Deep yellow lighting in our spot. However, it was well decorated with a screen for Keno that was on break and plenty of drawings. People seated outside got better lighting but also more foot traffic. 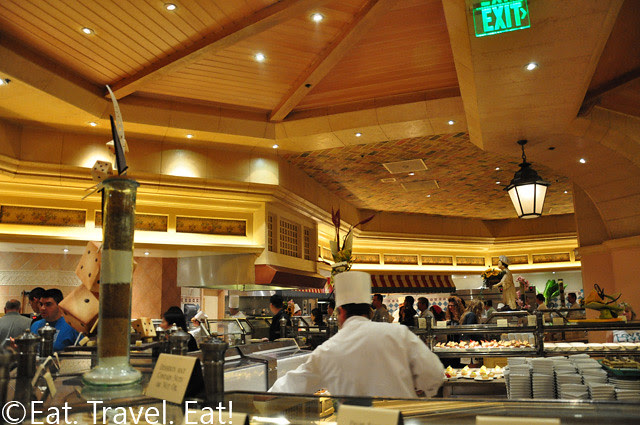 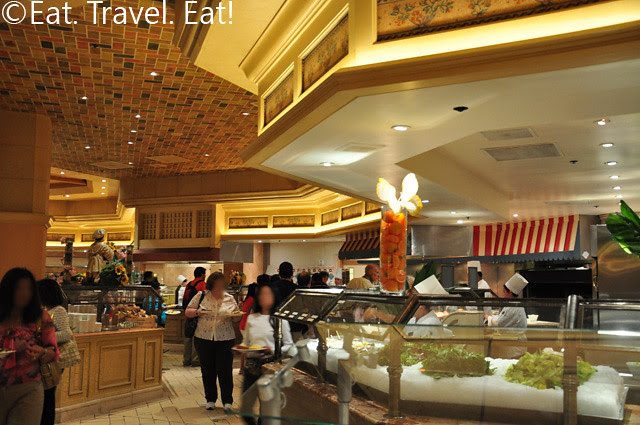 After telling our server what drinks we wanted, which ranged from green tea to soymilk and milk to orange juice, we went off. My first stop was at the Asian section of the buffet. 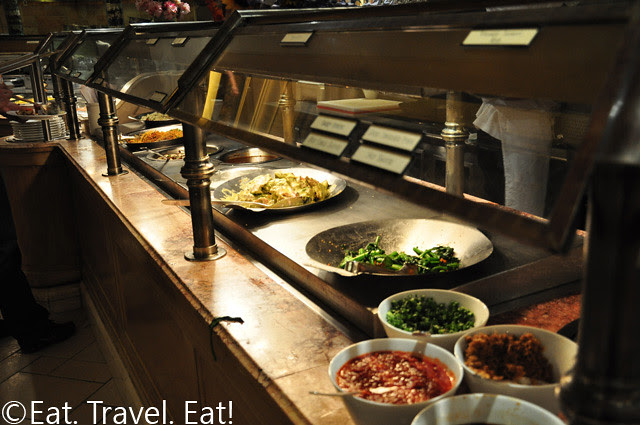 There was quite a large variety. Other than your usual chow mein, fried rice and orange chicken, there were also stir fried vegetables, duck green curry, and congee. And of course, I picked up items similar to what I had at Noodles the past day to make a comparison. 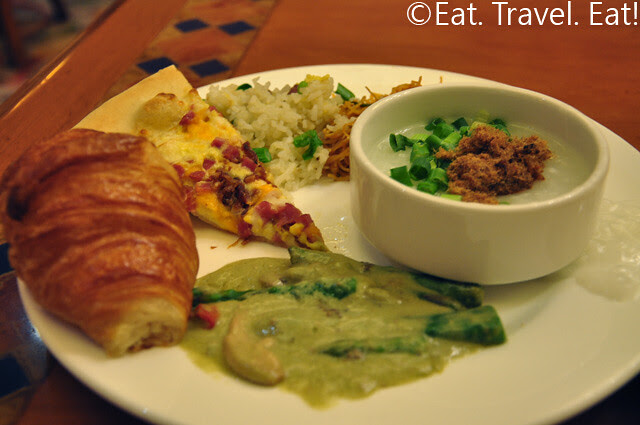 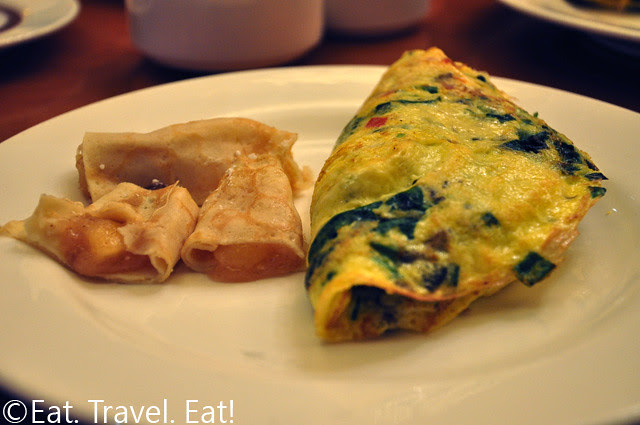 After my second plate I headed off to the omelet station where there was a long queue but friendly employees and visitors, some which even noticed my camera. My omelet was simple, with lots of veggies. However, if you wanted to go the fancy route you can also get almost anything you wanted as well as some notables: crab meat and shrimp. Lots of people also asked for poached eggs, and yes those were also available as well from the kitchen. As for the taste, it was a nice hearty omelet that was tender on the inside and not overcooked.

To the side were some apple crepes which had a nice thin crepe skin and an apple filling with a hint of cinnamon, as well as a cheese blintz which had the same pleasant thin crepe skin but with a creamy sweet cheese filling as what you would see in a cheese danish. 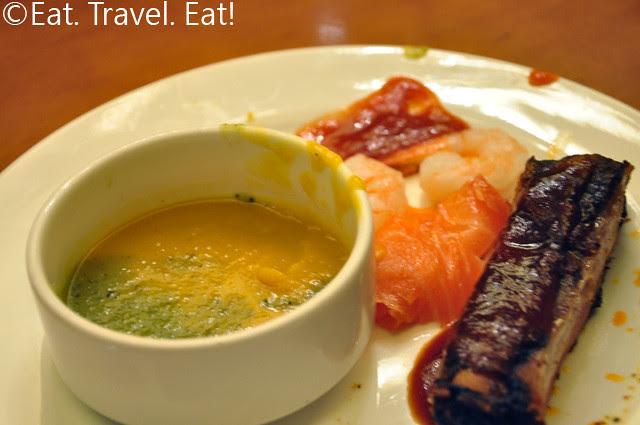 My fourth plate of food had stuff from the lunch menu since we arrived about an half hour before lunch started. I got a beef rib (lunch), two soups (lunch, replaces oatmeal), smoked salmon (breakfast), and some cocktail shrimp (?). The beef rib was quite tender if not a bit charred, with the BBQ sauce complementing it while not being overly sweet like some BBQ sauces are. One of the soups in the bowl was a butternut squash puree, the other I can't remember but it was quite interesting. As for the cocktail shrimp, they were fresh and crisp (the shrimp), and the smoked salmon was normal, cut to medium thin slices. 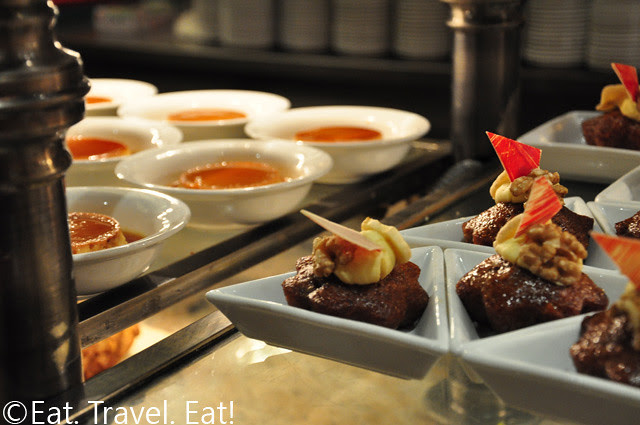 After all the food, I walked some of it off by taking pictures of the dessert section, where there were little people since it was breakfast and early lunch. The other sections all had plenty of foot traffic so I didn't take pictures. 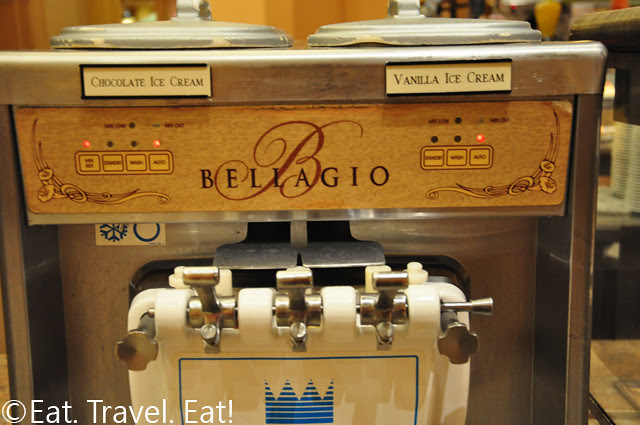 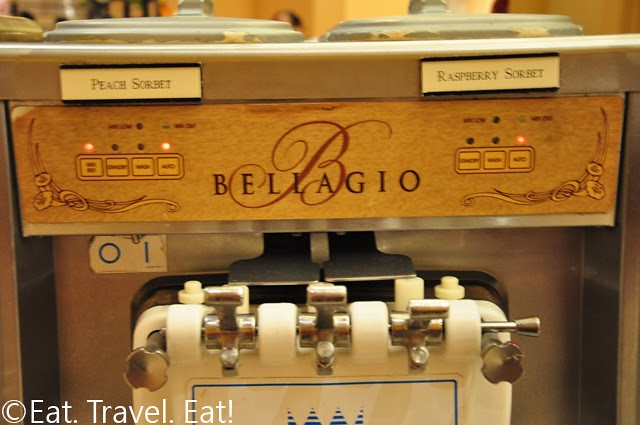 Here are the ice cream machines on opposite ends of the dessert section. 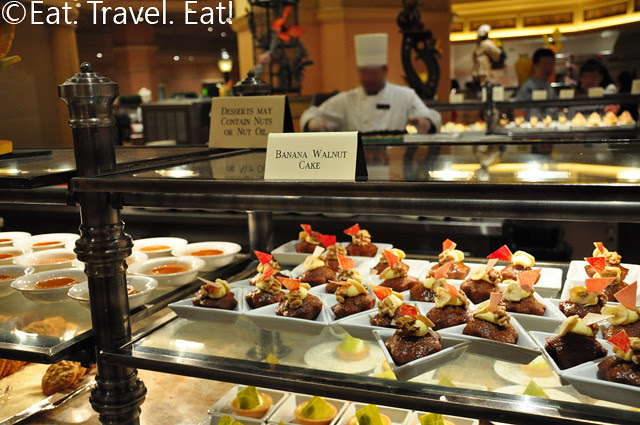 Here's a wider look at the earlier photo with the flan and the banana walnut cake. 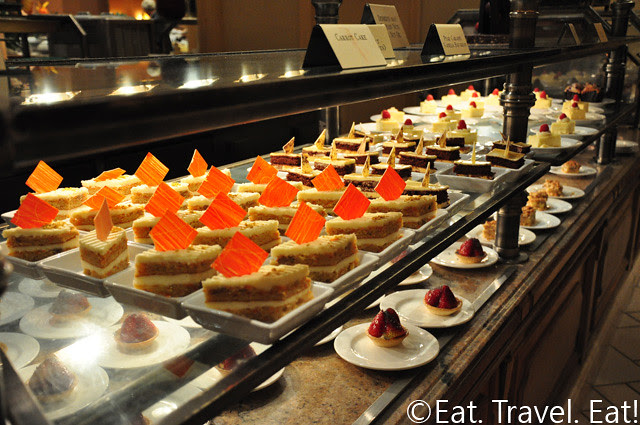 Moving on we have a carrot cake, fruit tart, a low calorie cheesecake, and some other desserts. 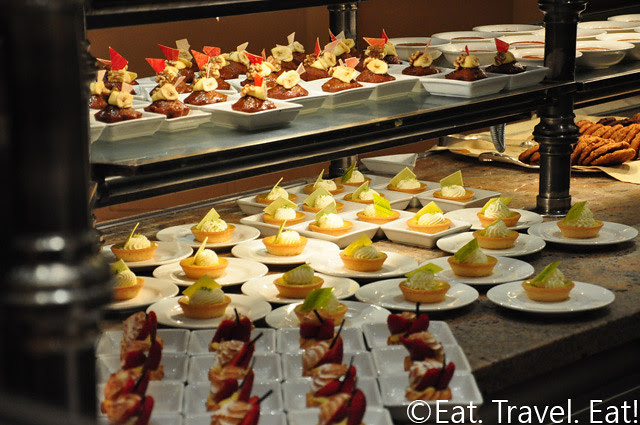 Here's another shot of the same area, but showing the back of the racks. 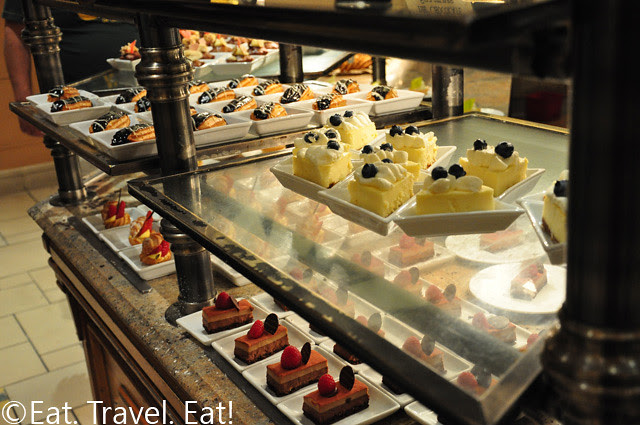 And cheesecake and eclairs.

And for a fuller view, a video. I'm noticing I always am moving way too quickly in these videos. You can't even see the food easily since it's all a blur! Manual focusing on a D90, as usual. 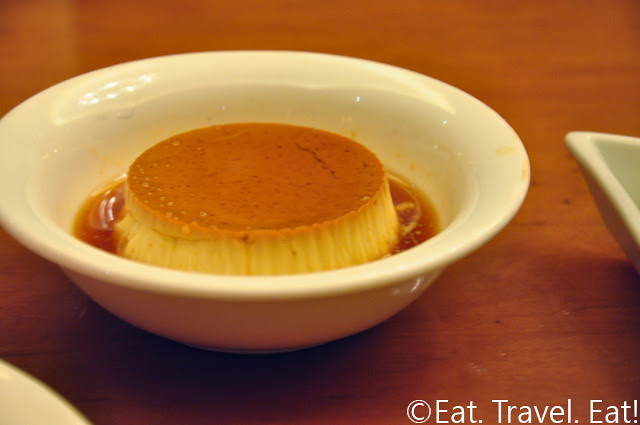 What did I get out of all of these desserts? A LOT. I wanted to share too, but I ended up eating most of them.

This, as you can see, is a flan. One of my favorites at the Wynn buffet, this was also very good, with a very creamy texture and a light sweetness. However, during May, I had a even creamier and richer flan that was made by a student for Spanish class. That one was awesome. This one, was quite pleasant for a flan. 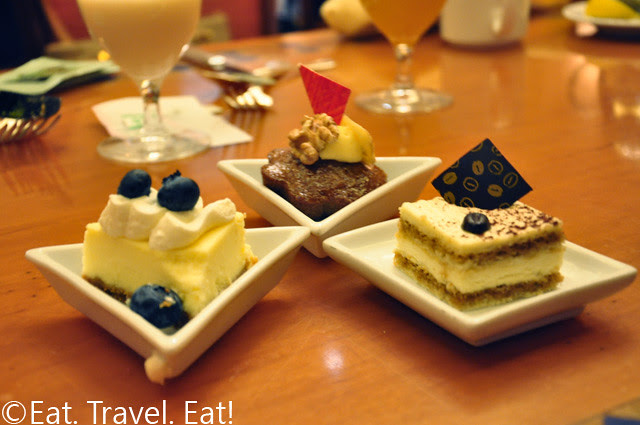 The other two items I got were the cheesecake and the tiramisu (the walnut banana I put in for fun, I didn't eat it). The cheesecake was very creamy and flavorful but not as dense as what Cheesecake factory would serve (thus I didn't feel too bad even eating most of it). And the Tiramisu had thin cake layers which were soaked in coffee and in between were creamy layers of a sweet marscapone cheese cream. On top were a chocolate espresso bean and a slice of chocolate. 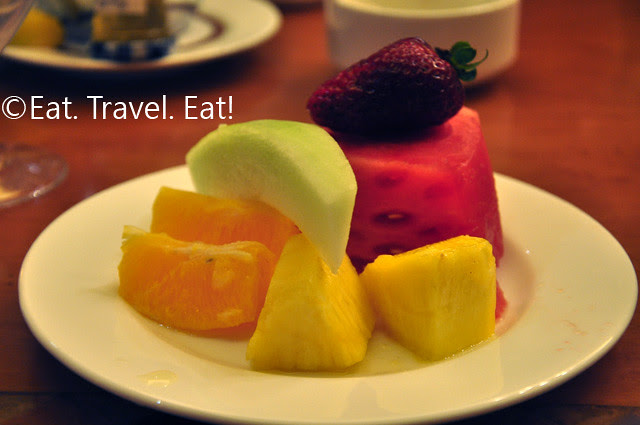 To not just be indulging on sweets for dessert, I also went to pick some fruit, some of which were from various breakfast sections that were not for fruit. As you can see, no more yellow watermelon- it's red now. The oranges came from a section where there were also smoothies and juices- however that section had closed down and they were switching to lunch mode. All the fruits were very good- fresh and sweet. The strawberry didn't compare to the chocolate covered strawberries in terms of juiciness and sweetness but it was still quite nice. 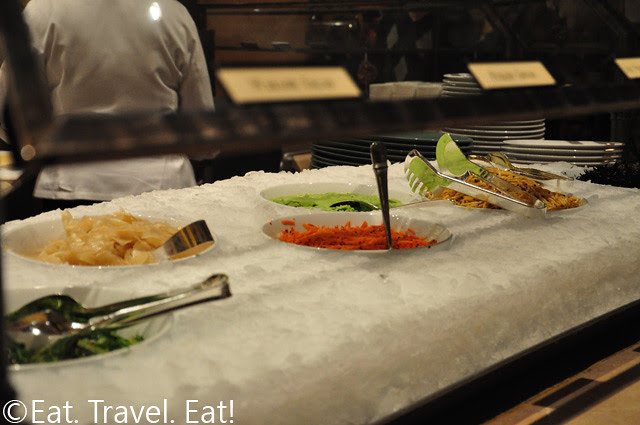 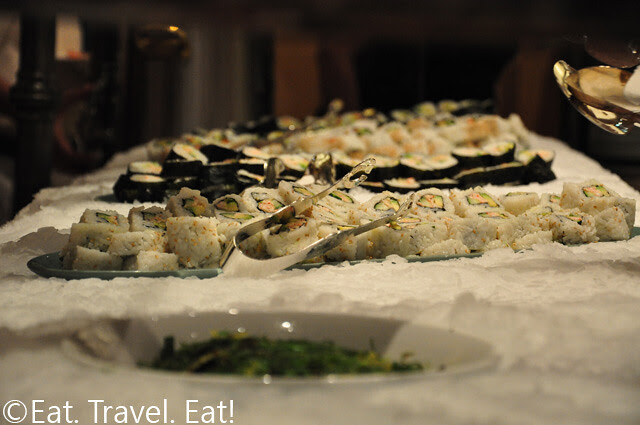 After finishing the fruit I walked around yet again and got a glimpse at the sushi section for lunch which was quite extravagent with multiple salads and sushis. One of my dining companions meanwhile had a very nice salad from one of the lunch sections. The special thing is that you don't get the salad yourself, you get it from an employee (maybe also because it was early lunch).

Overall? I'd say a fantastic deal and meal. High quality food at a good price for those who like to try a bit of everything. If you were thinking of going to a casual restaurant at the Bellagio, you might as well come here. You are probably going to spend the same amount but yet the Buffet offers similar quality and a much wider range of options, especially during lunch. Want the best of both? Come like we did, right before lunch started- and you'll have a nice brunch. However, be smart and request a line pass if possible. That will save you at least 30 minutes of waiting during peak hours, if not more!

With prices being less than Wynn's by quite a bit I'd take Bellagio as a great option for a buffet in the high mid-range. Spend the extra money if you wanted to eat at Mirage or somewhere similar- it's definitely worth it! Wynn is basically off by itself for the expensive buffet, and the main difference is a nicer presentation. :)

Next post in this series? Going home and a few pictures of Caesars Palace. See the entire series through this index (HERE).

kirbie said…
Wow, I can't believe the price compared to Wynn's. I want to got to Vegas now just so I can visit the Bellagio buffet.
July 20, 2010

Unknown said…
OMGGGG I am a sucker for buffet and look at thatttt I am super duper duper jealoussss!!! What a scrumptious spread!!! Arrrghhh *pingsan*
July 20, 2010

Anonymous said…
FAAAAAARK! Why didn't I know about this last month! Ended up spending MAD $$$ @ Bouchon. Dude, that is a killer, killer brekkie bargain. Except in the morning, no one wants to get up for breakfast, no?

gourmetpigs said…
wow only $16? Really?? I had brunch buffet at Bellagio before and it was more like .. $37? Maybe bcs it was a champagne/mimosa brunch tho. But this $16 buffet w crepes and omelette station I am totally down for. Noted and thanks!
July 21, 2010

Wandering Chopsticks said…
I like to go at the tail end of lunch and stay through dinner to get crab legs. Lunch is only a few bucks more.
July 21, 2010

EatTravelEat said…
Greece Traveller,
Thanks! You know you don't also need to put your website on, your username has a link to your website.

kirbie,
I know. I was amazed myself. I used to think Wynn and Bellagio had the same price. But Wynn is slightly nicer. Feels just a bit more high end. :)

Mochachocolata Rita,
But Shangri-La's Cafe Too or Cafe Kool have great buffets all day long! Freshly cooked porridge and tons of dim sum. I want. Again.

Sinosoul,
Bouchon's probably better in terms of quality. I didn't try any conventional breakfast items like waffles since they didn't look as appetizing or special as the other stuff. :)

Burumun,
Yeah, quite nice. Brunch buffet and weekend dinners cost a lot more though. :) Regular breakfast and lunch are cheap though.

Oh, no crepe station. There's just a tray of the apple crepes and cheese blintzes.

Wandering Chopsticks,
If I had visited for one more day I would have done exactly that! And if went slightly later I would have had more lunch items. :)
July 21, 2010

Protocol Snow said…
Bellagio buffet was my favorite before Wynn opened, but now I like Wynn buffet best for its quality, presentation, and atmosphere. I've also noted the yellow lighting at the Bellagio buffet. When I went back to Bellagio's last year, it felt quite dark and dreary in comparison to Wynn's. Still an elite-class buffet though and that price is hard to turn down. Unfortunately, I limit myself to 1 buffet per Vegas trip (otherwise I get satiated). Until a challenger emerges, Wynn it'll be :D
July 21, 2010

EatTravelEat said…
Protocol Snow,
Yeah, Wynn definitely feels more high end and luxurious compared to Bellagio. Bellagio is nice though for the price! It's just that every time I visit Wynn for their buffet their buffet line is enormous. :( Line pass please!
July 22, 2010

Anonymous said…
Hello,
I like the what you write. It gives me very good idea on what to expect. Can you tell me how to get a "line pass"? I am heading that way at the end of March and I can't wait!!!!! Thanks.
March 03, 2012

EatTravelEat said…
Anonymous,
You can ask nicely at the front desk for one. In my case, when my companion was checking in, the employee gave him a line pass.
March 04, 2012