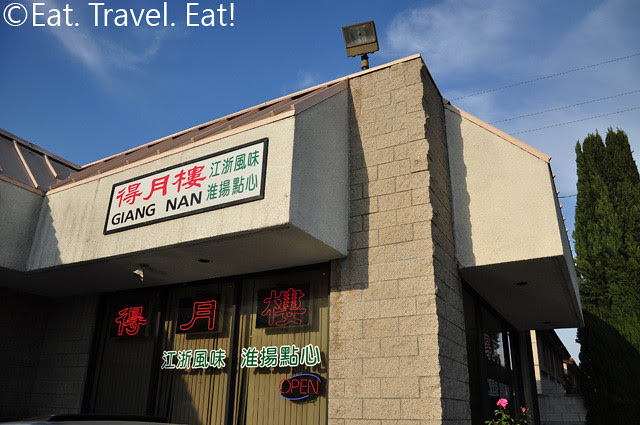 We drove by and arrived at the place: Giang Nan. Oh! This place! How familiar sounding. That's because Kevin of KevinEats wrote a post on this place. Yes, it is in a strip mall that has plenty of clothing stores and a few restaurants like Dean Sin World. I wanted to stop by Dean Sin World after the meal thanks to so many mentions by food bloggers, but by then there were no customers there and they seemed to be closing for the day.

Next time I am going to visit Dean Sin World however. Thanks to Tony of SinoSoul's post on Dean Sin World, I found out Sinbala has been lying that they make their xiao long bao themselves (that's what I got when I asked them who makes their XLB). They were quite tasty! And when I found out Shanghai Bamboo House has a supplier who makes XLB for them that apparently doesn't sell them to the public, all this came back to life. Wasn't planning on visiting DSW after seeing them without customers last time but I am going to next time! 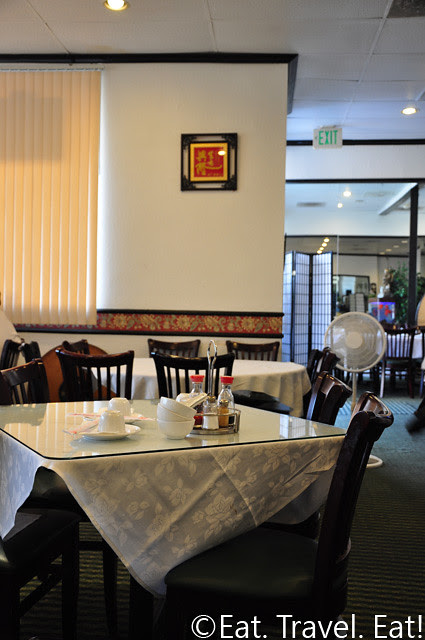 (going back on topic) As kind of expected by Kevin's photo of the interior, it was not anything special. Very old style, glass over tablecloth setting. Although some of the lights were on, the sunlight was also being used as a light source since it was not evening yet.

I didn't order anything at all this time- I just played along while looking yet again at Kevin's post to get some spoilers on the food (ok, not really for that purpose but for what to order). My dining companion ordered his House Special Pork Knuckle of course, and then he chose two vegetable dishes from the papers posted on the mirror (written in Chinese only) as well as a soup. Not much, you may think, but it was enough, as you'll see later in the post! 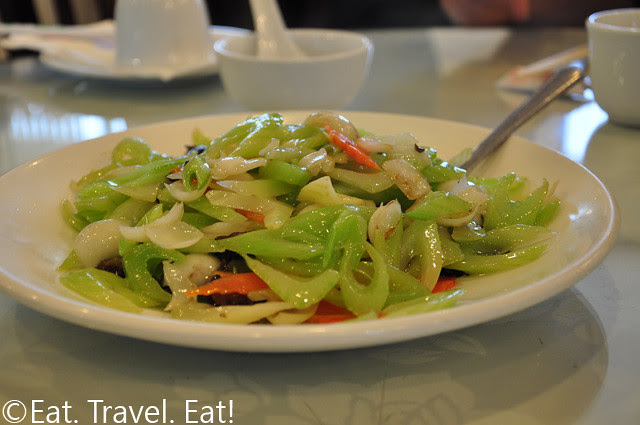 Arriving first were the two vegetable dishes. One was the celery with lily bulbs. And although I do not know the prices, the prices here at Giang Nan are very reasonably priced, just like at Shanghai Bamboo House. The celery were crisp and never stringy, while having a strong flavor. In fact, everything tasted just like it self and was just put together with everything else. The lily bulbs were fresh too, with a light crisp and smooth interior. Nice simple stir fry, if not tad bit on the oily side as you can see in the photo. 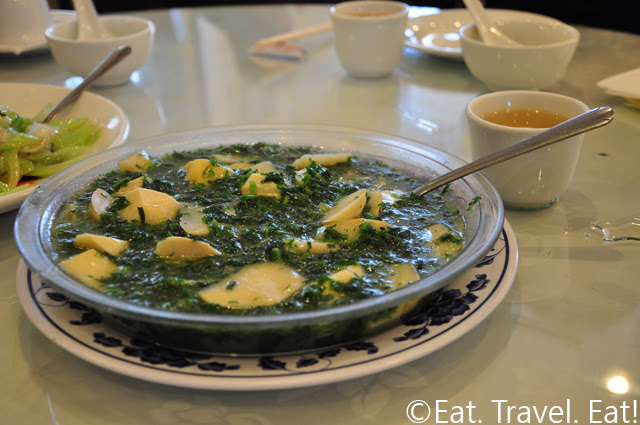 The other vegetable dish found on the paper on the mirror was bamboo with "qi cai" (guessing). The Qi cai was very tiny and tender, while the bamboo was crisp and definitely fresh. There was a nice texture difference and the sauce which was probably just stock and possibly MSG/ chicken powder melded the dish together with flavor. 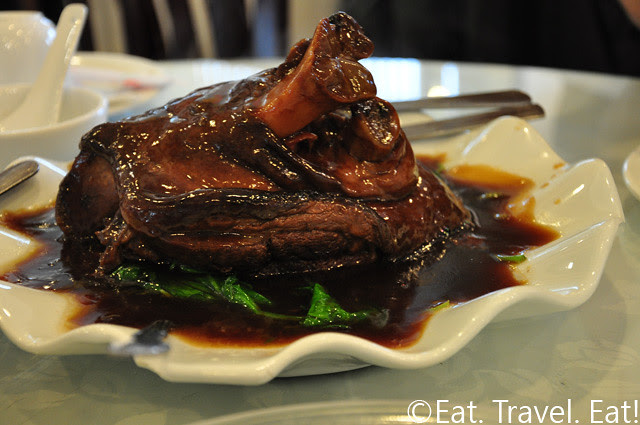 Our so called main course arrived next, the House Special De-Greased and Braised Pork Knuckle (15.95 USD). It was served with the same braising sauce as you would find in other Shanghainese pork braised dishes- slightly sweet, nice hint of soy sauce, and a nice mix of spices like cloves and star anise. Served on a bed of tender and crisp spinach, this pork knuckle was gigantic. Probably even larger than what Kevin got. :)

You just had to dig in to the meat, as there was no defined way to cutting this, nor was this the same cut of pork as dong po pork. We separated the bone first, and then enjoyed the meat, which was definitely greasy at the outer portions near the skin. The inside was very tender and porky, but the sauce made it all the better. As for the outside part and the skin, it was so fatty, but also good in certain parts- some parts were a bit dry, others tender. Of course, eat in moderation. I haven't had a dish similar to this in years.

And of course, have plenty of rice handy. The sauce is really tasty, but near the end of the meal it will look oily. I told you so. :) 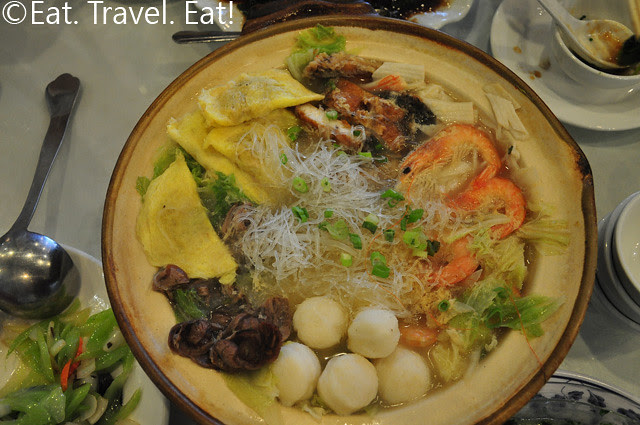 Last came the soup. Aha, yet another meal done out of order. :)

This was called the Stewed Assorted Meat Casserole (13.95 USD), but the chinese name has more to do with a whole family portrait. As saying, tons of different meats and vegetables! As you see clockwise: fried fish, imitation crab, shrimp, lettuce, fishballs, beef, egg dumplings, and rice noodles to the center. We had a similar version at Shanghai Bamboo House later on, but that review was posted before this one. :)

Yes, the Stewed Assorted Meat Casserole was quite similar to Shanghai Bamboo House's rendition. There were just more ingredients in this one though, hence why we ordered only one meat specific course (which was already enough). There was especially lots of glass noodles. Otherwise the soup was good, with a normal soup base as you would find at other Shanghai restaurants where the ingredients put in for looks take a part in providing additional flavor to the meaty but light soup base.

Overall, a good meal at Giang Nan. People who live nearby definitely will like this place for Shanghainese food. For us, this is nice, but a bit far for just a meal. With an excuse for something else, I'll possibly go here again, but next time is Dean Sin World, I told you that already. :)

Ben and Suanne said…
The Braised Pork Knuckle is something I want to order if they have it on the menu. I know it's unhealthy but the best part is the fatty skin. LOL!

BTW, how did you put up so many Urbanspoon badges, one for each city anyway?

EatTravelEat said…
Hi Ben,
Yeah, fatty skin is good! I like it more on Dongpo pork though compared to this one, although this one is quite good. I'm sure one of restaurants in your area does something similar- usually dongpo pork is what is more common.

The Urbanspoon badges come from different cities/counties. There's a Las Vegas (Nevada) Blog leaderboard, Orange County one (California) and Los Angeles one (California). You're on the Las Vegas one for sure, that I know. :) I just got the HTML code for each badge from each blog leaderboard, that's how I have 3. Just click on the different sections of Urbanspoon (it gets into a different city mode) and find the leaderboard to get the badge. I possibly might get more if I ever visit Vancouver and Richmond! ;)
August 10, 2010

Kirbie said…
I love the braised pork knuckle dish. And yes, you should definitely visit DSW! I go there often just to pick up some frozen dumplings.
August 11, 2010

Kirbie,
Haha, you're from San Diego yet even I haven't been to it. Definitely need to visit sometime!

Wandering Chopsticks,
If Tony is right still after almost a year since his post then it's Dean Sin World. :P
August 13, 2010

imjustatree said…
heyy! i went to dean sin world a few days ago and saw this giang nan place that i read about here and was thinkin about goin to next time lol. do you need to speak chinese here? when we went to dsw, none of spoke chinese, and the english descriptions didn't help too much...still was good though and cheapp!
August 17, 2010

EatTravelEat said…
Sawyer,
I'd say you should know some Chinese for Giang Nan, although if nothing works out you could point as their wording is OK. Ask Kevin maybe?