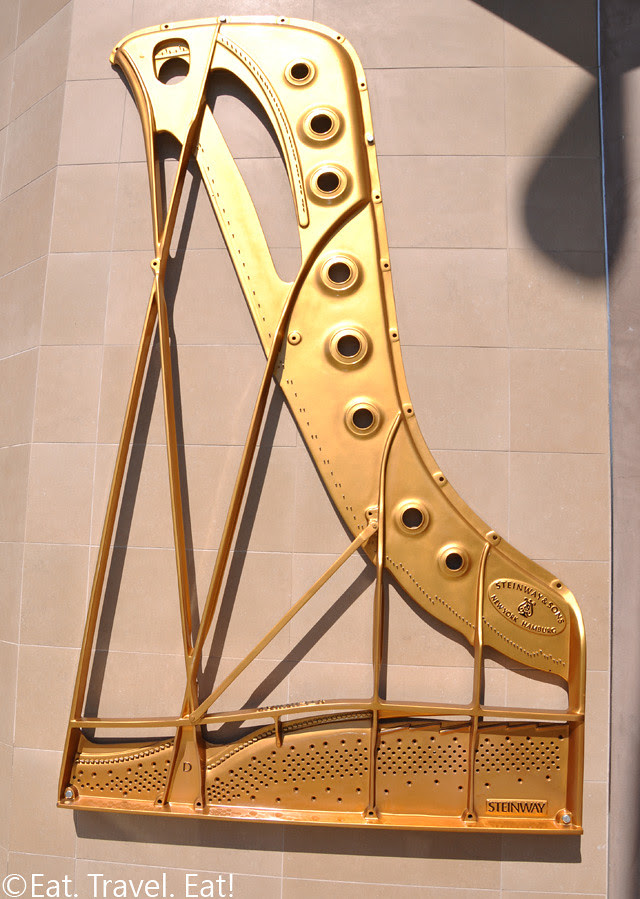 Recently, I got an invitation to visit Steinway Piano Gallery in West Hollywood for a seminar on "the secrets of Steinway", basically a seminar teaching about a piano is made- specifically a Steinway. Not only would it be exceedingly interesting on how a piano is made in the New York Steinway Factory, I would be able to also try another interesting restaurant in the LA area if I went. A win win situation! I accepted the invitation, of course. Besides, it was a perfect way to round out this summer...since school starts very soon.

We arrived at Steinway at 11 for the seminar, which lasted for two hours. It was really exceedingly informative, but I'm not going to talk about the "special parts", as other piano manufacturers are interested in knowing "the secrets of Steinway." Our knowledgeable presenter, which was also the general manager, went through the parts that made a Steinway special, and then we got to touch small displays of parts for a hands-on experience. Questions were asked on piano maintenance and piano restoration, as well as some comparisons on piano manufacturers and Steinway's own lines of products. The other plus was listening to the concert grand on their stage which was placed on top of two Steinway B flattened sections. How creative! And the Steinway D sounded fabulous. All in all, a very informative seminar for any piano lover. I learned a lot. And so did the 30 or so people in attendance. :)

And the top photo? That is a sand cast grey cast iron plate for a Steinway D, their concert grand like I mentioned before. With some waterproofing of course for longevity. Take a look if you are in the area- it is a sight to see. And play their full line of pianos- used and new Steinways as well as their Bostons and Essex series...which are designed by Steinway, not made by Steinway. Of course, the showroom is mostly dedicated to Steinway & Sons with almost the complete lineup in the showroom. Not Boston (I counted 3), or Essex (about 4) however. 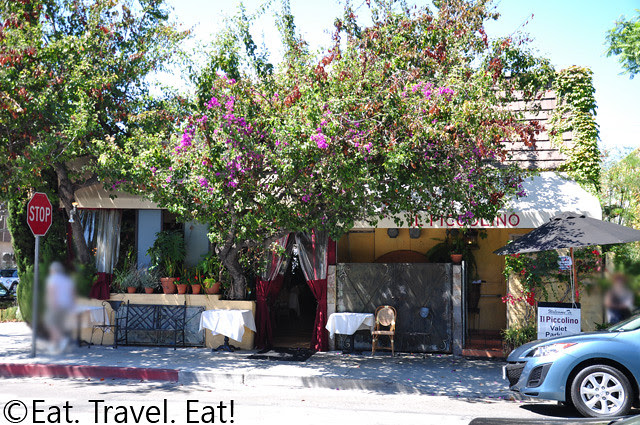 Anyway, after the presentation we were exceedingly hungry. It was already almost 2 o' clock, which was late for lunch at any restaurant. I had planned on visiting Spago, but my dining companions wanted to eat immediately. And choosing a restaurant in walkable distance would mean we wouldn't have problems on parking. Now, what to choose from? Petrossian was right across the street, which Kevin of KevinEats had written about before. And then there was Il Piccolino, an Italian restaurant which was busy with customers, but had almost no signage at all- kind of hidden, just like Shaab in Pasadena. With so many customers and a hidden look, Il Piccolino made one of my dining companions want to visit. None of my other dining companions cared for Petrossian or any restaurant in particular, so off we went into Il Piccolino. 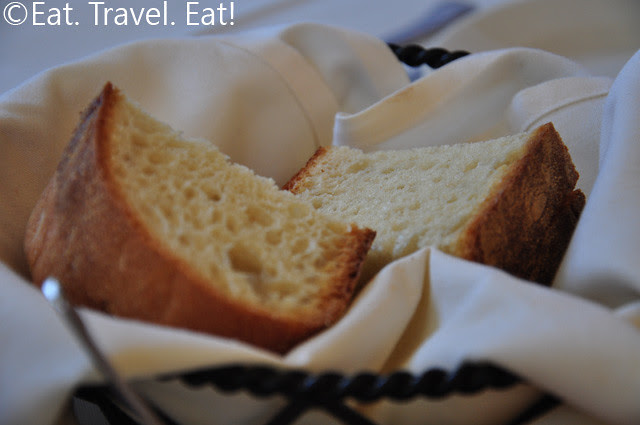 Inside, we were handed some turquoise lined lunch menus and then some bread. But where was the butter that you would commonly expect with bread? 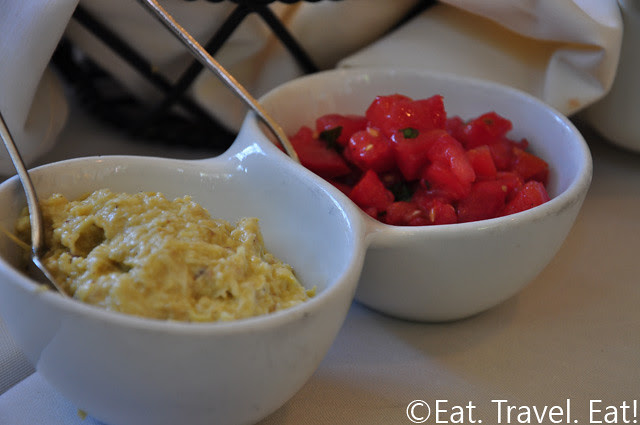 There was no butter! Instead, a dish with two rounded sections held a slightly acidic artichoke and parmesan spread as well as a tomato bruschetta topping. Both were fabulous toppings, especially the tomato bruschetta topping. Those tomatoes were so sweet and flavorful! What Il Piccolino says on their website is definitely true: their ingredients are very fresh and organic. I haven't had such a flavorful tomato in a while! 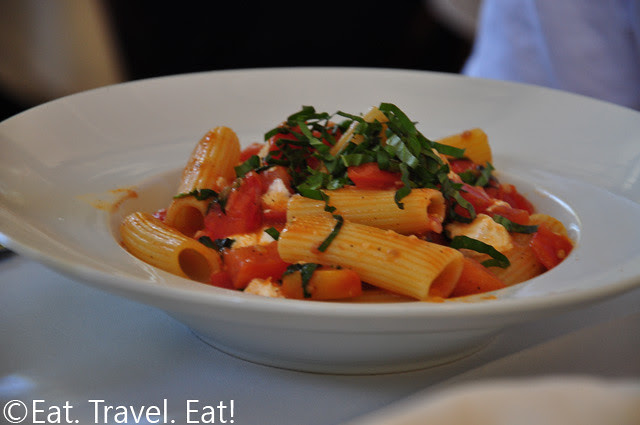 After quite a while (like most high end restaurants make you do), our dishes arrived. One of my dining companions ordered the Rigatoni Caprese, basically al dente rigatoni pasta mixed with fresh tomato, mozzarella, and basil for a caprese like feel. The tomatoes were sweet and flavorful like in the bruschetta mixture, providing a nice flavor and sauce to the pasta. Overall, the dish was quite light. The flavors were simple, with the basil, herbs, mozzarella, and tomato, and the slight addition of parmesan just made it even better with the salty flavors of parmesan. 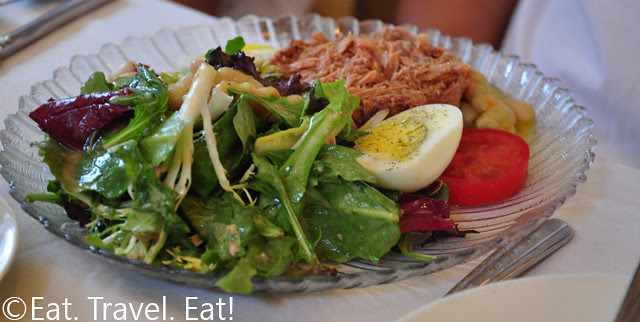 Another dining companion ordered a tuna salad, probably a tuna nicoise? I didn't look at the menu closely or hear what my dining companion orders since I was busy finding an item to order. Anyway, this salad had a wide variety of vegetables. The veggie mix was tossed in a light vinaigrette, and there was also also egg, tuna, tomato, and beans. The tuna was very concentrated in flavor which made us feel like it was canned, but apparently it was fresh! Otherwise it was a nice salad. 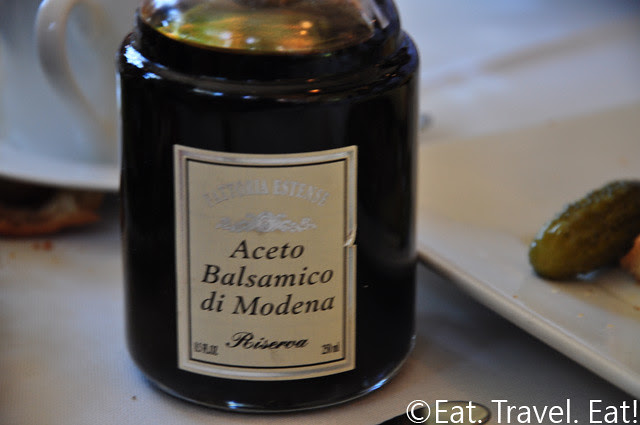 We also added some balsamic vinegar to the salads. Now this vinegar was fabulous, probably one of the best balsamic vinegars we have had. It was thick and sweet, apparently aged for at least 10 years according to their website. 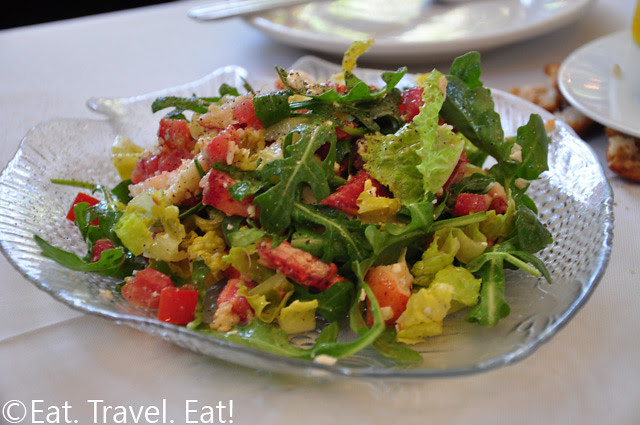 My other dining companion ordered a Lobster Salad which had tons of chunks of fresh lobster with tomatoes and a mix of greens (I tasted romaine and arugula) tossed in a very light vinaigrette. This was tasty and very light, and a light touch of the balsamic didn't hurt at all. :) 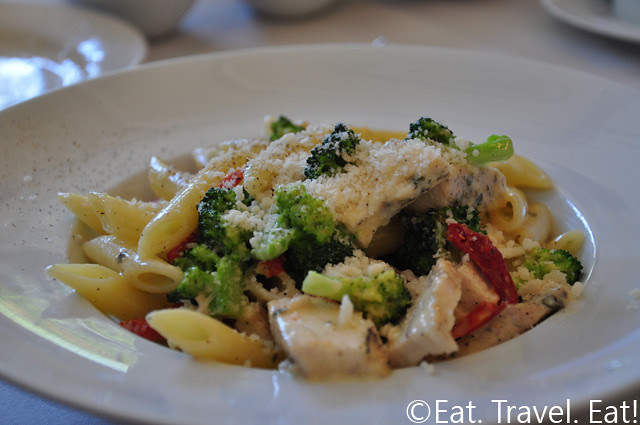 I ordered the Penne Pollo, which had chicken breast from Rosie's Farm which produces organic chickens, broccoli, and sun dried tomato in a light cream sauce. The penne was cooked al dente and the cream sauce was not heavy at all, lightly coating everything and binding the flavors together. Rosie's Farm chicken breast was cooked to tender and went well with the bright sun dried tomato and green broccoli. Easy and tasty. No wonder why some say Italian cuisine is easy. :) 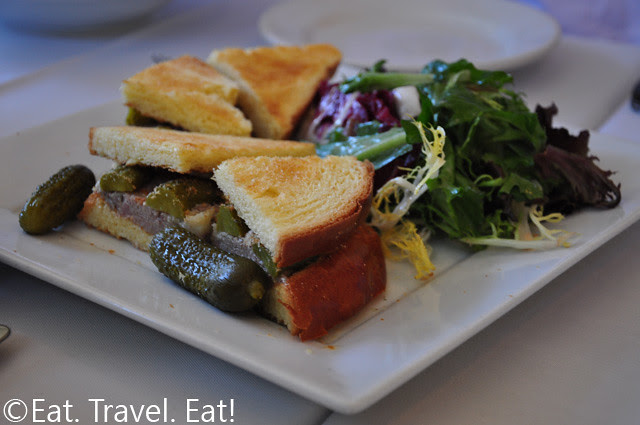 We also ordered a Duck Panini to share, which also had cornichon pickles, or pickles made from gherkin cucumbers. Surprisingly, the panini wasn't pressed very down far, with the bread still retaining its fluffiness inside but with a new crisp exterior. Inside, the duck meat was pureed into a paste, which was quite interesting, and the pickles provided a nice textural and flavor contrast being crispy and slightly sour. To the side was a mound of mixed greens, which we flavored up with you guessed it, the balsamic vinegar. We probably finished 1/3 of the vinegar bottle. But in this case, it was because the vinegar was tasty, not that it was needed to improve the dish drastically.

We didn't order dessert since we were full, but other tables seemed to have DELICIOUS looking desserts. There was a large bowl of something chocolate (chocolate mousse perhaps?) as well as pastries. Some of the customers as we found out came from traveling. It seemed as if everyone knew each other at the restaurant, and the owner was very friendly and courteous. So was one male server who seemed very happy working there.

Overall, a very nice lunch at Il Piccolino, just like what my dining companion was expecting! It's really a hidden gem. But if you've been there, you'll know why there's a nice customer base. Tasty authentic Italian food, and a nice interior (plenty of greenery and interesting items...no photo) to boot. Great for those in the area! 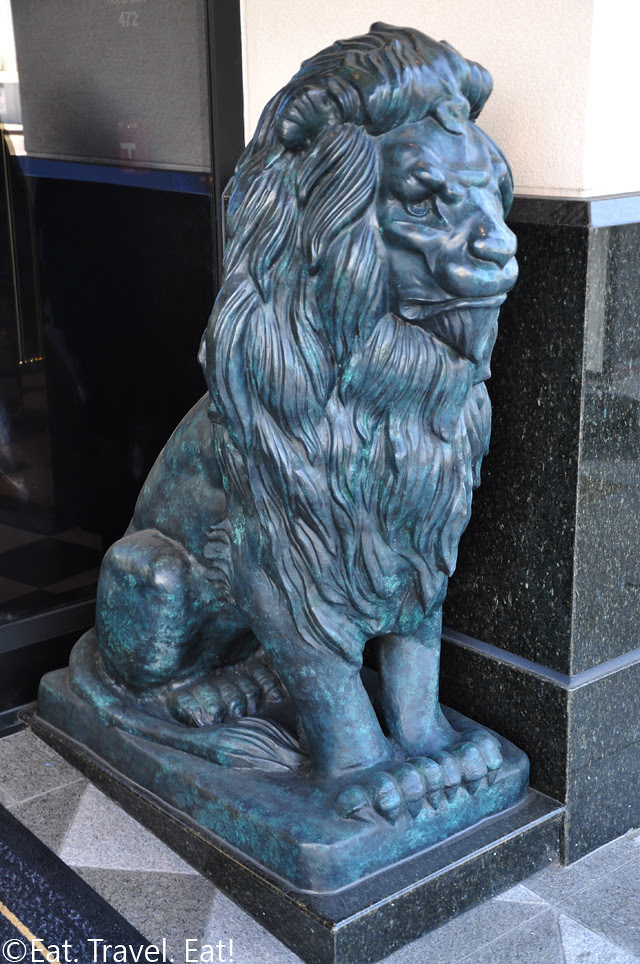 Later, we returned to Steinway Piano Gallery to test out some pianos. What's the difference? The answer wasn't very clear cut, but what the general manager said about their pianos in terms of sound was really true. Not that it should have been surprising, but it was for me, having not heard so many pianos at one sitting! Bell like treble, mid end with plenty of tonal color, growling bass that could be subdued. I found that in every Steinway and Sons, although each one varied slightly, some more than others.

After a nice chat at Steinway Piano Gallery (and finding out Il Piccolino actually has a celebrity customer base too!), we walked to Beverly Center, where a group of girls who were visiting LA asked me to take their photo. And at Beverly Center, I took a picture of a lion at Capital Grille. Don't see lion sculptures often these days, especially at restaurants!

Dinner? Not in Beverly Hills or West Hollywood. We actually went to Face Cafe, where we found out it had gotten a C on its last health check (gasp!)! However the food was just as tasty as before. Hope their sanitation rating gets back up to what it used to be. It also seemed like the owner had changed, but the chef did not. Still a nice daytrip in West Hollywood and Beverly Hills anyway! Plenty of architecture, a nice lunch, and some great piano information learned.

And on a sidenote: How do you like the new header? And did you notice the Facebook button?

EatTravelEat said…
Kevin,
Will do! Although I'm probably not going to have much caviar, but more on the other items on their menu. :)
August 28, 2010

kitchen table said…
It is my first time to view your blog and this post surprised me. The first photo is just so unbelievable. Is it gold plated? The articles are really fun to read and the pictures of the foods looks so good.
August 30, 2010

EatTravelEat said…
Kitchen table,
Well, hope you visit again! The piano cast iron plate has been sprayed with gold paint. Not gold plated, or else it would be very costly if someone stole it! Most pianos have a plate in a similar color.
August 30, 2010

Anonymous said…
DUUUDe. Just say no to Face cafe. The Steinway seminar seems cool as heck! Petrossian, not as much...
September 01, 2010

EatTravelEat said…
Tony,
LOL on Face Cafe. But I know you don't like it! "Worse restaurant" you called it. If so then don't even think about going to China Bistro, which is the originator of Face Cafe. I didn't care for China Bistro, but Face Cafe for some time was very popular AFTER you wrote your review. :P Maybe not so much now.

Steinway seminar was definitely cool, especially if you like piano related topics! Petrossian, I know there's other stuff to eat there, but if I don't eat caviar...going there doesn't make much sense.
September 01, 2010

Sue said…
Il Piccolino looks wonderful! I want to try that place just for the bread spread, the artichoke & parmesan and tomato bruschetta toppings look so good! And then I think I'll want a lobster salad. Haha thanks to your pics, I know what I'll be ordering before I even visit! :)
September 10, 2010

Thanks for visiting the blog! Hopefully your experience there turns out as good as mine!
September 11, 2010