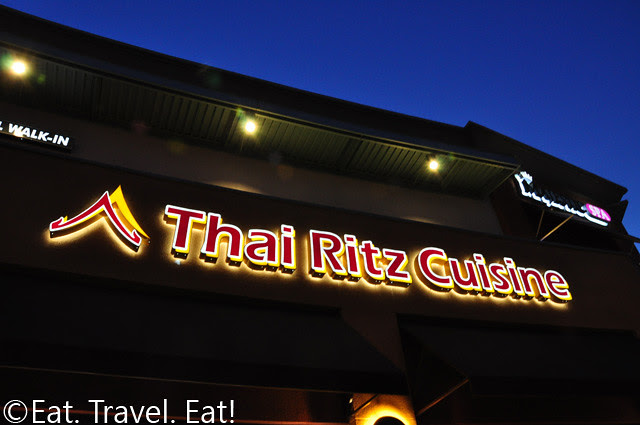 Searching for a restaurant to eat at sometimes can be difficult. As always, I have a list of places to try out in Orange County, but the problem is that almost none of them are close by to UC Irvine, our main point in going to Irvine in the first place. So, without any choices to choose from we just headed off to Diamond Jamboree in the possible search in finding a restaurant. 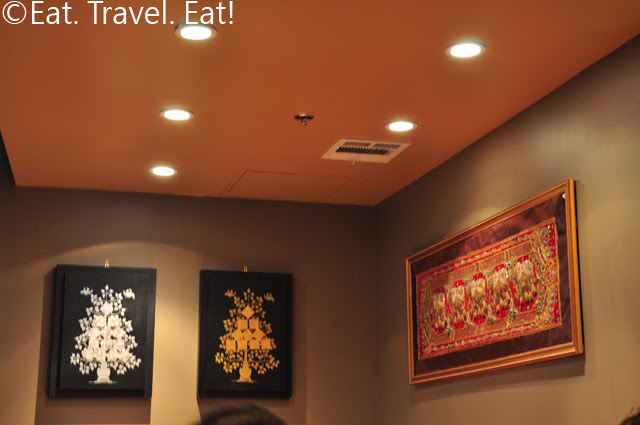 When we arrived we were in a bit of a dilemma. BCD Tofu House was full, Kula was full, and both Capital and Tokyo Table were available in Arcadia. So what other place to go? My dining companions decided on Thai Ritz Cuisine, which I had read about in Eileen's blog, Eileen Likes to Eat. The post wasn't completely positive on Thai Ritz, so I wasn't very convinced on trying it out, but what other place to go? Plus, it was late, so we just went in. 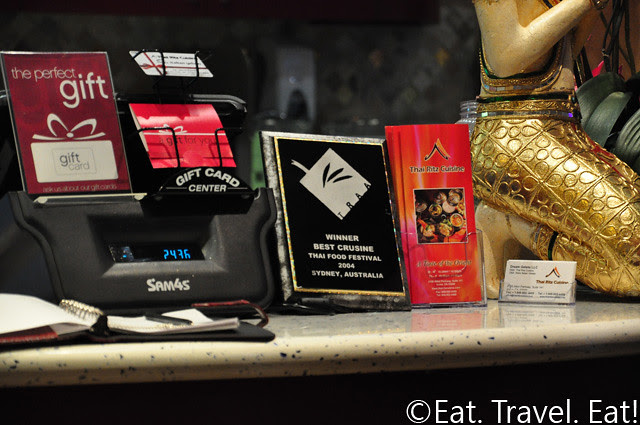 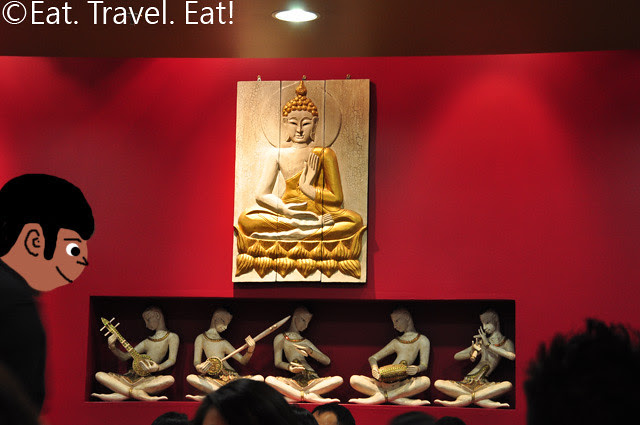 Inside, it was styled quite lightly, with not too many Thai decorations all over the place. Apparently, they also won an award for their food, but that was in Australia in 2004. Who knows if the food changed or not? And yes, I drew over the person's face since he was an employee which I think even if I blurred him out, you would be able to tell it was him. 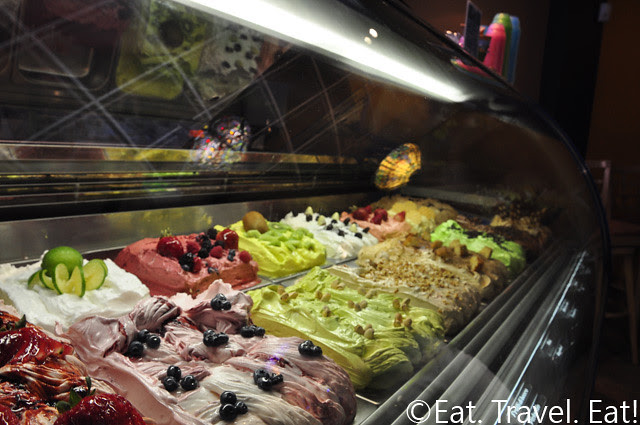 Thai Ritz also had a gelato bar named Stars Italian Gelato. While we were waiting for our table, we glanced at this for fun, but didn't order anything since it was a tad cold in terms of weather. 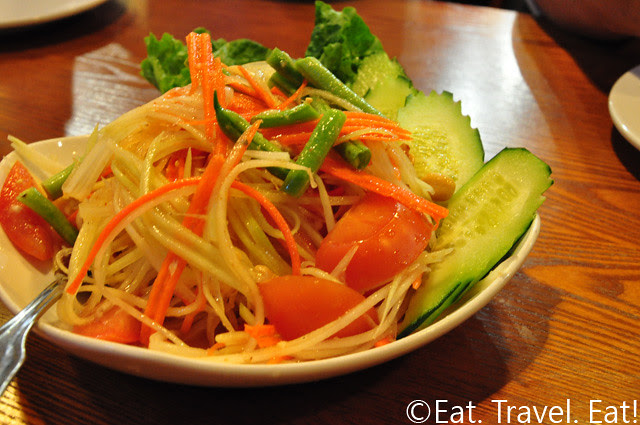 For an appetizer we ordered the Papaya Salad (7.95 USD). I haven't had papaya salad before so this was something new. The papaya was quite crisp, and so were the carrots. There were also cucumbers, green beans, roasted peanuts, and tomatoes. Why peanuts? I don't know. Anyway, everything was doused in a sweetened fish sauce mixture and lime for an additional punch. 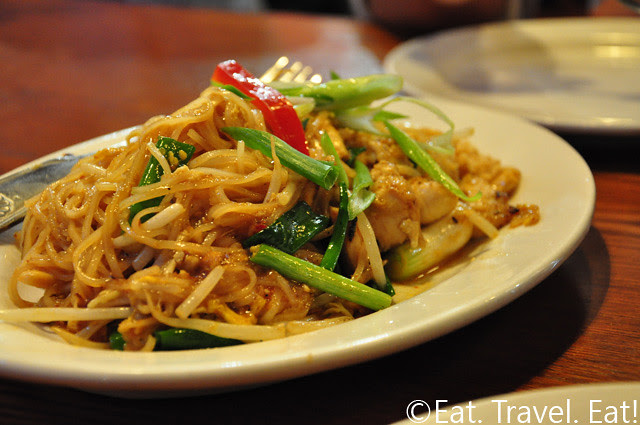 We also ordered two noodle dishes; one was the Pad Thai (10.95 USD). In terms of flavor, this was a bit lighter. There wasn't that much tamarind and the pad thai looked like a light orange in contrast to places like Lotus of Siam where they are of a darker orange/brown. Less tang and sweetness. Otherwise, the noodles had a nice chew, but overall the dish was quite oily for Pad Thai. 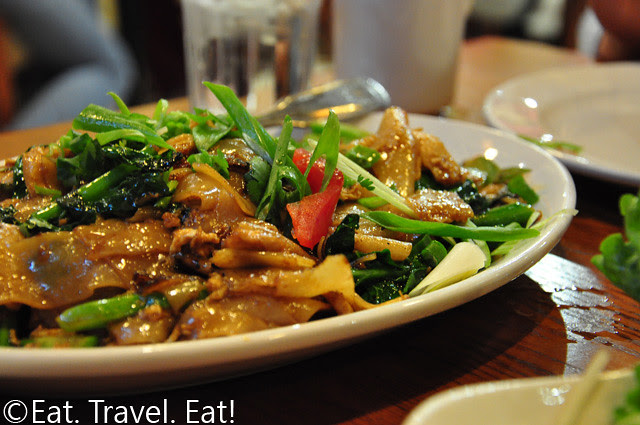 We enjoyed the Pad See Eaw Noodles (8. 95 USD) more (but I think I had Pad Kee Mao). There was more flavor, but it was still oily. Plus there were more vegetables, and the large rice noodle sheets were not charred nor too oily in taste. 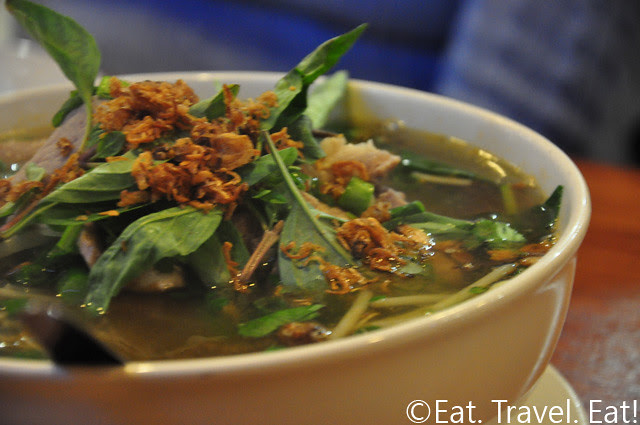 As for the Pork Noodle Soup (Thai Boat Noodles) (9.95 USD), it was interesting. It tasted like pho to me with nothing on the side, silly enough. Probably the spices were just very similar! The chewy noodles were nice. Otherwise, a nice bowl of noodle soup if a bit on the expensive side.

Anyway, Thai Ritz Cuisine is an OK option for those who want Thai food in the nearby area, but probably some other restaurants would be better if you want a more authentic place to eat! And I still have my list which hasn't been shortened yet. When will the next trip to the OC be? :)

kirbie said…
Good call on not getting the gelato. It's overpriced and very artificial tasting. And they charge you for the cups they put the gelato in! it's the only place I've been to that does that.
August 13, 2010

EatTravelEat said…
kirbie,
Glad I didn't spend the money! One of my dining companions asked if I should buy one, I said no. :)
August 13, 2010

Marilyn said…
I wouldn't go here again.. I had a friend who worked here for a few weeks and said that it's really dirty in the back and they put msg in everything even though they say they don't. Thai Kitchen on Barranca in Irvine is a much better choice for Thai food in the area :)
August 13, 2010

EatTravelEat said…
The nomster,
I agree! Other places are better, but I knew that already when I visited here. Like Thai Nakorn, which Edwin Goei says is very good and authentic.
August 13, 2010

Lea @ Healthy Coconut said…
I'm work near the area and I agree about the food, it was ok. If you want authentic Thai, strong flavors and not too pricey, check out Jumpa Thai on your next visit in OC. It's in Garden Grove.

joanh said…
so random to have gelato at a thai place! and the pad thai almost looks like stir fried noodles in the pic
August 22, 2010

Sue said…
Wish I saw this sooner! I would've loved to gone to a better Thai restaurant though my experience at Thai Ritz wasn't bad, but just OK, too.
September 10, 2010

EatTravelEat said…
Lea,
Thanks for visiting and thanks for the recommendation! I usually go to Irvine first though, so Garden Grove is kind of making a U-Turn after going to Irvine. But I need to visit someday...

joanh,
I know! How random!

Sue,
Thanks for visiting! It seems like the main consensus is that Thai Ritz is just OK. :)
September 12, 2010