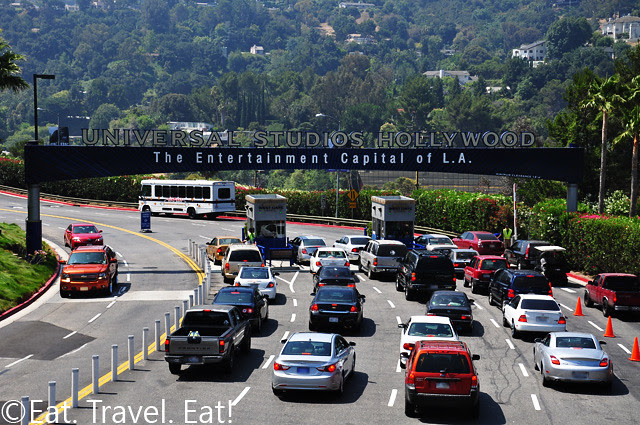 Remember more than a year ago how I wrote about amusement parks like Knotts and California Adventure? Well, here's a third installment, which came by not due to school but for just a day of fun with friends. It was one of my friend's last full day of staying in LA before he went back to China, so we had to make it memorable for him. :)
Personally, I haven't been to Universal Studios Hollywood in almost ten years, so this was another eyeopener into the LA area. As I've told you before, some people don't believe I even live in the LA area since I never talk about LA. Well...that's changed from this summer! I've written more than 5 posts on places in Los Angeles and the nearby area. 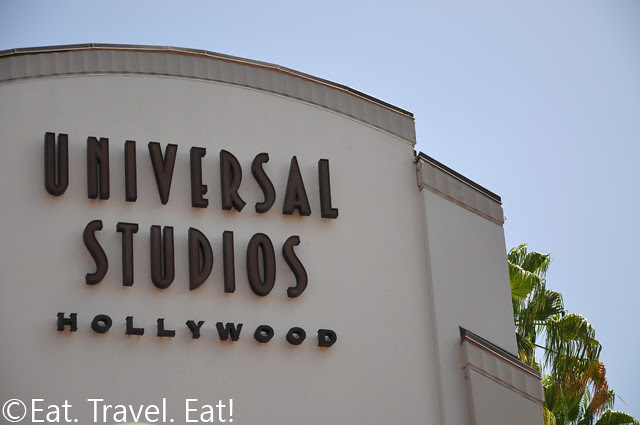 Lots of people were at Universal Studios- after all it was the first weekend of August. While waiting in line, there wasn't much to do other than take pictures and talk! However, routinely employees came by to make a show and dance to make the wait not as boring. There was plenty of tourists- I saw some with a Cathay Pacific tag saying their plane came from India, and some came from giant tour buses. Lots of people were also posing at the Universal Studios Hollywood sign, trying to get a picture. And with that said, it was amazing how much variety there was in terms of cameras. Throughout the day, I probably counted more than 3 people with the same Nikon D90 with 18-105mm I brought, 3 people with a Canon 5D Mark II, two Canon G11's, lots of Canon Rebels, and plenty of Nikon D40's and D60's as well as one time use film cameras. Amazing! 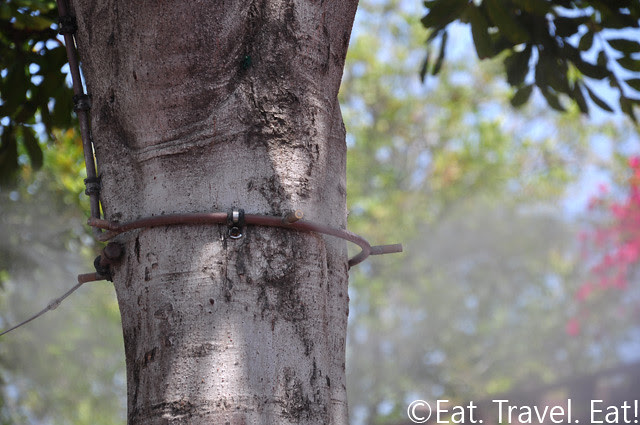 As we got closer to the ticket area, there was also more shade brought by trees. Installed on each tree trunk was a ingenious water mister which helped people keep cool in the sunny California weather. And after 20 to 30 minutes of waiting, we were at the ticket purchasing zone.

---------(Buying ticket fiasco)---------
You'd kind of expect a So Cal resident to easily get through with the discount on general admission, no? Well, each employee had their own twist.

In the case of my friends, they were taken care of by an employee which just asked, "How much would you get in a discount if you are a So Cal resident?" If you got that answer correct, (15 dollars), you got through without even needing to show your ID! :)

The employee who serviced me? I showed her several ID's of mine after telling her about the SoCal Discount for residents and she just said, "I don't accept this. There's no such thing."

Really? As if trying to be like the lawyer on Off Pedder (a Hong Kong TVB show) who tried not to admit he crashed an employee's car by acting like he knew nothing would let her get away with it and make me pay full price for admission? Nope, that was not going to happen. Or was she just joking? Who knows.

After a pause, I just said to her all the parts of the So Cal discount which I had read about on the So Cal Resident's page. Then she understood. It wasn't easy, but after she took one of the ID's for checking then and going to speak with someone else I went through.

Moral of the story? Stand up for yourself when you know what you are doing is correct. Or else, you might as well be cheated 15 dollars at Universal Studios. Or in a bigger denomination in other parts.
---------(End buying ticket fiasco)--------- 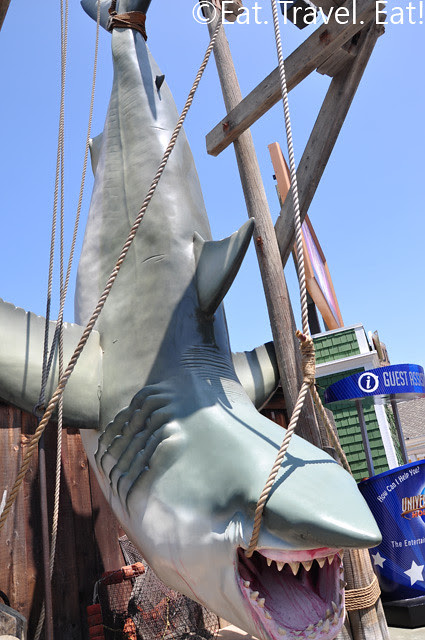 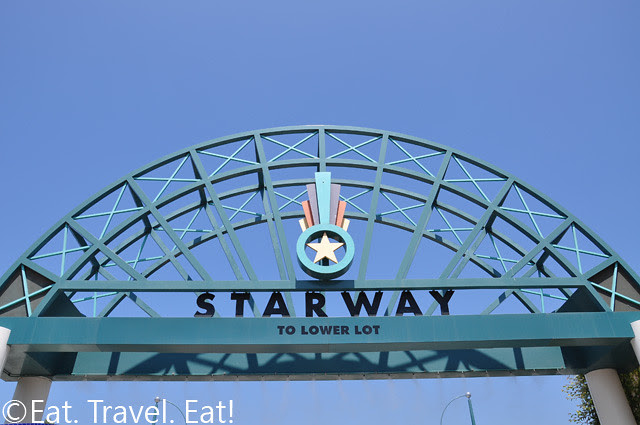 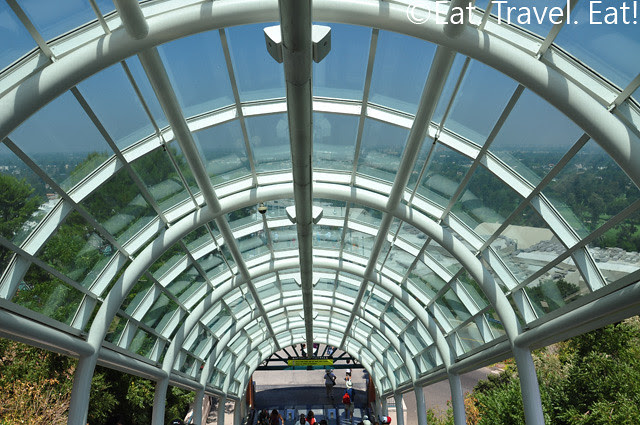 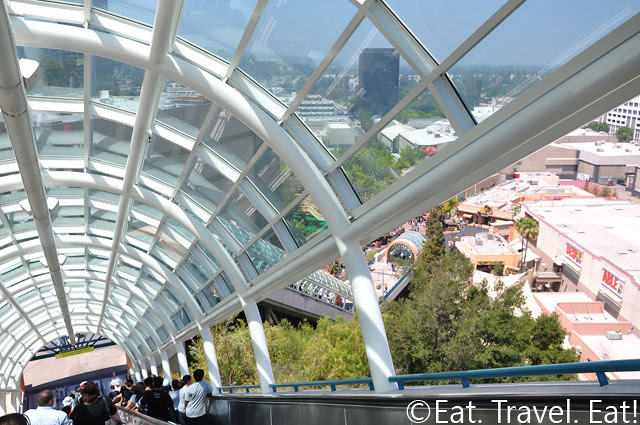 Going downhill, there was a nice view of the surrounding area, and the glass on top had a nice pattern and effect. 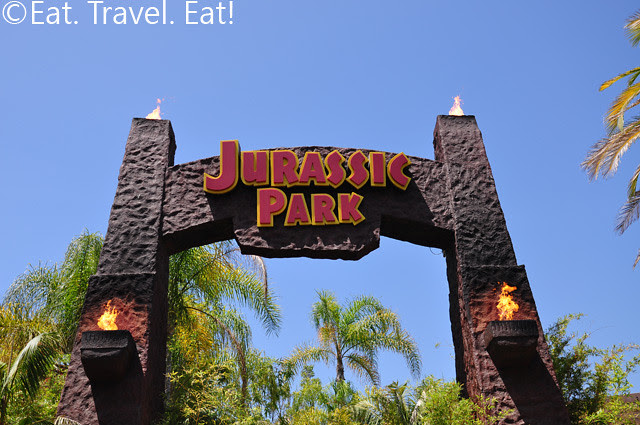 My friends decided on Jurassic Park as the first ride of the day. After all, you could get wet on the ride, and it was hot! 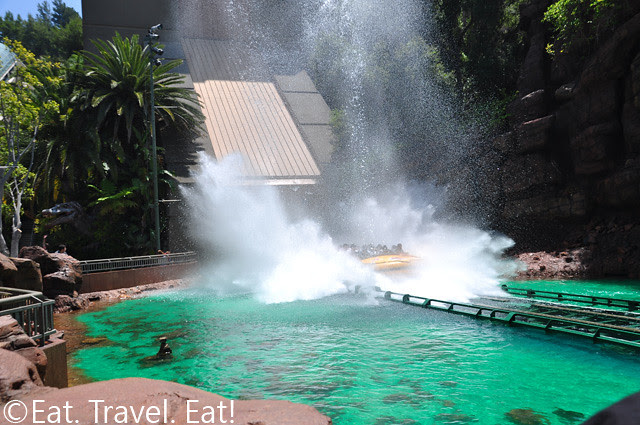 So, I imagined it as another water log ride like at California Adventure- Anaheim and Knott's Berry Farm- Buena Park. Was it? For the beginning, it seemed so. Of course, the theme was different. The water went slowly, and we got a tour of dinosaurs and various chemicals. Then, there were dinosaurs that would spray water, as well as going through tunnels which had water falling from the top in various sections. Then, it was uphill. 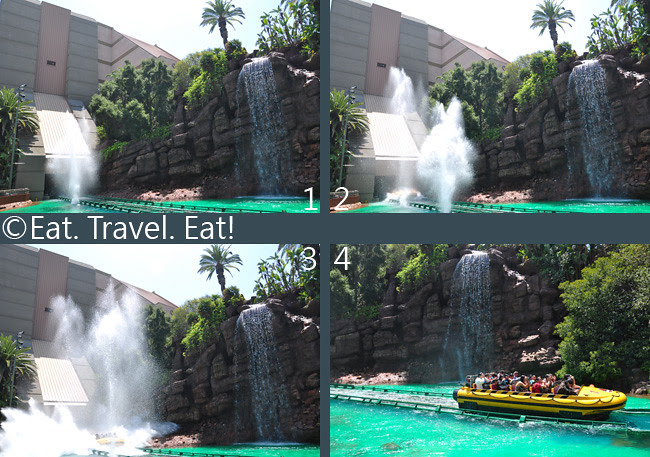 To where? The building. Suddenly, the car went fast, and after a few fast curves it was downhill. For what it seemed, more than 10 seconds. My friends said there was a T-Rex that appeared to scare people even further from the fall, which was steeper compared to Knotts and California Adventure! And at the end of the fall was a waterfall spraying water on top of everybody. As if you weren't going to get wet...

Fortunately, Universal Studios had already thought of ways to not make you feel dizzy after the ride, as they provided paper towels to dry off your hair. I didn't get much wet other than the top, while my friends did from top to bottom. Yet we were all in the first row of the seats!

And an aside, there was a person who was waiting in the line with us who noticed there was a group of people who cut in line. He went off to get angry at them and trying to teach his kids it was bad to do such a thing! I'd say a good thing, but you are on vacation! Relax a bit, while also teaching your kids this important fact. Well you should be, when you are paying a 50+ dollar entrance fee to have a day of FUN. 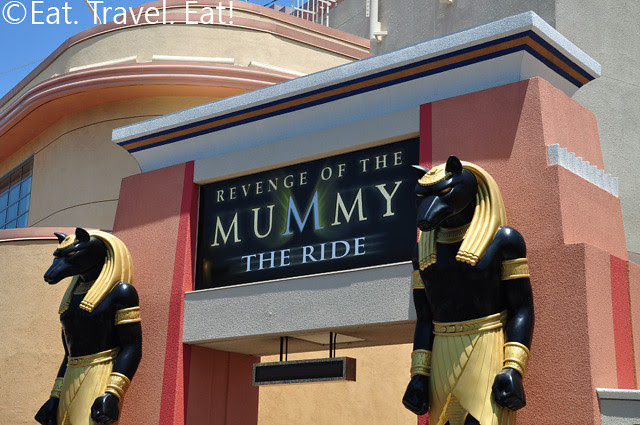 Anyways, next one of my friends thought it would be another great idea to go on the Revenge of the Mummy ride, an indoor roller coaster ride, since it would go fast enough to dry us off quite a bit. And my friend was definitely correct! After leaving the cameras (shudder) and backpacks in the free lockers provided which worked by fingerprints, we headed off to a 20 minute line wait. And while we were waiting, Universal found ways to attempt to scare people. Skulls, a display with a woman talking, places to put your hands in, dark atmosphere, the like.

As for the ride, they found even more ways to scare people. The cars went exceedingly fast and stopped for sections so a person could scare you with scary thoughts like "your souls are mine." Most of the ride was also spent in dark environments, one part even pitch black! And at that point where the above saying was said, we went down fast and for another long length of time. Even that said, the ride was exceedingly short for the wait. Too short! 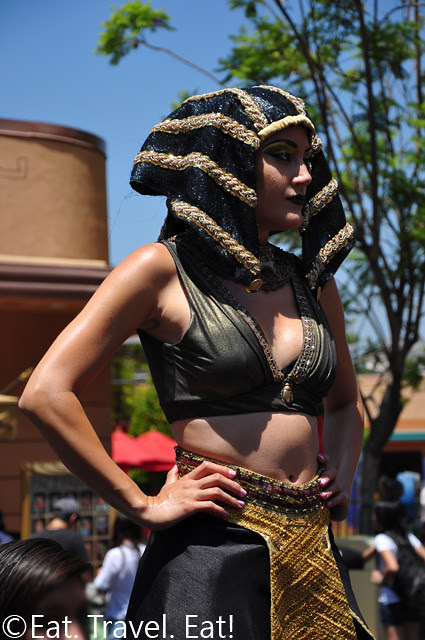 Outside from the ride, a group of employees dressed in costumes came out to attract visitors. Such as this person. But by then, we were looking for lunch. 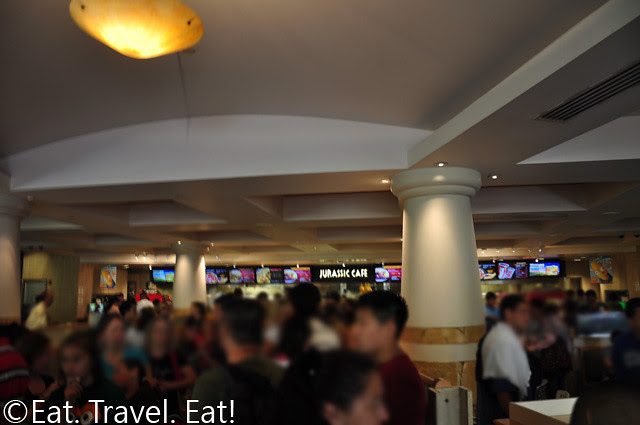 How about Jurassic Cafe? Well, look at that line for food. We were definitely not willing to wait that long. 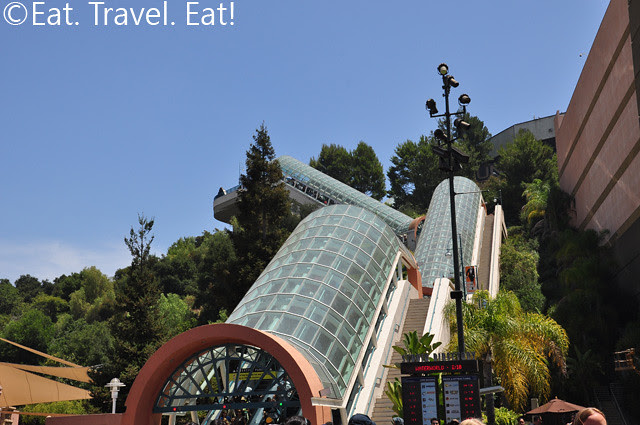 So we went up the Starway again to look for other various food options. After all the Jurassic Cafe was just the only food option available in the Lower Lot, so it would be busy.

But upstairs was no better. People lined up for the Cantina- basically El Pollo Loco. Other restaurants that didn't have a line at 12 had a long wait at 1:30. Not willing to wait, we picked a faster option. 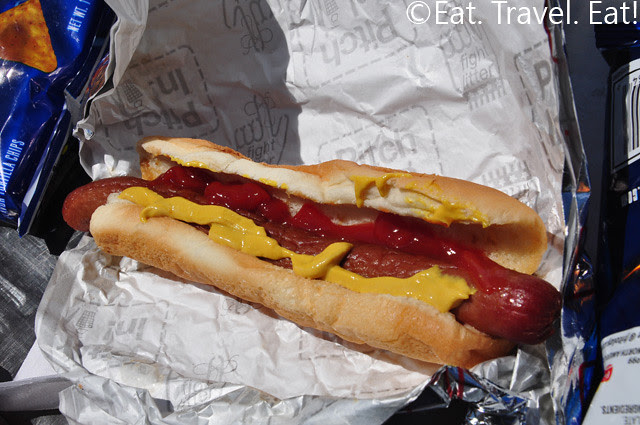 That is, hot dogs available everywhere on little carts. They were done in combos of a hot dog with a bag of chips: Doritos, Lays, or Cheetos, for a price of 6.99 USD. The one we all bought was a "Nathan's" hot dog apparently, but other places across the park branded their hot dogs as "Pink's" and "Dodgers" for the same price. Anyway, the hot dog was decent. The roll was steamed to tender and warm, and the hot dog had a crisp pop to it when you bit into it like a good high quality hot dog should! And the chips, we all had the Doritos Cool Ranch. If you don't like cheese flavored Doritos, this one is the one to try. :) 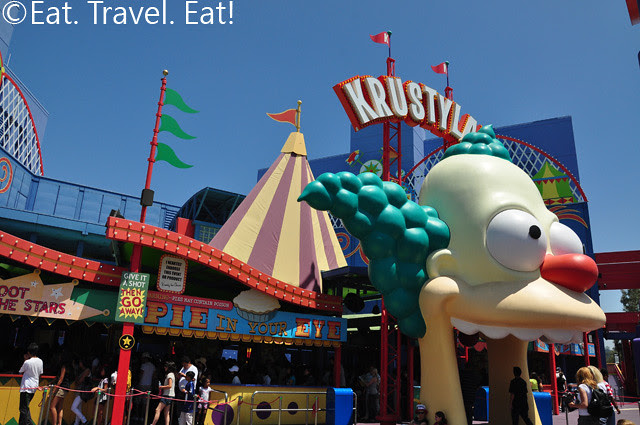 After finishing the hot dogs in 5-10 bites, we headed off to places nearby, one of which was Krustyland. But the wait was too long for a Toy Story Mania like ride, so we went to look at other things. 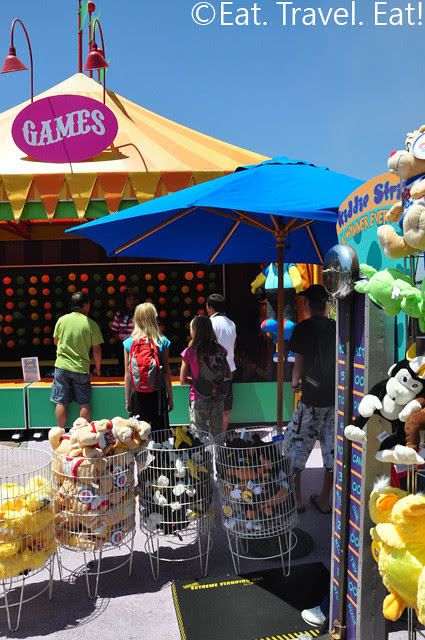 Like games! One of my friends played on the dart balloons in the back of the picture, and won a prize. :)

Part 2, with places on the Upper Lot, is coming to the blog next week. Unless you want a food post. Tell me quick! (Before I upload photos, I mean.)

elmomonster said…
Good job on getting the discount! I would've raised a ruckus too. It's been a while since I let my annual passport expire there. Too far to drive from OC for my lazy ass! HAHA!
September 01, 2010

EatTravelEat said…
Edwin,
LOL! It's the reason why I too didn't buy the annual pass even if it was only 20 or so dollars more. Too far unless it's vacation time!
September 03, 2010

EatTravelEat said…
Mochachocolata Rita,
At least in HK you have Snoopy Park, Ocean Park, and Disneyland. ;). I want to go to Ocean Park! Been so long since I've been there!
September 11, 2010