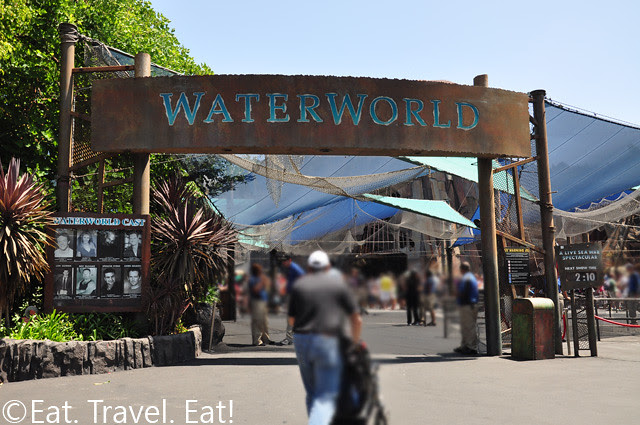 Continuing from part 1 (click *Universal Studios Hollywood- Universal City: Part 1* to read it), we went from playing various games to Waterworld, which Universal Studios describes as "a tidal wave of explosive action" where "the hit motion picture comes surging to live in a spectacular tidal wave of death defying stunts, awesome explosions and an ocean of thrills!" And it was most certainly an entertaining and amazing show.

Inside, things were getting onto the mood. Heroic music was playing, and employees dressed in costumes were getting ready. Then... 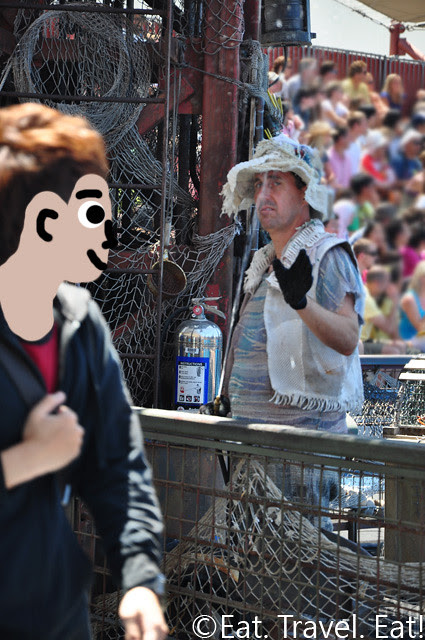 The employees started to have some fun by spraying people who haven't sat down yet. And yes, I was in the wet zone! The show does get wet in some situations due to the quick stunt moves by the ships, which sends water flying all over to the wet zone.

If I hadn't covered the face of the person, you'd see his face looking towards the employee, who was basically trying to act if he did not spray anyone. Sometimes he'd just stare at me so that I would take a picture of him in that manner. The photo above is one example. He would also spray at a kid nearby the water spray, getting several of them wet already before the show started! 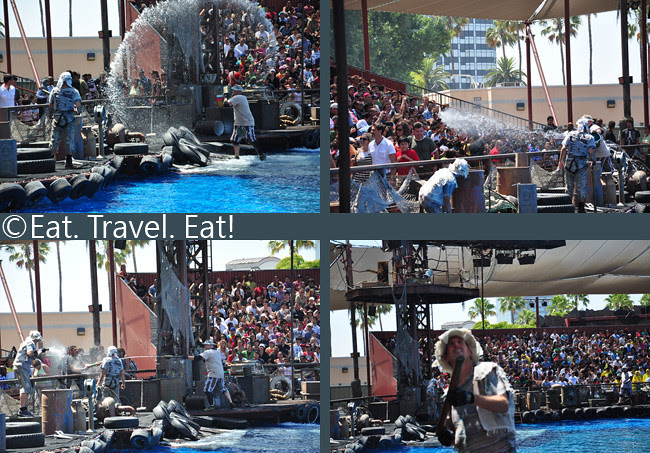 As the audience gathered and filled in more seats, the employees were off from their spraying of people walking by. They were on, full out.

Photo two the top left is one person using a bucket of water and throwing it to the audience. Sounds wonderful right? Picture on the top right is the same person using a water gun to get someone wet. Picture on the bottom left has a group of the employees using their water guns to get a person wet. And the last picture is the staring employee spraying water with his water gun...and with my autofocus not focused on him! 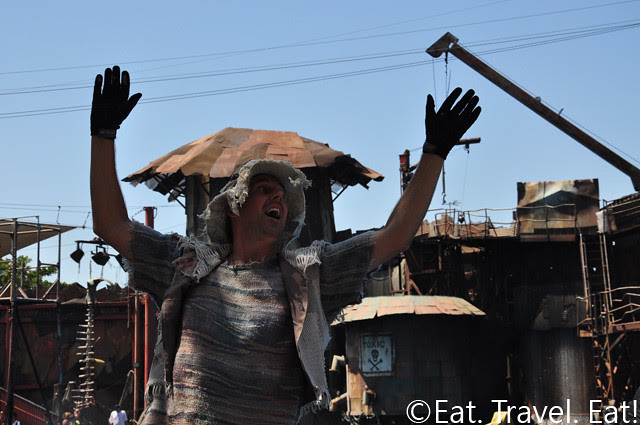 The actors were also trying to entertain and engage the audience. Thus, when our happy water spraying employee raised his hands up, we made a loud sound. Then, different sections of the audience came to get louder, louder, sometimes in bursts in long sections. But never mind that, since the show was about to start! 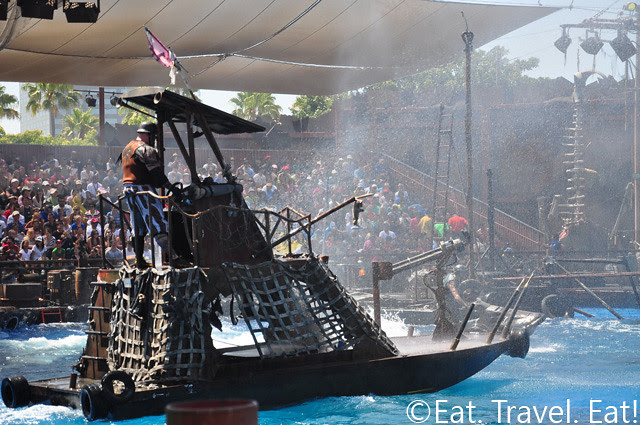 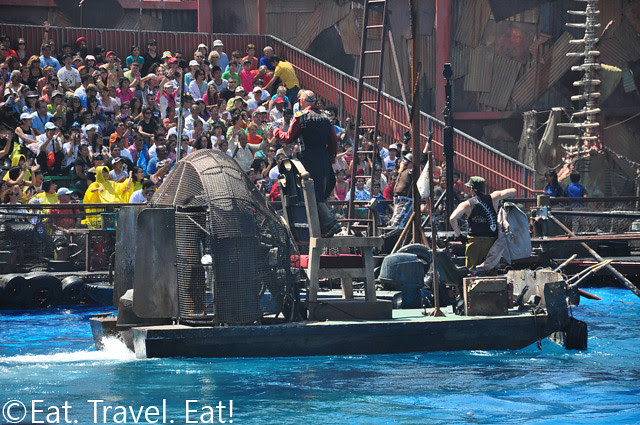 The enemy
The show first started out simply, since the plot was being introduced. Dry land was being wanted, and one person knew where. The enemy on the other hand also wanted to know, and thus some commotion came along. 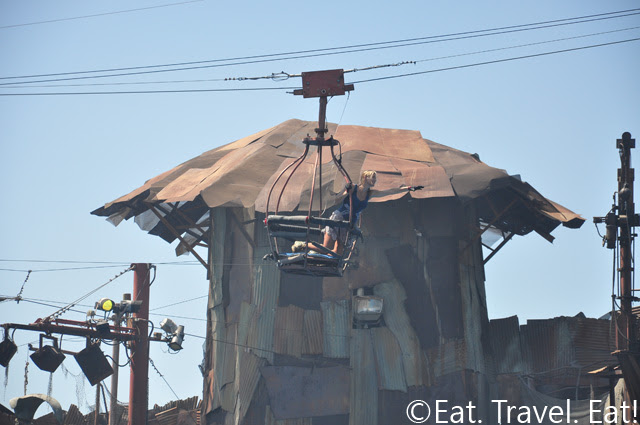 This was much later on during the show with the girl attempting to escape from the enemy, but that's mainly because I was afraid of my camera suddenly getting wet. Now, you may ask, how does one get wet in the wet zone? Other than the employees spraying you with water hoses, there are also aquatic vehicles which move rapidly, thus causing a wave of water to cross the fence and spray the entire wet zone. I got very wet by the end of this, including my backpack, but my camera was thankfully protected by the jacket. :) And on the other hand, my friends didn't get very wet at all. What comes around goes around! 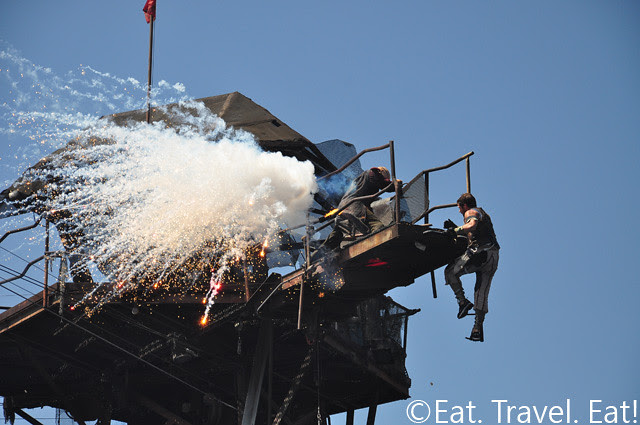 Of course then the plot got more interesting, and as everything got busier, so did the special affects and stunts! Here's the bad guy on top, with a good guy handing onto the fence. He soon fell 30 or so feet into the water...how amazing! 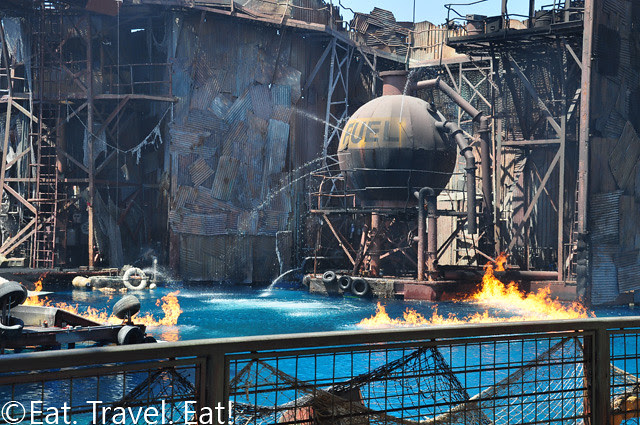 More fighting with bullets caused the stage to then erupt into flames! Soon the fuel tank had an explosion, and we were definitely feeling the heat. Hot weather +  hot flames! 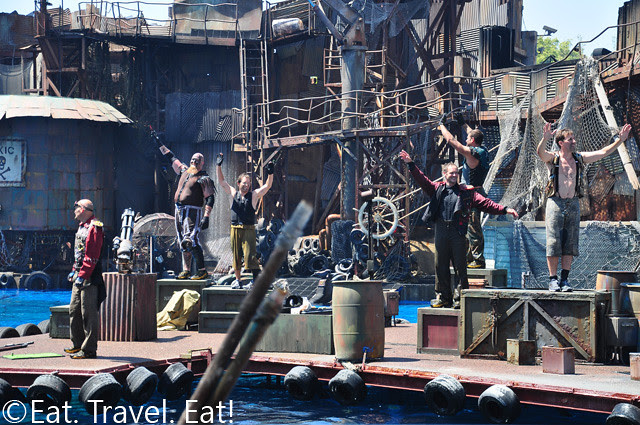 Soon afterward the conclusion came (of course, happy), and then the entire cast came out. Some were from TV shows and movies, surprisingly! 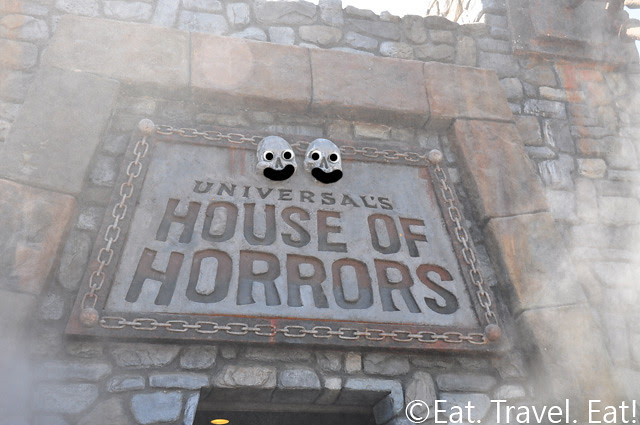 My friends thought it would be great to add another attraction into our day and thus we visited Universal's House of Horrors. AKA something you would see at Halloween with haunted houses! At first it didn't seem scary, since it was waiting in line- movie posters were just placed for scary movies like Cirque Du Freak and Phantom of the Opera. So I felt like we were just going to see what was scary in the history of Universal. (The smiles are to make this place not as scary. I'll leave the description as a you know what.)

Well, that was the most horrible assumption of the day since it was exactly the opposite. It was exceedingly scary and horrifying! The employees would suddenly pop out of nowhere and try to scare you. People nearby would be screaming which would add to the terror. There was also bright flashes, employees attempting to grab you (but they aren't allowed to, so they try to get their hand close), touching weird things (you know what, I don't want to write onto the blog). Most scary was probably going through sections where the entry had a flap covering the top, since you weren't really sure what was ahead. Once someone popped up and screamed at me, and then there were you know whats from the top of the ceiling that you had to touch to get through, et cetera. And of course the camera was stashed in my backpack. I'd assume the lens would probably have been damaged if I had let it hang on my neck. No thank you!

*You know whats are things you would see during Halloween. 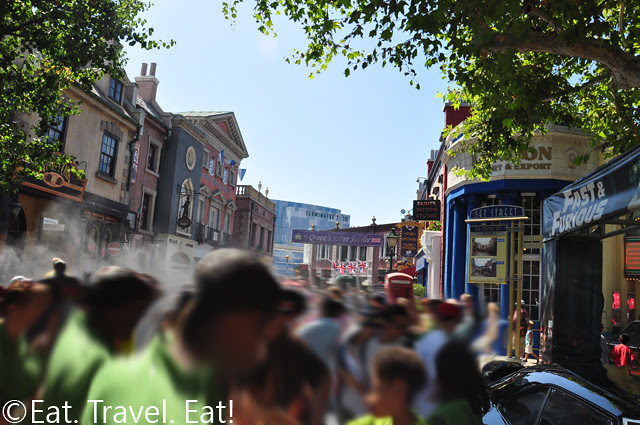 After what seemed like forever (although there are exit signs, they do not signal the end of the house path), we were finally out and recovering from the experience. It was definitely a heart beat increasing activity with scary thoughts trying to be implanted into the mind...but the outside was completely different! Happy, pretty British themed area and more. :) 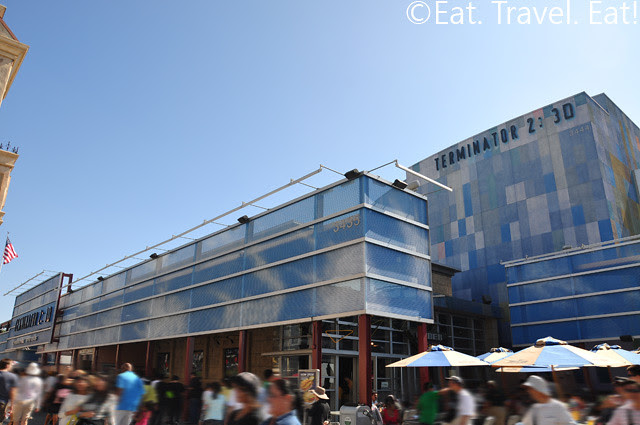 We were still in for another attraction, so right after visiting the House of Horrors we passed by to Terminator 2: 3D. Now this one also had a long wait, probably about 30 minutes in a snake like formation. Water misters and TV's kept waiting people entertained, but by then you really had nothing to do other than go play on a electronic device or chat. Plus the TV's were on a constant loop. 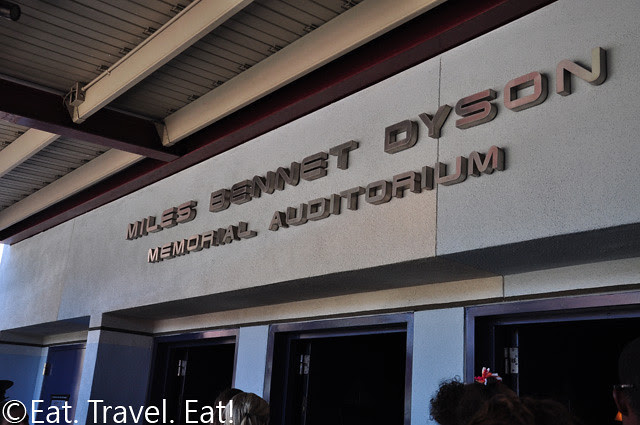 We rushed into the auditorium after picking up some 3D glasses. After all, who would want to wait several more minutes for the next showing? 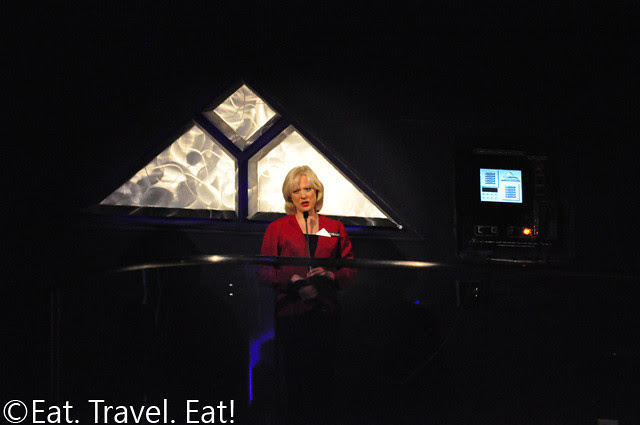 Inside, a lady introduced the audience to "Cyberdyne Systems," a company that was going to apparently make peace. But as the promotional video was showing, it was suddenly cut with some people saying Cyberdyne was evil, and would destroy the world. The lady then got very worried, trying to press buttons on the side screen. By the end of the presentation she tried to claim herself right. Who knows...but by then we were entering the movie showcase.

The movie was in a large hall with a large curved screen which made Cyberdyne appear strong...until the intruders who said Cyberdyne was evil came in! Then the movie started, which was a mix in 3D as well as physically appearing. But obviously, Arnold Schwarzenegger was portrayed  by someone else, which didn't look much like Schwarzenegger but it made the point. :) 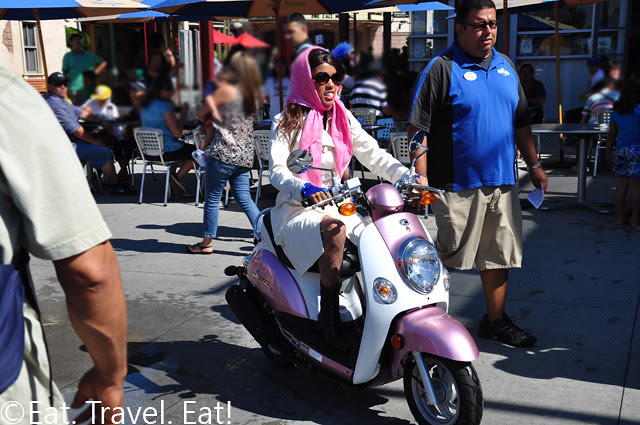 After the movie showcase we passed by the store for the Terminator 2: 3D, which was interesting in the fact it had fake award trophies for sale and Twlight stuff...how does this all relate to Terminator again?

Then, outside we saw a fleet of motorcycles driving across. Kind of like the people singing and dancing next to the garbage car earlier in Part 1, these motorcycles were just trying to get attention. This wasn't the only car appearance during the day, there were others that I didn't take pictures of...some with negative connotations, some the other way around. 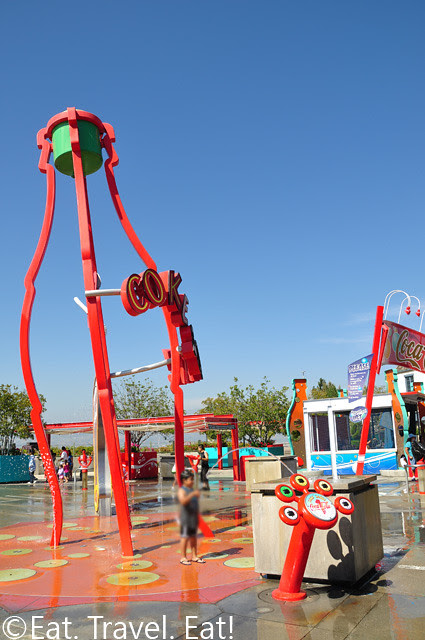 Nearby was the Coke Soak, so we took a look. Basically it's another water zone with water guns and buttons to operate water streams so people can get wet! 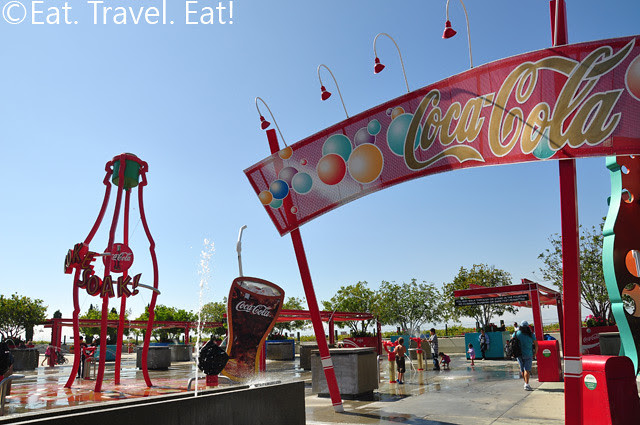 Here's another view with the Coco-Cola sign in the picture... 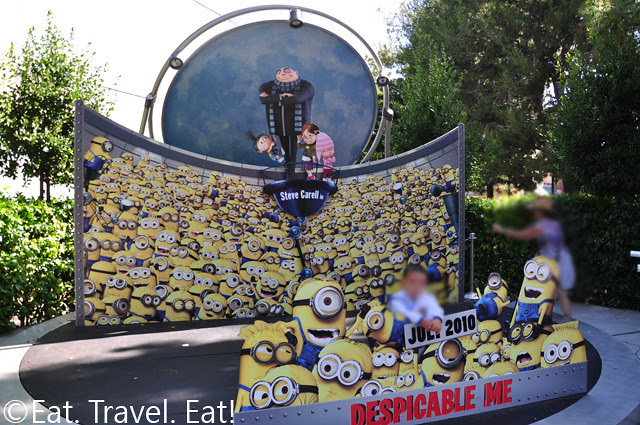 While walking by to go to the Studio Tour, we passed by a section for Despicable Me for photos. Unfortunately too many people wanted a picture with this, so just just took a look and left. 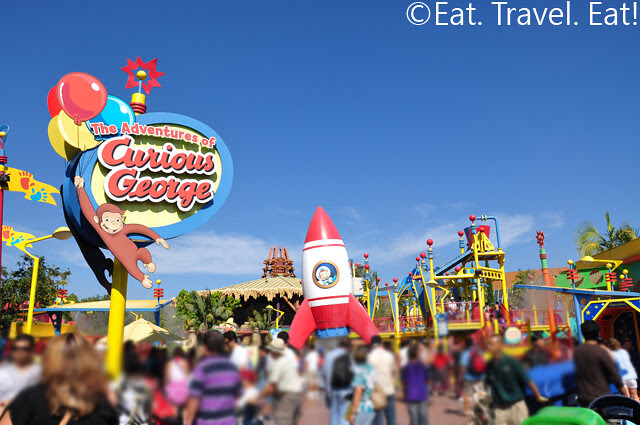 Nearby the Studio Tour entrance was The Adventures of Curious George, yet another water zone! Lots of people were playing here, all dressed in swim suits (mostly). In fact, Universal had already thought of the concept well. If you get wet, you could get dried off with a so called dryer that you had to pay money for. Genious! 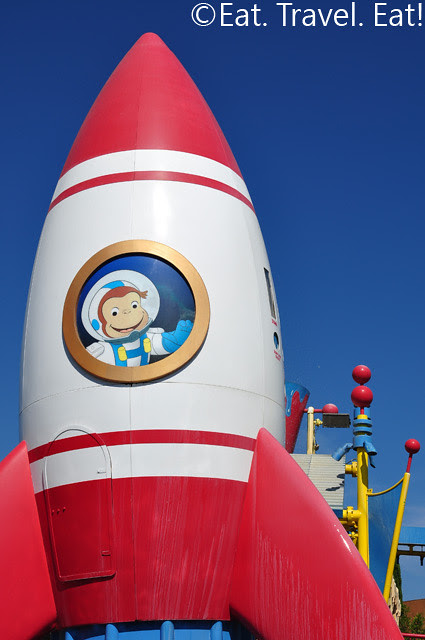 The main attraction here was the rocket of Curious George, because this activated the water systems. Although there would be water guns already, the water guns had to hit the buttons to the side of the rocket long enough so that an alarm would turn on, and then fill up a bucket which then went down like this: 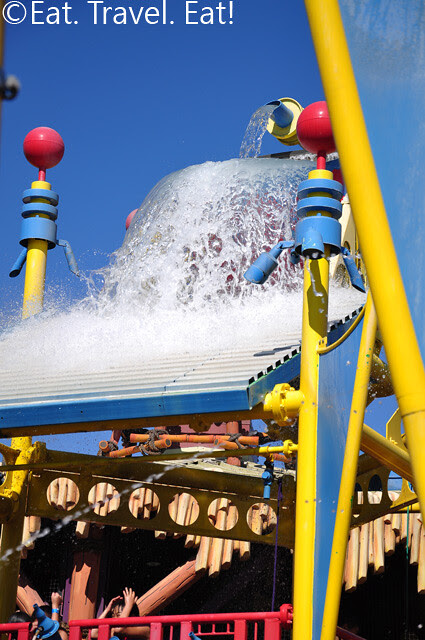 Dave said…
Just came back from Universal Studios, Singapore and it's amazing how the Waterworld set is exactly the same as the one in Hollywood. Seeing this post reminded me of how incredibly amazing the whole experience was. The actors started out spraying everyone, engaging them before the actual show. The actual show was more than mind blowing. Great stuff.
September 26, 2010

EatTravelEat said…
Dave,
And it sounds exactly like the Hollywood version! Is your trip why that you haven't been posting recently?
September 26, 2010

Dave said…
Well, the trip is one of the reason but the main reason is laziness. ;( I'm going to get back to posting regularly soon.
September 26, 2010