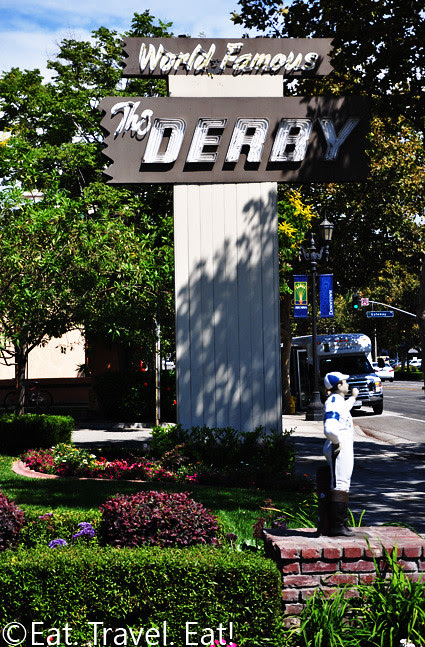 When talking about high end restaurants in Arcadia, there really are not many. Sure, there are plenty of pricier restaurants like the Cheesecake Factory or Din Tai Fung for that matter, but both are really quite casual. Moving onto more formal restaurants, we have hotel restaurants, Santa Anita park's own restaurant, Sesame Grill, and then the Derby, probably the most expensive of them all. 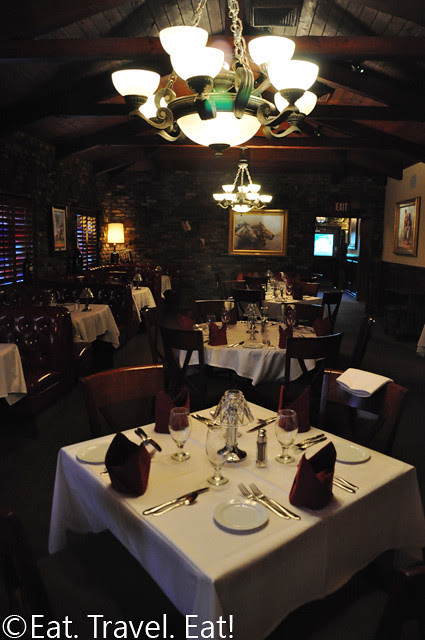 The Derby is a long time restaurant in Arcadia, but I have never tried it before until this year. It is a very popular option for people watching races at Santa Anita Park, obviously due to the horse inspiration of the Derby due to Seabiscuit's owner actually owning this restaurant for some time as well as its general classiness. The Derby ticks off plenty of fancy check marks: business casual suggested, free valet parking, and expensive prices on the menu overall, whether it be lunch or dinner! 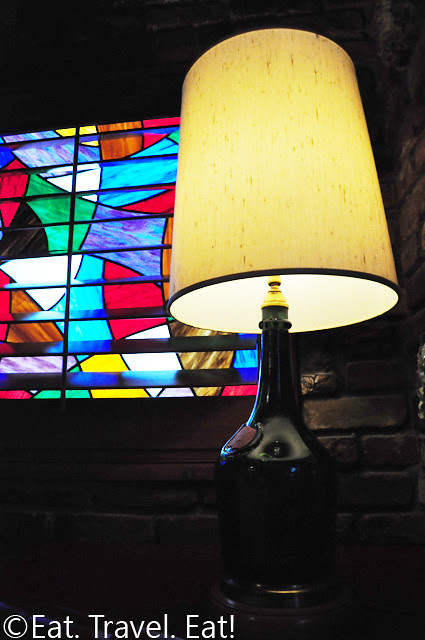 The atmosphere was quite dark. Don't let the photos fool you, I edited them so that they wouldn't appear completely dark.You would be seeing very little otherwise! 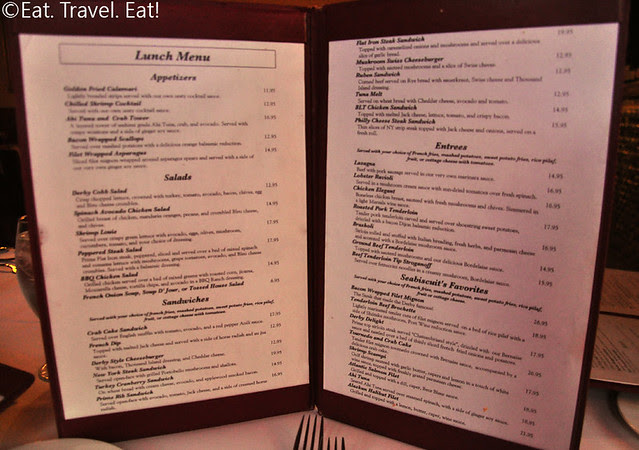 After sitting down we were promptly given menus, which were split into these sections: Appetizers, Salads, Sandwiches, Entrees, and Seabiscuit's Favorites. Prices were all in the double digits, from 10-40 dollars. Prepare to spend plenty! You can still save some money though, by going to Costco and getting some gift cards for the Derby at a nice discount. 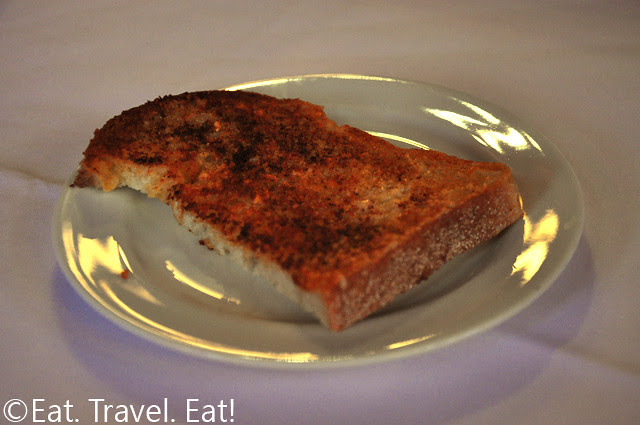 The server came by later to give us some cheese bread from a bread basket. Plain white bread cut in half, with butter and cheese on top. Nothing really special but something nice to munch on. If you like the char, you'll like it; as for me, I didn't care much. 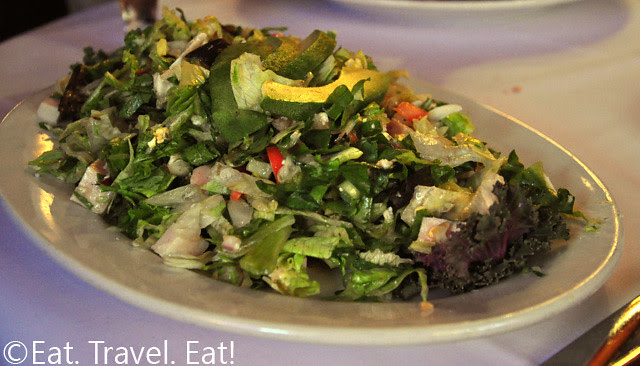 It took some time for our entrees to arrive, but they all arrived at once. One of my dining companion had the Derby Cobb Salad (12.95 USD) which had lettuce, turkey, tomato, avocado, bacon (we excluded this), chives, egg, and bleu cheese crumbles. It was a tasty salad, but nothing too special. Traditional American style, yes. 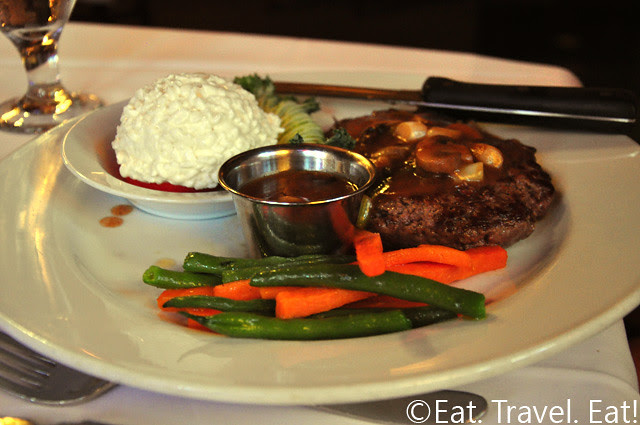 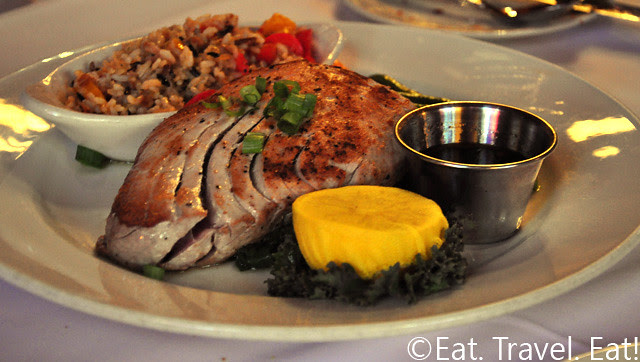 My other dining companion ordered the Ahi Tuna (18.95 USD) which had a seared ahi tuna steak served over steamed spinach with ginger soy sauce served on the side as well as some rice pilaf (again, you pick the side). I did try a piece and it was very nice, the inside was still rare while the outside was lightly crisp. The ginger soy sauce gave an Asian inspired flavor which was quite nice. 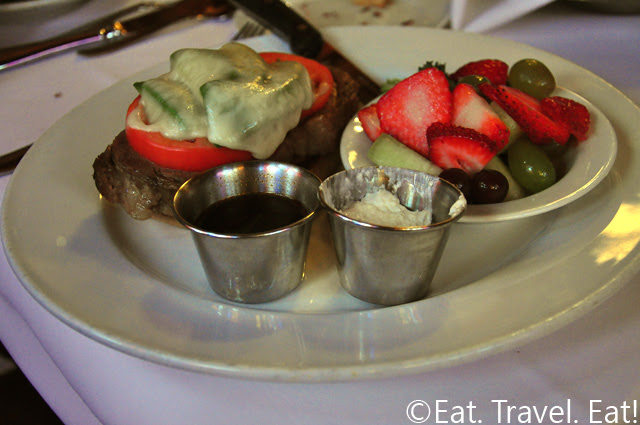 As for myself, I had the Prime Rib Sandwich (16.95 USD) which was served open face with avocado, tomato, Jack cheese, and creamed horseradish along with a side of fruit which consisted of honeydew, strawberries, and grapes. The bread was a toasted sourdough, and the prime rib was firm, if not very tender. There was aj jus, but since the prime rib was not very tender, I dunked it more into the horseradish instead for a slightly spicy taste. As for the tomatoes and avocados they were slightly warmed from being under the broiler to melt the cheese; I ate them separately. Overall, quite nice for a prime rib for lunch, but again, not too special. 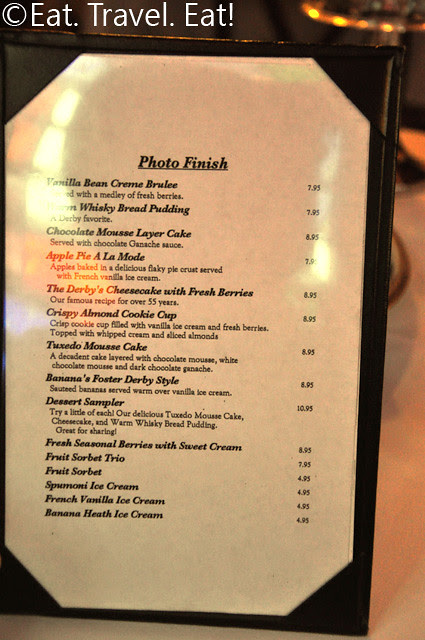 After finishing the entrees our server handed us some dessert menus to look at. Like at Aureole, we decided on the Dessert Sampler, which took a while yet again to arrive. 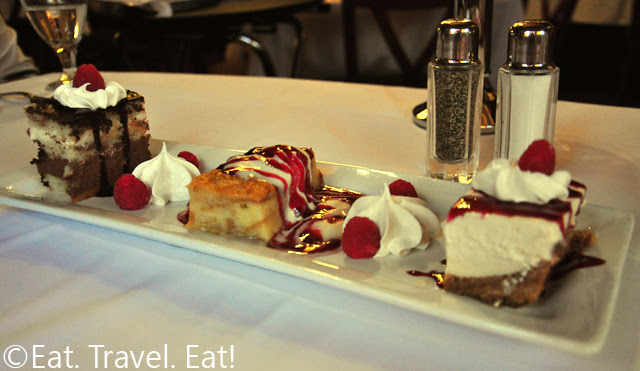 The Dessert Sampler (10.95 USD) had an wide assortment of traditional American desserts, like the Tuxedo Mousse Cake (left), Warm Whisky Bread Pudding (middle), and the Cheesecake (right). The Tuxedo Mousse cake was quite chocolatey with thick ganache and creamy chocolate mousse with light sponge cake in between. The bread pudding was quite delicious; sweet with a hint of alcohol bitterness which went great with the raspberry and white chocolate sauce poured atop. As for the cheesecake, it had a sweet graham cracker crust, and the filling quite interesting- it seemed like there was some extract that they put in that made it quite unusual- almond or cherry, I'm guessing. Obviously there was some vanilla, but the other flavor I can not discern... Overall quite a nice traditional American dessert, a bit on the sweet side but as the menu says, "Great for sharing!"

Overall, a nice traditional American meal at the Derby. They have changed owners in the last month or so after this visit, so I'll have to go spend the rest of the gift card money to see if the food has improved more or not.

*P.S. Sorry for not posting last week, my schedule is quite busy nowadays...

Protocol Snow said…
I've never been to Derby, but my brother used to enjoy going with his friends whenever everybody returned for Christmas vacation. These days however, they just say "screw it" and drive all the way to Beverly Hills for CUT =P
October 31, 2010

Sue said…
Ah, dimly lighted restaurants, not a big fan of those...I like to see what I eat, nice and bright!

EatTravelEat said…
Protocol Snow,
Haha, that's far out! Maybe someday, although I don't care for meat that much.

Sue,
I've been to ones darker than this one! Actually, had I sat on the other side of the room, the food would have been quite well lit.
November 05, 2010