Last time we talked about Orange County, now it's Los Angeles for a twist before I go back to restaurants in San Gabriel Valley again. When we were going back from Steinway and Il Piccolino last time, we drove by Tahoe Galbi, and a thought came into my head that Wandering Chopsticks had wrote about it before. We went back to LA in hopes of trying Spago after visiting the places we needed to go, but when we saw the customers going in, they seemed as if they were dressed very formally, and we were not. My dining companions did not feel right eating there in casual clothing (although that was permitted), so we decided to find a casual option based on Korean food since Koreantown was close by! After driving by Tahoe Galbi again, we noticed a small, dimly lit restaurant with plenty of customers, but with problems on finding parking we just went to Tahoe Galbi. After getting our car in the valet (2 USD), we went in, only to find a long waiting list plus the smell of barbeque.

No problem, the lady just wrote down our name in Korean, and we were settled into watching Avatar on their LCD TV for about a hour. In between that time period we analyzed the different all you can eat options (divided into several tiers), as well as seafood options. We also observed what other people were eating in hopes of knowing what to order with the all you can eat deal! 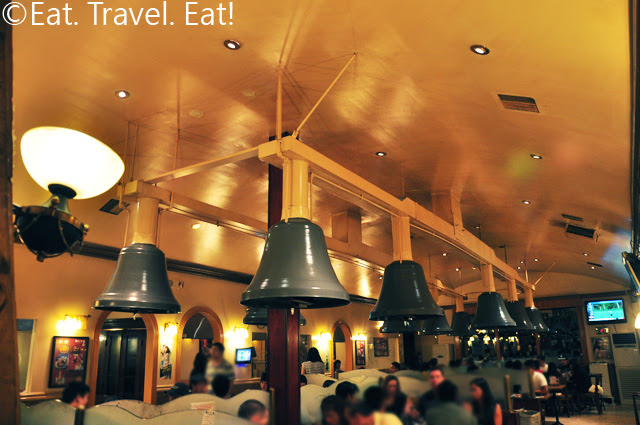 Inside, the bell shaped smoke vents were probably the most interesting thing of all. We were seated in one of the side zones, where large groups were situated in long rectangular tables  and small groups were seated next together with dividers. 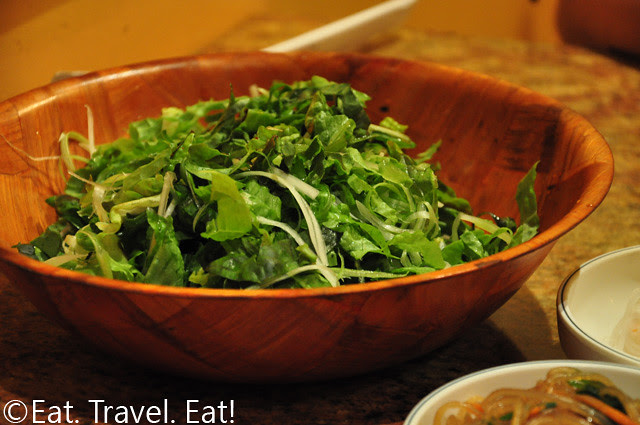 When we arrived at the table, it was time to eat. Immediately, that is! All the banchan were already set on the table anyway. 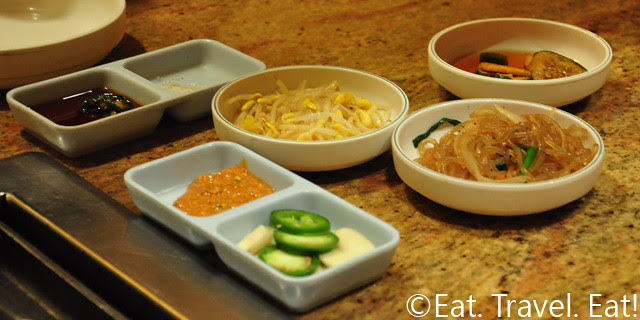 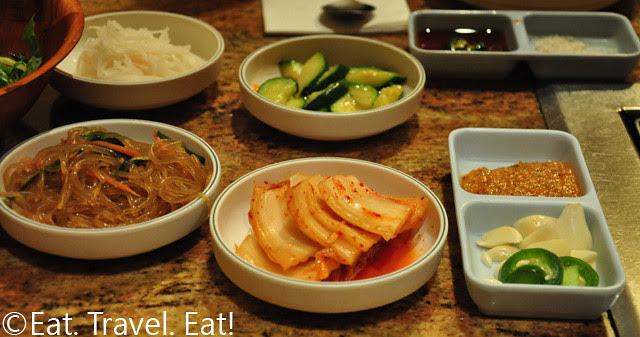 The banchan spread was not very impressive, but there was plenty, including: japchae, napa cabbage kimchi, zucchini, bean sprouts, shredded daikon radish, and a marinated cucumber mixture. There was also salad with shaved scallions which was tossed in a tart soy sauce/vinegar mixture. All of it was certainly quite tasty, and we ended up ordering plenty of refills to aid with the meat. Besides, we already finished the majority of the banchan by the time the server came to actually take the meat orders. But where was the meat menu? 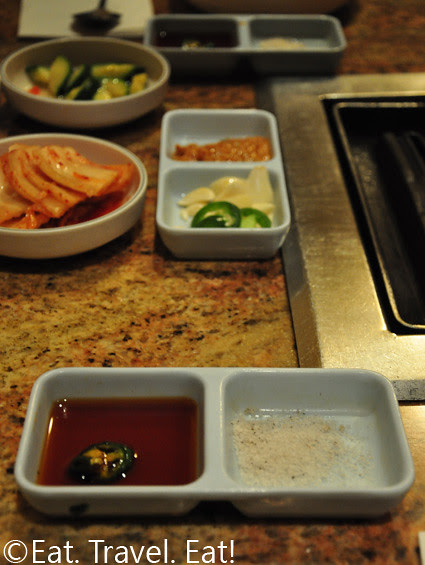 Well, there was none. And the server came without a menu, so I made up choices: BBQ beef, pork, and chicken as well as their "vegetable" and miso soup and steamed egg. Actually, the steamed egg was not even part of the 17.99 menu, but the server said nothing about it. However, since they never served it and another server said,"You can't get this," we just left that as is.

No rice /radish/lettuce wrappers were provided either. You had to ask for those, and I forgot to ask to see what all the hype was about on the rice wrappers!

However, a tart soy dipping sauce was provided as well as salt, fresh garlic and pepper, and a bean paste. 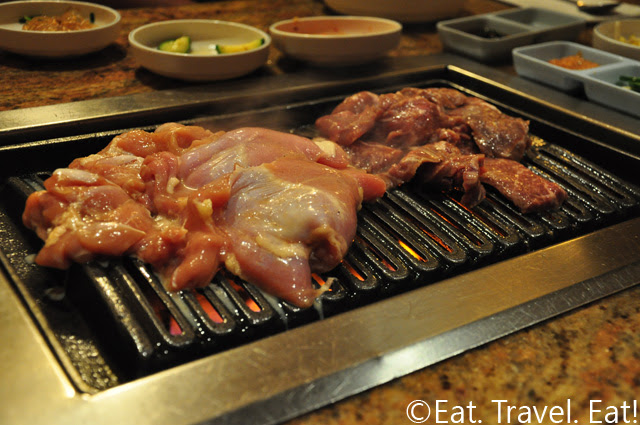 The meat arrived quickly, and the server put the beef onto the gril for us first.

But, isn't that beef not the marinated thin shaved bulgogi? Doesn't that look much more like kalbi instead? Well, it probably was, and tasted like it. The meat was tender with a bite, and since we controlled the grill, we left barely any black char on it! However, we all agreed that the marinade was quite weak. BCD Tofu House served better. I found myself actually dipping all the meat into the dipping sauce, since there was not much flavor. 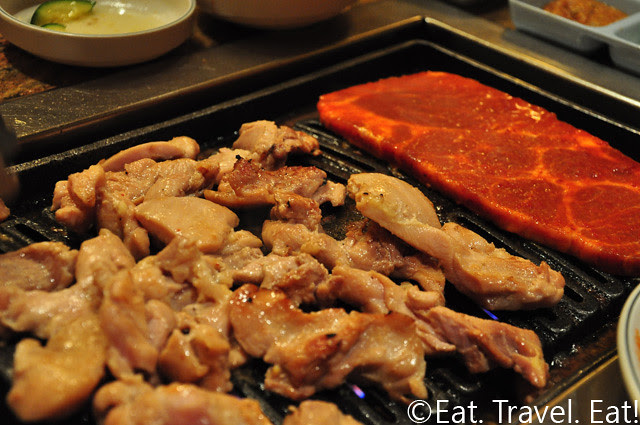 The chicken took a long time to cook, so take note: if you want chicken, ask for a smaller portion! The chicken and the pork portions were gigantic, and after ordering those we didn't want to order much else since there was plenty of meat. I'd suggest you to request smaller plates, e.g. say I want a half portion. Otherwise, you won't get around trying a lot of different meats.

As for the chicken, it tasted fine being quite tender and juicy. But it was not very flavorful in the marinade either, although the final result as you can see did have some browning. 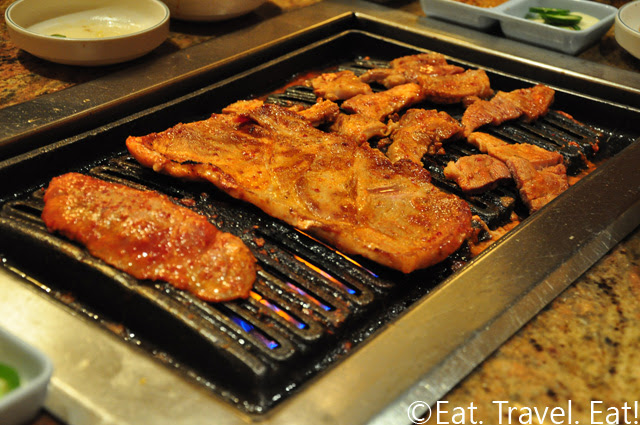 With the chicken out, it was time to focus on the pork grilling. Here is what I am talking about: isn't this a lot of meat? And it was only one plate. Suffice to say we stopped grilling for a while after the pork was done and concentrated more on enjoying the food. The pork was lightly spicy and tender and juicy, but yet again the flavor was quite muted. More panchan came, and we even got some new ones like potato salad which was a refreshing cool break from the meat. 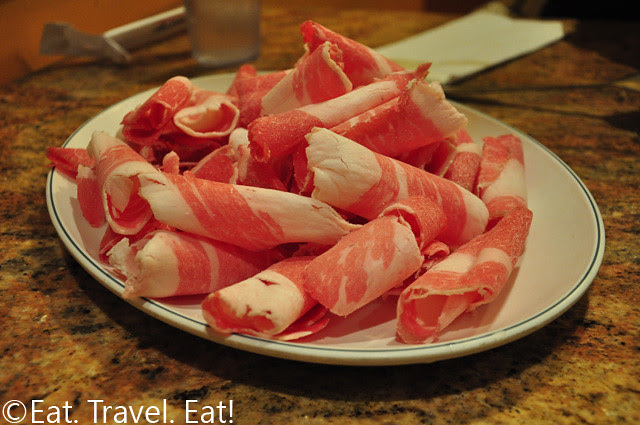 After a short while, we decided to order some more meat. Since the party next to us who seemed quite experienced with ordering started out with the beef brisket for their meal, we also wanted to try it. This was quite nice, with the thin slices of beef. With the dipping sauce it was quite nice! I could also see why the party next to us started with this first: marinated meats get the grill quite dirty. The brisket did not, and thus you could keep on grilling for a while, transitioning onto the grilled meats. On the other hand... 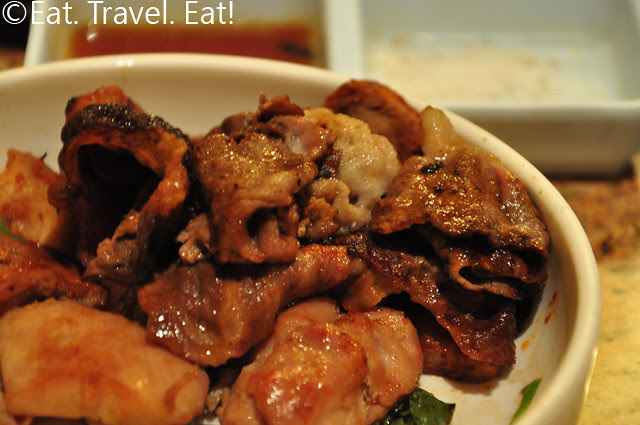 ...with our beef briskets, tiny bits of char left from the marinade on the grill got stuck onto the beef brisket while grilling. Another positive of the brisket was that it cooked very quickly and thus you could eat it almost immediately! This all-you-can-eat experience does require some experience on how to get the best experience+most dishes tried. 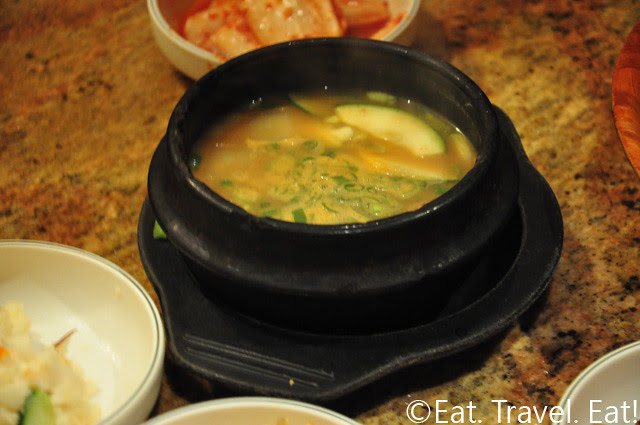 It took a long while, but the Miso Soup finally arrived soon. It was on the salty side, but otherwise it was nice for a soup and plus, it had pieces of zucchini and other veggies in it. All the better! Somehow, we got three due to my constant pestering, and supposedly we were only allowed to have one. One server noticed we had three and was not very happy, but shrugged it off. Besides....we probably didn't consume that much meat anyway in contrast to other tables! 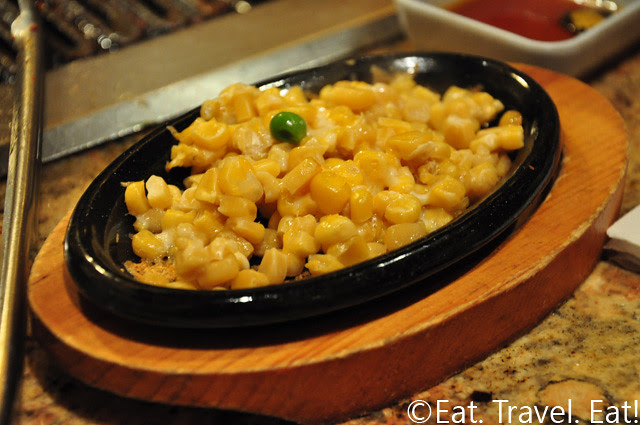 The so called fresh vegetable was actually a diminuitive platter of canned corn topped with some cheese. Nothing special, but since we wanted some veggies we ordered two plates eventually. 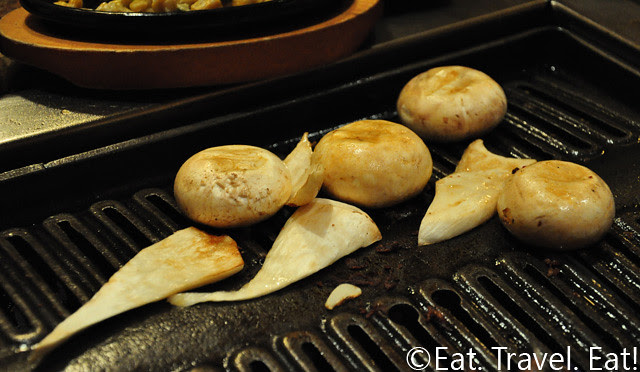 But HEY! The other table next to us ordered mushrooms. Just another example of our newness to this all-you-can-eat-korean-bbq aspect. You could really request anything, and this mushroom plate was quite nice. Plenty of king oyster and large button mushrooms. By this point we were getting quite full, but the value proposition didn't seem very well filled due to our lack of experience in ordering special things like this mushroom. If I had known earlier, I would have probably ordered two dishes of this mushroom as well as other various veggies! Plus I would have ordered other types of meats if there was a menu on the table. All this is just a example on how lack of experience does not yield fantastic results. And in this case, I was feeling that way. Since this was my first time with AYCE, I really did not get to take advantage of what was offered, taking in more conventional choices instead of the special stuff!

And dipped in the dipping sauce, these mushrooms were quite tasty. Although they were quite good by themselves anyway.

My dining companion saw that there was small intestine on the menu and since he rarely eats it decided to order it for this special event to close the meal. This was a half portion, but there was plenty! The intestine shrinked right when it hit the grill, which was shocking. With the cut of some scissors provided, it was much more manageable. However, it was quite chewy, which we fixed by letting it sit on the grill even longer. But by then, we noticed that the intestine was not very well cleaned and the taste was quite off putting compared to how it usually tastes. 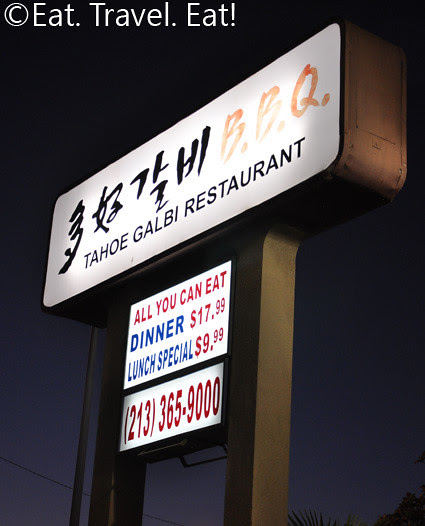 We left Tahoe Galbi quite late, and the wait had almost vanished.  was in the credits section as well. All in all, this was a fun experience. The feeling in the restaurant was very lively and that alone made for an interesting dining experience. As for the food however, one dining companion that knows Koreantown much more than I do said he's had better, and it certainly wasn't that exception. Additionally, what we experienced this visit sure did not seem to be as value filled compared to how other people experienced- there were more banchan options+steamed egg and the meat portions were smaller so you could try more options from what I saw. But at least now, we know what all the hype is about on all-you-can-eat Korean barbeque!

Want to try it out yourself? I'd say go visit any AYCE Korean BBQ restaurant when there are less people so you can get more instructions and not feel so rushed, and thus get more return on your money. Or, bring a friend who knows how this system works for a fun time.

EatTravelEat said…
Aleixpetersonn,
Send me for an email for details but I don't see how any of my content relates to yours, deleted your comment due to your linking.
October 20, 2010

EatTravelEat said…
Mochachocolata Rita,
Haha, be careful of your meat intake though if that matters still!

Jules,
Thanks! I'd check other websites as for Korean BBQ too, there are plenty of other ones that I haven't tried that are definitely better than this one. :)
October 20, 2010

Wandering Chopsticks said…
The long wait is why I don't go there for dinner anymore, just lunch. I've never had them refuse to give me the steamed egg, especially because it's so cheap. I'm all about the brisket these days. I like the dipping sauces so just plain meat is good. Plus, it doesn't leave me so full afterward. But yeah, it's best to go with someone who knows what's missing so they can tell the wait staff to bring it.
October 20, 2010

Sue said…
If I hadn't grown up in this KBBQ culture, I'd be quite lost, too, haha. Bringing a friend who knows how the system works is a smart idea :)

By the way, the best place for AYCE KBBQ is Odaesan on Olympic Blvd! Their meat quality is much better than other places. You should go there next time ^^
October 21, 2010

EatTravelEat said…
Wandering Chopsticks,
They said it was not part of the meal plan...yet we were paying the standard pricing. I do like how the brisket is light in terms of meat, but it's kind of fatty too.

Sue,
Yep, quite definitely! Thanks for the recommendation, although I don't think I'll be doing AYCE BBQ very soon. I don't even do buffets very often either.
October 21, 2010

Protocol Snow said…
I still don't think I've found the perfect AYCE Korean BBQ place. Either the meats are low quality, or the service is so bad that I'm waiting forever for them to bring me some more food.

Though I haven't been to an AYCE BBQ place in quite some time. These days, I prefer paying more for better quality meats =)
October 23, 2010

EatTravelEat said…
Protocol Snow,
Ha, I'll probably try the other direction next time where you pay by plate of meat. :)
October 24, 2010