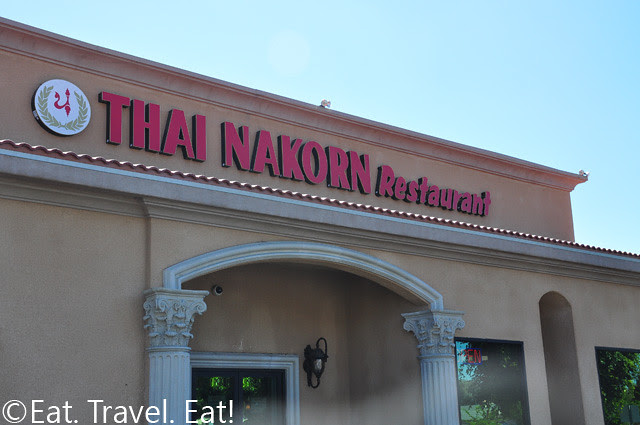 It so happened to be another UC Irvine visit again due to the start of their school year, so what would we do a fair morning at UC Irvine? Lunch of course, but where? Charlie Palmer? Not today. Pippin @ UCI? No, it would feel like a waste of money since other dorms at UC Irvine got free dining passes during move in day.  My dining companion didn't mind driving far, so I suggested Thai Nakorn thanks to the reviews by Elmomonster and KevinEats. I didn't know that Garden Grove, at least for Thai Nakorn, was so far from UCI when I inputted it into the GPS. A grueling 30 minute drive later thanks to the GPS route going local most of the way (instead of going a further distance by the freeway), we were there. 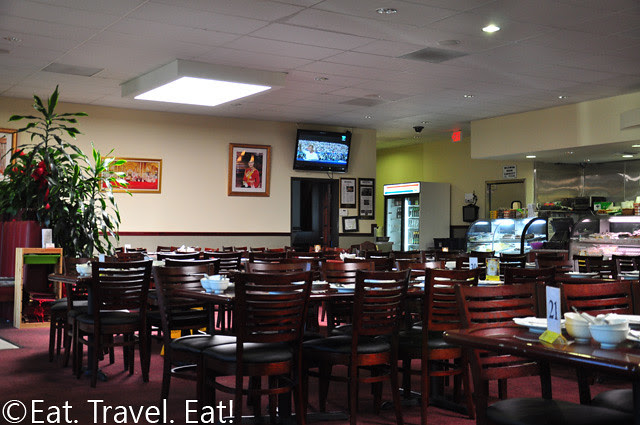 It was quite surprising to find the restaurant empty, although by the time we arrived it was a late 1:30PM. There were only two or three tables that had people sitting, and in such a large restaurant (you see only about 1/2 of the restaurant in this photo) it felt very cold feeling, added even further by the fluorescent lighting. 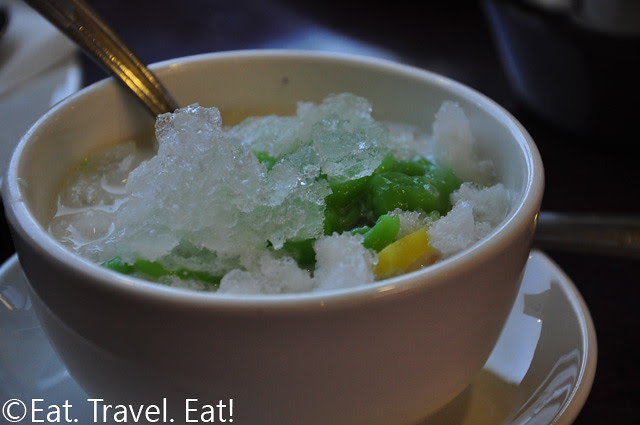 While we were looking at the menu, one of my dining companions went to the counter to look at what was available, and decided to order a Fruit Combination (about 2-3 USD), which had coconut milk and various canned fruits and pandan jelly topped with crushed ice. 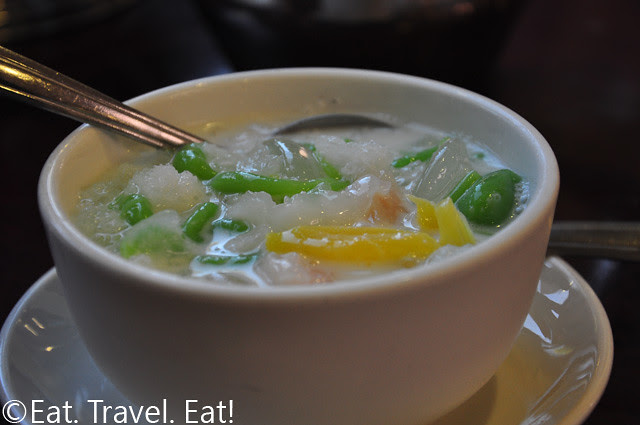 After mixing, it looked like this. There was a lot of various fruits yes- palm seeds, jackfruit, and other various fruits, but all were canned. The pandan jelly was tasty though. Furthermore, the coconut milk was also from a powder. It was quite canny and lightly coconut-y in taste, but not the entire table liked it. One of my dining companions really liked it, the others didn't at all. We should have ordered the sticky rice with bean dessert instead. 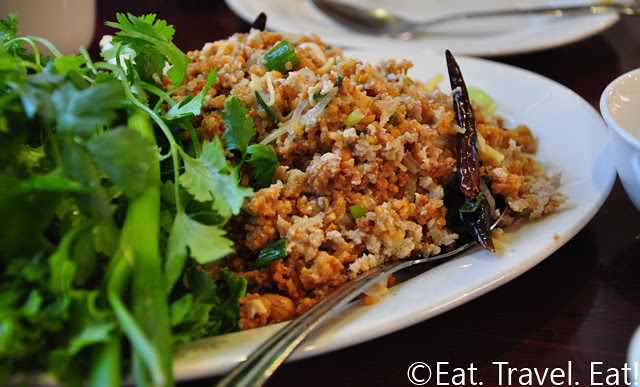 In an effort to make some better decisions as to what to order since I had no clue and didn't want to order too oily dishes, I was deliberately looking at Elmomonster's multiple reviews of Thai Nakorn to see what to order but the pages loaded too slowly on the phone. And thus I didn't know that the Nam Sod (with Crispy Rice) (8.45 USD) which my dining companion ordered, would not be very good. 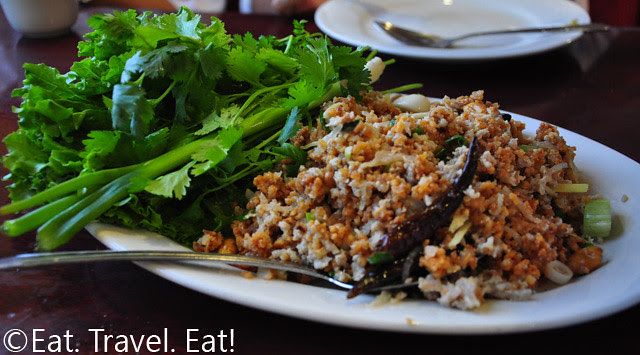 The regular Nam Sod would probably have been much better, as this ended up way too dry in terms of the crispy rice  as well as being too salty and oily. The crisp rice, as Elmonster said, only distracted the diner from the flavors of the meat, and it certainly did. The subtle lime and fish sauce flavors for the Nam Sod were quite subdued and I just kept getting crispy and salty flavors thanks to the rice. No fun, plus a waste of money since this was left mostly uneaten. 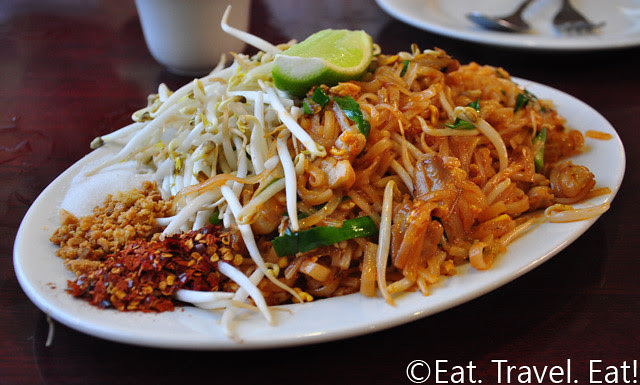 Tell me now, is pad thai supposed to have ketchup notes when you taste it? Because that's what I kept encountering with Thai Nakorn's Pad Thai (8.00 USD), with the shrimp omitted. The ketchup flavor was not as strong as what I had in Guangzhou and Hong Kong, but it was definitely there. We did leave out the sugar and the hot peppers, but otherwise the dish was fine other than the ketchup flavor that my dining companions all agreed there was. Is this ketchup flavor authentic at all? I sure didn't see it in Lotus of Siam- Las Vegas. 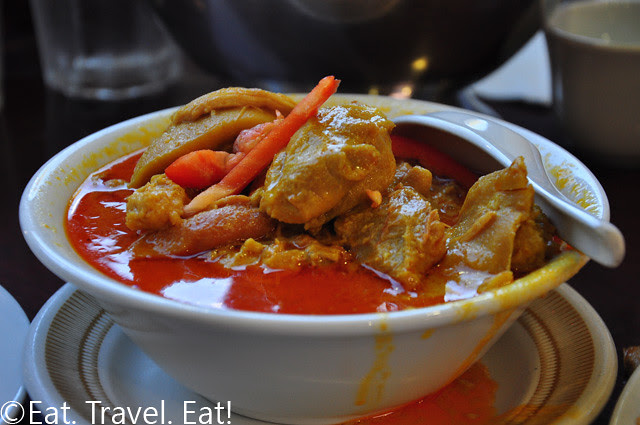 One of my dining companions ordered the Chicken Curry(8.45 USD), which was better. At first when the bowl of curry arrived, I immediately thought of the curry at Noodles (Bellagio)- Las Vegas, but this was better. The flavors were better in the curry with a light coconut tone and the meat tasted like the Chicken Capitan at Little Malaysia Restaurant- El Monte. And the rice was fragrant and fantastic! But, all that said: that puddle of oil, I want an explanation as to why it is even there... 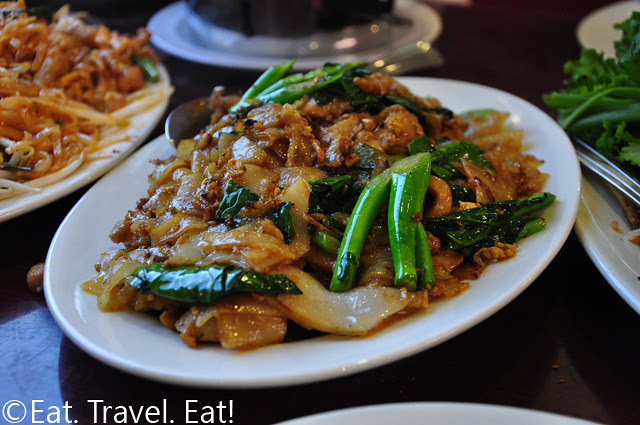 I decided to pick something from the Thai Nakorn Special side: Ride Noodle with Egg and Chinese Broccoli. This was quite tasty with some wok flavors and a slightly sweet soy sauce flavor, but it was yet again too oily. Just as oily Chang's Garden-Arcadia dishes, meaning a pool of oil. But only this time, I could see the oil and feel the oil in every bite. Or let me state it in another way: they used oil to the equivalent of how some chefs love, love butter. 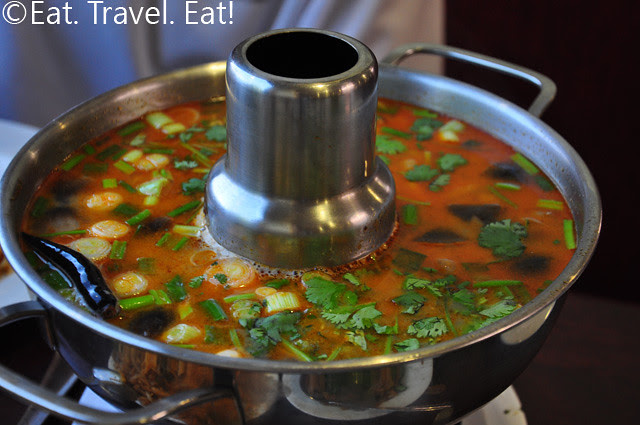 For a soup, we also had a pot of  Tom Yum Talay Tong (15.95 USD). This was quite good: the lemongrass, lime leaves, and galangal flavors were strong, and the soup was not too spicy as we requested. However, the seafood wasn't much in terms of quality to make it worth the pricetag: just fish fillets and some shrimp with the canned mushrooms. I'd order a bowl if you don't have a party larger than four unless you love to drink lots and lots of soup!

Anyway, the overall meal wasn't that great as I hoped it would be. Of course, I was wishing this to be a fantastic meal to put onto the excellent restaurants list! Plus so many people wrote positive feedback on this place! But sadly, the turn out was authentic but too oily and roughly executed. One dining companion even commented Thai Ritz Cuisine-Irvine had better food...shocking. The others commented that it was like my first experience with tortoise jelly- I really wanted to try it after my dining companion's comments but then when I actually got the chance to try it I felt it tasted awful. But now, I think it's tasty. And Hong Kong is definitely the place to eat it!  Hopefully Brodard is better, whenever I try it.

But what's this? It's the Marine Corps Air Station in Tustin. And the hanger you seen in the photo was enormous. There were two of them in fact. 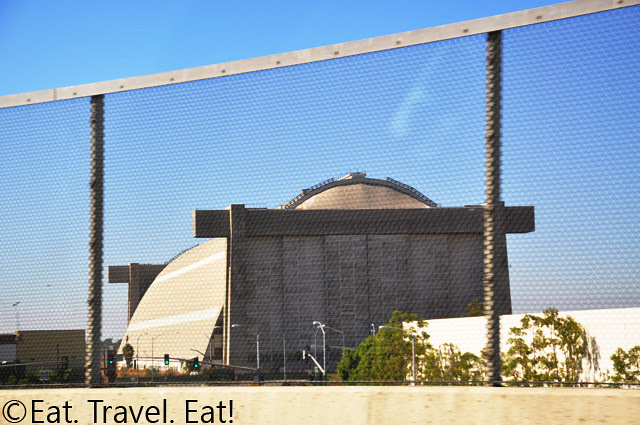 Now you have something to compare to in terms of the size, but this photo also has too many distractions. But I think you can get the point. Where were we going by this point? Back to Diamond Jamboree, where there was plenty of things to look at. The 85C Bakery line was two times longer than last year, meaning in that the lines went all the way to the other side of Diamond Jamboree near Lollicup and the back wall. We also got some food at Capital's to-go section which looked fine and very similar to Arcadia's version, and visited H-Mart yet again.

Then it was back to UC Irvine. In contrast to the drive from UCI to Thai Nakorn, this was short. But instead of wanting for food when we were driving to Thai Nakorn, going back to UC Irvine I wanted water. And lots of it! At least I got another attempt at taking a picture of the UC Irvine sign by the time we went home. However, the lighting shaded the logo unlike how it was during the morning....good lighting but the shutter speed was set too slowly. There's always next time!

And a short blurb as to dinner: Dean Sin World Xiao Long Bao's are very good abeit with a thicker top but with plenty of juice. 14 dollars for 50! And only 10 dollars for 50 regular dumplings! Fantastic deal. And these tasted just like tons of other restaurants Xiao Long Bao! Good for lunch, dinner, office, school, anything really. I've already brought them for school lunches.

And do not forget to leave a comment on my giveaway page so you can have a chance to win a 65 dollar gift certificate to CSN Stores! Offer open to U.S. and Canada residents. Full details HERE.

And a question: Do you want restaurant reviews on so-so restaurants? Or do you just want the good or interesting places that I've gone to?

elmomonster said…
Great review! Pity it wasn't up to your expectations and perhaps it's time for me to go back and see if things have changed the last time we went.

I'm not as sensitive to grease, so perhaps I need to pay more attention to this the next time.

And it reminds me that I've actually never tried the pad thai at Thai Nakorn (I must have ordered it when they were in Buena Park) but that was more than twenty years ago when I was a kid.

Those blimp hangers are enormous! Did you know that it is one of the largest wooden structures in the world. It was featured on History Channel's Modern Marvels (or some show like that)
October 11, 2010

EatTravelEat said…
Elmomonster,
Thanks! I would have ordered more of the items you had but lots of them conflicted to what we just had...e.g. clam fest before the day we came here, so no chili clams! I found it really awkward at how there were so little people in contrast to how many staff there were.

The oily part came mostly on the noodles, but that was to the part of you could feel or see the oil if you scraped the noodle near the bowl. Not in like a light streak but a substantial amount. It went fine with rice though!