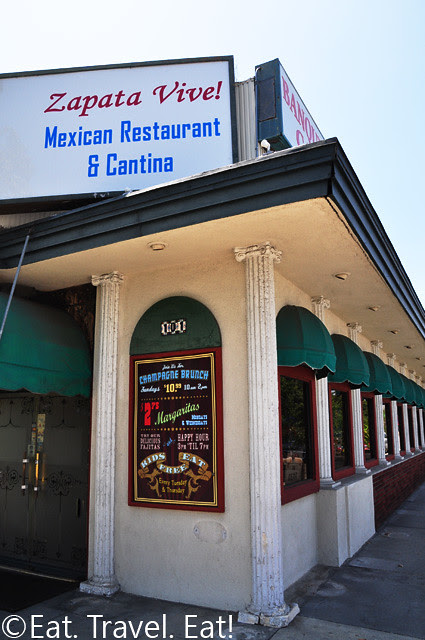 The comments from last week's survey requested unanimously for a Mexican restaurant in Arcadia, and so here it is! Zapata Vive is one of the Mexican restaurants in Arcadia where the atmosphere is decidedly more Mexican compared to other places as well as sunny. And if you can't tell already by my writing, I have been here quite a few times. (However, this post only has photos from one visit and that is the first time I brought my camera to this place)

Additional plus? There are routinely coupons for Zapata Vive in the local mail, and there are also restaurant.com gift certificates available. Thus, if you have extra airline miles from United that you don't plan on using for flying, switching for gift certificates is a great option- and using it here is a good option, as the main condition is 35 dollars minimum on food only, which when you have a party of four is easy peas-y. Plus you can use it any day of the week and any time of day, including lunch. 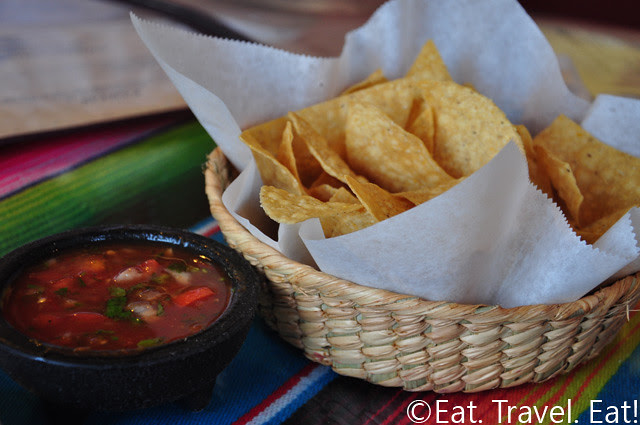 I do not have any interior photos since there were plenty of people relaxing in the restaurant doing work on their computers, enjoying drinks, and watching a Dubai air show competition which was on the flat screen TV's nearby the bar; might as well not disturb them with some click-clicks pointed towards them. But this tablecloth should tell you something about the decor!

Anyway, any meal at Zapata Vive starts with some chips and salsa. The tortilla chips were freshly fried and warm with a crisp, and the salsa was quite spicy with bits of tomato, onions, and pepper. However, the waitress said it was the mildest of the salsas they had; but how about pico de gallo? Maybe she didn't include it as it is different in a sense...anyway, salsa= sauce if you didn't know. Some basic Spanish knowledge. :) 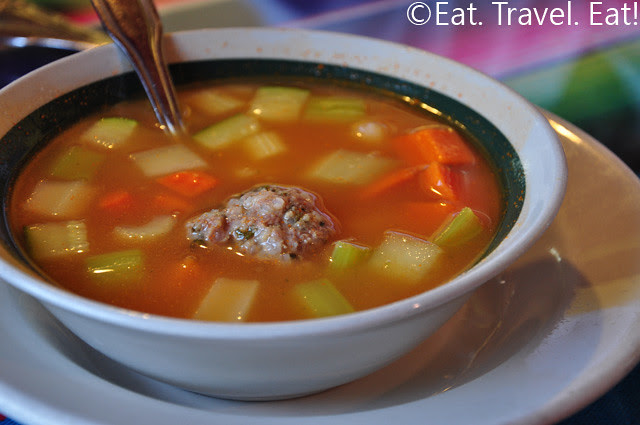 One of my dining companions decided to order the Albondigas soup as an accompaniment to the entree, and it arrived first ($2.25 add to entree, otherwise 5.50 USD). This was quite nice, light and healthy. There were big chunks of zucchini, celery, and carrot in a light meat broth. The meatballs were herby and meaty and a bit on the saltier side. We enjoyed the vegetables and soup broth more, but still it was very good and an excellent deal for an addition! 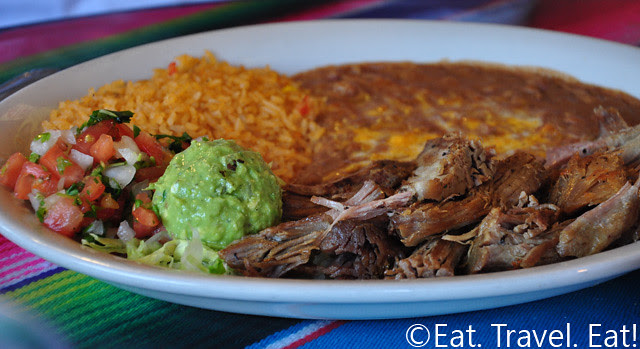 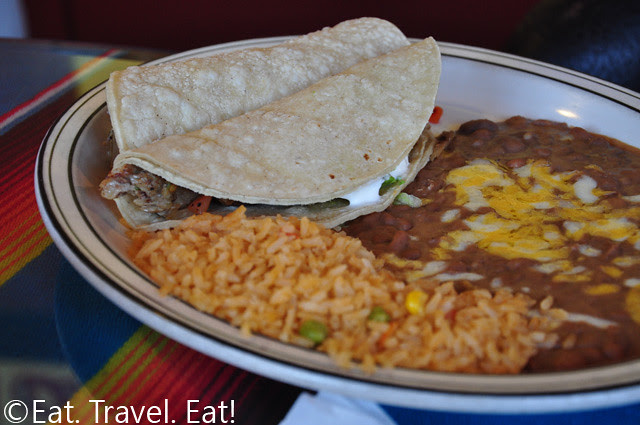 It so happened to be that two of my dining companions ordered carnitas dishes. The Carnitas with tortillas, pico de gallo and guacamole (1st dish) was 10.99 USD, while the two soft tacos version was 9.99 USD. Both were so-so, but usually we order other things that are better. The main reason was that the carnitas were dry, and needed something for moisture. As you can see, all entrees were served with beans with cheese broiled on top as well as some Mexican rice. Personally if I was ordering I would just order the 10.99 version from the specialty section and not the tacos version, since you get some more guacamole and pico de gallo and additionally get to make your own tacos as you want them to be. 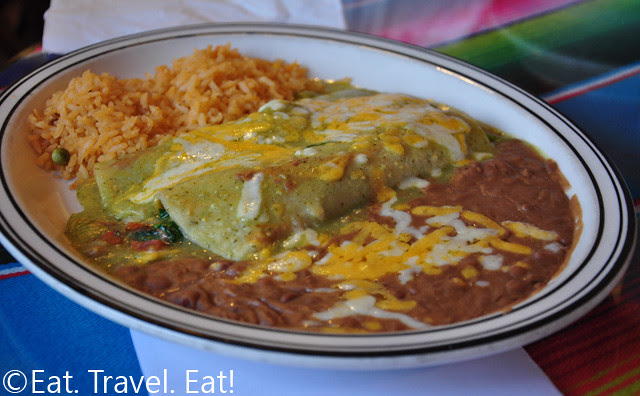 My other dining companion ordered the spinach enchiladas, which was only listed on the dining menu and not the take out one. Of course, we were allowed the choice of red or green sauce, which we replied to as green. Speaking of which, there is a story behind this.

Around the end of the school year last May or so, my Spanish class brought in Mexican food almost everyday for one special week, and thus I sampled lots of different foods. One of the most spectacular ones was enchiladas verdes filled with chicken and some onion. The enchiladas had been freshly brought into class and thus were piping hot, and the green sauce was light and slightly peppery, providing a nice backdrop to the rest of the dish. It was so good, I envisioned ordering enchiladas in multiple restaurants to see what could compare...one of which was the Cheesecake Factory (post on that later). But since the Cheesecake Factory version used a red sauce, the comparison wasn't really great. So...

...how did Zapata Vive fare with this? Well, obviously this was a healthier take, with spinach and some other vegetables being the filling. The filling wrapped in a corn tortilla was then dipped in a creamy green sauce, and then broiled with some cheese. Overall, very good. But it wasn't my serving, although I was going to order an enchiladas plate (but decided not to for some more variety for this post). What did I order? 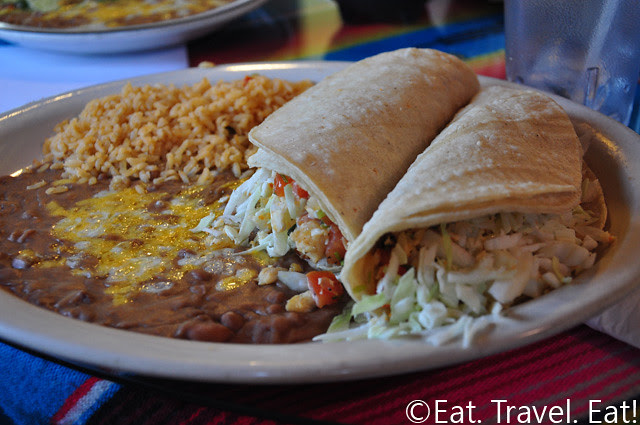 I had two fish tacos (9.99 USD).  The first time I ordered this dish, I was shocked that the fish pieces were not fried but almost flaked instead. However, I have come to realize that fried fish tacos are Ensenada-style, and there are other preparation styles for one dish.What was nice about this version was that the cabbage is not bitter at all, and that there was plenty of crema for a nice binding as well as some sweetness as well as some pico de gallo for some pop. The fish was tender and nicely seasoned, and the corn tortillas (supposedly handmade) were not dry and finished well with the rest of the taco. Very nicely done! Estos tacos de pescados son muy sabrosos. Plus the beans and rice went well in between bites of the taco and were not bland at all. Yes, these were better than Los Guero's version, although the fish here was flaked. I said so last year, and I still believe so. Unless you readers would like to pitch in on some other places that are not too far away that serve some tasty fish tacos (and enchiladas while you are at it)!

Overall, we enjoyed our meal at Zapata Vive. It was relaxing and the environment made it feel like we were in Mexico again! The restaurant.com discount cut the bill significantly, but you can save even more money by visiting during lunch in the weekdays for their Lunch Fantastico where dishes like the fish tacos are discounted to a very reasonable 5.99 USD. Really, it is a fantastic deal. El almuerzo fantastico es muy barato y es una ganga buena. (or in other words, very cheap and a good bargain)

Another Mexican restaurant I like here in Arcadia is Pacos, but the thing I don't like is the dark atmosphere. Otherwise the food compares to Zapata Vive, but I prefer Zapata Vive for the brightness!