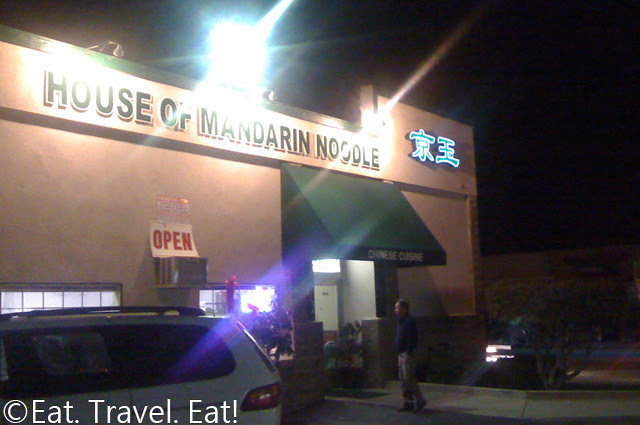 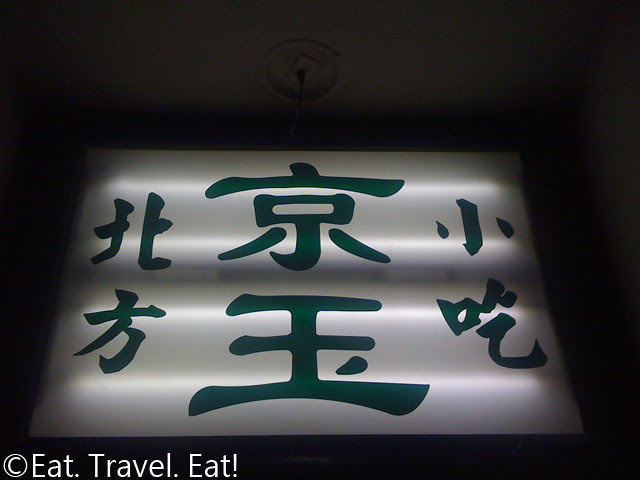 Anyway, unlike the previous location which was located on the busy Las Tunas Drive, the current location is farther south, in/close to a residential area, but still on Temple City Boulevard. For some, this might feel slightly unsafe- there is less traffic and less lighting around this area. It is definitely farther for those above or east of Temple City, but for those living in Alhambra and El Monte House of Mandarin Noodle is now closer to you. We at first thought this location would bring less customers- it certainly seemed like so when we were coming in. But by the end of the meal, the restaurant was full to to point that there was a big queue. Thankfully, parking here is more copious and closer to the restaurant, but the layout is also a bit dangerous with less than ample lighting in the parking lot. 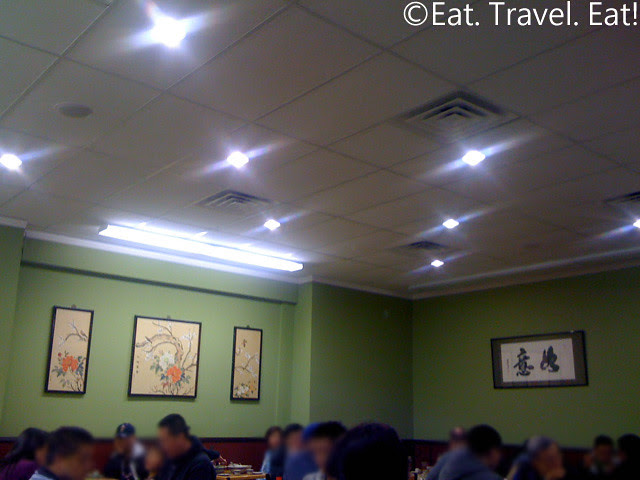 Inside, the colors were similar to Mandarin Noodle Deli in the past- green walls and the similar melamine plates and green/black chopsticks. The tables however did not look as pretty as the ones before; probably they were handed from the past owner of the place, just like how New Mandarin Noodle Deli took Mandarin Noodle Deli's equipment. There is now even a steam tray, but the manager has not used it yet. Probably it might store cold dishes later. 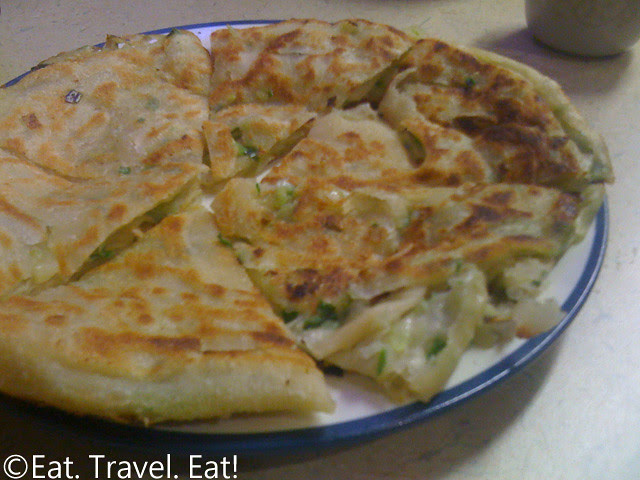 I was not planning to even write about this meal as I did not bring my D-SLR with me, but when I saw this pretty plate of Green Onion Pancakes I could not resist. So, yes I did skip some photos of some other items we had, one of which was a Cucumber and Seaweed combination (you have to ask for a split of both) which I have pictures from the previous restaurant from. The serving size was about the same here, but the marinating liquid was a bit sweeter, with less vinegar and garlic/ginger. So, to balance the sweetness, we added some vinegar and all was as good as before.
Then came a serving of Green Onion Pancakes, but not the one above. The first serving had two pancakes (we had ordered two), but what happened? One was cooked too long, had less layers than before, looked fluffy, and was quite charred, while the other one was like before. The taste was still about the same, with a fragrant green onion flavor. However, the manager probably somehow heard our comments (we were sitting far away though), and knowing that we were returning customers, she asked her waitress to send over another plate of Green Onion Pancakes to our table. So, as an explanation, the waitress said, "The manager said that she knew the last plate of Green Onion Pancakes was not cooked very well, so thus she told the kitchen to make a better one for you."
And better it certainly was! There were tons of layers, tons of green onion, and the exterior was pan fried to a golden brown, not black. Simply delicious. This plate was definitely an improvement compared to the past Green Onion Pancakes we have had at her restaurants. 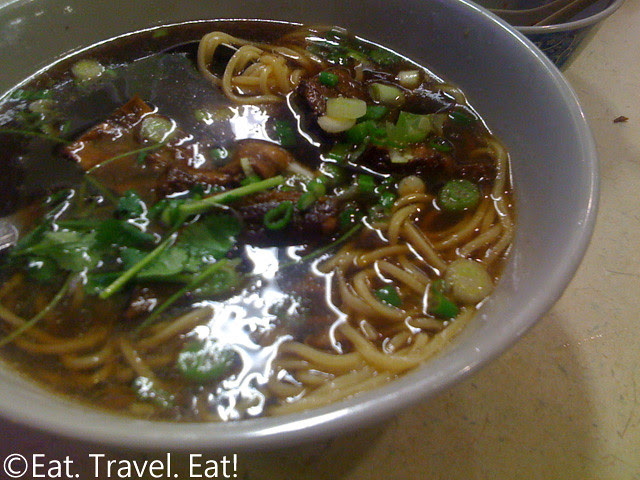 It took quite a while for our Beef Noodle Soup we ordered to come. You see, with their new location located closer to the residential neighborhood, their take out business has only grown larger; we heard more phone calls than ever before, and people living from the nearby area were also visiting the area. In addition, the waitresses were still becoming used to a new routine and the layout of the restaurants, so items did come slowly.
Luckily, the wait was worth it, as this bowl of Beef Noodle Soup was better than ever. The noodles were similar to before, but this time they were cooked so that they were still very bouncy and chewy (aka very "Q"), while the soup was concentrated in beefy flavor. Scrumptious, it certainly was! 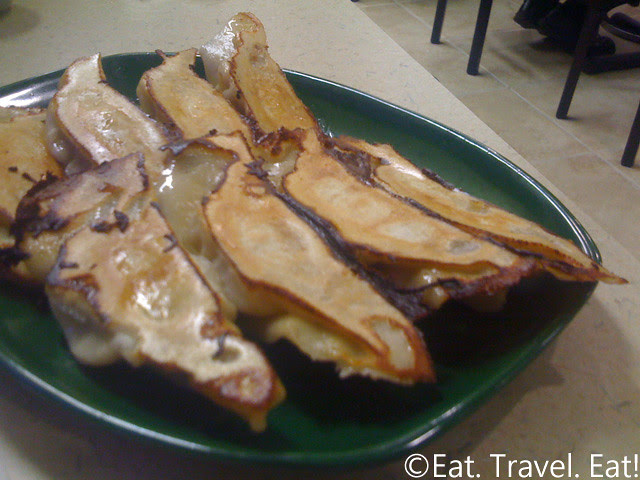 We also ordered a plate of pan fried dumplings, which also had improved from the past. These still had the special meat flavors that I've only seen come from the the manager's restaurants, but this time the flavor was more savory and flavorful compared to before. The crust was crisp and filled with flavor; there was not much need for vinegar here, only to cut out the meatiness. 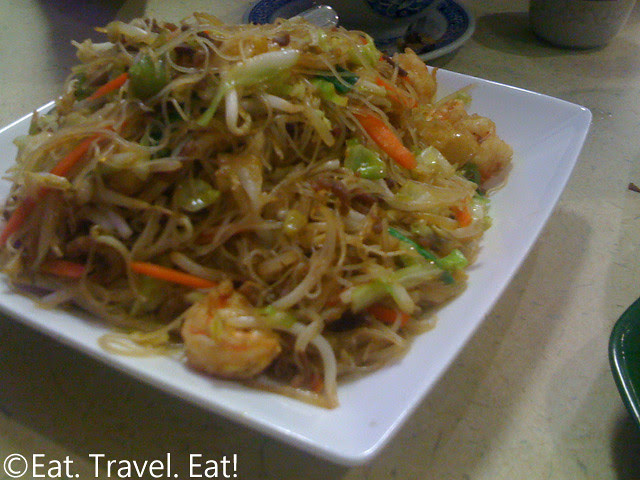 Lastly, we also ordered a plate of stir fried rice noodles to try. Compared to the old restaurant, this had changed slightly- now there was more meat and veggie, and less noodles. In addition to pork strips, there were shrimps and chicken in the noodles too! The flavor and the noodles were still the same though here, still flavored with the same soy sauce/veggie/meat broth flavors and still bouncy and light.

foodbin said…
nice plate of rice noodle-would the pancake taste better if they have added egg to it.
January 19, 2011

EatTravelEat said…
Protocol Snow,
It will be great for you when you have time to visit again! :)

Foodbin,
I think it would taste better as well as be quite interesting, although the pancake is on the thicker side for such an application in my opinion. They do offer it with beef and green onions rolled up together though which works!
January 25, 2011

seatvacations said…
that stir fried rice noodles looks like a Pad Thai in picture..lucky you to have a very nice tasting experience.. :)
January 27, 2011

EatTravelEat said…
seatvacations,
Thanks! Those rice noodles do not taste anything close to pad thai though. :) Completely different cuisine.
February 02, 2011

Anonymous said…
I never understood the attraction of "Mandarin Noodle Deli", so now that they've moved even further away (to me at least), is there any reason to go beyond the NRM? Are still still not pulling their own noodles?
March 04, 2011

Personally I like the broth better than other places; comparing to other places the broth has a heat that isn't in your face but rather is like a subdued heat that grows as you enjoy more. In addition the broth is more beefy in flavor. The knife cut noodles I think are handmade (possibly) but to me they are usually too chewy. It's simply ones preference on that matter.

The reason why I go other than the beef noodle soup would be the green onion pancake, it is really quite a homestyle version and has lots of layers while other being tender and fragrant with onion flavor.

Anonymous said…
Can anyone recommend a website that has EXCELLENT recipes comparable to these foods? I don't live in the area but i wish i did. I can't enjoy these restaurants, but maybe if i had a recipe I could try to mimic the experience...
July 13, 2011

There are plenty of websites out there with recipes for these types of dishes, but most will probably taste slightly if not quite different compared to this restaurant's food. Try a google search, and don't mind experimenting; it might take several tries to achieve the taste that you like.
July 13, 2011