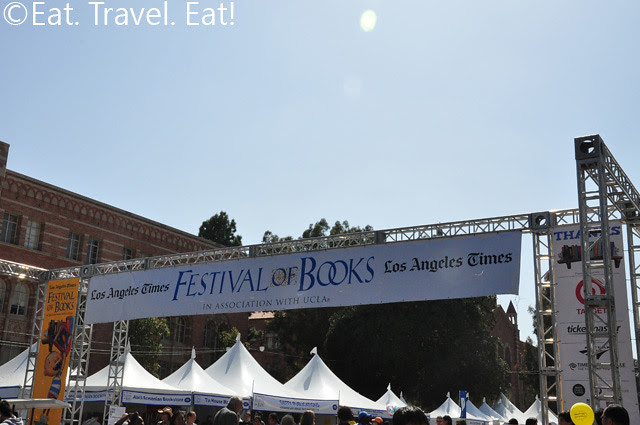 Around April, my companions and I decided to go to the Los Angeles Times Festival of Books﻿ event at UCLA in Westwood. Why now? Just a early hint for you to go in April 30 - May 1 this year. Like my usual pushing back of posts, these photos are also more than six months old. However, unlike last year, this year's Festival of Books will be at University of Southern California (USC). The irony! But the apparent reason is that USC will allow more room for the Festival to grow and it will be a nice change in pace. For me, well I do not mind as much, although I know plenty of people who are biased on either side. I'll just be able to see another university if I go to this year's edition! 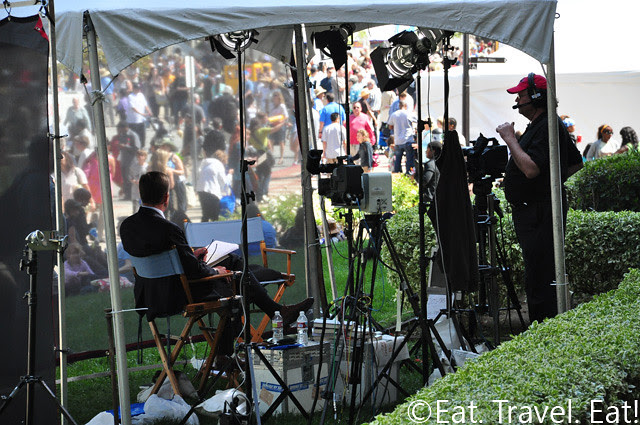 P﻿arking did take quite a while during the afternoon and it was not free (I think 10 USD or so), but signs to various parking structures were labeled clearly and thus they were easy to find. Not all were in very close proximity- you still had to walk some. I suggest if you want to take the most advantage to come early in the morning or if you are a local, you can find some bus programs that will drive to the festival. This way you can see more and do more at the Festival.

Anyway, after parking, we found out it was quite breezy for the day, and walked pass a section of fountains and pretty gardens with sculptures before we actually arrived at the Festival areas. There was already plenty of book signings and presentations going on as well as lots of book selling. This person in the photo looked like he was about to shoot some news broadcast. Isn't the setup quite complicated? It does bring better lighting to the scene. 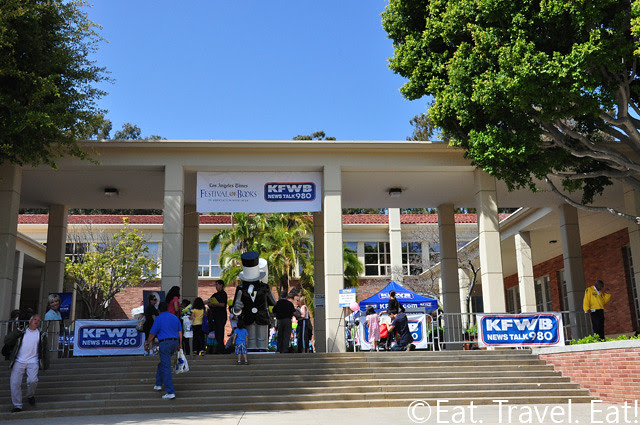 We walked around areas, where there was plenty of selling and talking going on. Kids played around and took pictures with various characters from books while some adults and children decided to read under the shade. It may seem unusual in today's society of constant cellphone usage and internet communications, but it certainly was not as surprising ten years ago! Oh what change.
Then we found the KFWB section (AM 980) where they were broadcasting directly at UCLA. In addition to that, there were also drawings involving spinning a wheel! My companions and I won some books (for those with children, yes you can also get some picture stories in addition to the other books) and some bookmarks! Which is also another great thing with the Festival- you can get lots of freebies. There were tons of pens, pencils, bags, fans, and other things to grab at the festival. Hey, even food samples were given out by companies!

We then passed by the KTLA section- where you could meet the show hosts if you wished. That's where the first photo of the post was taken. Nearby we found the UCLA book store booth and some other UCLA booths where there were even more freebies- one of which was a UCLA reusable shopping tote. A very useful freebie! On a side note, I passed by a UCLA store in Guangzhou while on a taxi ride...so as you can see, people like university stuff. I sure do. 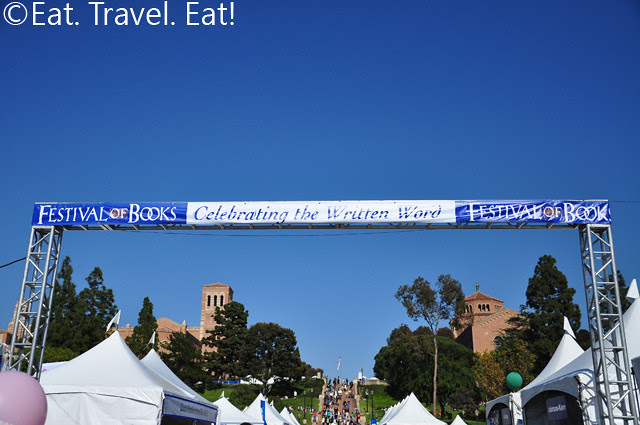 We randomly meandered throughout more parts of the festival, where Target had a section and later on where kettle corn and the UCLA bookstore were. Kettle corn is a nice thing to get at festivals; I remember the first time I came to the Festival I bought one and it was certainly a nice memory. Now prices have gone up!

In addition we also passed by Bora Bora Food's booth, where they handed out free bars! A nice gesture at that, since all of their bars cost quite a bit of money. I enjoyed a volcanic chocolate and banana bar while walking along- it certainly tasted like what the ingredients listed- walnuts, chocolate, and banana definitely stood out among the crunch of other ingredients like rice crispies. Definitely tasty! 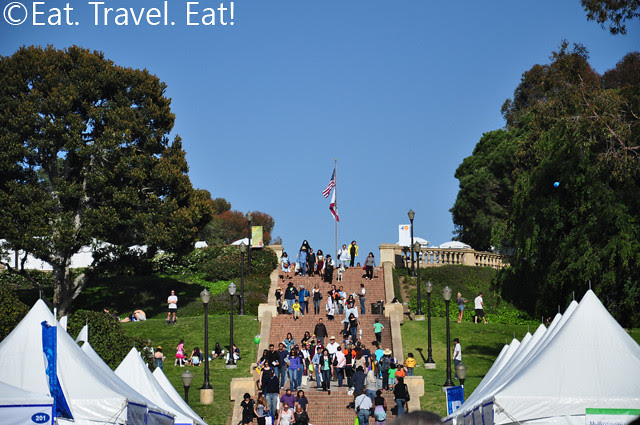 And randomly walking we found ourselves in the process of walking a giant circle, as this flag pointed in the direction back to where we had started. However, where we were at had some fun things. One of which was food- cookbooks and real food. 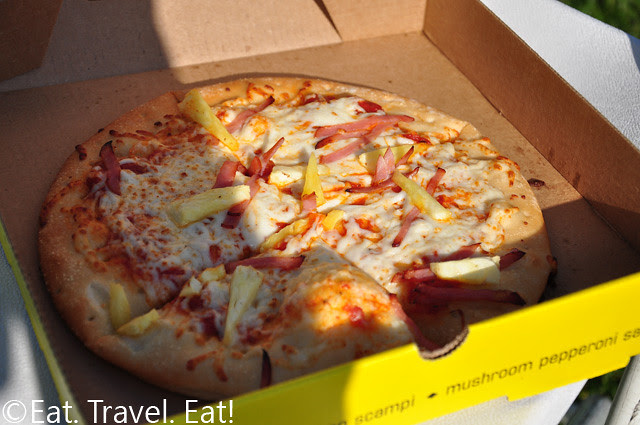 Since it was already so late when we had arrived to this section as well as UCLA in general, some of the shops were closing for the day- food especially. So, in order to attract customers, one outlet- California Pizza Kitchen- decided to make everything on their menu 50 percent off! So, this pizza suddenly became from a overpriced 10 USD pizza to a much more reasonable 5 USD pizza. I wanted to get a Barbeque Chicken Pizza but they were out, so we settled for Hawaiian.
The size of the pizza was similar to the kids size pizzas (personal size) , maybe slightly larger. The dough was the standard slightly sweet and soft with hearty crust that CPK does, while the tomato sauce was a bit lacking in my opinion. There were plenty of pineapple and canadian bacon for some flavor though and the cheese was nice and stretchy. Had it had more tomato sauce I would have liked it much more; it just seemed a bit dry eating everything. 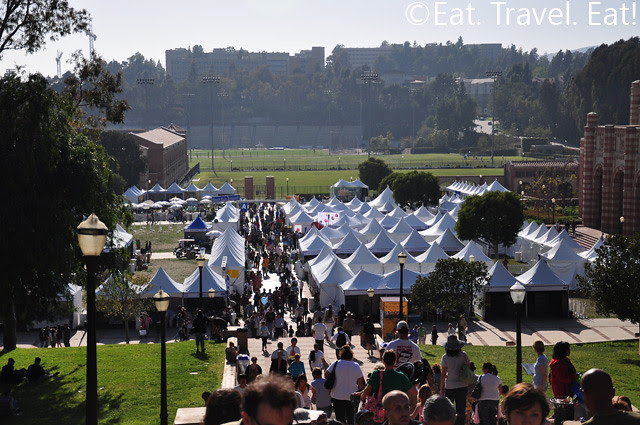 Since we had bought plenty of pizzas to take home, we decided to walk up the stairs and drive back home. Walking up the stairs bears some resemblance to the point that you have to work hard to reach the top- these stairs were long, and alongside were plenty of trees where people sat down to read books and enjoy the view. Higher up, we also got a view of the booths and tents- this is only one area of many! 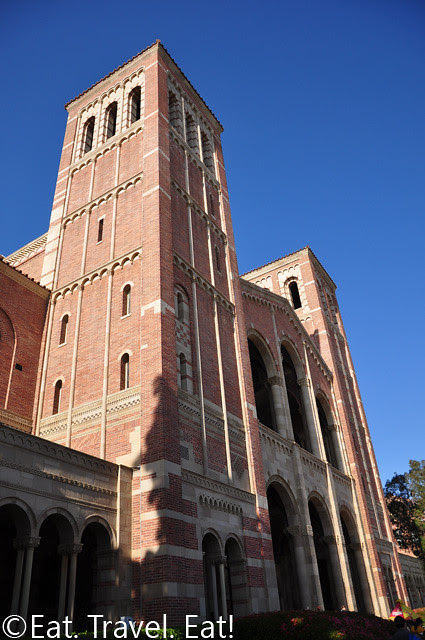 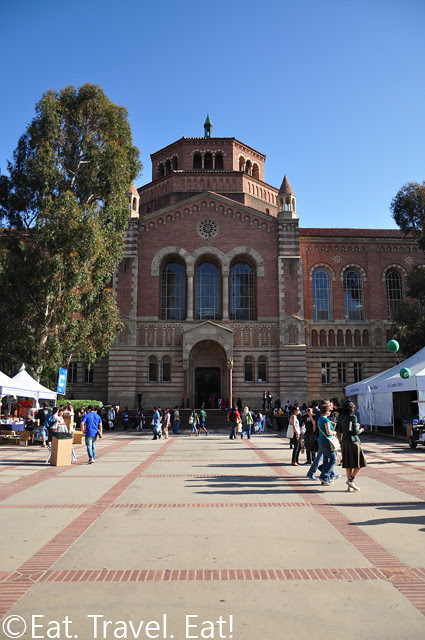 Upstairs and walking back there were some nice buildings to see. Anyone who is a UCLA expert can probably recognize the names of the buildings, I do not. I think the first one is Royce hall, the other one I am not sure. And do you see the blue square with a letter in the second picture? That is how you can differentiate between areas of the festival. 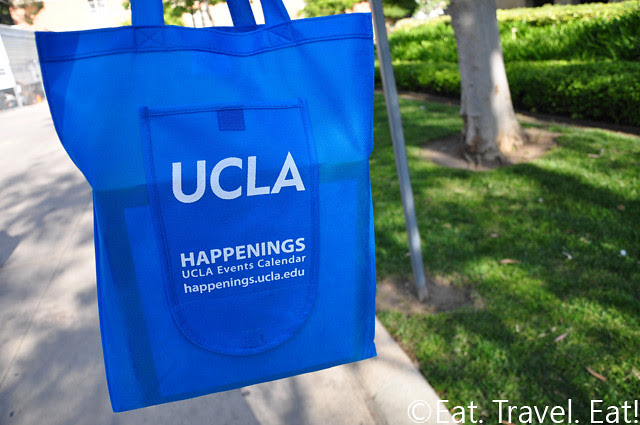 See the UCLA bag? Inside are some boxes of pizza. Yes, I played pizza delivery-man. 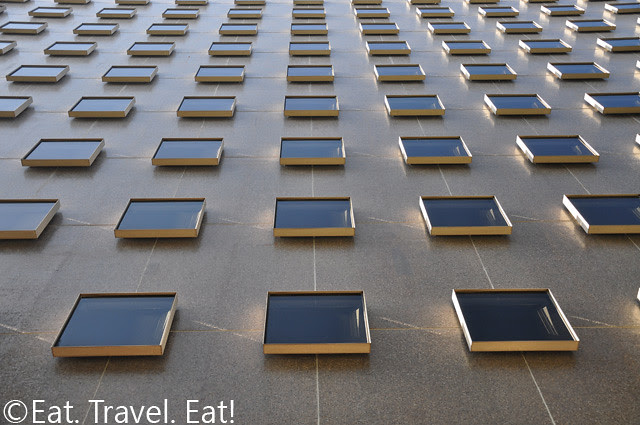 There was a nice sequence of windows to look at as we walked back towards the landscape with sculptures area- under this was the passageway to that section. 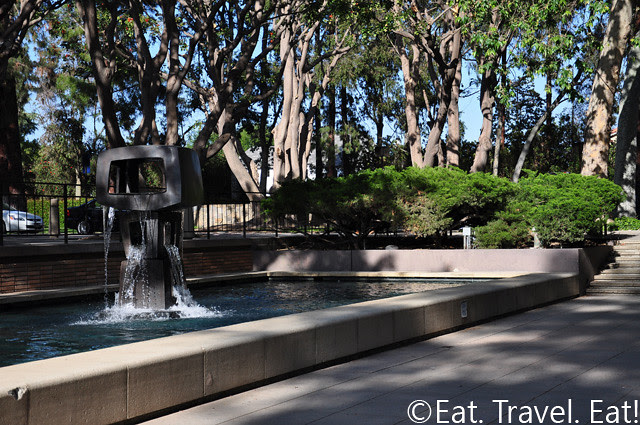 Back at the fountain and sculpture area, plenty of people were either taking pictures, relaxing, or going back to their cars. So I decided to take some pictures. With such a large area with area to move, you really can have multiple perspectives. So, picture one of the fountain. Kind of boring, to me, but still pretty. 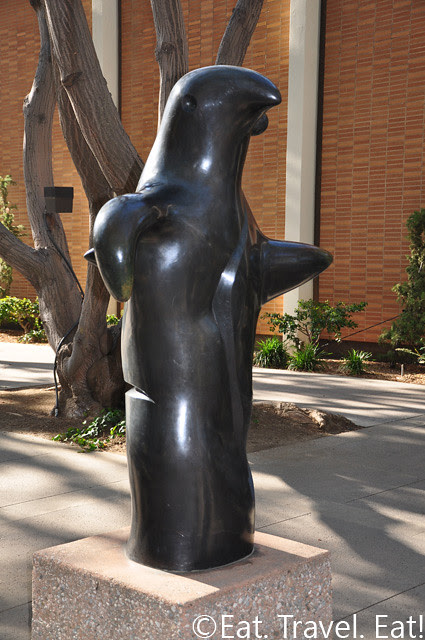 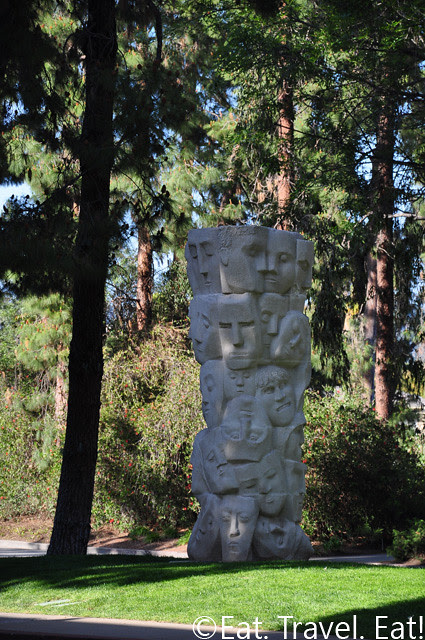 These were some of the sculptures nearby. Very artistic and interesting! 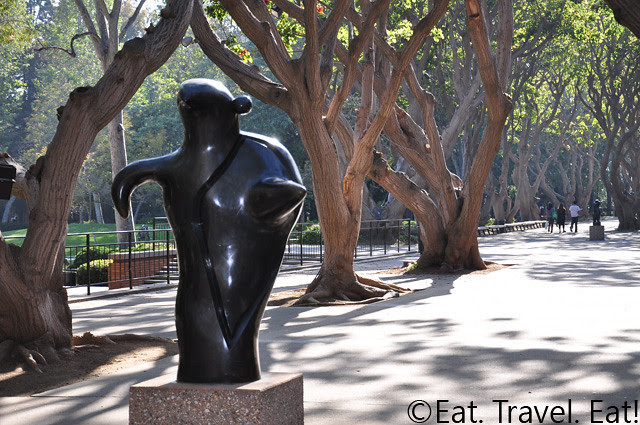 A slightly different view and composition of the same sculpture as shown in one of the earlier photos brings a very different feeling. The description for the sculpture reads: "Mere Ubu, 1975 Joan Miro, Spanish 1893-1983 Gift of the UCLA Art Council in Honor of the Thieves Market Volunteers." 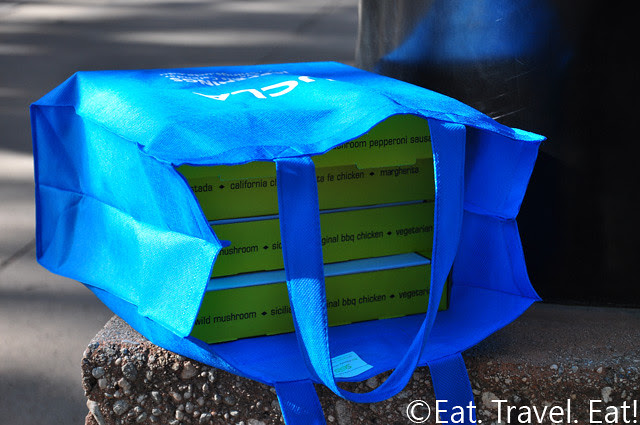 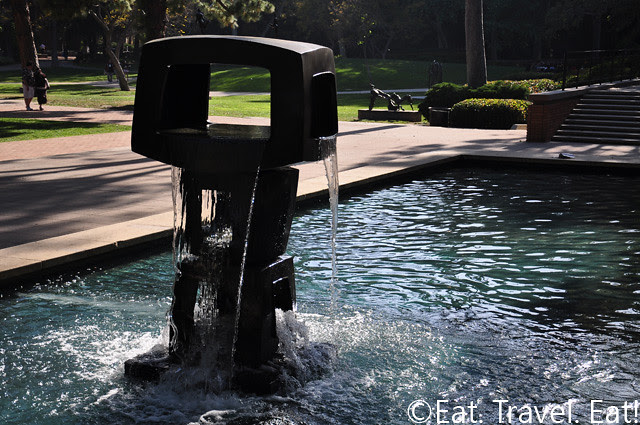 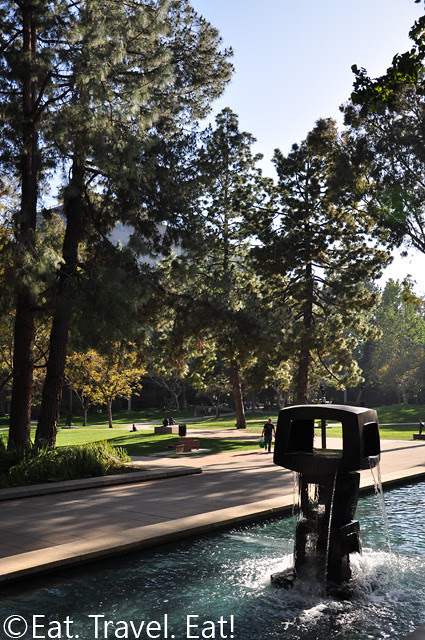 The pretty fountain with the large, graceful trees with plentiful shade makes for a great place to relax or study. And this last picture of the fountain is probably my favorite out of the many pictures I took of the fountain. It was a nice closing moment to pass by as we hopped back onto the car and drove home in some nice traffic!

Overall it was a fun festival- lots of events going on with plenty of promotion on books (discounts too!) and other products as well. For those prospective applicants, going to such a festival like this is great as you kill two birds in one stone- you can visit the festival and say, "I went there!" and also say that you have been to UCLA. Now it will be you have been to USC, if you go on April 30-May 1 for this year's festival. If you haven't been, I definitely recommend that you visit this year's festival! :) Great for international visitors or locals alike.

Midnyt Blaze said…
Festival of books is a great practice of knowledge. That will inspire to read children and to think out of the box.