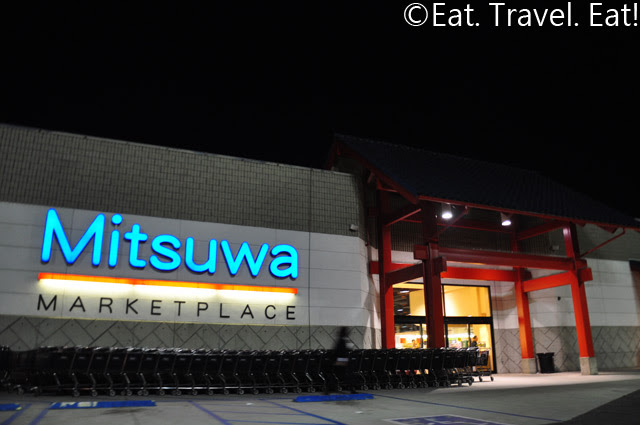 We were shopping around one day at Costa Mesa's South Coast Plaza and Metro Pointe and wanted to eat somewhere. However, Metro Pointe had barely interesting to us, and so my Irvine friend recommended us to visit Mitsuwa Marketplace's food court for a meal. No, it was no Charlie Palmer, but I had heard quite a lot of positive comments on Mitsuwa's food courts, so along we went. 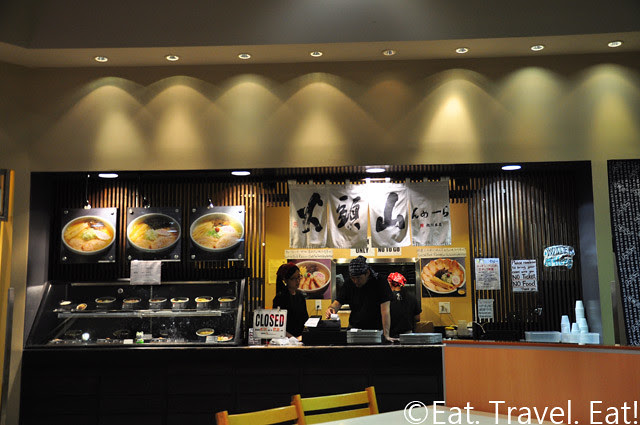 (Santouka- with food displays and water/seasonings to the side)
This was certainly the largest Mitsuwa I had ever seen- there was a food court section, a full market, and a smaller area with lots of small vendors selling various foods (like mochi and cookies) as well as other items. At the food court, there were also plenty of options- traditional Japanese food was served by three vendors, there was one vendor selling Chinese food, and lastly Italian Tomato who sold cakes and desserts.
Although we were enticed with all these options, we stuck to what we knew. I remembered reading about Santouka Ramen on Edwin Goei's Monster Munching as well as Eileen's Eileen Likes to Eat, so I went to queue in that line. 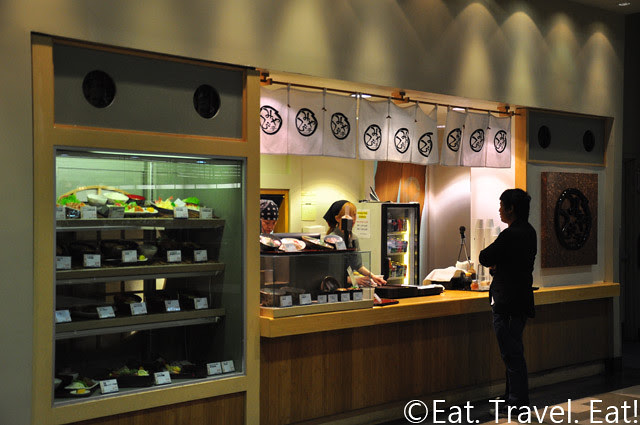 My Irvine friend went with Miyabi-Tei, as he had previously eaten there and liked the food; he stated that it was tasty while also being a bargain. It looked like as if Miyabi-Tei was operated by a family- does anyone know? 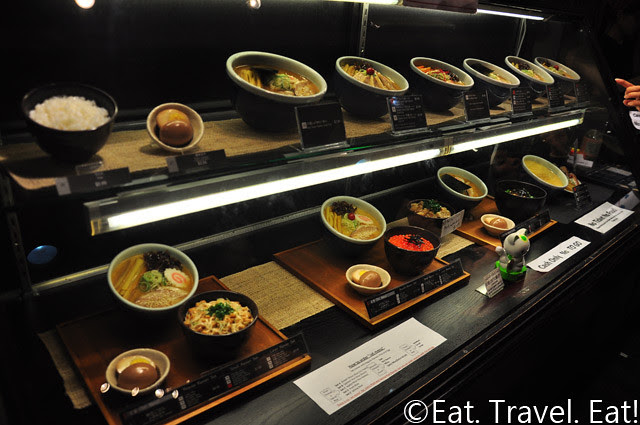 To help with deciding what item to choose, all the vendors had showcases of their food- sometimes fake (Chinese Vendor + Traditional Japanese Outlets), sometimes real (Chinese Vendor and Italian Tomato). Santouka Ramen had a fake food display with all of their various items and possible combinations. 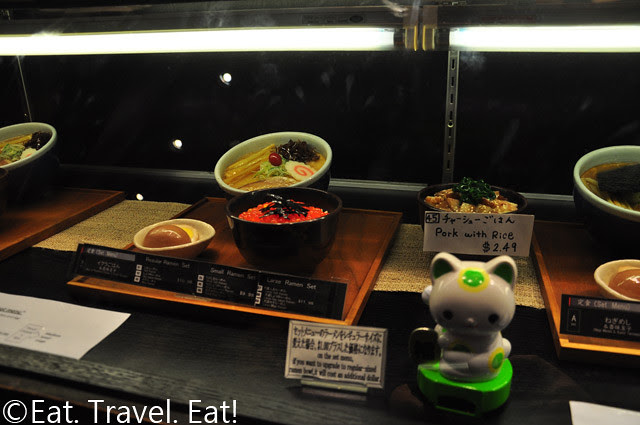 I decided on set B. All this deciding didn't matter however, as when I reached the cashier they had one paper with a simple grid describing their items and what I could pick in a combo. Deciding what item to pick was made even easier! By the way, do you like the fortune cat in this picture? They were quite popular several years ago- now they have moved onto different designs. These actually move back and forth using the energy from solar panels. 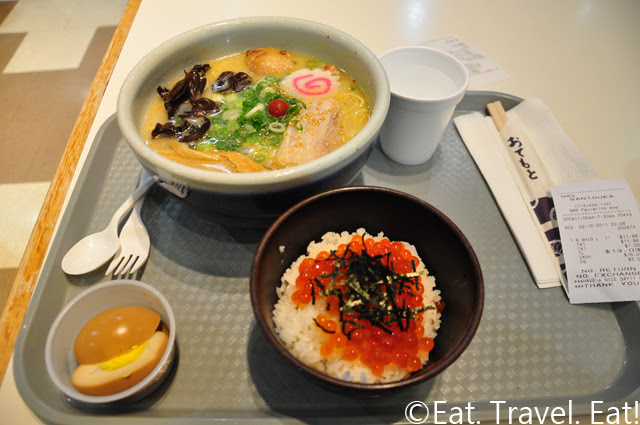 You just saw the fake food- now here is the real food! Although we were eating at a food court, this bowl of ramen certainly was at regular restaurant prices- 11.99 USD for a size large of shio ramen coupled with a bowl of salmon roe on rice. 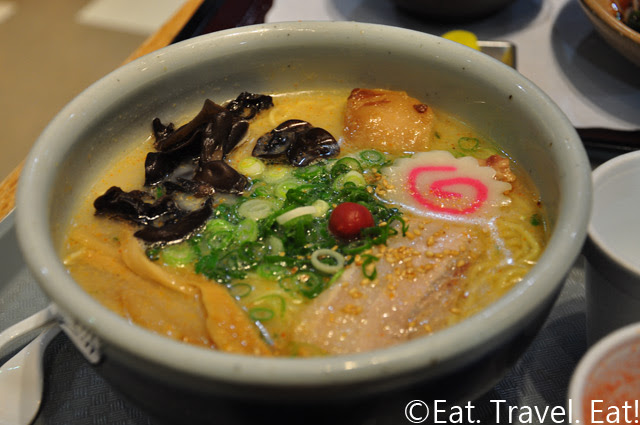 The shio ramen was quite large and was served in a ceramic bowl- a nice touch. Inside the bowl of ramen were tons of ramen noodles, several thick slices of pork, a slice of spiral shaped fish cake, bamboo shoots and black wood ear. To top it off, they placed some green onions, sesame seeds, and a small pickled plum.

What I liked most was the broth, which was not too fatty but still rich and full of pork flavor. The noodles on the other hand, were cooked to al dente with a pleasant chew- maybe too much for some, but definitely not as chewy as some Chinese knife cut noodles. The pork was also full of flavor, with alternating layers of pork meat and pork fat. Overall I enjoyed this bowl of noodles, but I rarely have eaten ramen in the past. This was definitely better than Ajisen Ramen though. 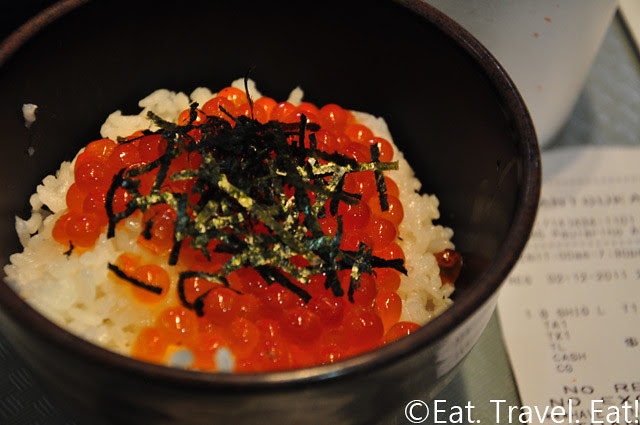 The salmon roe rice was just as pleasant, with a nice scoop of glistening, fatty rice topped with beautiful salmon roe. Alternating between this and the ramen was quite delightful- the ramen was savory with lots of rich pork flavor while this was lighter, with a taste of the sea. Sometimes the salmon roe oils would also transfer onto the rice since the roes could be easily popped- either way it was fun and tasty. 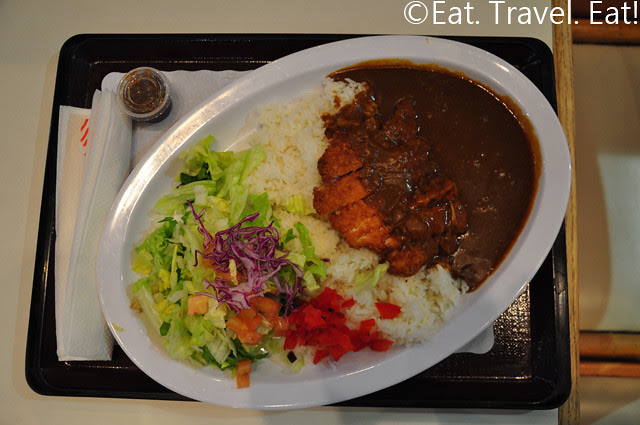 My Irvine friend ordered Miyabi-Tei's Chicken Cutlet Rice, as it was the dinner special that day. For less than six dollars before tax, this was such a fantastic deal- the plate was gigantic, but yet it was balanced meal with plenty of salad, lots of carbs with the mound of fat rice, and plenty of flavor and protein from the chicken. 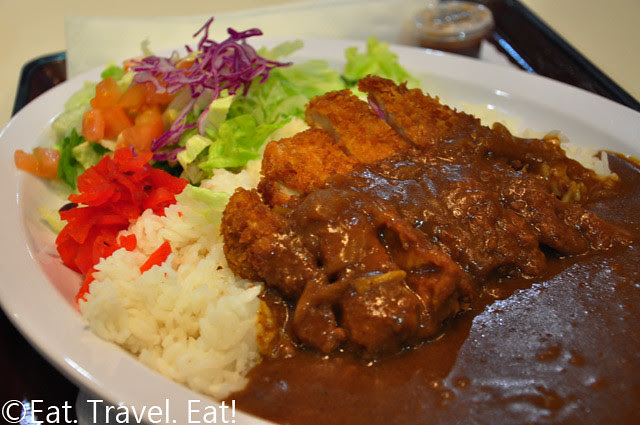 I tried a piece of the chicken cutlet and was quite amazed by the juiciness of the chicken; not only was it juicy, it was also tender and crisp on the outside too from the panko breading. The curry was great with the rice as it was thick, rich, and flavorful, simmered with some onions. Eating this made my friend quite full- after all, it was a very big plate! 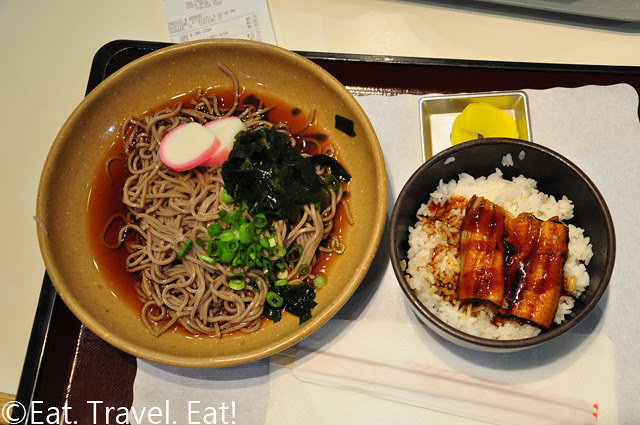 My other dining companion ordered a soba noodle and eel rice set at Miyabi-Tei. Like the Chicken Cutlet Rice, this serving was large and plentiful. 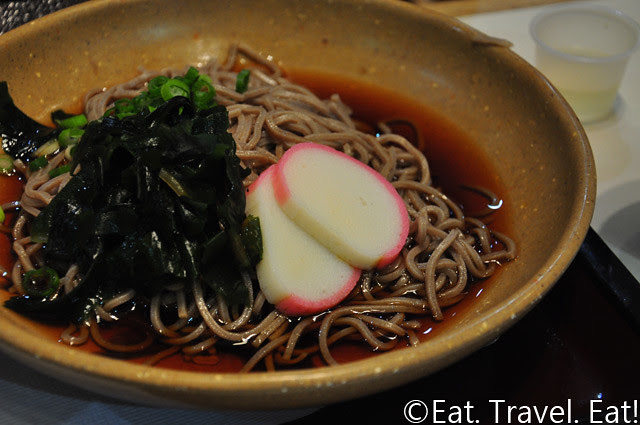 Glistening in a pool of soba soup base, the soba noodles were cooked just right in my opinion- bouncy with a light chew and seasoned just enough by the soup base. The wakame seaweed, green onion, and fishcake were also tasty side additions. 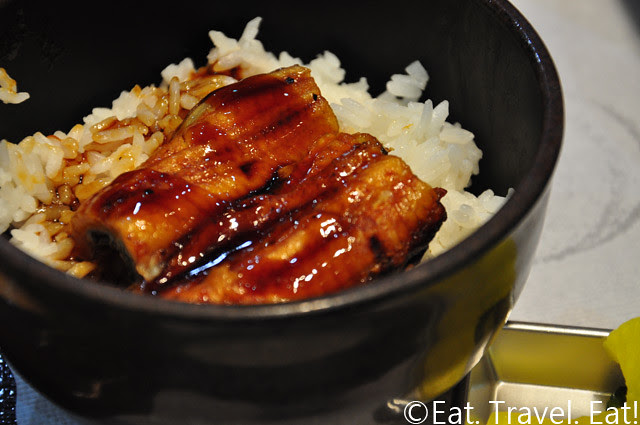 As for the eel rice, I did not try it, but it sure looked delicious! The eel looked as if it was freshly prepared and not the prepared eels with sauce that you can find in Asian supermarkets.

Overall, we all enjoyed our meals at Mitsuwa Marketplace. The environment was bright and pleasant, and we liked the fact that the food was freshly prepared and made with quality ingredients. It is certainly a great convenience to have all these fabulous different options all in one spot! Shopping for groceries and eating a freshly cooked meal at the same place is awesome. There should be more of these high quality food courts in markets or malls, or even universities even!

If you plan on visiting, take note that you should arrive by 7 PM at the latest. Most of the food outlets close around 7:30 or when food supplies run out! Right after my Irvine friend ordered his food at Miyabi-Tei, we heard from other people complaining that Miyabi-Tei was closed due to a lack of rice. Santouka closed later, with someone holding the sign as "I'm the last customer." And Italian Tomato closed right after that, with one employee slicing cakes for the next day. Also, you may want to bring your own utensils, as they just give small plastic utensils; especially for the ramen a bigger soup spoon would have further improved the experience. Plus, it is sanitary and saves the environment!

lynn said…
i love eating at mitsuwa! reminds me of sundays with my parents growing up.
February 20, 2011

Sue said…
I love Santouka! Their food display always confuses me until I get to the cash register haha. I love the shio ramen and and salmon roe rice combo, it's my favorite! Particularly b/c I absolutely love roe :) I've also tried Miyabi-Tei's soba and eel rice combo, but I didn't find them as tasty as Santouka's food...The eel rice was just okay, I wish they included more of the sauce but that's just me :P
February 20, 2011

KirkK said…
Hey ETE - Nexxt time try your ramen toroniku style - you'll get all the meats and garnishes on the side. And the pork for that version is braised fatty pork cheek.....
February 22, 2011

EatTravelEat said…
the actor's diet,
It was my first time and I really enjoyed it too!

Sue,
Yeah, the food display can be quite confusing! I liked the cutlet curry plates at Miyabi-Tei more than the soba noodles; both places serve quite different food! I liked Santouka that day more since it was cold- hot soup is great on cold days.

Kirk,
Aha! I saw some people ordering that too, I think some mention on "premium" pork was what it was. It will be interesting to see the differences between the pork!
February 22, 2011

Unknown said…
lols, being indonesian, i crack up every time i see the word "miyabi" hahahah
February 27, 2011

Marie said…
Ooh, I really gotta try Santouka! Japanese food is one of my favorites, so it makes no sense that I haven't tried it yet!
March 13, 2011

EatTravelEat said…
Mochachocolata Rita,
Words in different languages mean different things from what you are saying?

Marie,
You should definitely try it if you happen to be nearby one of their many locations in California! Some say the Orange County location isn't the best of all Santouka locations in SoCal.
March 31, 2011