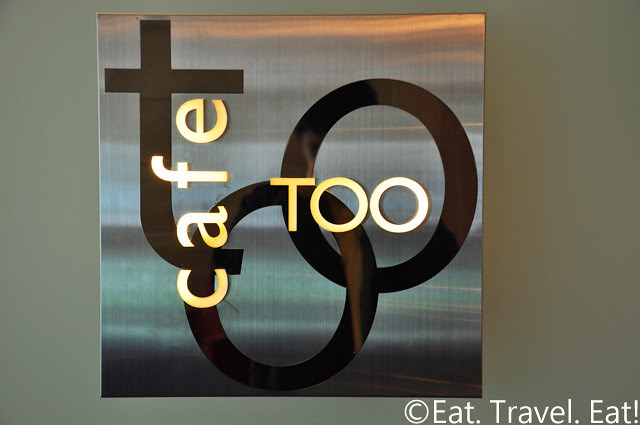 After settling in to our rooms from the long plane flight, breakfast was next in the list of things to do. So, we all headed down to cafe TOO, where the employees greeted us and walked us to our table, asking us our room numbers, number of guests, and if we wanted newspapers along the way. 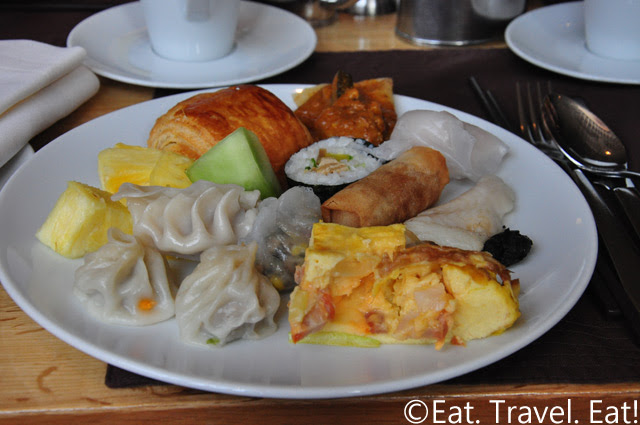 Walking around cafe TOO again for the first time in more than two years, I felt very impressed by the food display. It had seemed like a 14 hour flight had brought me into such a different environment- immediately the stress from the past few weeks before this trip seemed like it had disappeared.

I was also surprised by the amount of people in cafe TOO- lots of people happened to be staying in the Island Shangri-La compared to before for this vacation period. Families were having large get-togethers and reunions here and everyone seemed to be in a very happy mood. Of course along with the families were plenty of business travelers- lots of variety in terms of people in the restaurant.

As I ate my first plate of food I was quite impressed yet again....everything seemed to taste scrumptious! Of course the juicy pork dumplings (xiao long bao) were not juicy- I knew that would be so from past visits, but I was surprised this time that there was a teeny bit. All the flavors were there however. The other dumplings were all superb- high end dim sum quality with freshly made fillings cooked to just the right state and nicely made wrappers.

The fish and the "quiche" like egg were from the main sections- I primarily got them to have a sample of everything; the fish was nothing special (but good protein and fresh) while the "quiche" had a very tender egg mixture with plenty of ingredients including ham and onions dispersed throughout.

I balanced this plate out with some fresh fruit- melons and pineapples, while the chocolate croissant was a tasty pastry, with plenty of chocolate and buttery layers.

The other items on the plate were kimbap- decent but could be more flavorful as there were only egg omelet (sweet) and pickles, roti paratha (too oily) with some mild but flavorful indian curry, and a spring roll to test out more items. 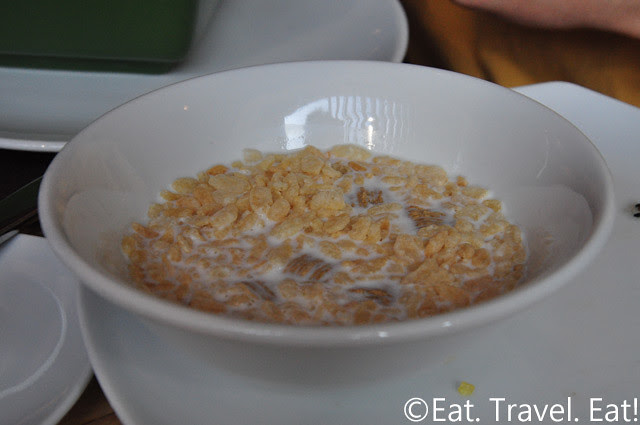 With all buffets, if I happen to see any rice crispies, I'll definitely get a bowl of them along with milk. Personally I don't eat rice crispies often at home- so to me they resemble vacation and travel. The fresh, creamy tasting milk was great along with the rice crispies which popped in my mouth as I enjoyed each spoonful; there was also some shredded wheat cereal which I included for some more variety. 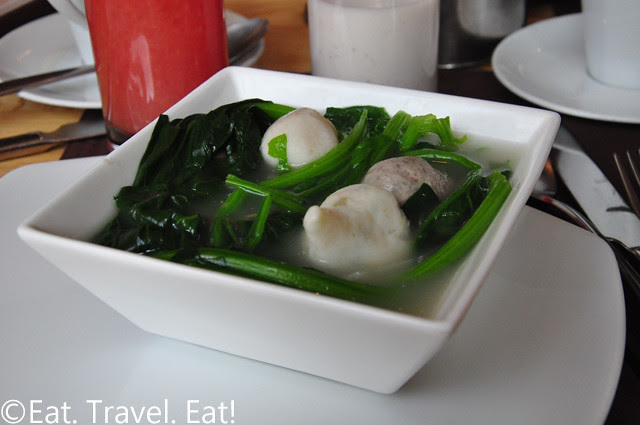 Since my companions were raving about the noodle station, I decided to go up and order my own bowl. They really liked the noodles-- the egg noodles for example had a creamy yellow color and were very springy and bouncy, with varying thicknesses. Coupled with the deeply flavored shrimp shell and pork broth, my companions had a noodle soup that was on par or even better than what we have had in Southern California!
Being impressed with the food already just in the hotel, we took note of what we needed to try in Hong Kong during our trip: chicken was definite as it we knew chicken in Hong Kong is very flavorful, while noodle soups and the famous Hong Kong egg waffles (gai dan zai) were other must tries.
Tasting my own bowl of spinach, fish balls with fishroe, regular fishballs, and meatballs with a pork bone broth, I was even further impressed. The spinach was so fresh and crisp, while the fish balls with fish roe brought memories of Shangri-La in the past. These special fish balls in my opinion are not offered in all Shangri-La properties, and it happens now to be that only this location has it from all the Shangri-La's we have been to in the past. As for the regular fishballs they were bouncy, but the meatballs were awkward, being ultra crispy in texture (when bit). I did like the pork broth though, which was porky, creamy, and smooth. The bowl was good to the last drop.

Eating some more food (not pictured) and being energized by the meal, we walked down to Pacific Place to check things out again after hearing that it was being renovated. The day had started out great- even if some jetlag was moving in, it was not hard to keep myself awake!

P.S. This is the 250th post including indexes here on Eat. Travel. Eat!