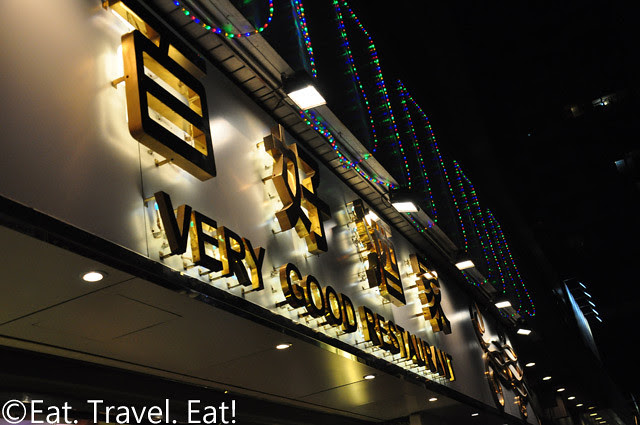 We were meeting up with friends the afternoon and soon enough it was dinner time! Our friend's area happened to be near North Point and Fortress Hill, where there are plenty of food selections. We all knew what our first pick would be: Choi Fook, the place where I found the joys of eating dried scallop and egg white fried rice. Unfortunately, arriving at Choi Fook gave us some bad news- they were not available due to the fact that it was the holiday season. Asian families typically hold reunions/get-together events during weekends and holidays and so popular restaurants like Choi Fook were completely booked. So we walked from restaurant to restaurant to see whether or not if they had any seats available. My friend and I went three restaurants in search for seats but the restaurants all said they had no room left; thus my friend had to find some other restaurants. I had no clue of the Fortress Hill/North Point dining scene so unfortunately, I could not help him. 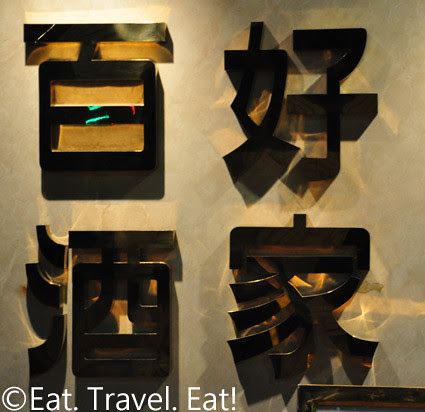 Very Good Restaurant was the next option. My friend stated that he felt Very Good Restaurant was not the best of the options he had (Choi Fook being the best in the area that was not in a hotel) but there were not that many choices left. So, we went in to Very Good Restaurant and it happened to be that there were seats! Still, the front desk manager was warning us- "Are you sure you want this reservation? You only have only about an hour or so to eat before the next guest who wants the table comes. Is this ok?" We accepted, and finally had seats for a proper dinner.

My companions decided to order a set menu for dinner. After all, set menus don't require plenty of thinking as to what dishes one would want. Less time to decide on food equals more time to talk with each other in this case. 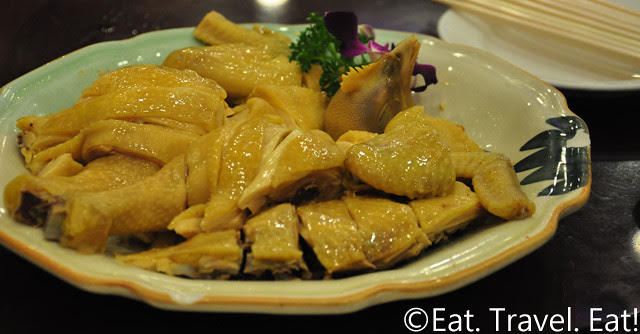 First up was a whole salt and peppered poached chicken. Hong Kong chicken as I stated in my last post is definitely more flavorful compared to what we have had in the United States- this would be our first experience with Hong Kong chicken this trip Lightly seasoned with salt and pepper, the chicken flavor was really concentrated and the salt helped the chicken flavor to become more pronounced. The chicken was also tender and not dry, with a nice pull. 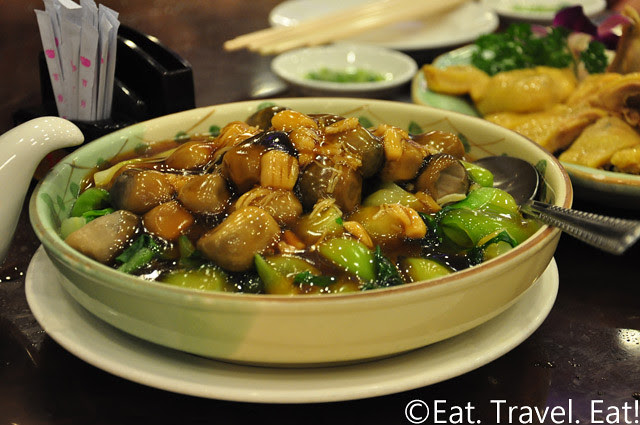 Second to arrive was a plate of straw mushrooms with baby bok choy. I was surprised biting into the round mushroom and noticed it had a happy face- just like what I saw months earlier on the blog, Mochachocolata Rita! (two posts actually: "Smiley Straw Mushrooms with Tong Ho (Edible Chrysanthemum Leaves)" and "Easy Microwaveable Side Dish: Zucchini & Mushroom in Butter & Herbs") However, these mushrooms tasted more like as if they were canned and made "special" with some dry scallop, oyster sauce, and a slurry mixture of starch and water that makes everything look shiny and pretty. The bok choy tasted better this way but overall a typical vegetable side dish. Traditional style, and to my tastes a bit oily as well...my companions probably forgot to say, "less salt and oil" unlike how we usually do in California!

As to the comment I left on  Mochachocolata Rita at the post "Smiley Straw Mushrooms with Tong Ho (Edible Chrysanthemum Leaves)", I've actually eaten plenty of these after researching them online at the Mycological Society of San Francisco- the ones I have eaten are shelled, like the mushrooms showing at their page, "Straw Mushroom."

Third was some canned abalone with goose feet which was served on top of a base of iceberg lettuce. I didn’t try much of this, I only had some of the abalone which was probably canned. Still, the sauce provided plenty of flavor and the abalone had a nice pull but was very tender- a sign that it was canned. 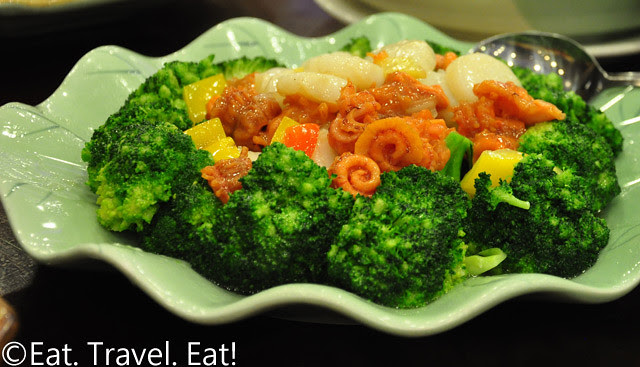 Fourth to arrive was a plate of broccoli with squid, peppers, and scallop. This was lightly flavored and most of the flavor simply came from the ingredients themselves along with some garlic and salt. Simple and easy, nothing special. The scallops and squid were not rubbery, but they were nothing too special neither. Dried scallop and egg white fried rice just happened to be the fifth course! Although this was not at the original restaurant where I started to eat way too much of this dish, I still enjoyed this rendition. The inclusion of carrot in addition to the usual gai lan and other ingredients and overall was quite light, not too oily. I would have liked some more dried scallop and egg white but overall it was pretty good. Since my friends seemed to want more of this dish I ate less. I just thought to myself that there would be plenty of eating by the end of the trip- why not wait a bit?

Portions of chicken and sharkfin soup were handed out later. Again, this was nothing too special, with the typical flavors seen in these types of soups. In the soup were some chicken strips (a bit dry from boiling but that is also typical) and a mix of fake and real sharkfin- more of the fake than the real, but that is expected in such set dinners. Real sharkfin is expensive and harmful towards sharks, so I don't eat it unless some one happens to order a dish with it in which this case there was. 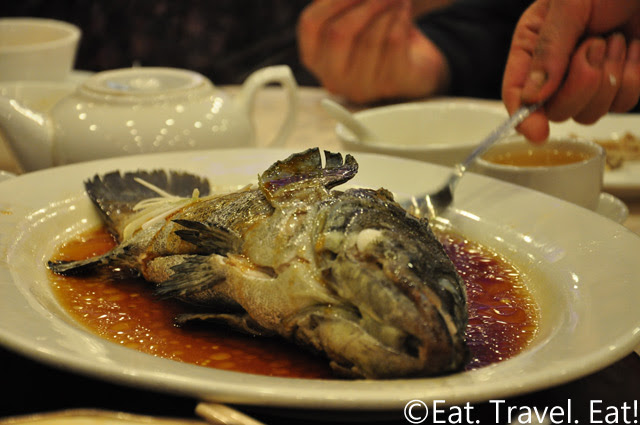 Next was a steamed fish- I don't know the type. Being of a large size, this was undercooked, with the parts close to the bone still somewhat rare. From past experience we knew that large fishes typically are not steamed to perfection as with smaller fishes  due to the size, and so this was somewhat expected. Unfortunately the fish wasn’t very fresh. Actually, most set dinner fishes were never very good from my experience- usually the taste is compromised due to a not so fresh fish. 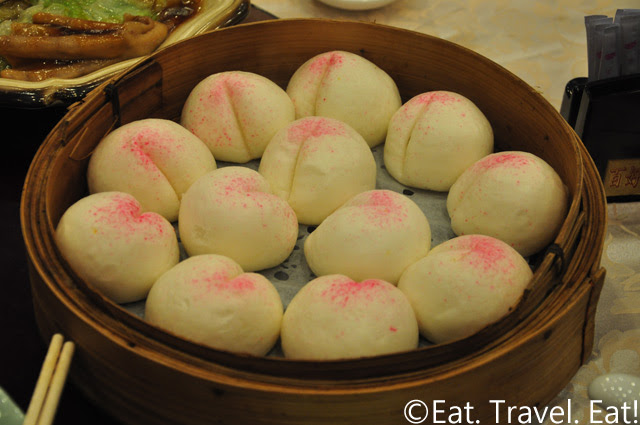 To end the meal, we had a dessert of longevity buns/ peach buns (shou bao- Cantonese phonetic). These buns are typically eaten during birthdays and celebrations to signify longevity; completely fitting the occasion. Besides, these buns were quite delicious. Inside the soft, steamed bread exterior was a filling of lotus paste, with a piece of salted egg yolk. For those who have not tried these buns, eating these longevity buns is similar to having a mooncake, but with less lotus yolk and the addition of bread. They can also come in red bean fillings. 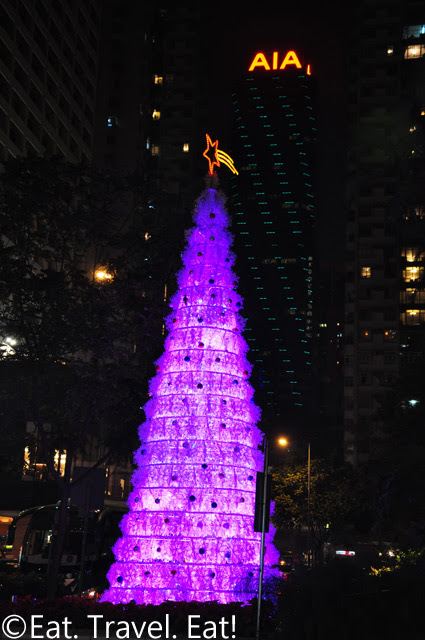 (City Garden Christmas Tree & AIA building)
Overall the meal was nothing too remarkable- my friend felt this restaurant would not be as great as Choi Fook, and I happened to feel that way too after enjoying the meal- but with these reunions the people is what really matters, and not the food. If the food was great, it would be a plus, but normal and typical is fine too- especially with such busy situations in the restaurants we encountered.

Now of course if we had ordered by ourselves then my critique probably would be better as the food is more towards my taste, but for a set menu situation I'd say the satisfaction rating for this meal would be quite high. It was much better compared to what I have had in California for a set meal, and it was a good value. It would take us another meal before we realized we really needed to order what we wanted instead of a set menu for full satisfaction- more on that later. 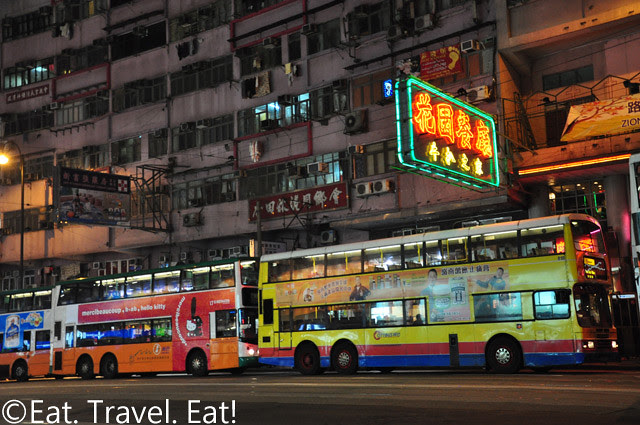 And what is this picture in the post for? Buses are one of my friend's favorite things- he has the Hong Kong routes essentially memorized with his frequent travels, and so this picture is for him. Pictures of buses with a backdrop of apartments at Fortress Hill/North Point area.

After taking some more pictures we went back to the hotel for a good night's rest. Although it was still quite early at night, we were easily able to sleep thanks to the jetlag- one long day allows for a earlier rest, and this case the jetlag was very helpful!

David Ng said…
Love the English name, "Very Good Restaurant" In Hong Kong, I do expect very good food though seeing as how there is so much more competition and getting by with sub par quality isn't likely.
April 21, 2011

Everyone that I have shared this post with has commented on the name too! Was "very good food" a pun intended? :) Yes I don't believe getting by with such quality will be easy but probably they have something enticing to keep up in Hong Kong's busy restaurant scene.
April 21, 2011