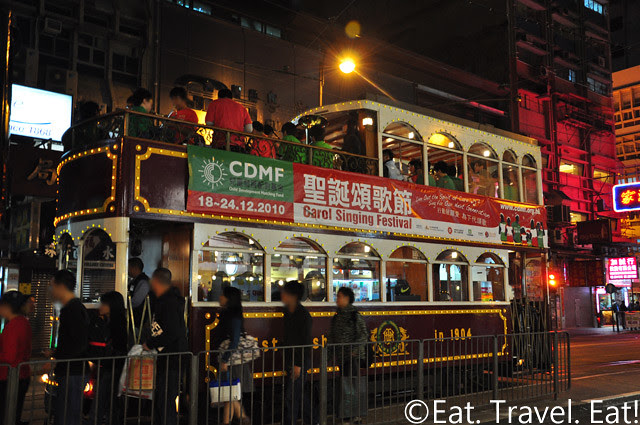 The Winter Solstice is yet another time where families get together in Hong Kong, and so we did the same, heading to Sheung Wan for a dinner with family and friends. On the way to Hei Yuet Seafood Palace Restaurant, the restaurant my friends selected for the occasion, we bumped into a special ding-ding tram/trolley which had a live band and caroling group which sang several English Christmas/holiday tunes. 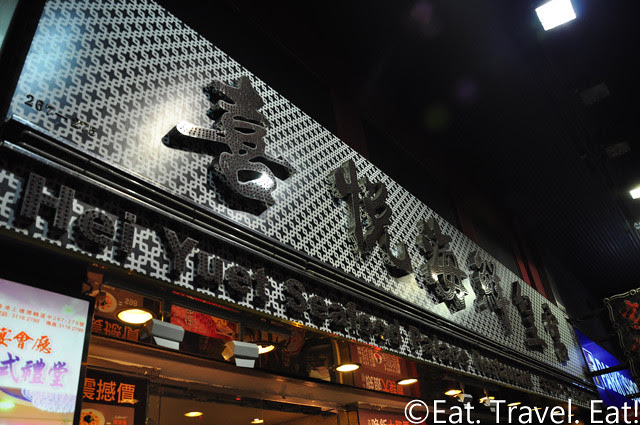 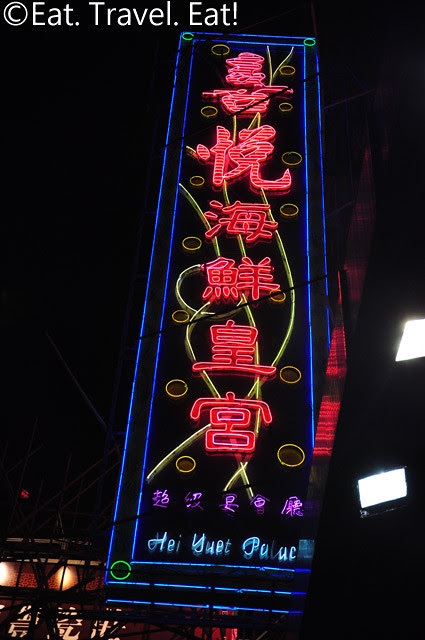 In order to actually reach the restaurant, we had to go up an elevator from the ground entrance. Other people along with our party stuffed ourselves into the elevator to reach the different levels of the restaurant- yes, this restaurant has multiple stories! 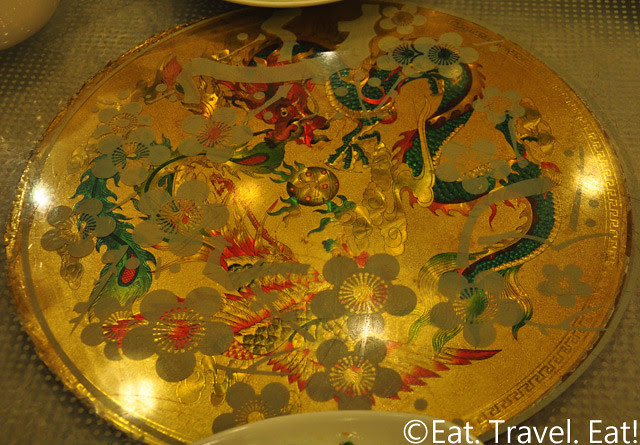 Arriving at the restaurant, the receptionist gave us the table that reserved; however, it seemed as if we would have less people eating together than we had planned. No problem- we were quickly able to invite people over and we ended up with having more people than we had planned. This is one of the great conveniences of having family and friends nearby; it is easy to invite them over on short notice! 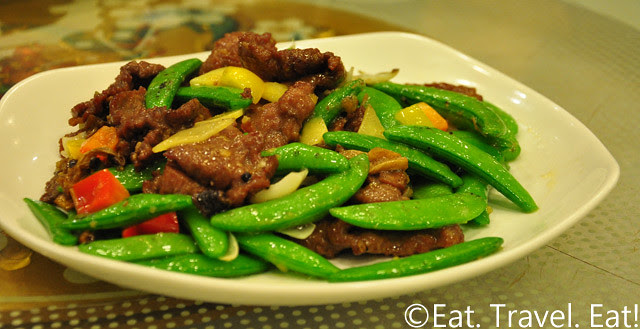 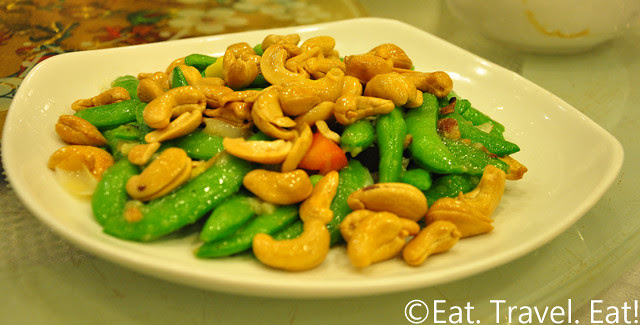 With our "failures" at ordering set menus earlier in the trip, we decided to be more careful ordering this time, making sure that all the dishes ordered would be items that we would probably enjoy. It happened to be somehow that we ordered two dishes with almost the same ingredients- garlic, ginger, gingko nuts, bell peppers, and sugar snap peas- but with one difference:  beef slices for one and fried cashews on another. Both were quite light and simple, with all the ingredients coated with garlic flavor. The cashews were very crisp from the frying. Overall they were quite delicious, but as with most of the items we have tried on the trip, they were slightly oilier than we would have liked. 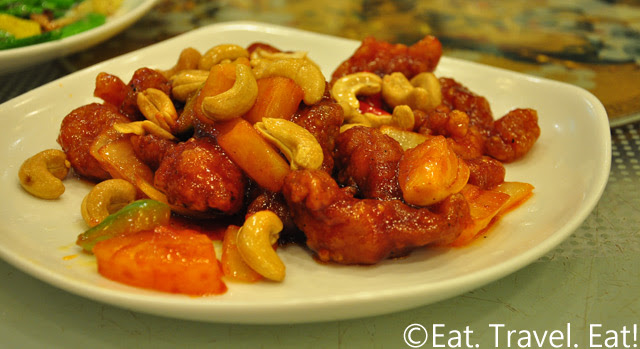 We also had a plate of Sweet and Sour Pork, of which came with crispy fried pork pieces, cashews, canned pineapple, peppers, and onions. I did not get to try the pork but the overall flavor of the dish was typical for sweet and sour pork-- nothing unexpected. 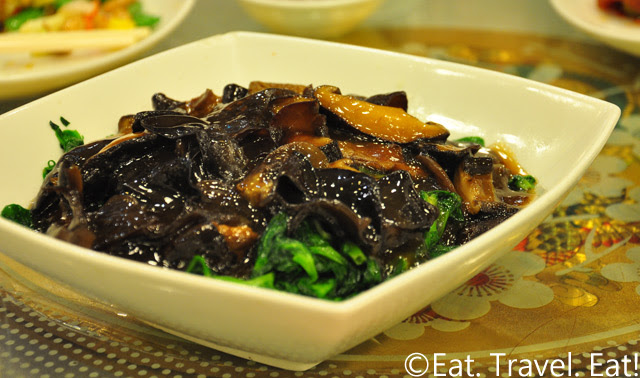 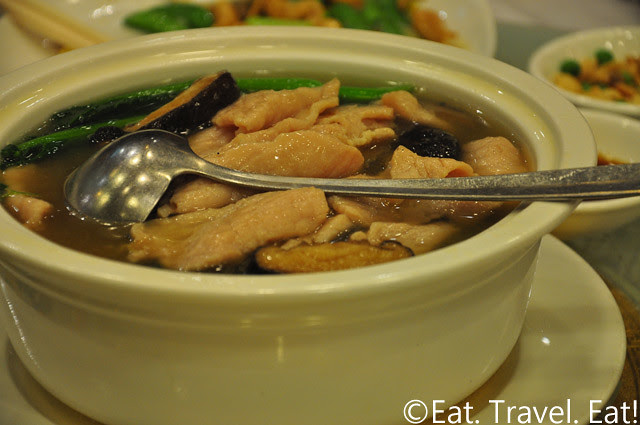 We also ordered a chicken, choy sum, mushroom, and egg noodle soup. It was meant to be a light dish for us and it served its purpose- bouncy noodles with a rich but clean flavored stock. I liked the vegetables but didn't care for the chicken. 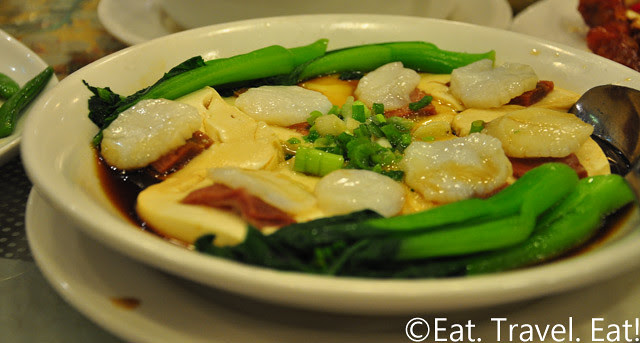 I really enjoyed this light steamed tofu with smoked ham and scallop dish; the tofu had lots of bean curd flavor and went well with the flavorful soy sauce, while the scallop and ham added additional flavor. Scrumptious foods don't need to be fattening! 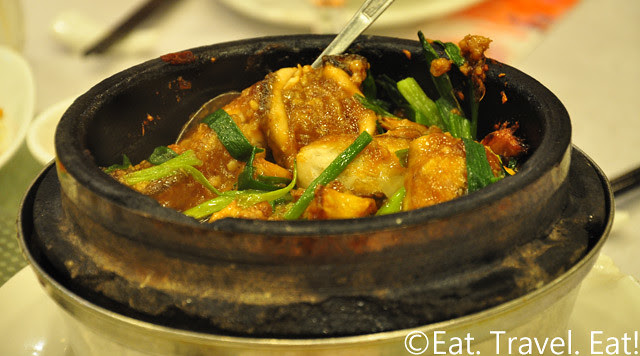 Somehow a hot pot of oysters came to our table as well (probably a free dish or part of a set menu, I didn't really follow the ordering), but I did not try them. They did not look really good and were quite oily though. 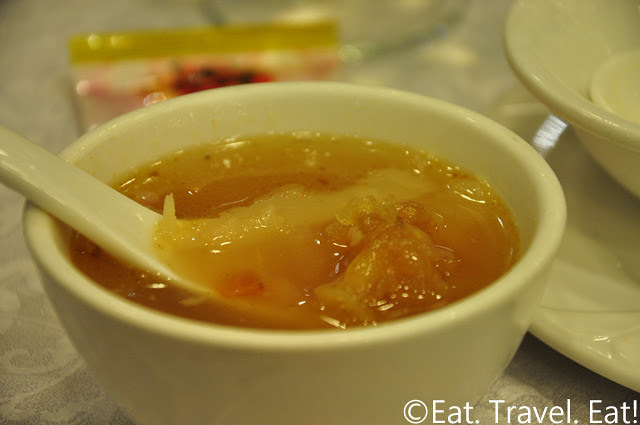 A slow cooker soup arrived next; apparently it was quite expensive, but it was made up in taste. There were plenty of quality ingredients, other than the fact that it again was slightly oily. 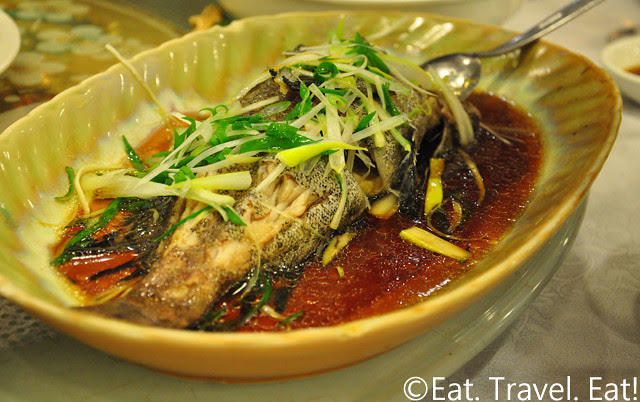 We also had a steamed fish probably also from a set menu in which we modified. I did not get to try it, but in terms of looks it didn't look as great as some that we have had in the United States. 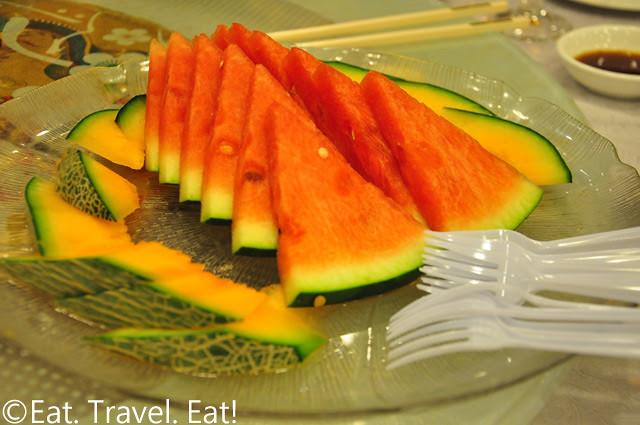 Dessert was full-fledged; not only did we have melons, we had red bean dessert soup as well! These melons were all very crisp and sweet-- perfect for a closer. 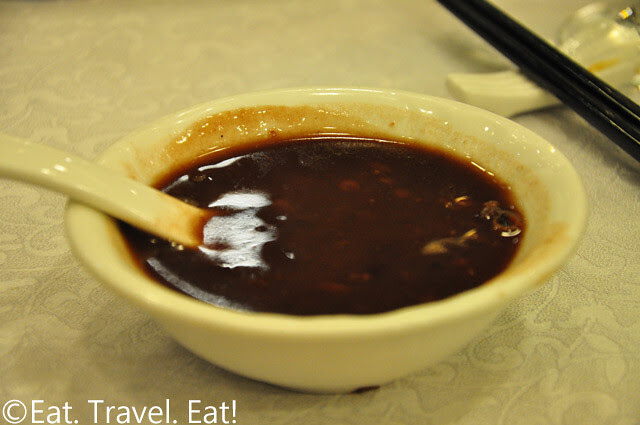 Everyone at the table liked how the red bean soup was brimming with red bean and orange peel flavor. 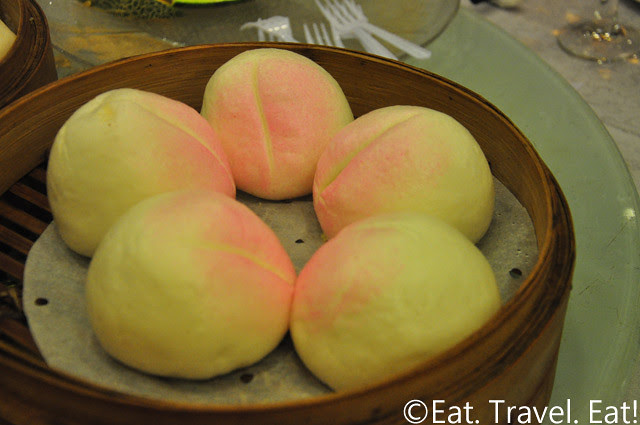 And since it was one of my friend's birthday, we just had to also order some longevity/peach buns. 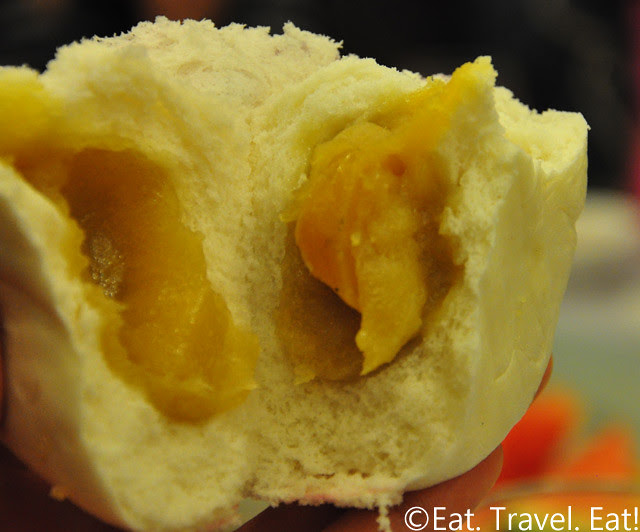 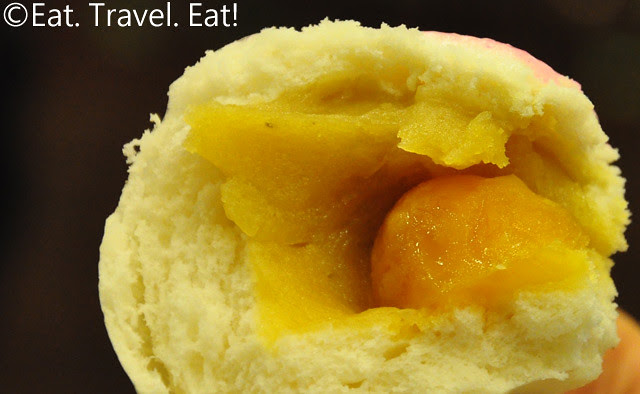 Hei Yuet's version was much larger in size compared to Very Good's; like Very Good's, there was a salted egg yolk, lotus paste, and soft steamed bread exterior.

Overall Hei Yuet Seafood Palace Restaurant definitely was "very good" for its price range. We liked the dishes that we ordered with a few exceptions on the amount of oil, but the flavors were great. 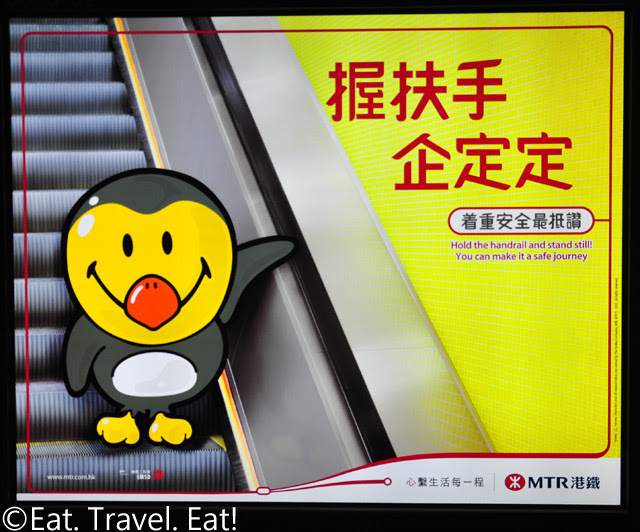 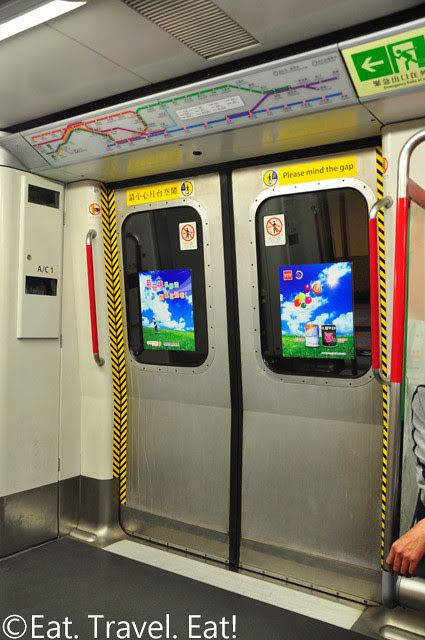 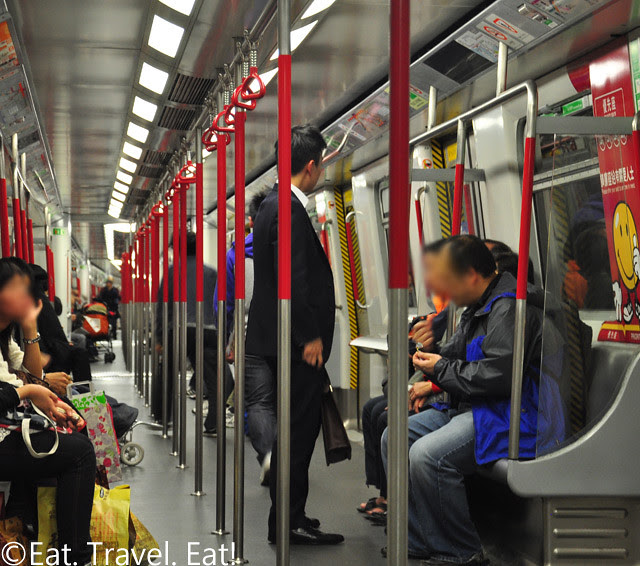 Soon enough the dinner ended, and it was back onto the MTR for the ride back to the hotel. It was pleasant riding with less people on the train; typically they are quite full during the day time, but we happened to skip the busy section of the MTR at night by getting out at Admiralty, and not Causeway Bay.

A full night's rest and I was getting better; exploring the city was finally possible. However, it wasn't the case for the rest of my companions!