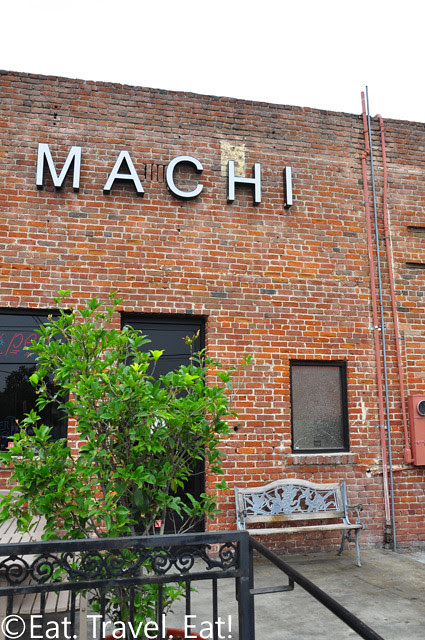 Don't judge a book by its cover. From the outside, Machi Fusion seems to represent its name well-- the dark windows and the modern looking signage gives an impression of a restaurant catered to a younger crowd. 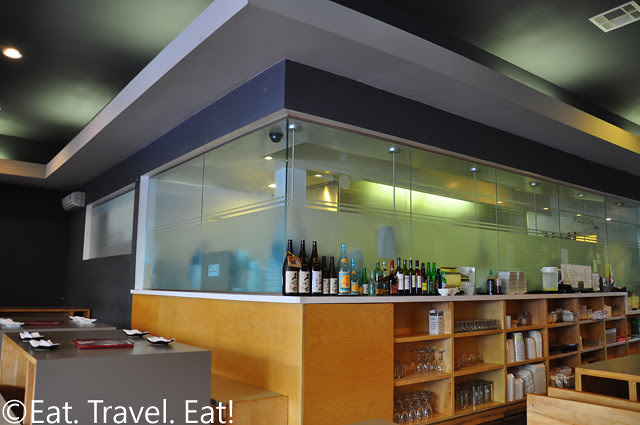 Inside, the same story continues. Plenty of simple, clean cut lines and an exposed brick wall.

A glance at the menu though usually surprises most people; Machi is a combination of two ideas that would usually be separate restaurants. During the evening, it is a karaoke/pub/bar style restaurant with Taiwanese fusion food (the Taiwanese aspect is already different than the usual fusion==Pan-Asian), but during the lunch hours, Machi Fusion serves food of the restaurant Nice Time Deli, a (traditional) Taiwanese restaurant that the owner of Machi used to operate. There are two menus for lunch as a result-- one from Machi Fusion, and one from Nice Time Deli. 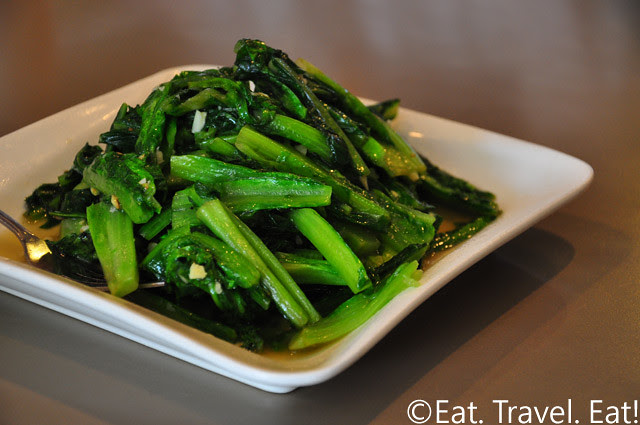 We however ended up ordering dishes from the Nice Time Deli menu. Machi's sauteed "A" vegetable (A菜) or arden lettuce is sauteed with garlic and was a pleasant starter to our meal. Arden lettuce, for your information, tastes somewhat like like romaine lettuce, except that it has more "green" flavor. 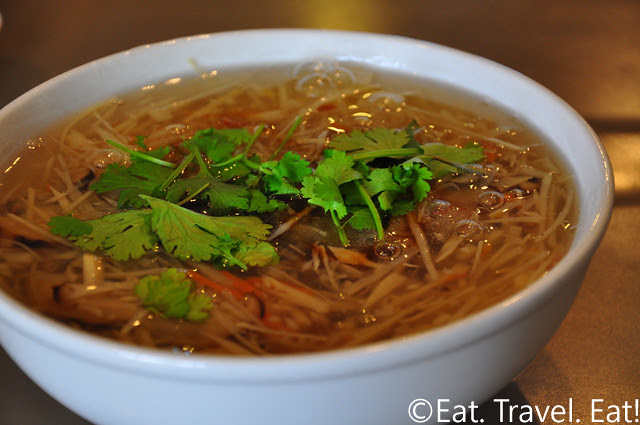 We also ordered a bowl of noodles; if memory serves me correct this is squid potage. It consists anyway of mushrooms, thin rice noodles, bamboo, carrot, and ground squid in a thickened broth. 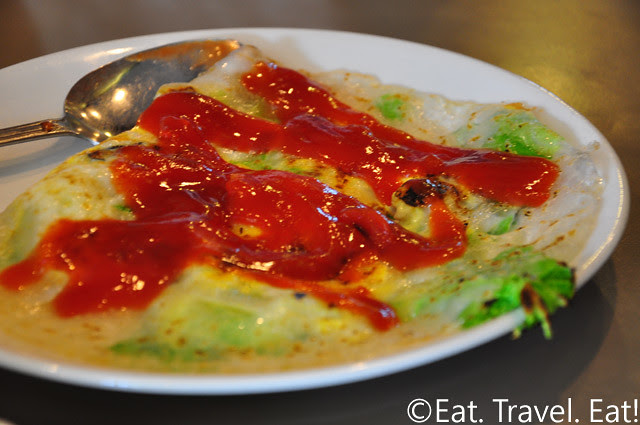 I was quite surprised to see Machi's rendition of the oyster omelette; the omelette itself did not look like how it used to be served at Nice Time Deli (it looked bigger but also flatter), and the tyipcal tomato-ketchup sauce was replaced with a swiggle of straight up tomato ketchup. However, when it came to actually tasting the omelette, it was reminiscent of the former version: a mix of lettuce, oysters, and scrambled egg encased in a thin layer of crisp, yet chewy rice flour mixture. Substituting the typical tomato ketchup based sauce for straight up ketchup in my opinion made no difference to the flavor of the dish; the substitution however is quite surprising. 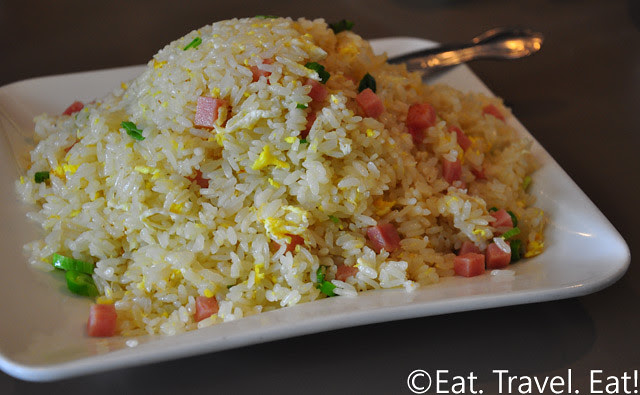 As a young child, the dish I would always order at Nice Time Deli would be the Ham Fried Rice. And so, I just had to order the Ham Fried Rice at Machi Fusion for comparison. Machi's version of the dish is not surprising almost identical if not the same as how it used to be at Nice Time Deli- a slightly oily dish with chewy, short grain white rice, thin strands of scrambled egg, cubed ham, and green onion for brightness. I like to pair this dish up with a tangy sauce for more additional flavor; that sauce I'll show you in after a few more pictures. 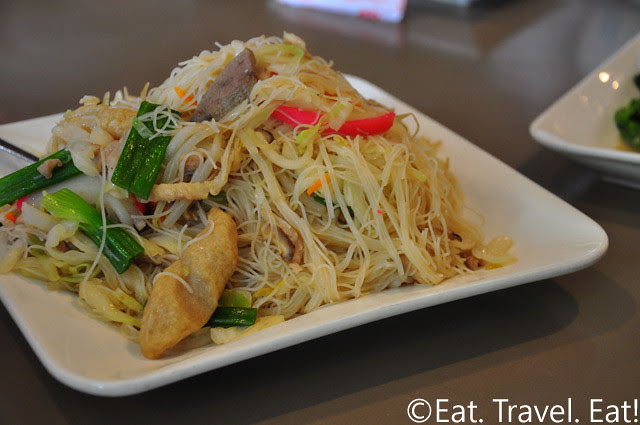 The house special rice noodle dish used to also be one of our favorites at Nice Time Deli, and so we ordered it at Machi too for comparison. Both versions are quite similar-- there are plenty of rice noodles in addition to various meats (fish cake, fish paste, pork, et cetera). 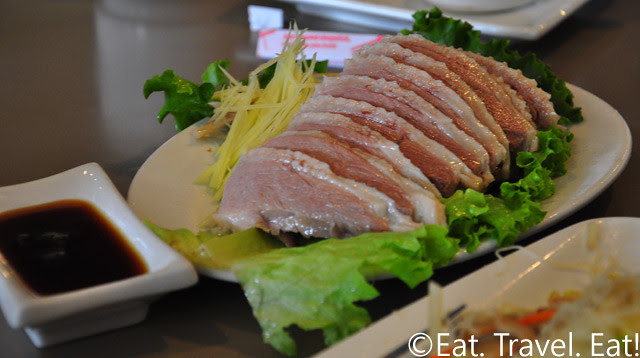 With the recommendation of the waitress/manager, we also ordered the sliced goose. At around 15 USD, this dish is not very friendly on the wallet! (The special tangy sauce I was talking about earlier is in the left corner of the picture above.) 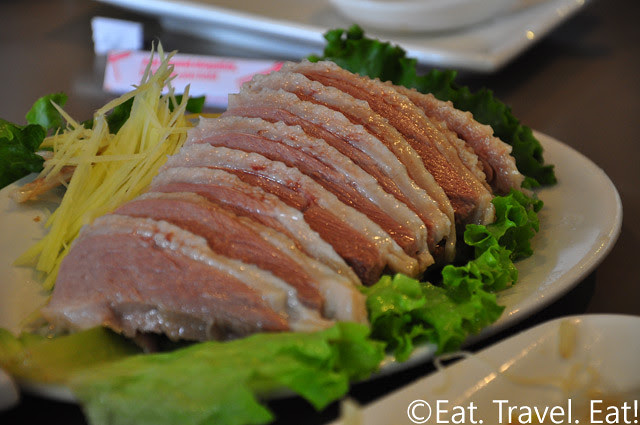 Suffice to say, the sliced goose is quite tasty, if not for the high price tag. There is plenty of freshly cut, tender goose meat (no metallic sheen on the meat), and it goes great with the sauce. Be careful when applying the sauce, as too much sauce will overpower the flavor of the meat.

Machi overall serves up similar, if not completely the same, dishes as Nice Time Deli does. For those who used to go to Arcadia's Nice Time Deli (now replaced by 101 Noodle Express) often, they will probably enjoy lunch at Machi. Other than the price (a complaint that we had on Nice Time Deli as well), Machi serves up competent Taiwanese fare, if not the best in the area.