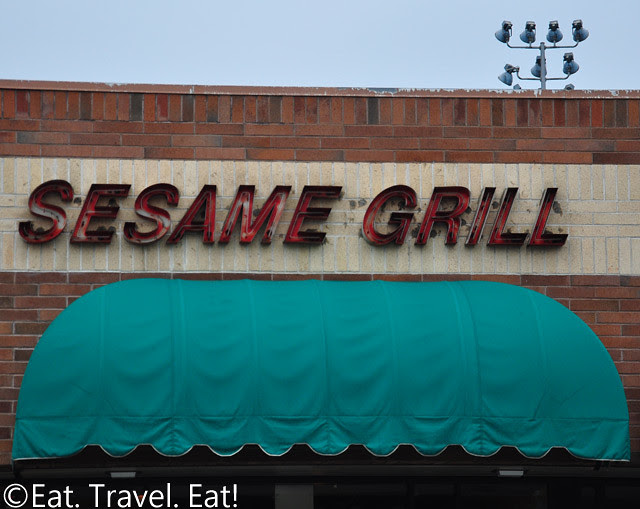 Over this summer, I have gone to Sesame Grill several times and have tried some new items that I'd like to share with you readers today. There are definitely more restaurant posts coming; likewise, more travel posts are coming along the way! (tell me what you want more in the comments section please!) 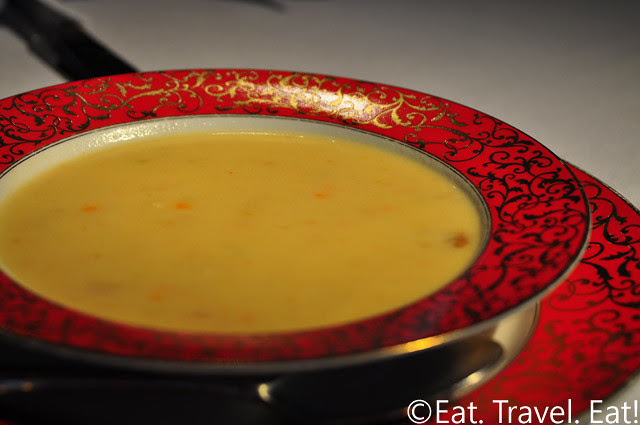 One of our visits was during Father's Day; as a result, the restaurant was decked out with white tablecloths, brighter lights, and a special menu in addition to the regular menu. In the past, only special menus were available on holidays, but in this occasion everything was available-- good for those who like options! One of my companions ordered from the special menu, of which he selected clam chowder as the appetizer.

Sesame Grill's clam chowder is quite refined; as you might notice in the picture, the mirepoix (onion, carrot, celery) is cut into miniscule cubes. Although the broth has plenty of clam flavor, (as expected from quite visits) it is quite heavy in the cream and butter load. It goes well with the freshly baked bread as a substitute for the California Dairies butter. 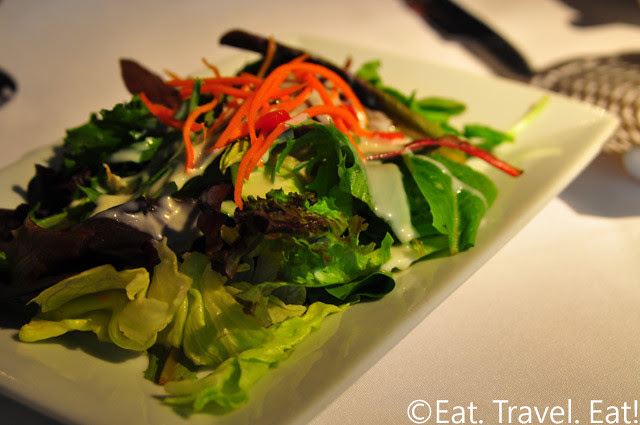 The mixed greens have stayed essentially the same as in the past; there's still the premixed selection of salad greens and the "new" creamy dressing that is slightly sweet and tangy. After all these years, the greens are still a fresh, green appetizer we enjoy before heading onto the lunch entree. 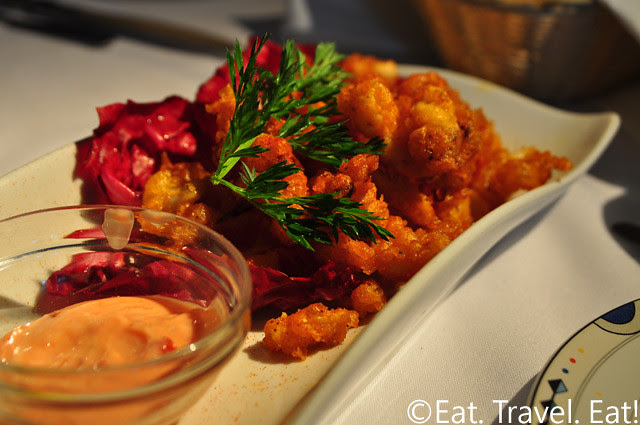 The manager talked about calamari being available, and after listening to her description of it one companion was willing to order it. This version of calamari had a light, crispy batter enclosing the tender, thin pieces of squid; lemon and the strawberry mayonnaise/sauce brightened the calamari. However, the dish overall was still somewhat oily in residue; also, it was the second plate we received of the calamari. The manager promptly took the first plate served to us "accidentally" away after it was served; my companions commented that it was probably overcooked as the batter was of a darker brown quality. 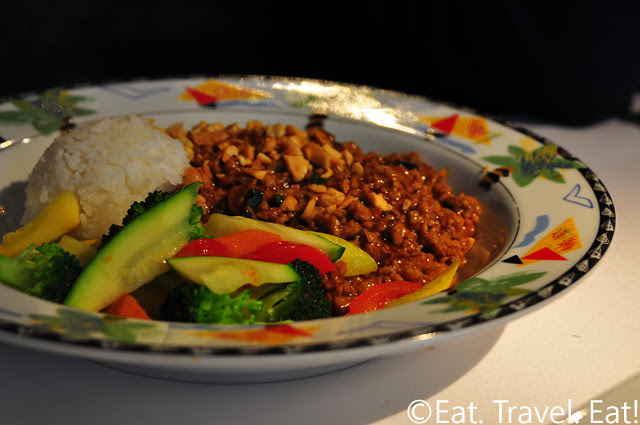 My companion ordered the Thai Ground Pork with steamed rice off the menu for another companion visiting from Hong Kong that would be welcome trying anything in the America. Being accustomed to Hong Kong standards, she was not accustomed to the rice of which was large, slightly hard, but fluffy, and the pork, which was doused with more oyster sauce than other flavorings. This is more of a dish inspired by Thai cuisine, but ends up being more of a fusion instead of an attempt to do Thai food. 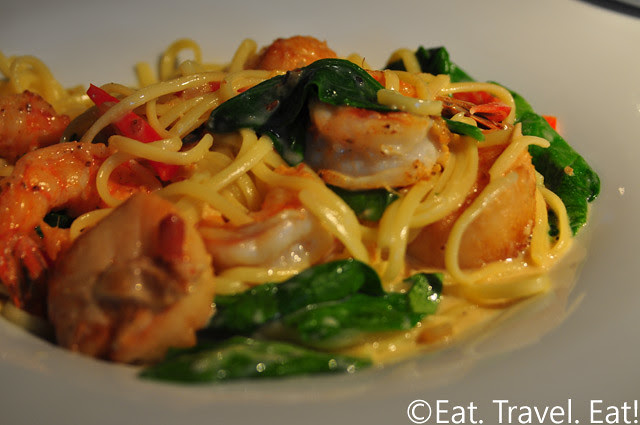 Off the special menu, my companion ordered a shrimp, scallop and spinach linguini with a cream sauce. This was comparable to other cream sauced based pastas at Sesame Grill; the cream sauce is creamy, yet not overwhelmingly rich, while the linguini is cooked slightly past al dente. The interplay between the rich seafood and sauce to the vegetables make a balanced and tasty cream based seafood pasta dish. 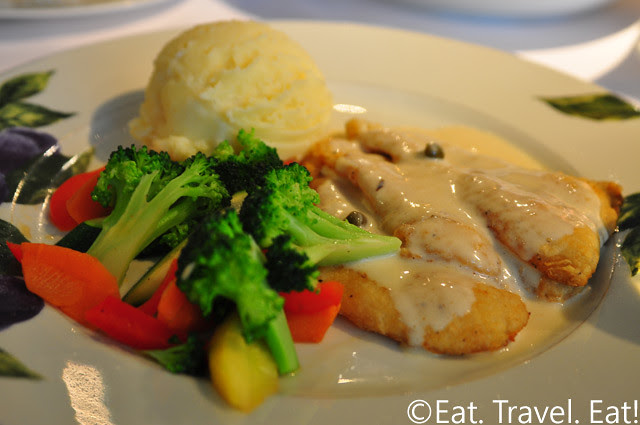 I ordered the Sandabs off the menu, having ordered Sandabs during a stop in Monterey during my San Francisco trip; I wanted to compare how sandabs could be prepared. Sesame Grill's version was delicious; the tender sandabs were lightly breaded and pan fried for a light crunch, and the bright and creamy lemon caper sauce went well in bringing the steamed veggies and mashed potatoes together. For around ten dollars, this really is a great fish option for lunch! 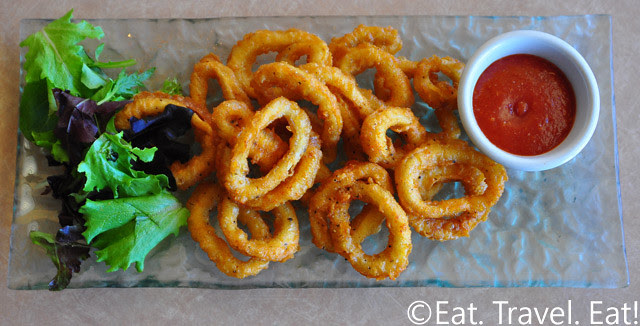 On another visit, the manager discussed to us that the kitchen has been adjusting the Calamari recipe; since the companion who ordered the calamari last time was not here during this visit, we declined the offer. The manager still wanted to share the fruits of the kitchen's labor, and so she surprised us by handing us the calamari dish when our appetizer of vegetable rolls (not pictured) arrived.

The dim spot of our location wasn't very good for taking pictures, so I took the plate to a brighter location in the restaurant and came out with this result. Do you like it?

This version of calamari had squid rings instead coupled with a few salad greens and a cocktail sauce. Much as we hoped to enjoy it, the squid was overcooked and as a result was somewhat rubbery in texture. We did like the cocktail sauce though; fried calamari with cocktail sauce is a pairing that works well. 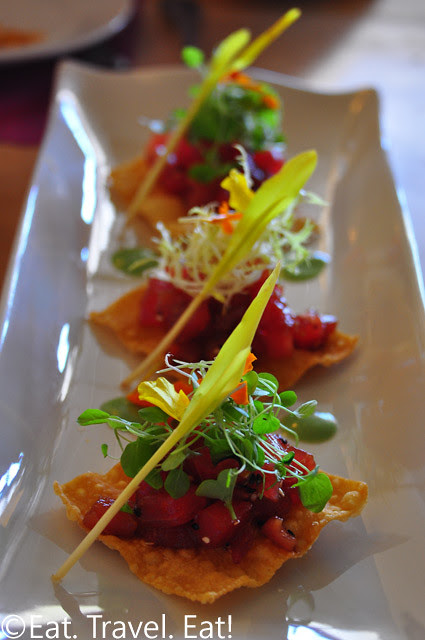 Just as we thought we had too many appetizers, the manager surprised us yet again with a large, beautifully presented platter of tuna tartare. Likewise with the calamari, the manager paid for the tuna tartare as well. We paid back in tips, of course, as all should do when a restaurant unexpectedly offers free items for the customer's enjoyment. 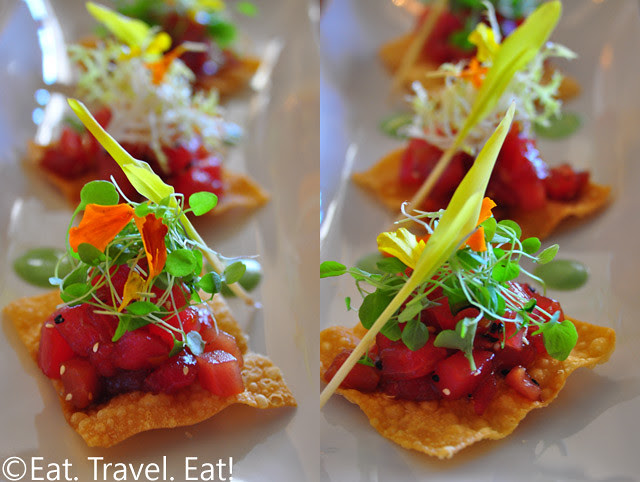 The tuna tartare, unlike the calamari, was fantastic. The soy sauce based marinade may seem commonplace in other restaurants, but this version stands out with the addition of black and white sesame seeds, sesame oil, and a slightly spicy burn in the background. On the bottom of each mound of tuna tartare is a wonton wrapper, which clings to the plate with a dollop of cream cheese. Coupled with the wasabi mayonnaise (the green dots on the picture you see in the picture), each bite was memorable and tasty. The plethora of flavors and textures worked well and was definitely tasty and memorable; I'd gladly order this tuna tartare again to celebrate a special occasion in a future visit. 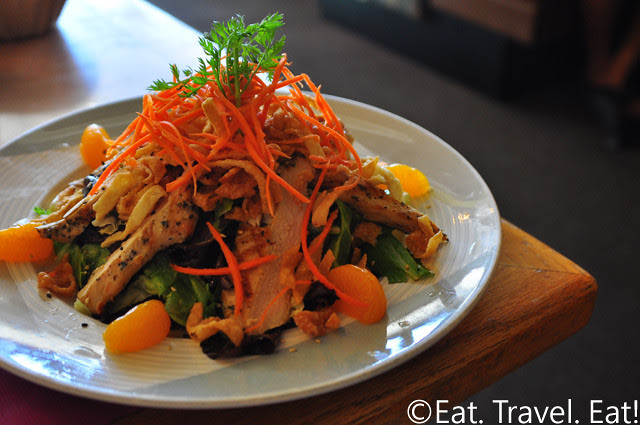 Moving onto the actual entrees; I tried Sesame Grill's Chinese chicken salad, while my companions kept with their usual items of which I've described way too many times on Tripadvisor and on my last recent review of Sesame Grill. As a result, I only photographed my plate of food. 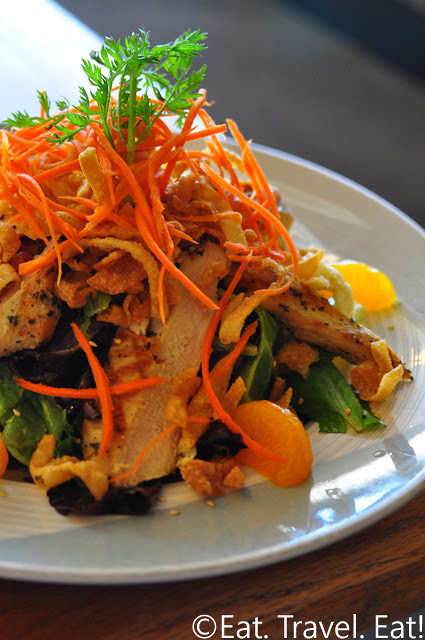 The Chinese chicken salad starts out with the same mixed green salad base; in fact, it even has the same dressing as the mixed salad greens desribed earlier in the post. What makes this different is that there are slices of grilled chicken, fried wonton strips, canned mandarin oranges, and sesame seeds sprinkled on top of the salad base.

I find the amount of wonton strips slightly overbearing, but then again, when I visit Souplantation, I tend to move the wonton strips aside when grabbing the Wonton Chicken Happiness salad with tongs from the serving bowl. The chicken on this occasion was slightly dry, but otherwise it is a pretty good salad with a reasonable price. 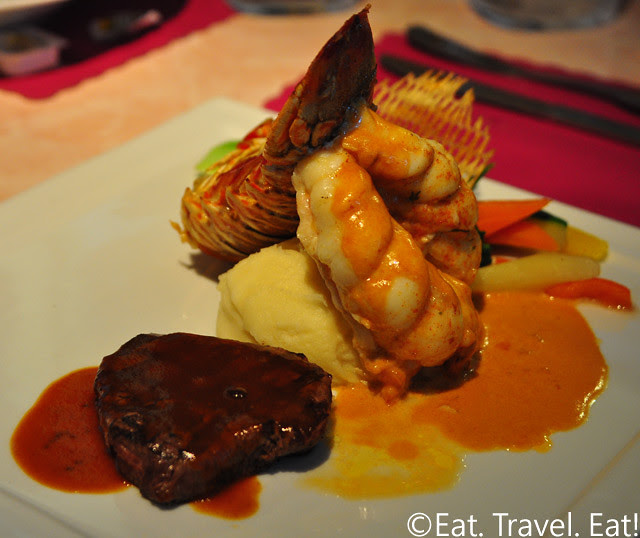 On our last visit, we ordered a surf and turf combo- a lobster tail served with lobster sauce and a eight ounce filet mingon served together on one plate. It was interesting how the lobster tail was removed completely from the shell; what you see in the picture is one complete piece of lobster tail meat and the empty shell of what used to house that meat! The lobster meat went well with the decadent, creamy lobster sauce, although it was slightly overcooked. The filet mingon was likewise delicious; our server suggested us to have it cooked to medium and as a result it was beefy, tender, and juicy. It may not have been the best filet mingon I've ever had but it is definitely a solid rendition. 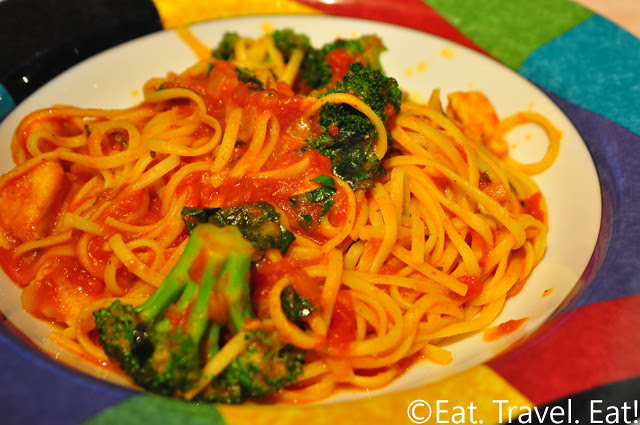 I wanted to order the usual Chicken linguini again on this visit, but when the waiter gave me an option to have the linguini tossed in tomato sauce, I took his offer. There are no mushrooms in this variation, but the marinara sauce makes up for it; tangy and flavorful, the combination of pasta and marinara sauce is traditional yet comforting.

Overall, Sesame Grill is still a great option for those who like a fancier option in the area; there are several kinks with the food that will hopefully be remedied soon (they are vigilant in reading the reviews), but the service is awesome--friendly and unpretentious. If you happen to be in the area, try it out (and the desserts as well...not described in this post but they are delicious).

Disclosure: As stated earlier in the post, but to iterate: Sesame Grill has paid some of the costs of the food (tuna tartare and calamari respectively) of which we gave back in tip; the opinion stated is solely my own and has not been altered by the restaurant's management.

See past reviews of Sesame Grill here at its INDEX page.