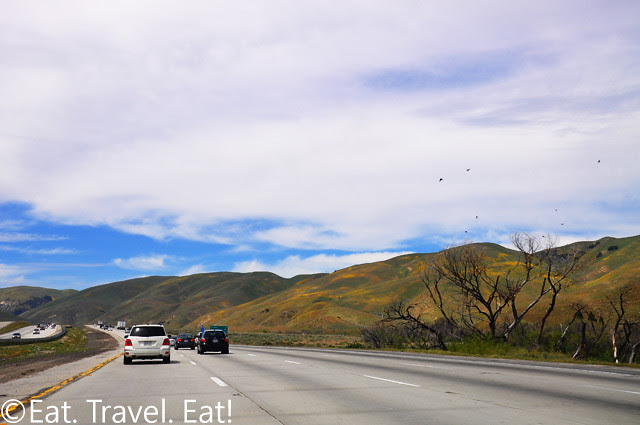 There are certainly a multitude of ways that one can get from Los Angeles to San Francisco, but driving allows one to perceive the amazing landscapes along the way. Driving to Los Angeles to San Francisco can also be done in several ways; one can pick the Interstate-5  for the shortest drive, the U.S. Route 101 for a "more interesting" drive, or the State Route 1/ Highway 1 for a long, oceanside drive. 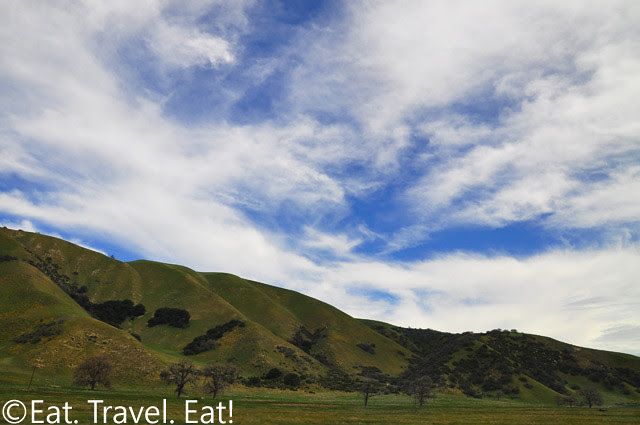 Although my companions and I chose the 5 freeway to go to San Francisco, we still passed by some picturesque areas: plenty of farmland and mountain views. Maybe it was coincidence, but the blue sky and beautiful clouds enhanced the appearance of everything we saw during this drive. 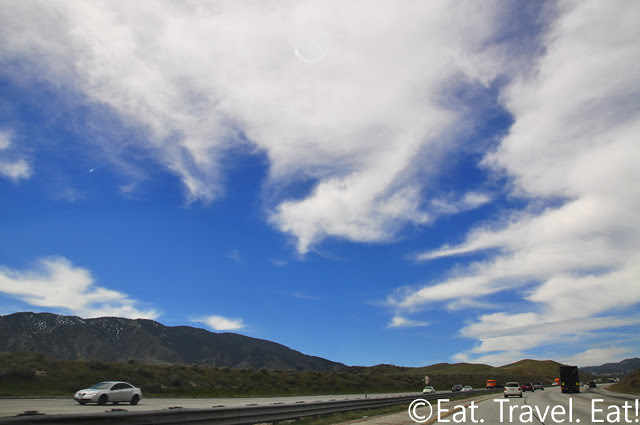 The clouds that day were beautiful; arranged in beautiful patterns, it was easy for me to get distracted from my reading selection. In this picture it seems like as if a fleet of clouds are moving towards one direction. 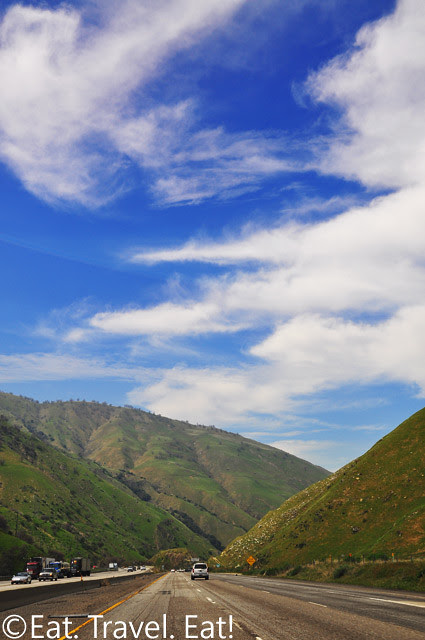 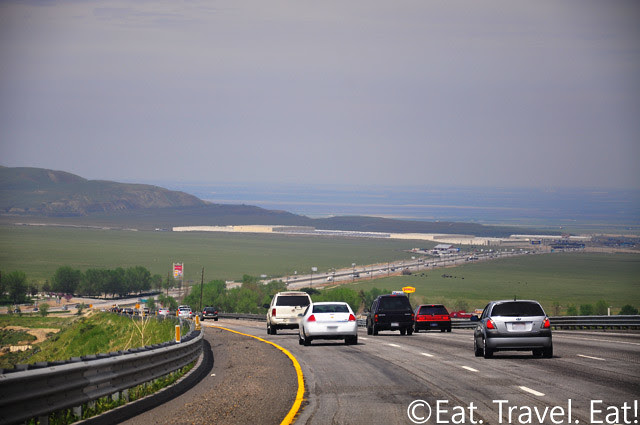 Simple scenes such as a curve around a hill were so beautiful thanks to the lush greenery in the area.

We happened to also see lots of farmers at work in the wide expanses of farmland; living in a metropolitan/suburban area, it is somewhat difficult to see where our food actually comes from, and this drive up through the Central Valley region was a great way to see and learn how the farms operate.

For a rest stop, we stopped by at the Murray Family Farms' Farmer's Market. They had large signs on the freeway on what they offered which prompted us to stop. 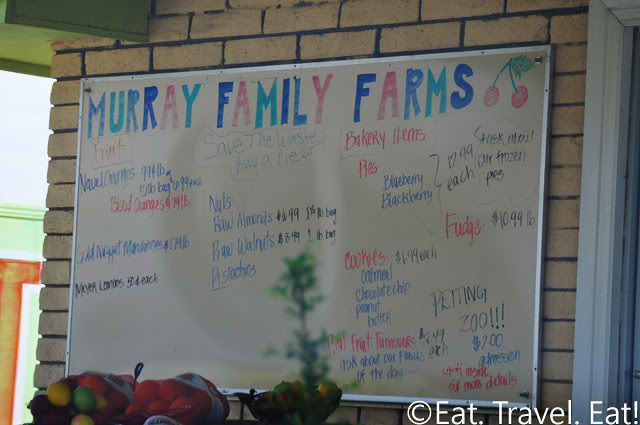 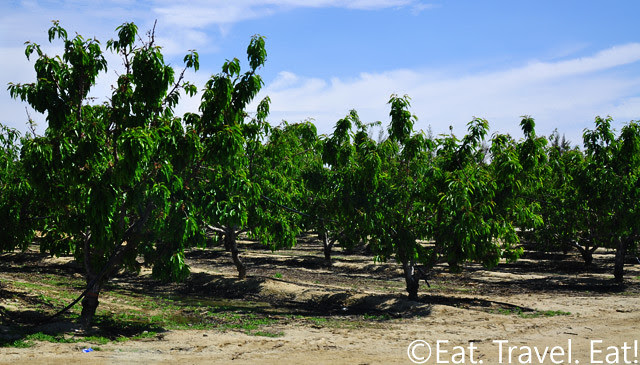 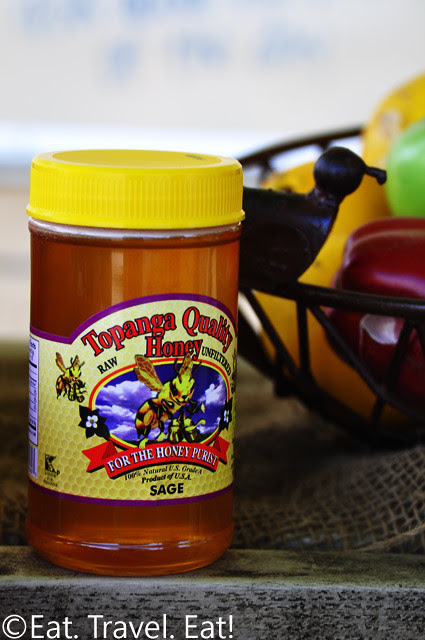 Much as I enjoyed looking at the various citrus fruits on sale (at relatively decent prices), I did not like how they were selling products from other businesses at an inflated price. This Topanga Quality Honey (Sage) can be found at Whole Foods, Fresh and Easy, and the manufacturer itself at significantly lower prices than the 10+ dollars we paid per jar of honey. The honey however is delicious; clean, sweet, yet thick with a viscosity similar to maltose. 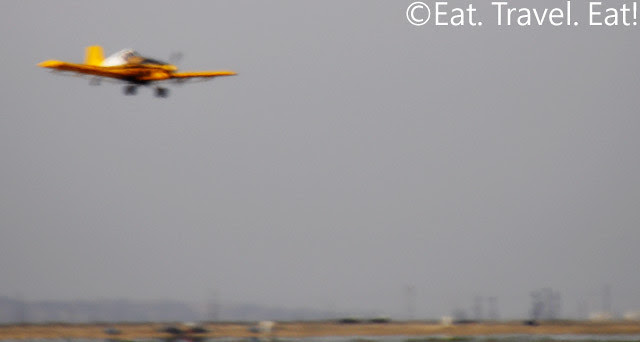 Right after departing from Murray Family farms, we spotted an insecticide plane. Apologies for the blurry picture! 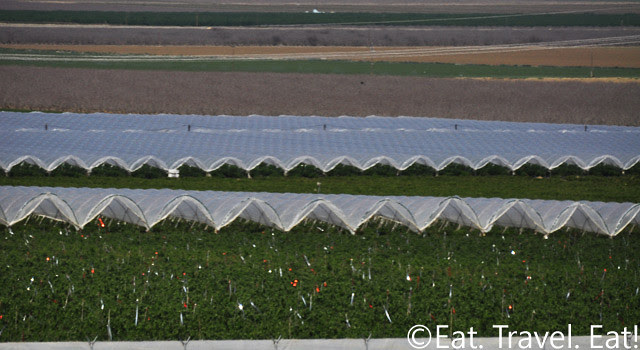 Continuing on the drive, we encountered yet more large expanses of farmland which grew other crops. The vibrant color produced by the melange of crops is certainly a sight to see. 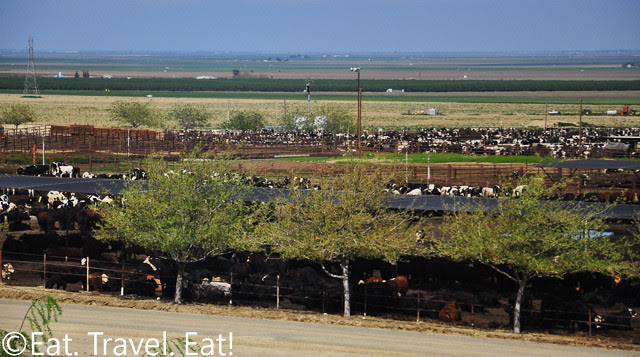 What is not particularly exciting along the drive is passing by the cow farms; the cows are amusing, but the stench that can accidentally flow into the vehicle if the air conditioning is not on "recirculate" or if the windows are open is extremely strong.

I really liked how the mountains are so "soft" in this picture; purple mountains can be seen after all! There were certainly some hints of purple, brown, and green when I looked from afar. 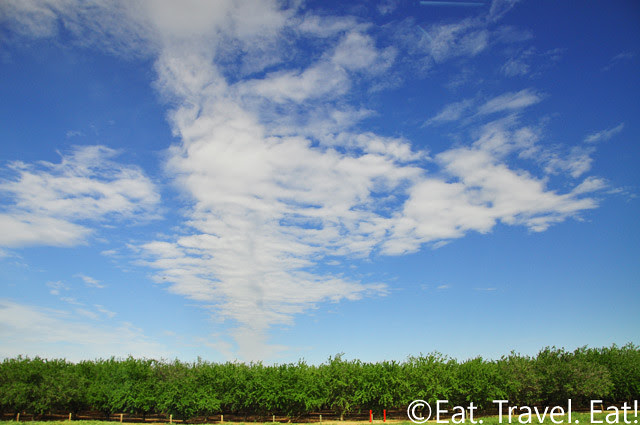 Here is yet another interesting cloud formation that looks like it is the path to somewhere. 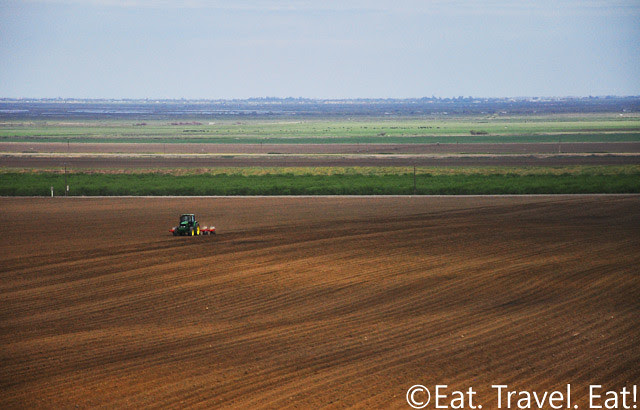 We passed by again another tractor, where the plowed land looked like smooth ocean waves. 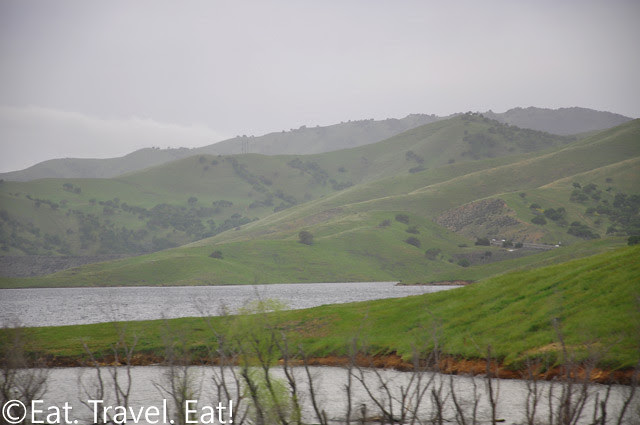 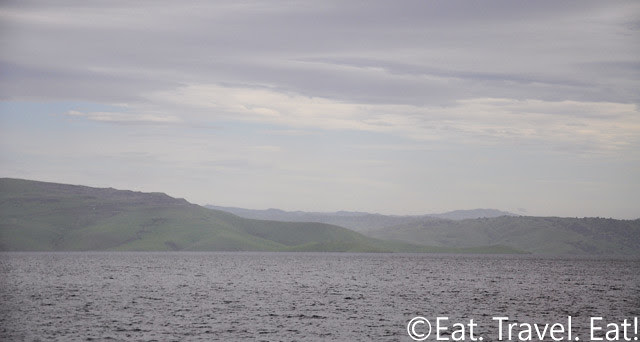 After a long drive on the 5 freeway, we switched to the State Route 152. The view suddenly changed; a large body of water welcomed us, and the curving route along with the lush greenery was something special to be driving on. 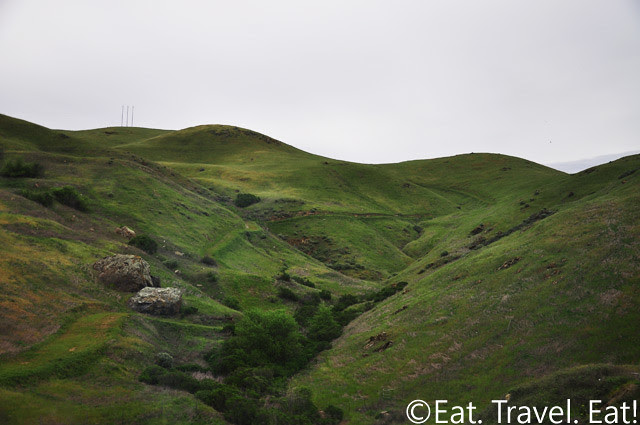 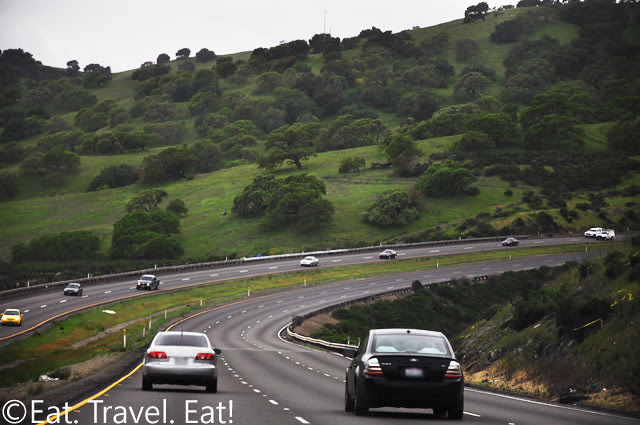 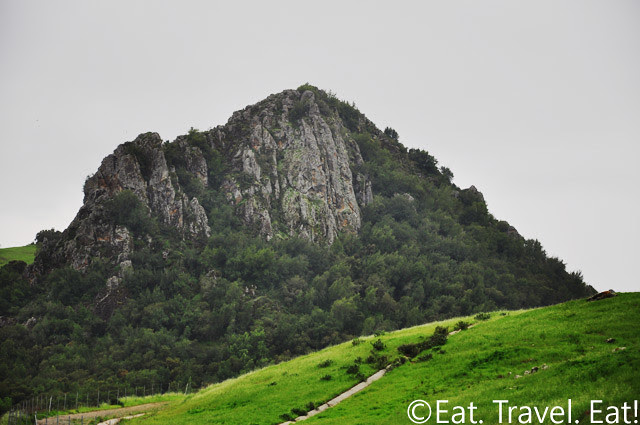 The deep green colors and curving roads remind me of British countryside, and the hill in the picture above is something that reminds me of China! We passed by such beautiful scenery we certainly did not mind the slower speed we had to drive at; it allowed us to have more time to savor the landscape. Large recreational areas were the main view for this section of the drive, but there was still some farmland; as we passed Gilroy, garlic aromas flowed into our vehicle for a short duration.

There are plenty of farm stands if you wish to purchase some produce, but virtually all of them were closed when we drove through. If you see one that is open, do stop by as you might not find any more farm stands on the route! 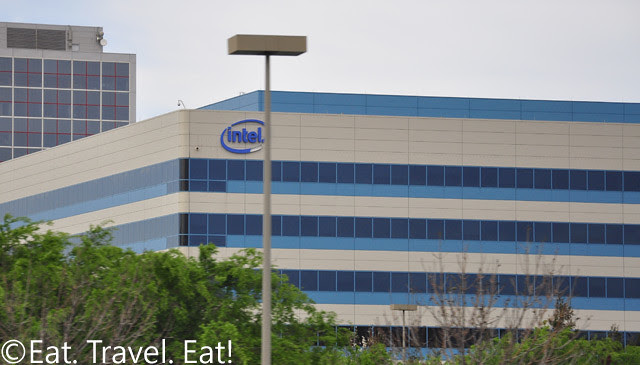 Soon enough, we were in the Silicon Valley. These buildings are quite a contrast to all the nature and farmland we saw just approximately a half hour before we arrived in this area. 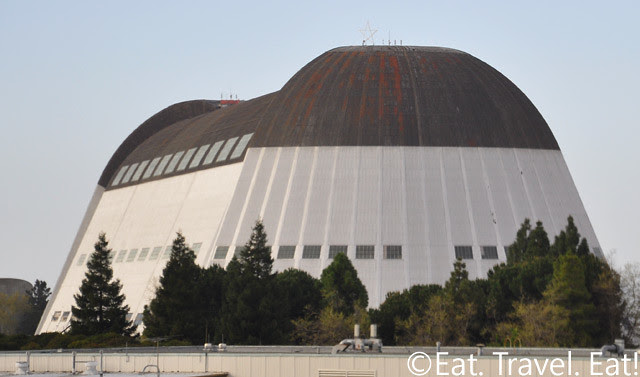 Like what I saw in Tustin, air stations with gigantic hangars still exist in other parts of California; this one is Moffett Field.
This six hour drive went by quite quickly! I guess it was probably because it was my first time going through. Koi Palace in Daly City, CA was our next stop.

imjustatree said…
hahah you make this drive look so interesting, but i dread doing it every time i go home from davis. beautiful pictures though. i've always wanted to stop and take some some along the way, but i (and my angry cat) also want to get the drive over as quickly as possible
September 11, 2011

LOL I think the first time is probably the best time; it's also nice during a cool day. Kettleman City is a good stop for chain food; In-N-Out, Starucks, Mcdonalds, and other places have stores there.
September 11, 2011