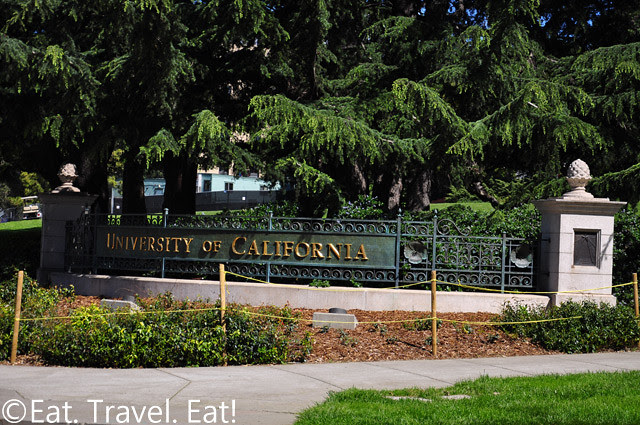 Our second full day in San Francisco started with a side trip to University of California- Berkeley. 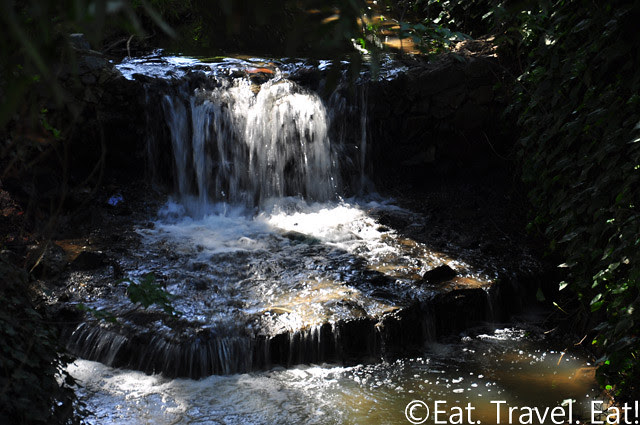 Stepping afoot on the west side of campus, our own self guided tour began by walking up the slope to Sather Tower. Had we known better, we would have entered the campus through its own parking lots, but instead a student employee told us to park in the public parking spots outside of campus and we followed his advice. 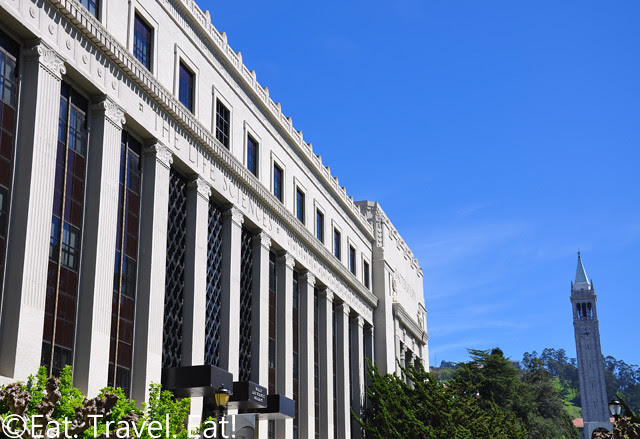 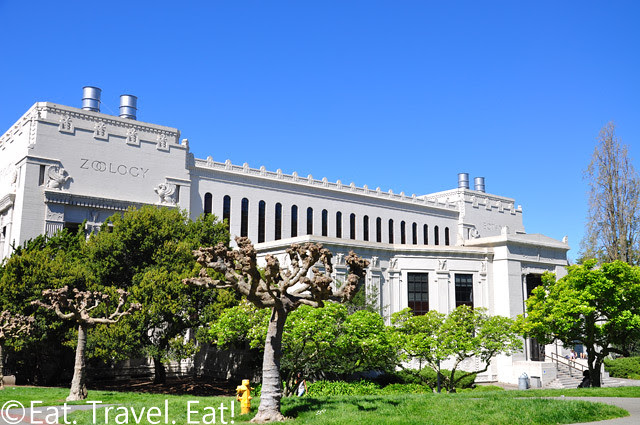 Walking up we were primarily met with buildings, like the Life Sciences building in the picture above, that probably were built near the beginning of Berkeley's existence; these buildings were really grand. Like the older buildings at Stanford, these buildings had many ornate details! 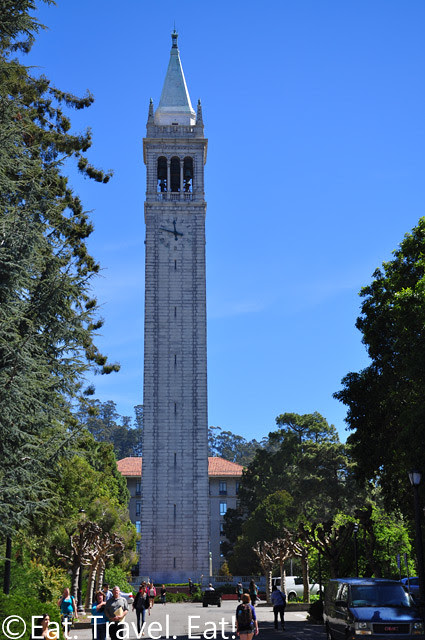 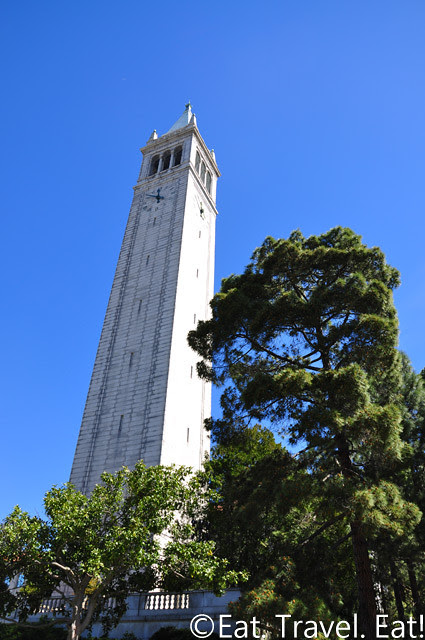 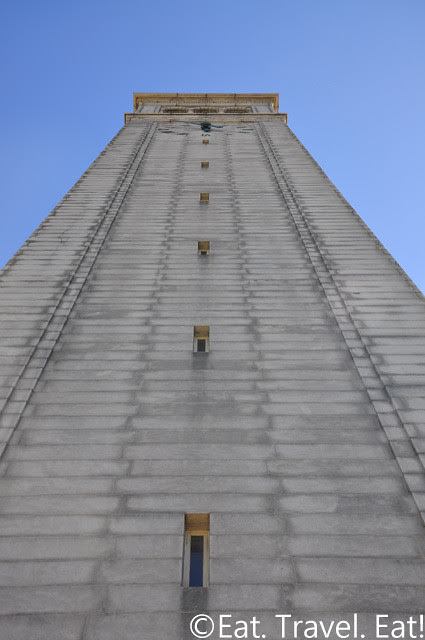 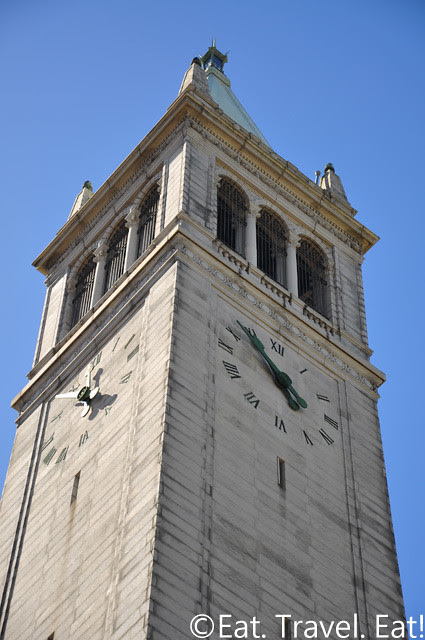 And soon enough, we reached Sather Tower. It's fun seeing how the perspective of a building changes as one gets close and closer to it! 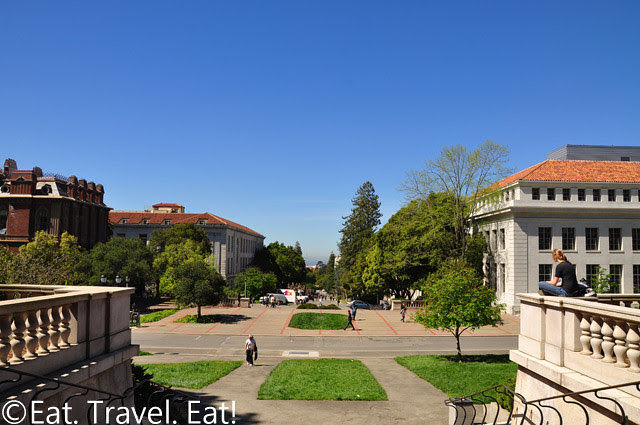 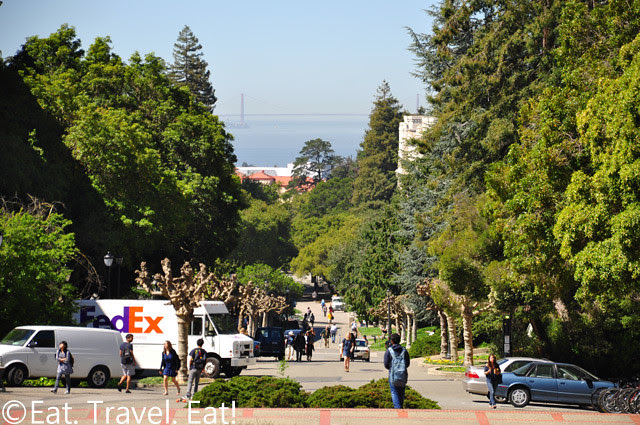 Reaching Sather Tower rewarded us with a picturesque view of the campus below, but also a view of the water. Not many students were out at this time, but that was because classes were still in session. 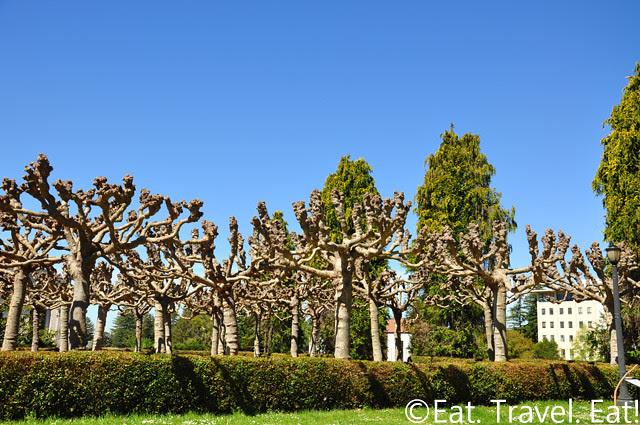 We continued to walk around the area, where were were met by a large group of trees. At this time of year (spring) it was interesting to see that these trees were pretty much bare. 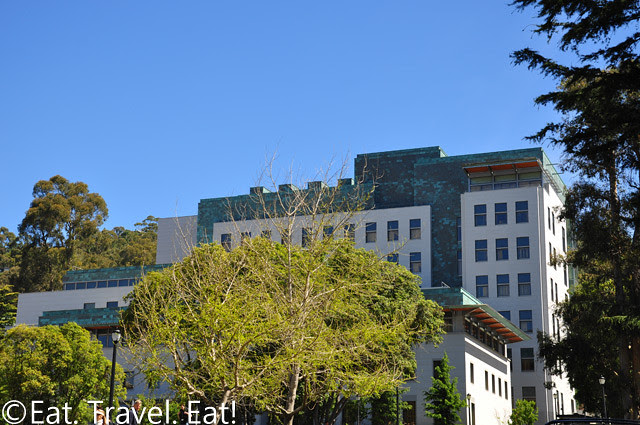 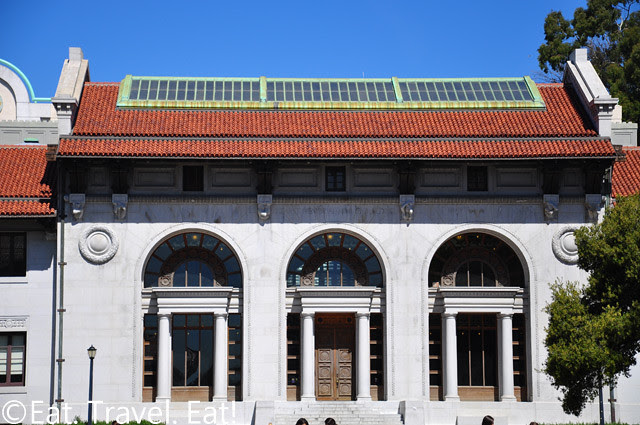 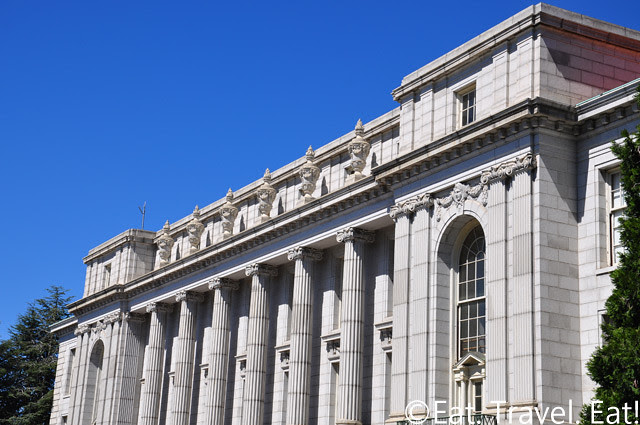 Nearby Sather Tower, the buildings certainly had more of a varied architecture. Some still had those ornate details, while others were decidedly modern. Still, all seemed to fit into the gray theme, accented with some rusty red and green. 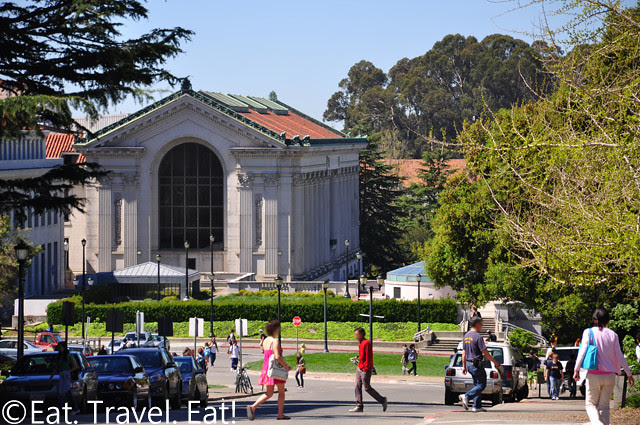 Class was out of session, and groups of students started to go out of the buildings. What was quite a calming atmosphere turned to a busy one; Sather Tower contributed to the busy movement, providing students and visitors a melodious piece of music which played for almost ten minutes! 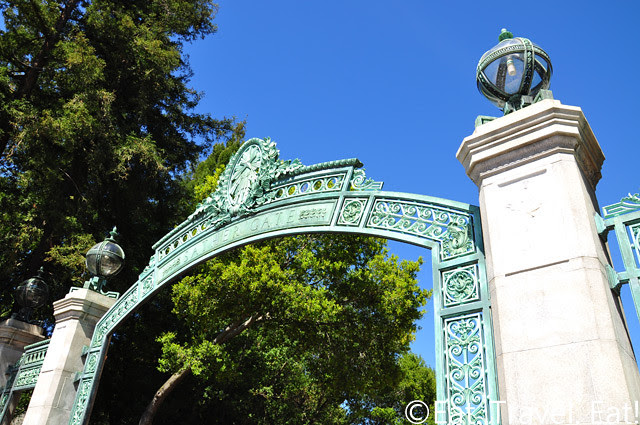 It seemed as if students were heading towards Sather Gate, and so we followed along. 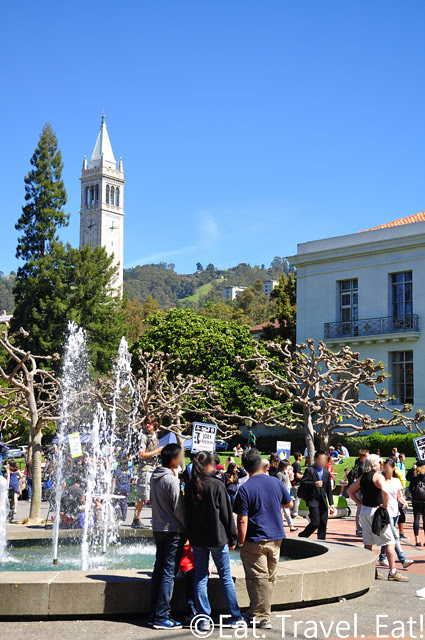 Campaigning for student council elections were happening, and it looked like as if a fair was taking place; various companies came by with booths sporting their products, and several groups of students danced at a makeshift stage at the footsteps of a building. Students were also busily eating lunch; instead of crowding along with them, we visited the bookstore, which like many other university bookstores, offered a wide selection of books, school supplies, computers, and apparel. 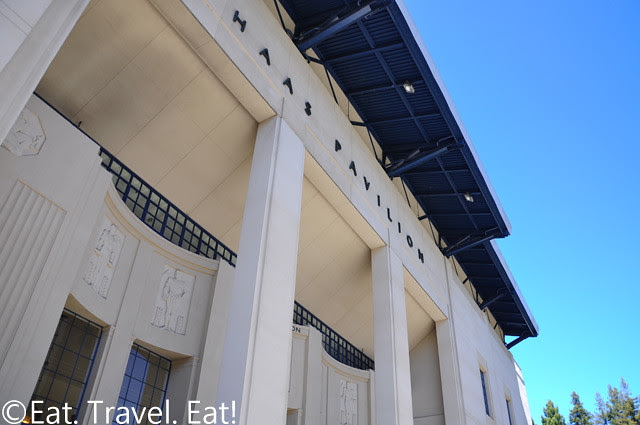 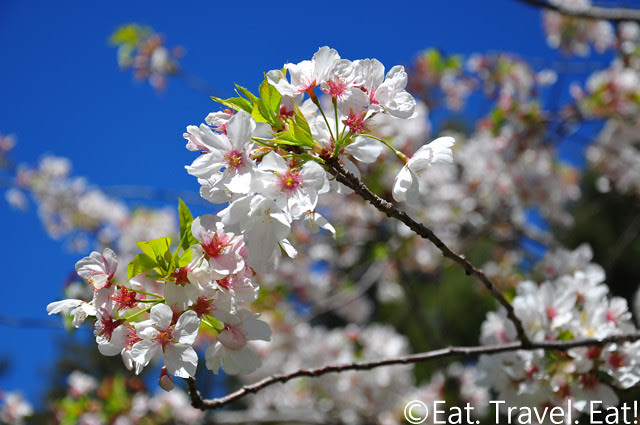 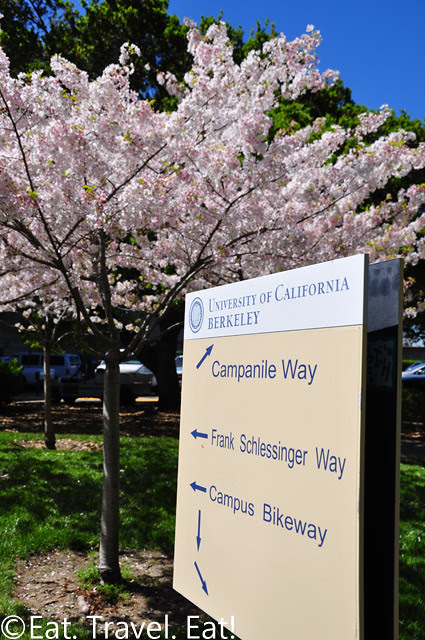 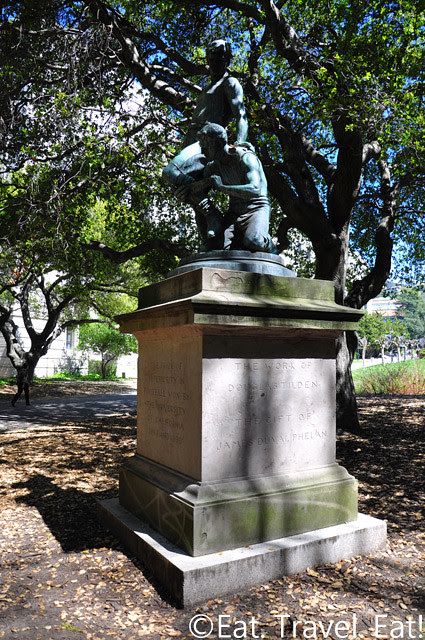 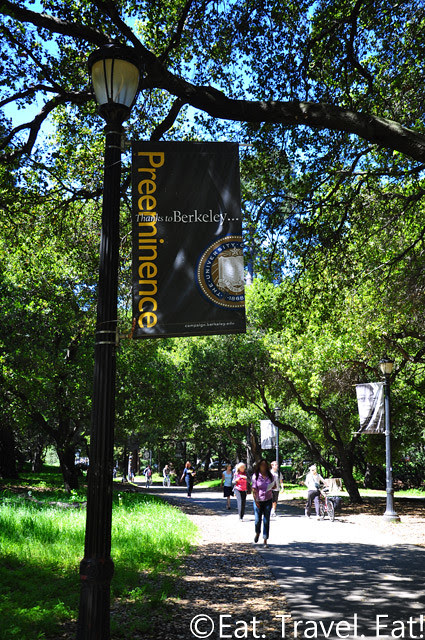 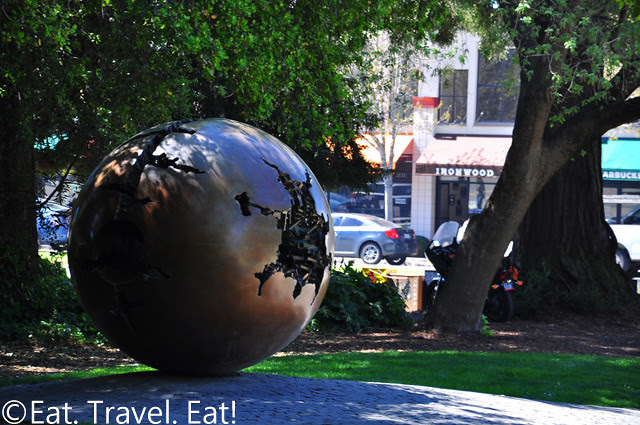 Our visit was short, but it was enjoyable walking through the many trees and taking a gander at college life on a day with classes.

Protocol Snow said…
When do you find out about college acceptances? Things have probably changed a lot since my college app days =P
December 17, 2011

EatTravelEat said…
Protocol Snow,
Some college acceptances for early decision/action were given out December 15. Regular decision usually is still around April.

Much has changed, and from what it looks like, they will get even more competitive in the years to come!
December 17, 2011