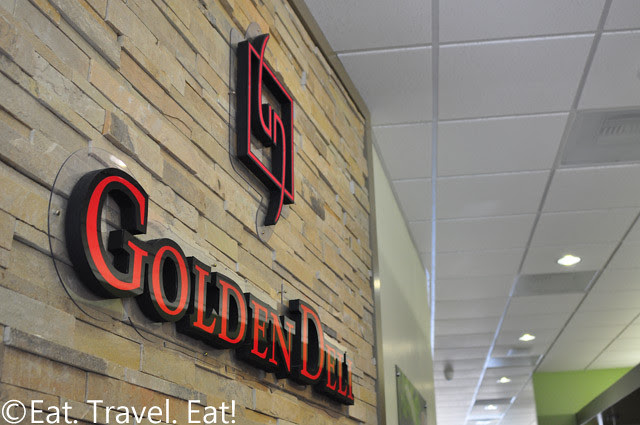 About a year ago, Golden Deli opened up in Temple City, replacing Alpha Science, an education center that has since relocated to Monrovia nearby Shanghai Bamboo House. We have been coming to this location ever since it opened, after having a good first experience and satisfactory return experiences. 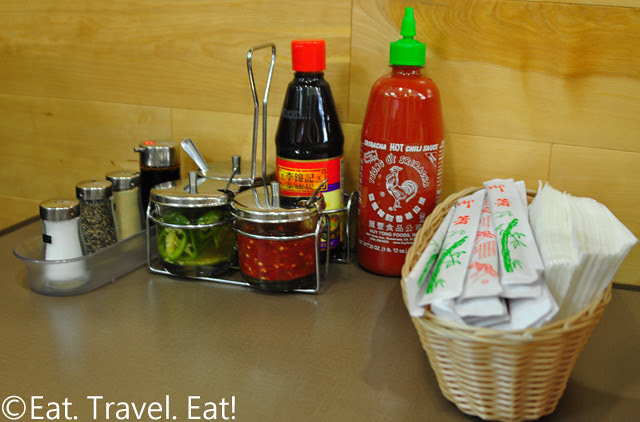 (Condiments and Utensils)
The restaurant actually runs quite similarly to that of a fast-casual restaurant (or "express style"); the customer gets to pick the table, holds the table number so that the employees can send over the food to the table, and gets to pick up drinks like tea, water, and soft drinks by themselves. Likewise, the interior is modern, like those of fast-casual restaurants. However, I find the food quality similar, if not the same, to that of the Golden Deli in San Gabriel; management seems to agree, having stripped the "express" part from the restaurant name.

This fast-casual aspect makes Golden Deli a great place for newcomers to try Vietnamese cuisine, as the environment and music (instrumental forms of popular music) are unpretentious while the food is authentic. The glass menu, fastened on the wall, is actually written in English and minimal Vietnamese. Laminated menus at the table counter, however, offer better insight into the restaurant offerings. 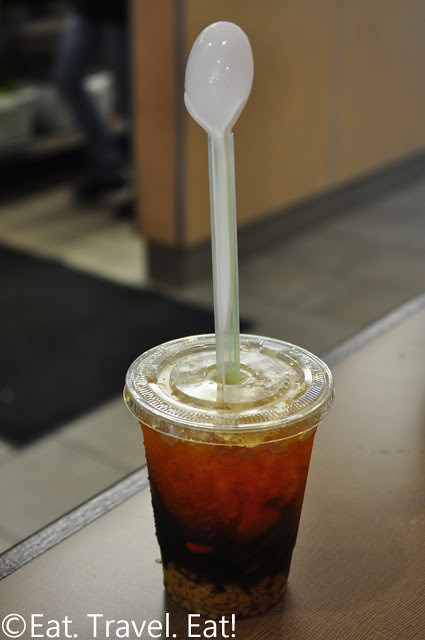 Drinks, unlike those at the original location, are served in plastic cups. The Xam Bo Luong (2.50 USD) is one of the drinks we usually order at Vietnamese restaurants; this version offers plenty of dried longan, pearl barley, kelp, and other ingredients in a sweet liquid and crushed ice.

Hot tea, hot water, and chilled water are offered as complimentary items; just serve yourself at the counter. 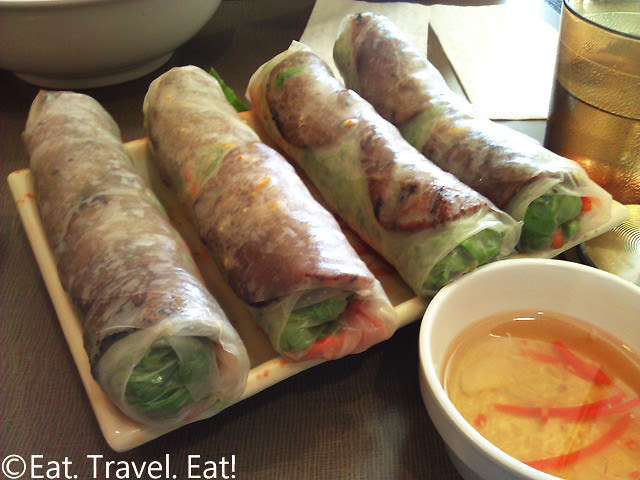 Golden Deli's spring rolls (3.75USD for two spring rolls) are filled primarily with herbs and lettuce. I, however, prefer some more rice noodles and carrots in my spring rolls. 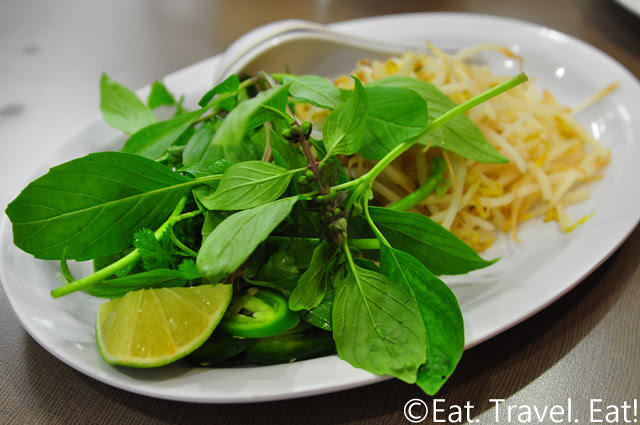 Perhaps because the restaurant is slightly geared towards a less traditional approach, the types of herbs offered in the plates that come with the noodle soups are limited. Thai basil and cilantro appear to be the usual herbs that are offered, along with the usual lime, jalepeno pepper, and bean sprouts. Blanched bean sprouts (as seen in the picture) are given upon request; just ask the employee when ordering. Likewise, ask the servers for additional amounts of anything on the above plate, like lime, if necessary. 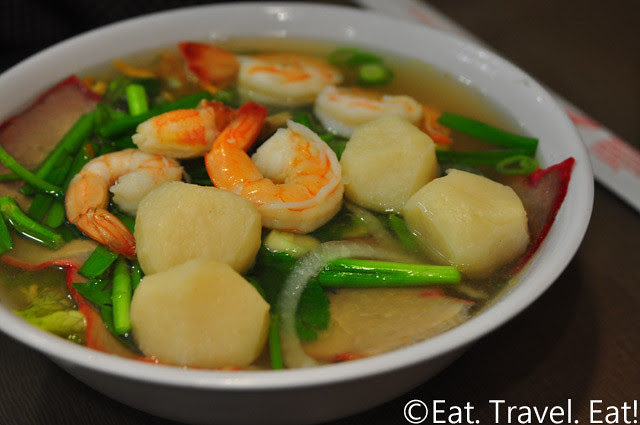 The Temple City location is special in that it also offers "today's specials," or items that are not on the regular menu. These may be items that may go onto the menu depending on customer satisfaction. During summar, this above bowl of soup, which had rice noodles, char siu, shrimp, and fishballs in a fried shallot accented broth, was the special. During my more recent visits, ribeye pho and a tofu noodle dish have been the specials. 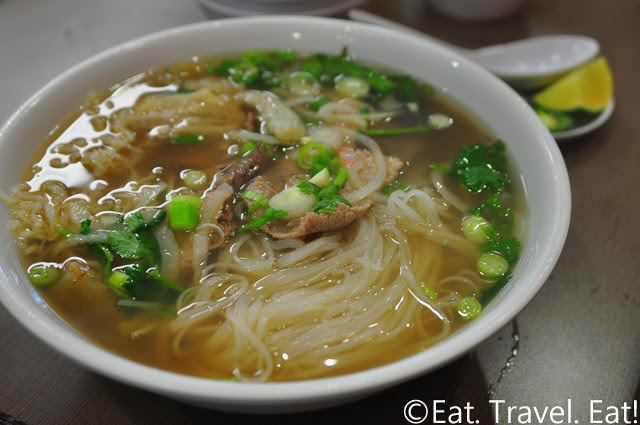 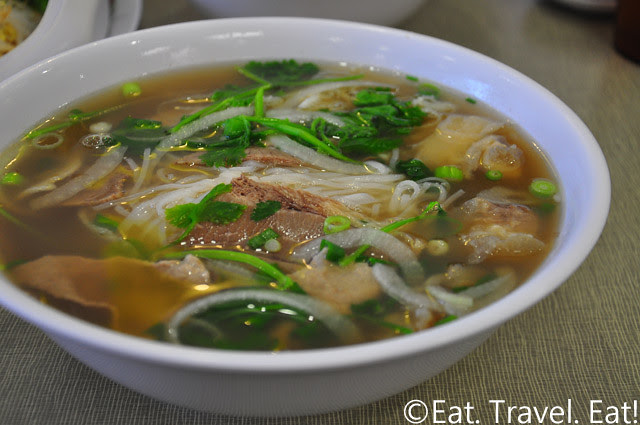 Speaking about pho, my companions and I usually order the first item on the pho list on the laminated menu, the pho dac biet (6.50 USD). Along with the broth and rice noodles, it comes with both rare and well cooked beef, tendon, and tripe with onions, green onions, and cilantro for garnish. Golden Deli has been pretty consistent with its broth; I find it to taste similar every time I visit. However, I find that during lunch, the broth usually tastes better than it does during dinner. The broth seems to be fresher, with a more distinct flavor during lunch. I do find the broth at the Temple City location to be lighter in flavor; the color, compared to the San Gabriel location's broth (click here for a photo) is lighter as well.


Another slight problem is that the rare beef usually comes cooked by the time it arrives at the table, since the broth is ladeled over the rare slices of beef. I also would prefer that the bowl not be made out of melamine or plastic, but that is another issue altogether. Nevertheless, we still order pho quite often here, as it offers the strongest rendition in the area (in our opinion). The broth has enough flavor to be enjoyed for the whole entire bowl, and is not muddy; the other beef parts are of good quality, and the noodles are suitably chewy (and get softer as they soak in the broth). 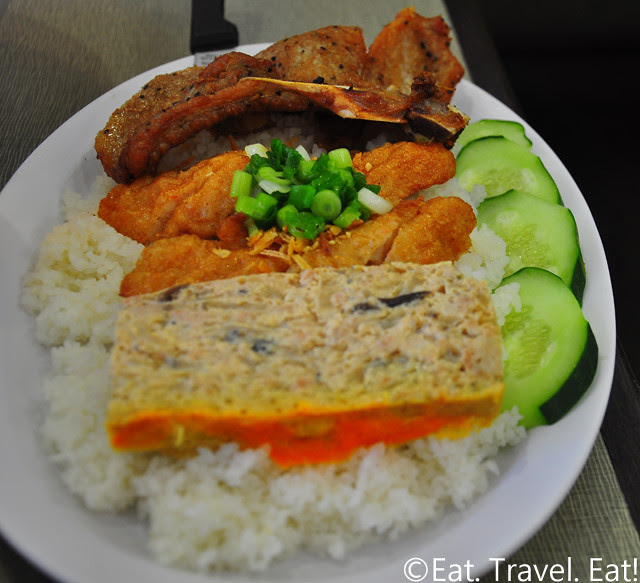 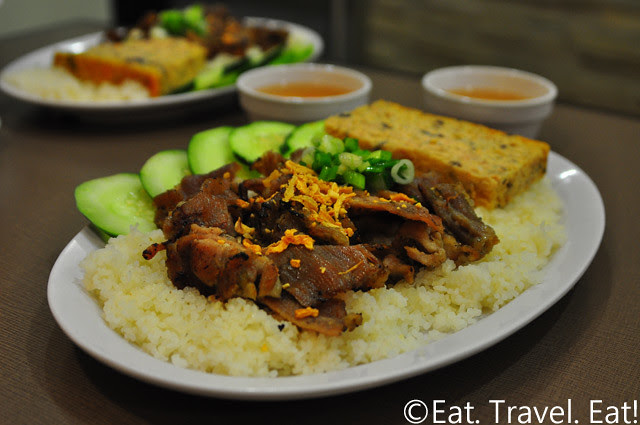 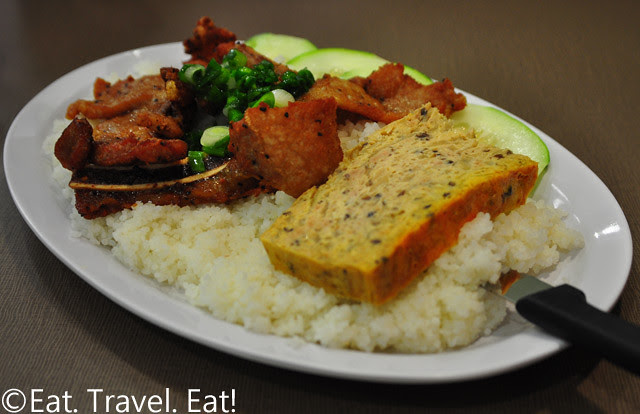 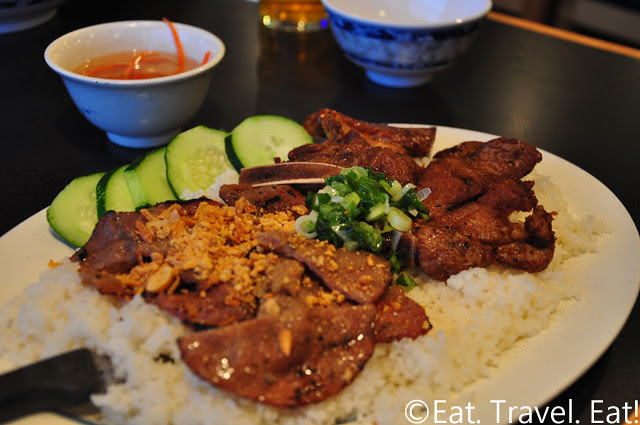 (For comparison, a rice plate from the original San Gabriel location)
I tend to order the pork chop now instead of the grilled items, as the grilled items tend to have charred edges (but have good flavor otherwise). The pork chop is fried, crispy on the outside and tender on the inside, with plenty of lemongrass flavor. The baked egg we order every time, as it is a great rendition: tender, with plenty of soft vegetables and meat dispersed in the egg. I wish there were more vegetables included in these plates, but other than the green onion, cucumber, julienne carrots in the nuoc mam cham (sweetened fish sauce), beef and onion stir fry option, and vegetables in the baked egg/egg rolls, the rice plates do not offer much in terms of vegetables.

And about the shrimp paste: It is very tasty; bouncy and not fishy, but doesn't contain the sugarcane as it purportedly has as shown on Food Network's "The Best Thing I Ever Ate." I also do not care for how the shrimp paste is steamed in plastic wrap. 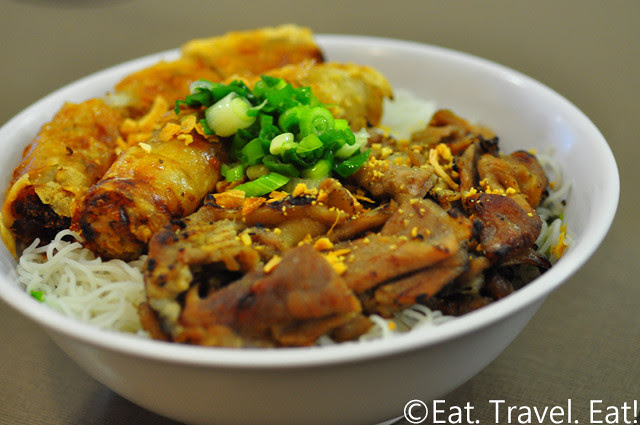 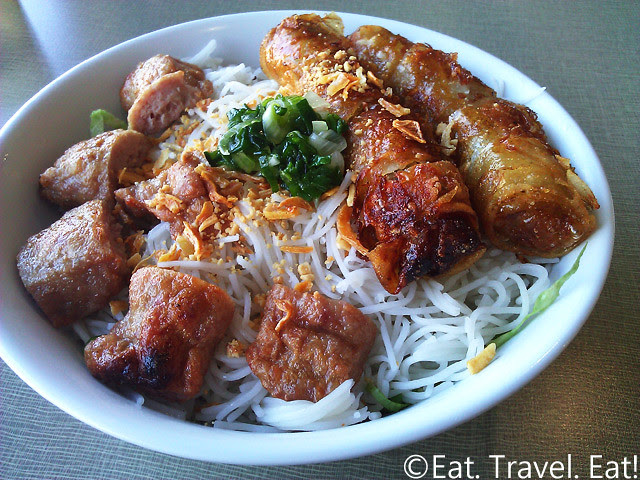 Instead of ordering the rice plates, which tend to come with little vegetables, I now tend to order the bun, or rice vermicelli items, which have plenty of bean sprouts and lettuce. Pork meatballs (nem nuong, grilled chicken, grilled pork and beef, shrimp paste, beef and onion, and egg rolls are offered as toppings for the rice vermicelli. The pork meatballs are tasty and bouncy, and do not have that heavy red/pink tint that the supermarket versions have. The egg rolls have that crisp, crackly outer skin, while also being chewy from the rice paper that is not fully exposed to the oil; as for the filling, it is peppery, with plenty of meat and veggie. I like these items primarily for the balance of vegetable and meat; some may find the meat amount to be little, but ordering the grilled chicken solves that problem. My order of grilled chicken with the rice vermicelli had plenty of chicken pieces, but the chicken did not taste as fresh as the other items. 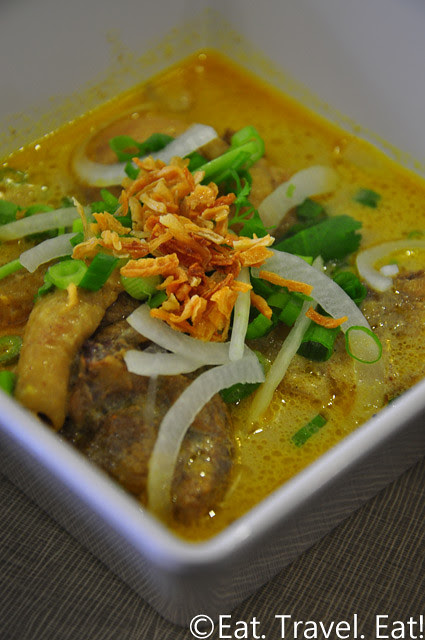 As for the curry chicken, it is just like the original location's curry: extremely soft, tender chicken in a curry sauce that has plenty of coconut milk. The bowl is just decidedly modern. 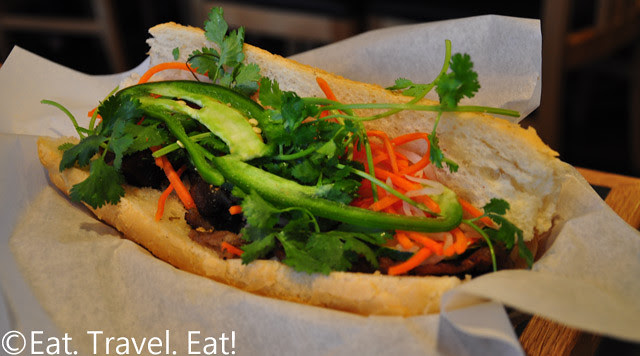 Likewise, the banh mi sandwiches offered at the Temple City location are so similar to those offered at the original that even the presentation and taste are the same.
Golden Deli offers a wide variety of items on its menu, and I have yet to try some of the other items. If you happen to be in the area or find the original San Gabriel location to be crowded, driving to Temple City to this Golden Deli is a good option, as the waiting time is short and the food and service similar to that of the original. There may be items that are missing from the San Gabriel location's menu, but for the most part, Golden Deli in Temple City is a solid recreation of the original with a cleaner, brighter, and more modern atmosphere and convenience offered by the fast-casual concept. (be sure to tip afterwards)

See my review of the original San Gabriel location HERE.

KirkK said…
Hey ETE - Nice photos! BTW, you can request to get the "Tai" on the side, then add them to the (hopefully) very hot broth yourself.
February 07, 2012

Thanks! That would be a much better idea; the broth is pretty hot, which makes me worried about the melamine bowls (then again, we don't know the serving temperature of the broth).
February 11, 2012

Ashley said…
Hey Wilson, it's Ashley from Pow Wow. I just got linked to your blog through Google Images, super cool! :D
October 10, 2012