A recent trip brought us to the St Regis Monarch Beach, where the room rate included a voucher for breakfast. After a night's rest, we went downstairs to check out the offerings. 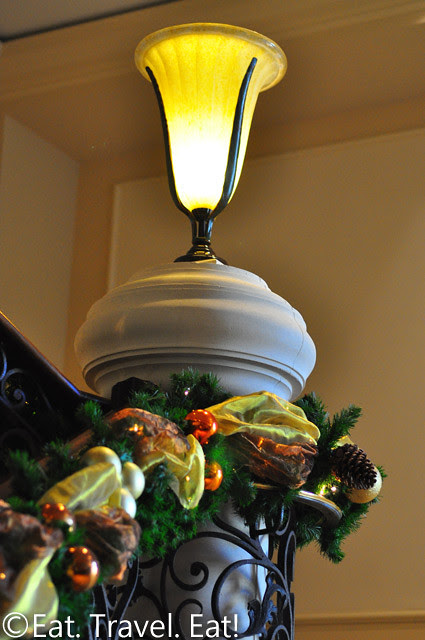 Reaching Motif requires a stroll down a flight of stairs. During our visit, the staircase, as well as the rest of the property, was adorned with decorations for the holiday seasons. 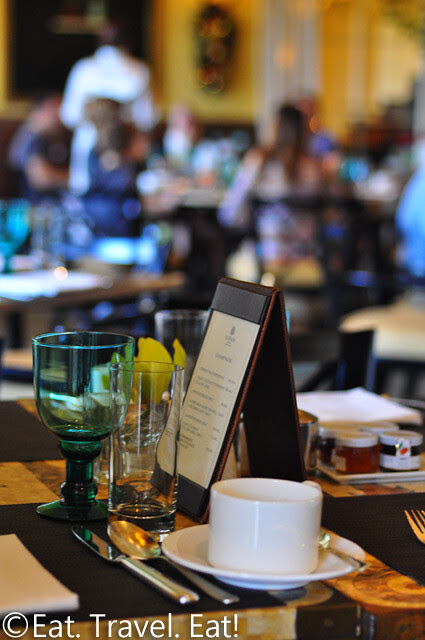 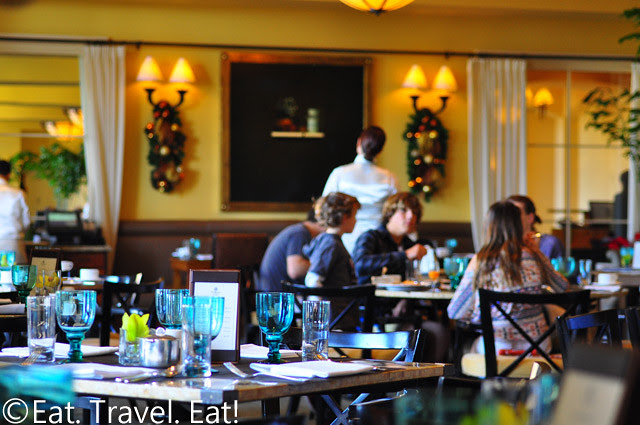 Motif's interior likewise was adorned with the holiday decorations. Like the rest of the hotel, the decorations added a pleasant touch of color. I find the blue glasses a nice touch to the restaurant. 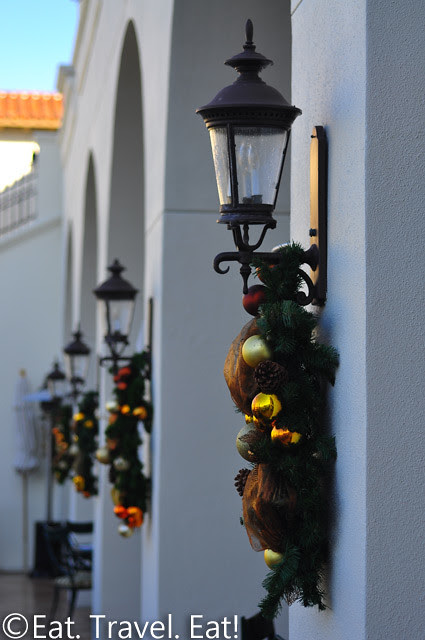 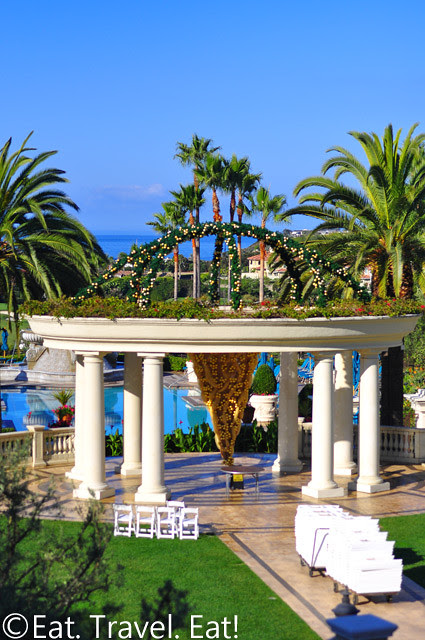 Motif, being located in the center of the hotel, offers a great view of the pool, golf course, and ocean. This view is great to begin the day. 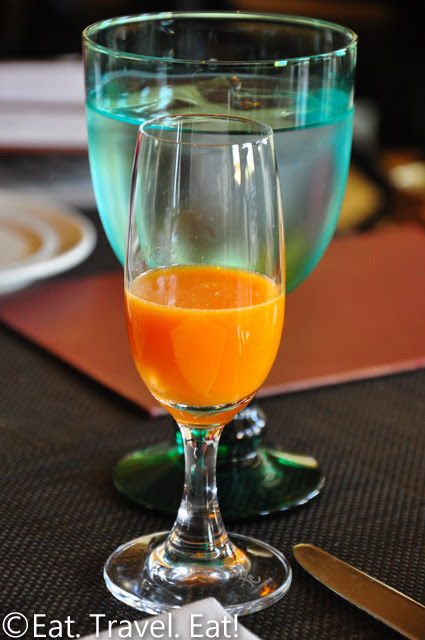 Our dining experience paralleled with the well thought-out details of the St. Regis. After being seated, a waiter treated us to a tasting of some raspberry orange juice and also offered us coffee, which was bold and smooth.

We were there quite early (around 6) and so only the regular breakfast menu was available. 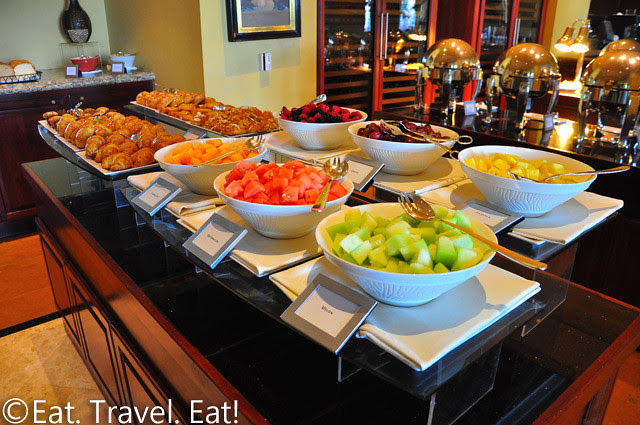 However, we decided to wait for the breakfast buffet to start. The breakfast buffet not only offered most of the items on the breakfast menu, but also included juice in the price. Some items on the buffet tables include fruits, pastries, scrambled eggs, bacon, sausage, potatoes, eggs benedict, french toast, pancakes, waffles, cereals, and bagels. Yes, most of these items are items which you can get in most other buffets--not much out of the ordinary-- but these items were all of great quality and tasted well.

My first plate consisted of items available at the inside of the buffet, namely roasted potatoes, pineapples, berries, a sausage, eggs benedict, and bagel toppings of smoked salmon, sliced onions, and tomatoes. The eggs benedict was delicious, with a tangy and smooth hollandaise sauce, tender english muffin, perfectly poached egg, and thick slice of ham. All the other items were decent; I piled up on the variety off cut fruit for my later plates as they were fresh and tasty. 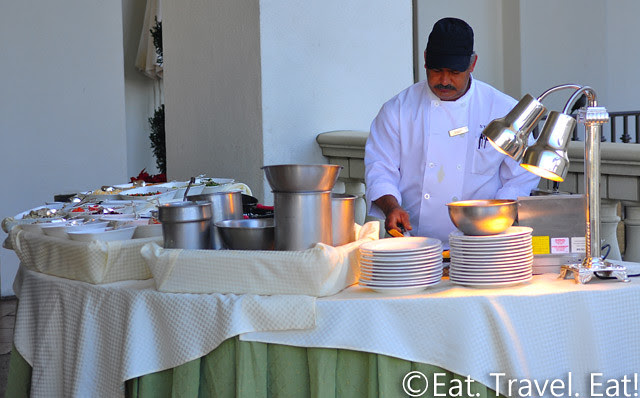 There was more to the breakfast buffet though: a live cooking station was to be found just at the door to the patio! This cooking station not only offered an elaborate cooked-to-order egg selection, but also waffles and pancakes. Omelet toppings were plenty, ranging from the usual vegetables to more less seen ingredients in omelets, such as artichokes, guacamole, shrimp, and smoked salmon. 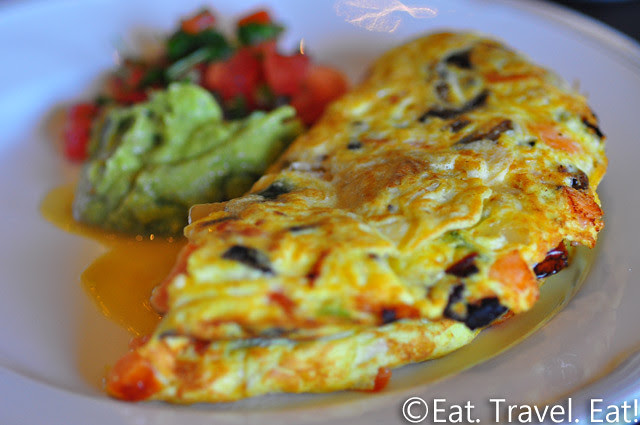 I composed a omelette that consisted of mushrooms, tomatoes, roasted red peppers, green bell pepper, artichokes, and smoked salmon; on the side, I placed some pico de gallo and guacamole. It was a decent omelet; the combination of ingredients I selected was not ideal tastewise but was cooked properly. As for the guacamole, citrus flavored altered the otherwise unadulterated creaminess of the avocado and spiciness of cubed peppers. 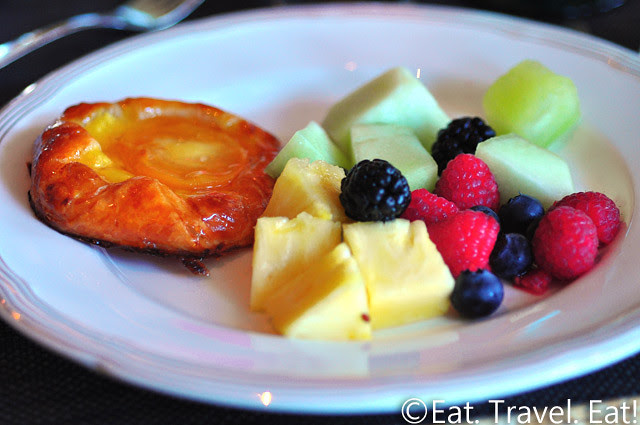 My buffet journey continued with a plate of fruits and an apricot pastry.  The apricot pastry was quite delightful-- a sweet glaze covered the pastry, while the center of the pastry contained a sweet cheese mixture and tangy apricot. 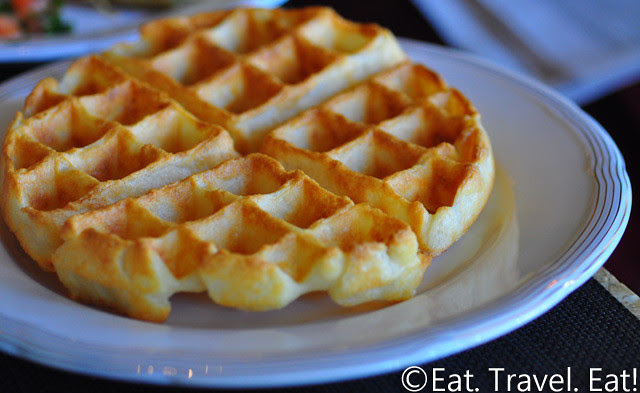 Since I wanted to get a taste of most of the items at the buffet, I shared a freshly made belgian waffle with my companions. This waffle was crisp on the outside and chewy on the inside, and was fantastic with the flower honey provided at the table. 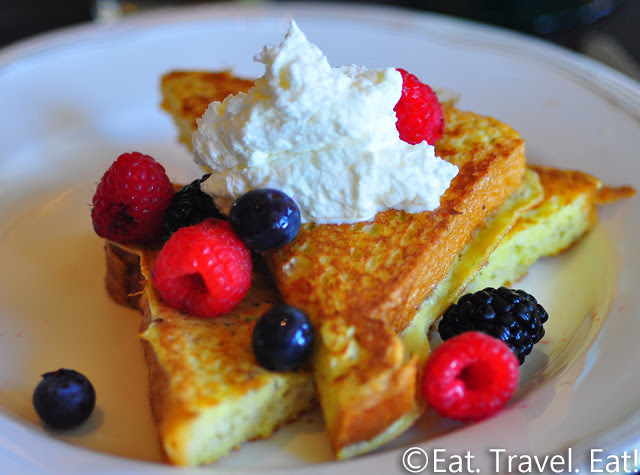 I also decided to style an entree dish. Here are two pieces of french toast with whipped cream and berries placed on top. The french toast was nothing spectacular (and needed additional flavors from condiments) but the fact that whipped cream was available as one of the toppings is something that I have not seen from hotel restaurants of a a similar caliber. 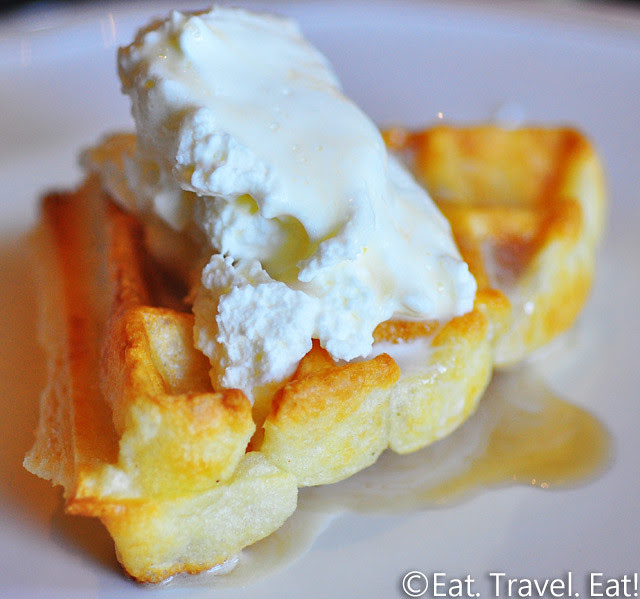 To end the meal, I took a quarter of a waffle (from the main line-- freshly cooked waffles were cut and placed at the buffet line for those who did not want an entire waffle) and doused it with hot pancake syrup and a dollop of whipped cream.

The breakfast buffet at Motif was of a higher scale, with a reasonable price for the caliber. We enjoyed our experience--not only was the food of a high quality, the detail to service made the experience memorable.

Selba said…
Hi there, it's been awhile since my last visit to this blog. Good to know that you are still blogging :) I have your blog link in my reader but I can't read it from there. These days, I hardly put comments and the easiest way to read blogs is from my google reader.
June 25, 2012

It's been a while since I visited your blog also. I've adjusted the settings so that you should be able to read it in your reader now. :D Tell me if it works or not!

Selba said…
Just check out my google reader. Well, now, your blog is not only the title like before but each post got some "extra" advertisements plus one first paragraph and the rest, as you wrote, it's only a summary and need to visit your blog for full links/content ;)
June 25, 2012