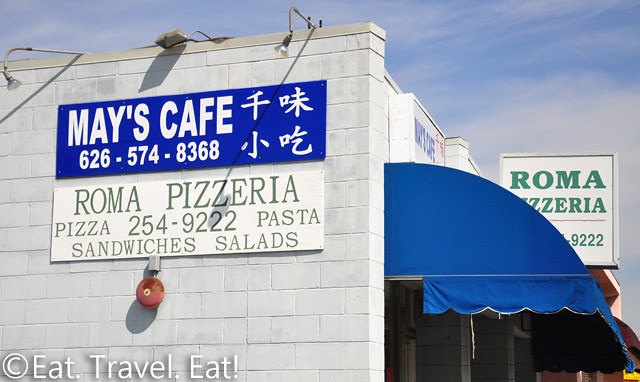 (Now that I've eaten a generous serving of AP Tots (the reason for my month's absence), I'm back to writing on a weekly basis!)

For years, I have wondered what was this "May's Chinese Restaurant" entry on my GPS; how could there be a restaurant in Arcadia that I did not still know about? It was only recently that I found out it was May's Cafe, an establishment that has been in Arcadia for years. With some special circumstances that began this year, May's Cafe suddenly became a restaurant with a prime location-- one ideal for me to try out their Taiwanese selections from a walking distance. 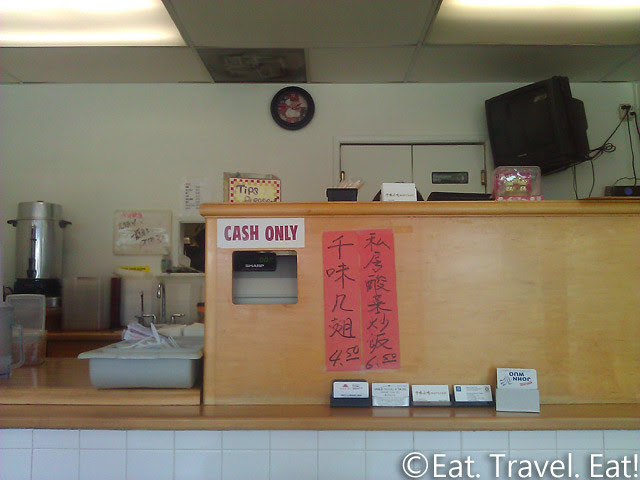 Inside, the restaurant is tiny-- there are less than 20 tables, and mirrors are used in an effort to enlarge the space. Still, the less than perfect surroundings, coupled with some KOST 103.5 radio and view of the street, add for a unusually relaxing way to end an otherwise busy week. The constant use of Mandarin may present a barrier for some, but eventually orders get through, and food is served. 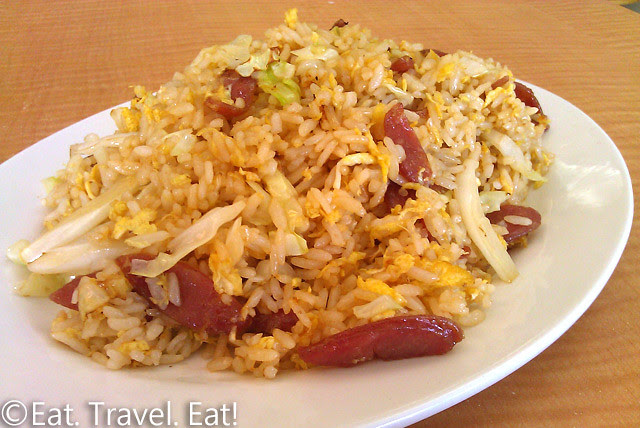 On my first visit, not knowing what to really order and not really knowing how to say the Mandarin names of some items, I kept to observing the food served to other patrons and what I knew in words, and ordered the Chinese Sausage Fried Rice (6.00 USD). In comparison to some of the ginormous plates of food presented to some of the patrons, this serving of fried rice was comparatively tiny. The fat granules of rice, fragrant sausage, crisp lettuce, and wispy strands of egg were enjoyable, if a bit greasy and salty.  MSG was also added, and so I noted that for future visits I would ask them to exclude that ingredient. 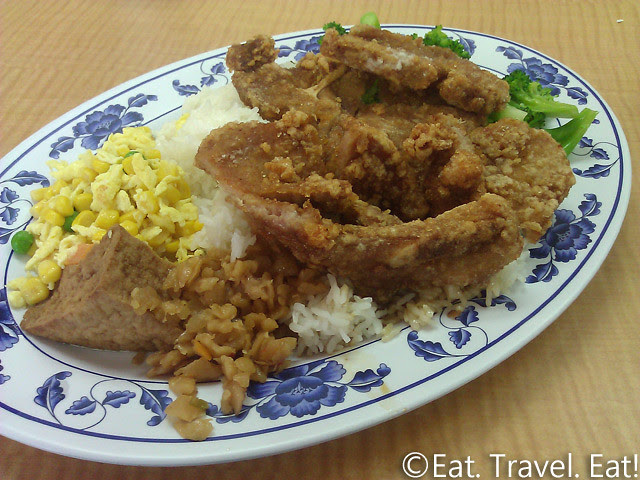 Now armed with the experience of eating at May's Cafe for once, I went into May's Cafe the second time ordering what most people ordered while at the cafe: Fried Pork Chop on Rice (6.00 USD). For the same price as the Fried rice, I got a large, balanced meal of protein, carbohydrates, and veggies. Along with the centerpiece of fried pork chop, there was a bed of steamed white rice, doused with a scoop of soy, and to the side was a generous serving of broccoli with bonito accents, scrambled egg, stewed tofu, and preserved turnip. The pork chop was crisp, light, and most importantly tender; and in such generous servings, I left this time quite full. 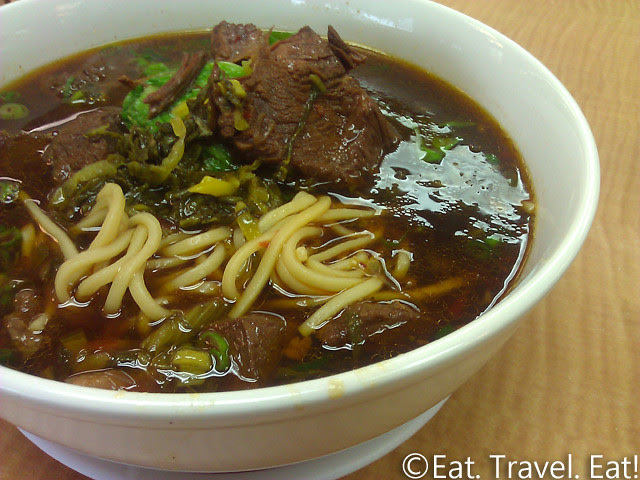 On my third visit, I tried out another of May's Cafe's greatest hits: Beef Stew Noodles Soup (6.00 USD). In comparison to my usual favorite, this version offered a bold, intense broth, high quality pieces of stewed beef, and some additions--napa cabbage and homemade preserved vegetables. I didn't care so much that the broth was quite greasy on top, and that the noodles did not offer much other than a toothsome chew, but with subsequent visits the broth has been less greasy-- the manager probably noticed how I was skimming the broth's surface several times before I started enjoying the bowl of soup. My companions feel this bowl of noodle soup is just as good, if not as better, than our favorite; then again, both are quite different in terms of the broth, and your opinion will differ depending on whether you like bolder flavor items (in which May's Cafe certainly wins) or lighter flavored items (House of Mandarin Noodle is the clear winner hear). 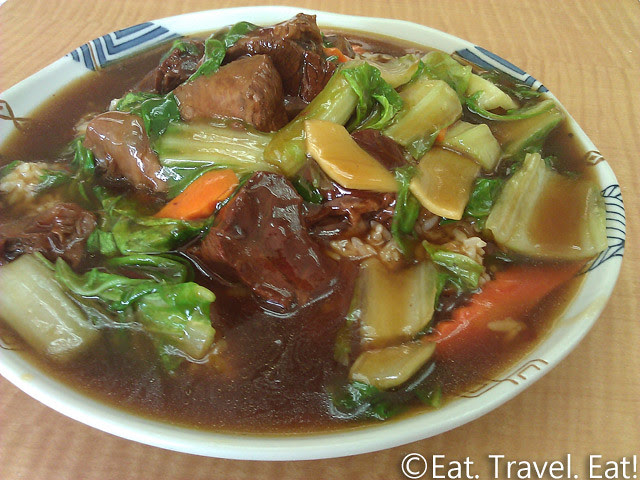 Having tried the Beef Stew Noodles Soup, I was now determined to try out the Beef Stew on Rice (6.00 USD). What came to the plate was essentially the same dish, other than noodles were subbed with a bed of steamed rice, and the broth became a cornstarch thickened sauce with some additional seasoning. Although I certainly enjoyed the meaty pieces of stewed beef, I felt that there was too little rice to suit with the generous serving of sauce, and the plastic spoon was sharp enough to make a slight cut on the mouth. So, a suggestion: if you don't care for eating on plastic soup spoons, bring your own utensils! 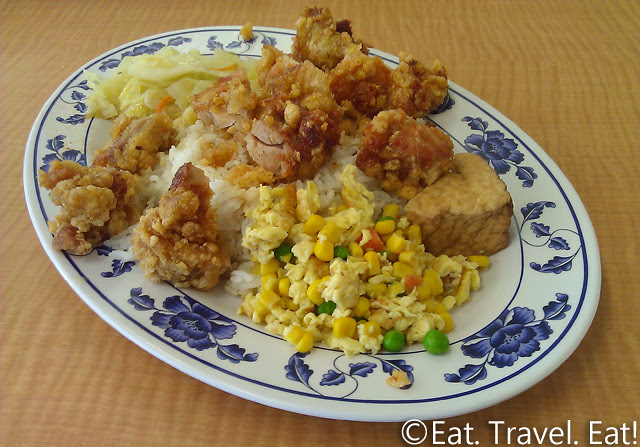 Another visit, I tried the Fried Chicken Leg on Rice (6.00 USD). The restaurant was certainly busier, having school been released at the same time I went to the cafe, and my plate seemed to have the inconsistency of lacking the spoonful of preserved vegetables. The chicken leg, like the pork chop, was light, juicy, crispy, and simply seasoned-- no special final dusting of five spice or chili powder to be found here. The cabbage was decent, but I definitely preferred the broccoli more. 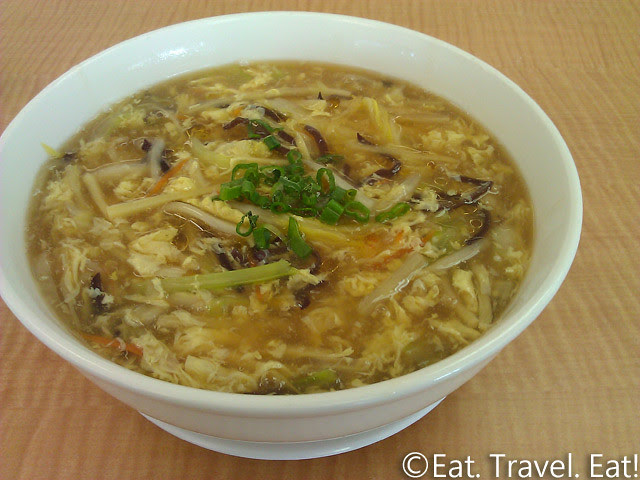 Having tried the "Da Lu Mian" at Mandarin Noodle Deli, I decided to try out May's Cafe version. Like the other items I've described so far, this item, the Simmered Pork Noodles Soup is also 6.00 USD. I enjoyed the wide variety of ingredients found in the noodle soup-- bamboo shoots, wood ear fungus, carrots, celery, and napa cabbage-- and unlike some of the other items I've had at May's Cafe, this item came out almost immediately after I ordered it. Seasoned with sesame oil, the broth was slightly out of the ordinary, but still pleasant. 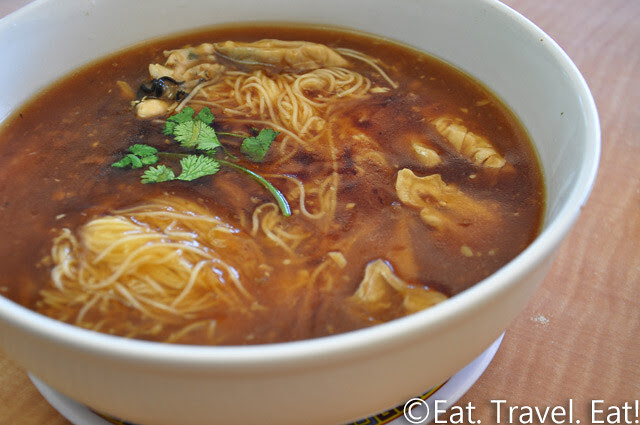 Wanting to try some more traditional Taiwanese items, I ordered the Intestines & Oysters with Tiny Noodles Soup. This one was a pungent dish-- mixed inside the bold broth was minced garlic, and placed atop was a dash of black vinegar. The noodles, slightly clumped, needed a slight mix before enjoying; on the other hand, the intestines were tasty, with little foul flavor, and the small pieces of oyster were savored. In this occasion, I felt again that there could be more strands of noodles, as there was plenty of broth to go around. 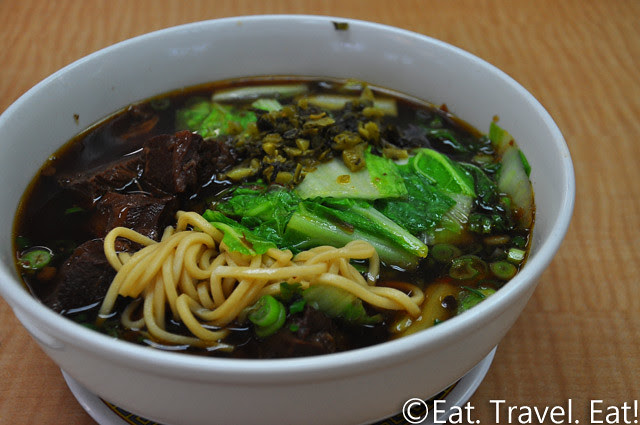 On a rainy day, the Beef Stew Noodles Soup sounded like a good idea, and so I certainly enjoyed this bowl. And look! Little grease on the surface of the soup! Unfortunately, the stuff that I brought to the restaurant got wet in the rain after a ten minute walk-- always keep your items in a waterproof housing! 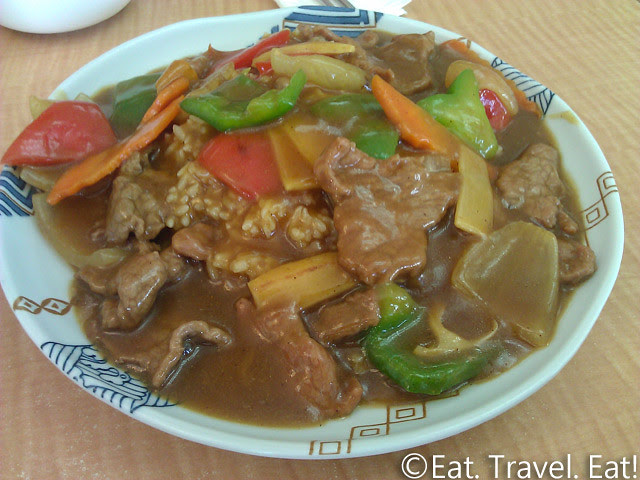 On a better day, a companion and I visited May's Cafe yet again. My companion ordered the Curry Beef on Rice (6.00 USD) but did not care much for it, as there was very little curry powder actually added to the sauce. Instead, it tasted more like a brown sauce instead of a curry sauce. We did, however, like that a wide variety of vegetables was added to the curry. 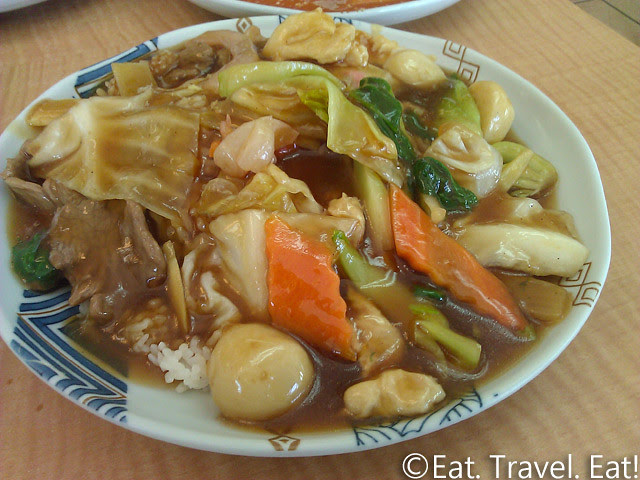 I tried out the Combination on Rice (squid, chicken, beef and vegetables- 6.00USD). In addition to what the menu describes, there were some pieces of fishball, fishcake, and octopus (that tasted weird) to the mix. Other than one awkward ingredient in the combination, the rest of the dish was tasty. 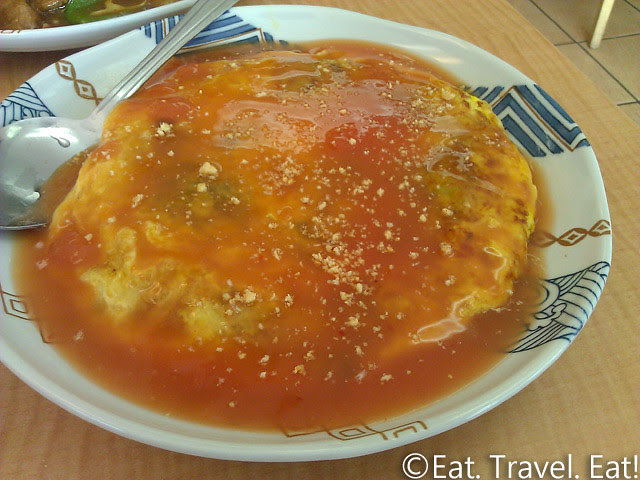 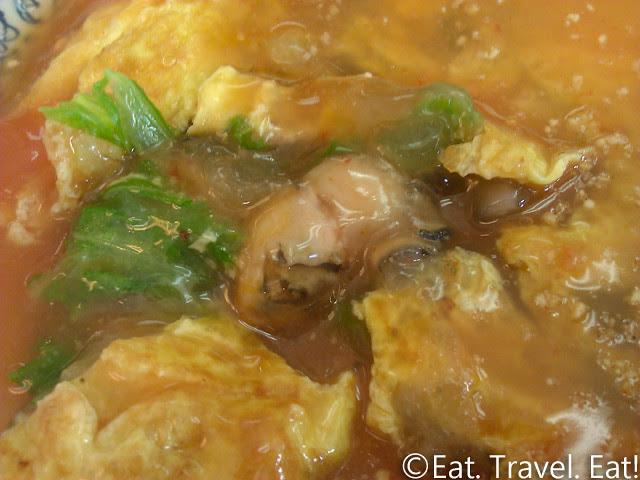 We also ordered the Eggs & Oyster's Patti (5.50 USD), essentially a Taiwanese oyster omelet.This version was quite special in that the starch, oysters, and vegetables were fully encapsulated in a thin layer of egg, while the oysters were still barely cooked and the veggies crisp. It was an intriguing version of the oyster omelet, and had the accompanying sauce been warmed up (it was somewhat cold) I would have liked it even better. 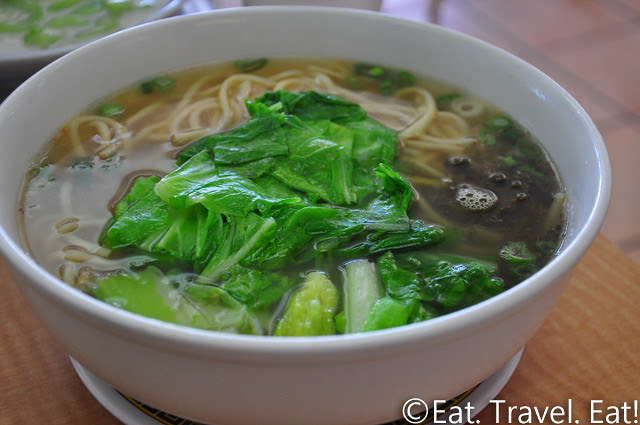 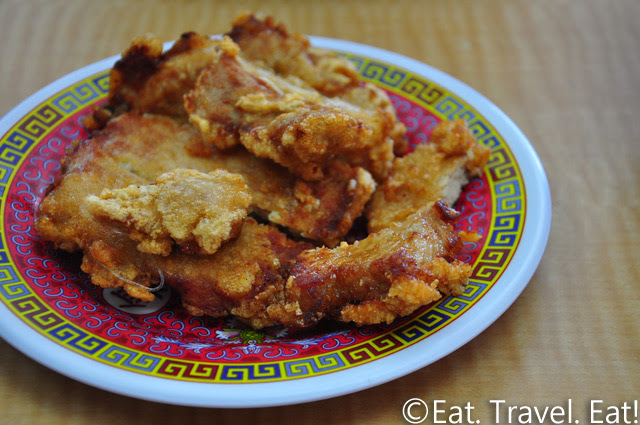 On another visit (there's been too many!), my companion ordered the Beef Stew Noodles Soup, and so I ordered the Pork Chop Noodles Soup, hoping that I would get a lighter soup overall. I was correct-- I got a bowl of noodles and light broth, with the crispy pork chop put aside on a separate dish. Any blandness to this dish was counteracted with accompanying bites of the pork chop, and some scoops of broth from the Beef Stew Noodles Soup-- a little of that broth went a long way in increasing the flavor of this dish! 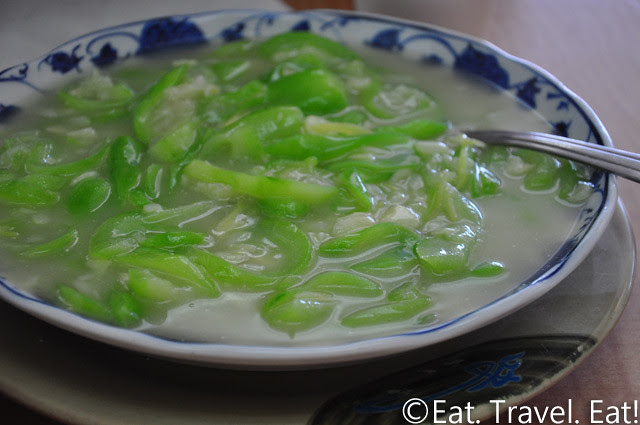 And as a vegetable side, we ordered the Fried Sponge Gourd (7.50 USD); you would probably recognize this better if it was called "chinese okra." Although the gourd was not actually in season when we tried the dish, the gourd was still sweet and pleasantly prepared. 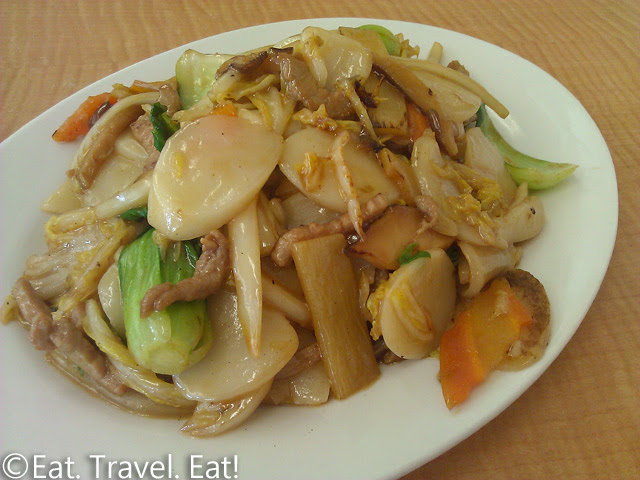 And on my most recent visit, I had the Fried Chewy Rice Cake (6.00 USD), having saw someone else order it and get a generous portion. My portion was not as generous, but I liked how the plate had plenty of vegetables and meat to go along with the rice cake.