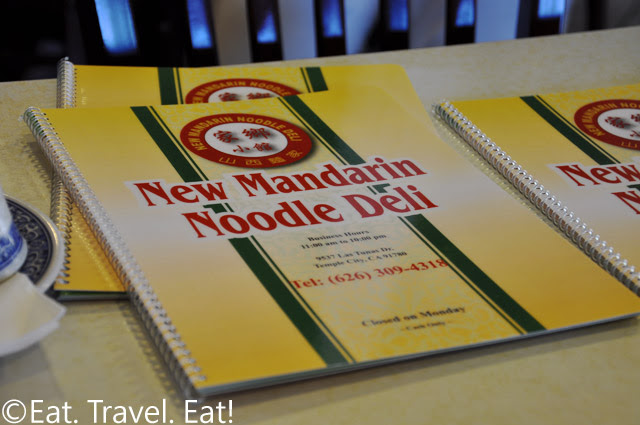 On June 9, 2012, New Mandarin Noodle Deli was featured on Easy Chinese, a new, rebranded season of an existing show on the Cooking Channel with Ching-He Huang as host. At the restaurant, the chef taught Huang about the process of making shou la mian (hand pulled noodles) as well as dao xiao mian (knife cut noodles), and Huang sampled a rendition of tomato and egg knife cut noodles on location.  Of course, Huang proclaimed it as delicious, recognizing the springiness of the noodles.
Similar to other restaurant visits featured on Easy Chinese, Huang then proceeded to make her own dish, utilizing the knife cut noodles from the chef. In comparison, her dish was more spicy, with liberal application of chili oil.
I found the feature interesting as New Mandarin Noodle Deli certainly hasn't been the most popular of all places, and my review, along with more recent reviews, have not been positive about the place. Perhaps there's something that the Easy Chinese crew that we do not necessarily know yet (it is known that noodles are good though), but I'll be considering a revisit sometime soon. Nevertheless, it is pleasant that the San Gabriel Valley has been featured again in national television!