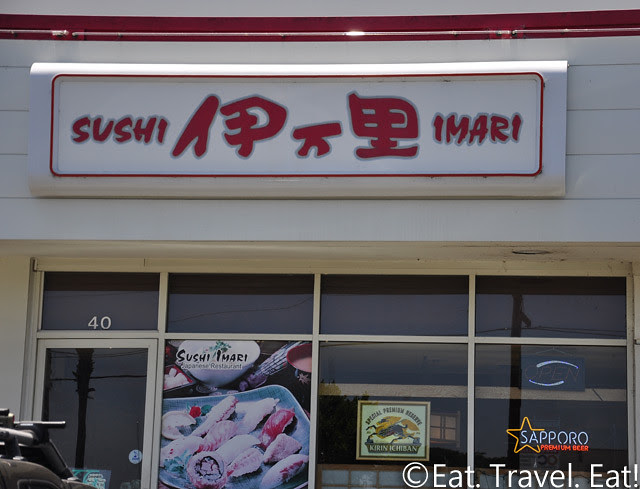 Originally I had planned to visit California Fish Grill or Bear Flag Fish Company, but a friend's recommendation for Sushi Imari swayed my initial decision. Complimentary surprises plus a closer location to UC Irvine made this place more attractive to the other restaurants, and it also happened to be that Sushi Imari was positively reviewed on Monster Munching. Plus one indeed! 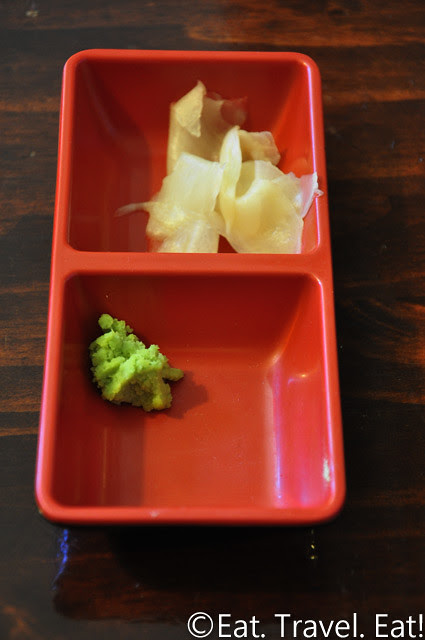 Inside, waiters friendly greeted us and brought us to a table. We sat in an atmosphere heavily decorated with Japanese (and some Korean) ornaments, with elements of light and dark woods. A fusion menu was also in sight; besides the fresh fish, there was a whiteboard with various fusion rolls, of which some were already on the regular menu while others were new creations. 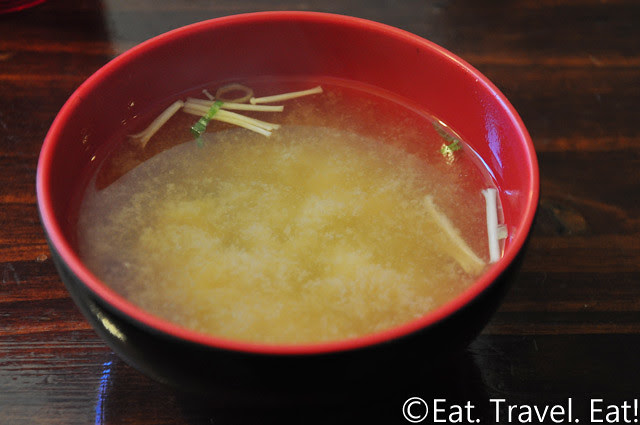 Sushi Imari's complimentary miso soup, provided to us after ordering, was different compared to some other miso soups as there were a few enoki mushroom pieces in the soup along with the usual tofu and seaweed pieces. The mushrooms contributed a slight earthy flavor to the soup, complementing the flavor of the miso and dashi stock. 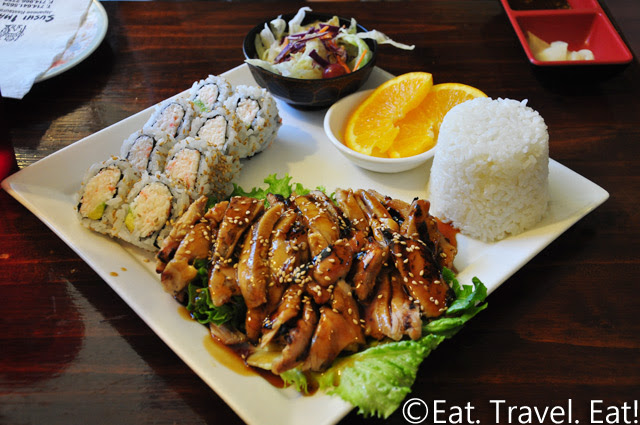 Sushi Imari's "from the kitchen" combinations parallel with those of other restaurants, and so does the pricing of this two item combo (9.50 USD, lunch price). The plating was not; the items in this case were placed nicely onto a large white plate instead of the typical bento box. The chicken in the chicken teriyaki was tender, and the California Roll was a competent imitation crab edition. 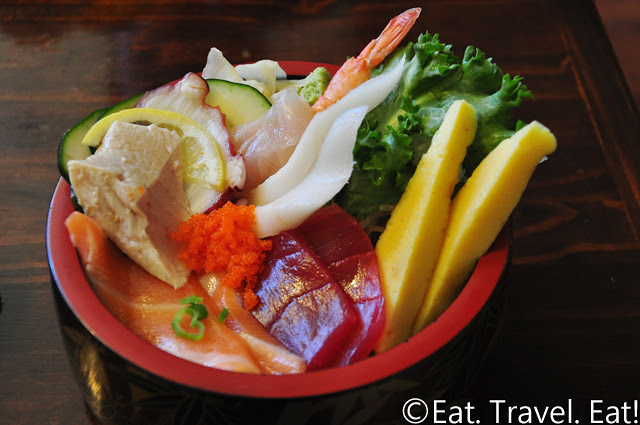 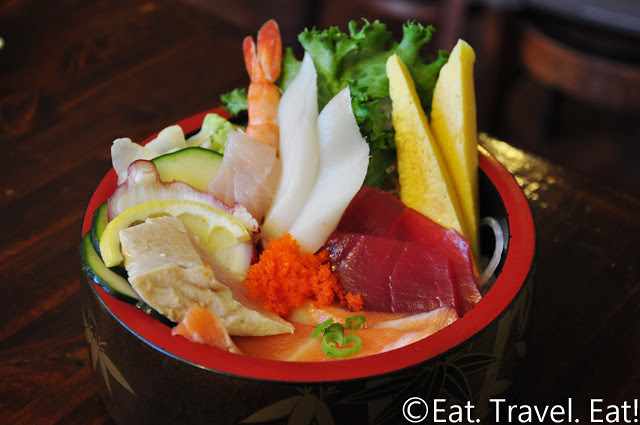 Sushi Imari's Chirashi Bowl (12.95 USD, lunch price) was likewise a strong rendition. There were ten pieces of sashimi: two pieces of tuna, two pieces of salmon, two pieces of escolar/ white tuna, two pieces of albacore tuna (one raw, one cooked on the exterior), one piece of octopus, and one (cooked) shrimp. Also featured on the chirashi bowl were two pieces of tamago, some masago, a slice of lemon, several slices of cucumber, daikon, gari, a herb leaf, and a generous amount of wasabi. All this was placed atop a bed of sushi rice, seasoned with a layer of furiake seasoning. All the pieces of seafood were fresh, and came in plentiful sizes; I liked how there were plenty of pieces of radish and gari to alternate between bites of the seafood and rice. 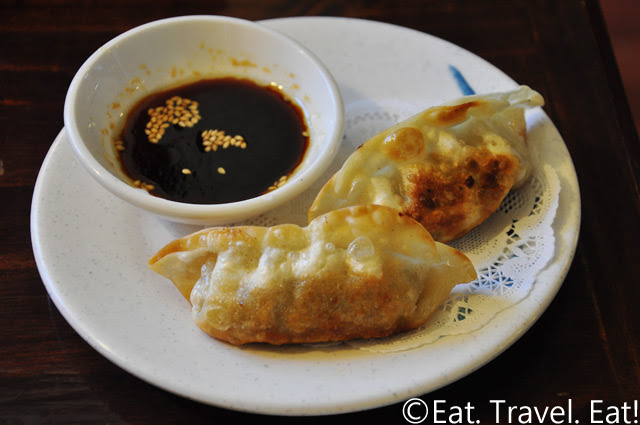 The waiter made sure to check up on our food throughout the visit, and halfway through our entrees, he happily presented us the first surprise of two surprises in this visit: two freshly fried potstickers, served with a soy and sesame sauce. Each potsticker elicited great crunch and a tender, meaty interior, while the sauce added depth and fragrance through the soy sauce, toasted sesame seeds, and sesame oil. 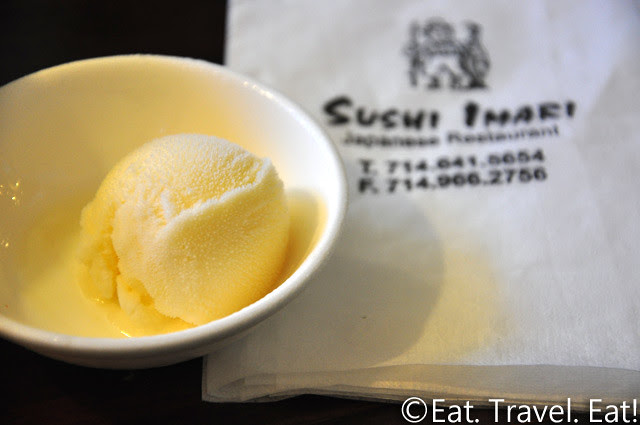 And as the waiter delivered our check, he also gave us mini scoops of vanilla ice cream, each served in a small saucer. The amount of ice cream may have not been significant, but it was perfect amount to refresh the palate. It did not bog us down or make us wish for another cup of water to wash it down, but instead capped our experience at a pleasant note.

At first the question had to be asked: why were so many people talking to the chefs, as if both knew each other well, during our visit? After the visit, the deftly prepared food and friendly service provided a strong answer.

elmomonster said…
Cool! You tried it! The freebies are great aren't they? Makes you know they care that you come back. Even without them I really loved that amaebi of theirs. And I had the best uni I ever had here!
July 10, 2012

I was debating whether or not to try the uni, and now I'll definitely try it out next time!
July 10, 2012