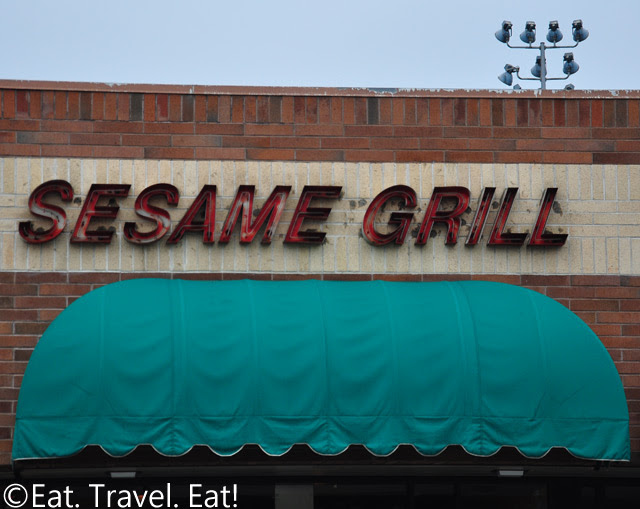 I've written about Sesame Grill probably too many times, each time discussing a new iteration or feature. Yet never did I expect that it would veer off its successful path that it has been taking for many, many years. There may have been the Chinese dishes, Japanese ramen, American burger experiments, yet time again they would revert back, perhaps improve upon, their old dishes.

So it was definitely a shocker when Sesame Grill completely changed itself and became "S.G. Cajun Seafood" for about the first half of 2013. Sure, Japanese ramen may have been different (it came from a Japanese chef exchanging cooking techniques with Sesame Grill's executive chef), but Cajun seafood a la Boiling Crab? Other than the burgeoning Cajun seafood scene around the San Gabriel Valley, there was little context. A revamped interior, environment, and clientele replaced the old, but unfortunately, the changes didn't bring success, with middling reviews coming in from new customers and complaints from the former. 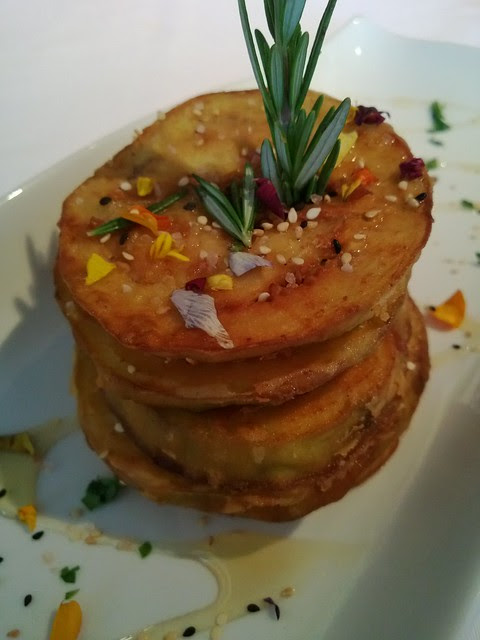 What is heartening, however, is that the management not only realized their mistake, but implemented changes. The "former" Sesame Grill has now come back-- unexpectedly so that during my first visit, I didn't even have my DSLR on myself -- with an emphasis on food quality and most importantly, making the clientele satisfied. The vision has now been focused-- it's not just any cuisine on the menu now, but rather sticking to the original intentions--European cuisine with a fusion twist--and with improved qualities. 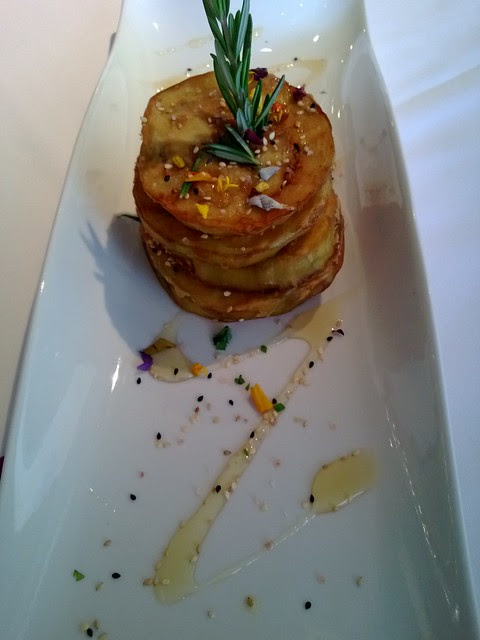 Normally I don't partake in too much fried food, but when the manager brought over a new creation to sample (this dish was complimentary)-- a fried eggplant appetizer with honey, sesame seeds, rosemary, and salt crystals, we couldn't refuse. The interplay of light, crisp coating, soft, meaty eggplant interior, fragrant rosemary, sweet honey, crunchy sesame seeds, and bursts of savory salt proved to be positively delightful. 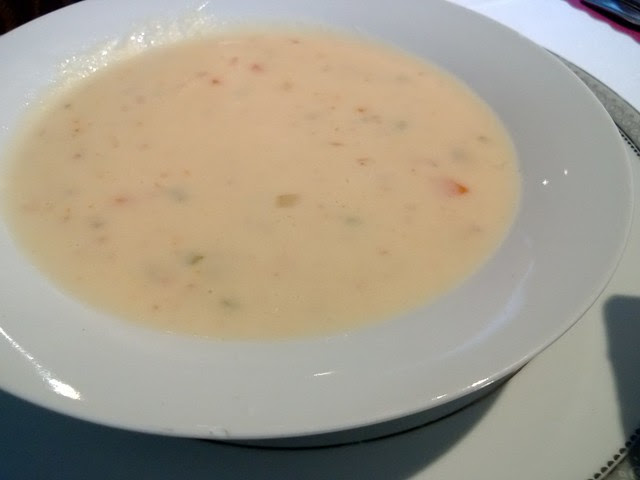 Sesame Grill's clam chowder was just like its past clam chowder-- rich, with plenty of cubed veggies. Clams were present in a much more plentiful fashion compared to S.G. Cajun Seafood's, but we couldn't have said no to even more clam! 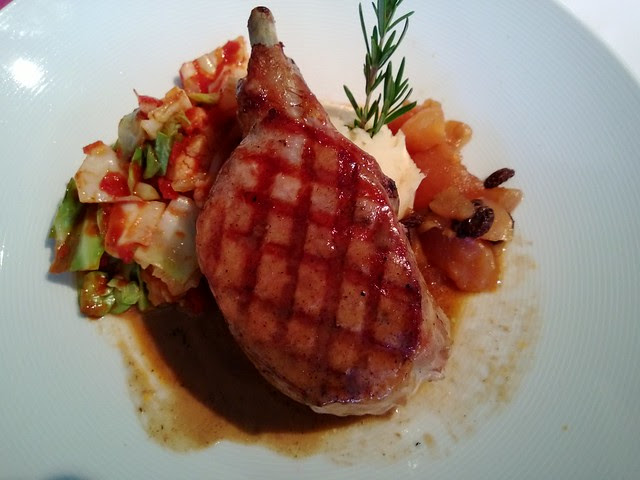 My companion's double pork chop with applesauce, mashed potatoes, and braised cabbage proved to also be memorable. The double chop may have been too much meat, but it was cooked expertly, turning out to be meaty, juicy, and tender. The accompaniments proved to accent the meaty flavors even more so. 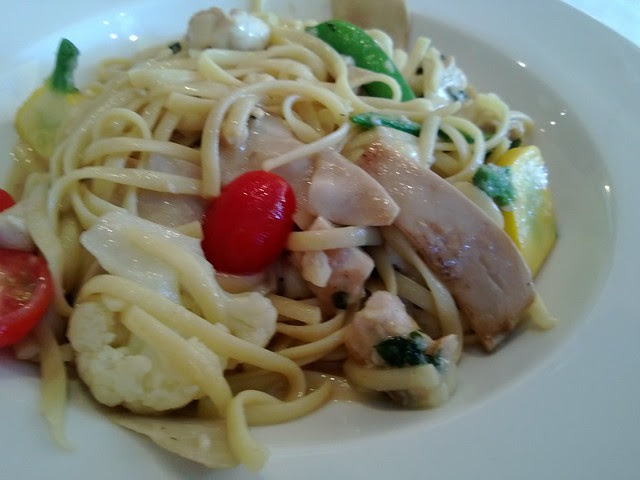 The typical chicken linguine even had some improvements, mainly in the vegetable department. Instead of just a few vegetables before, this visit's chicken linguine had a plethora of veggies, not limited to tomatoes, squashes, different mushrooms, and squashes. A light sprinkle of cheese tied the dish together, without making it too rich on the palate. 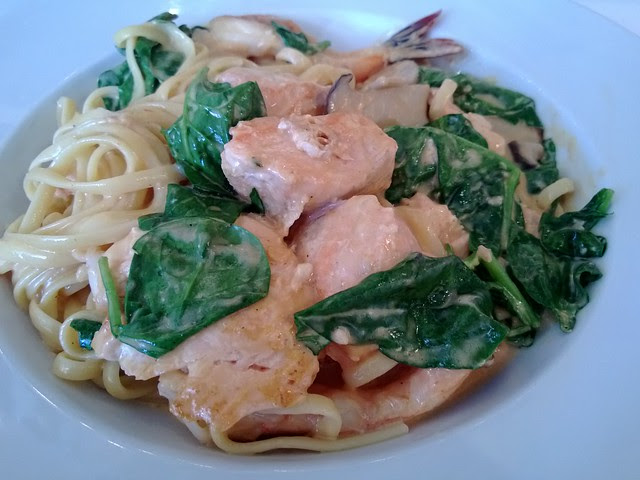 In contrast, my salmon and shrimp linguine was a tad rich for me with the cheese involved in the sauce, but the spinach and plentiful seafood made up for the difference. 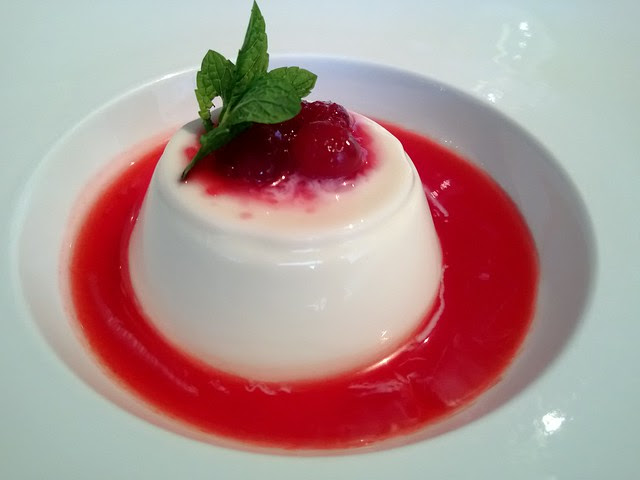 Sesame Grill's desserts have always been tasty, and this panna cotta was no exception. Like past versions, this vanilla panna cotta was creamy and smooth, with the bright cranberry sauce providing some zing. In this case, we saw some additional attention placed on plating, with the whole cranberries carefully placed atop the panna cotta instead of with the sauce. 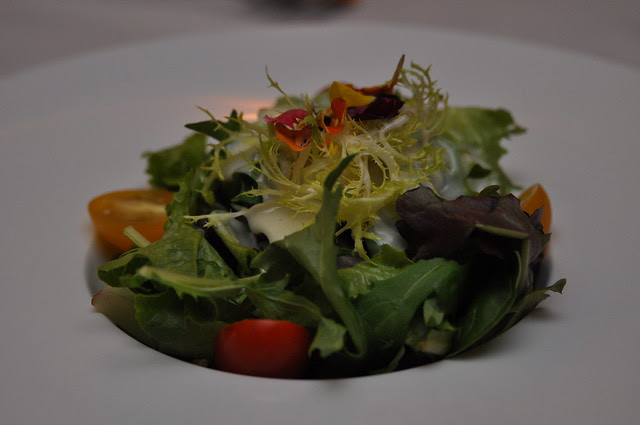 After a positive visit, we came back to celebrate and enjoy dinner (hence the dark photos--flash bounced to the ceiling, by the way) after a special occasion. To begin, we had some complimentary bread and butter, clam chowder for some of the guests, and a green salad-- now served in the previous "premium" only green salads. The greens have certainly improved, and the salad dressing is still the same sweet one as before. 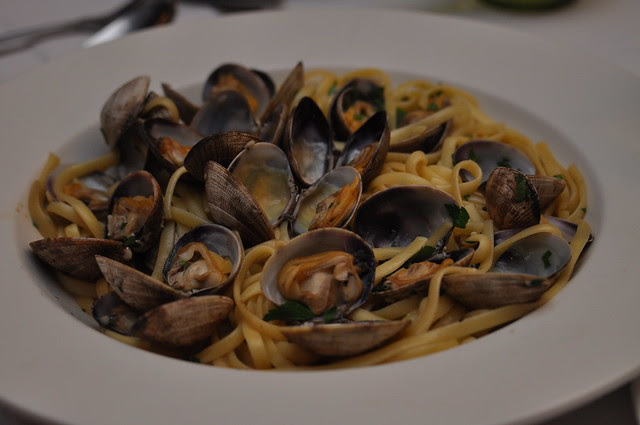 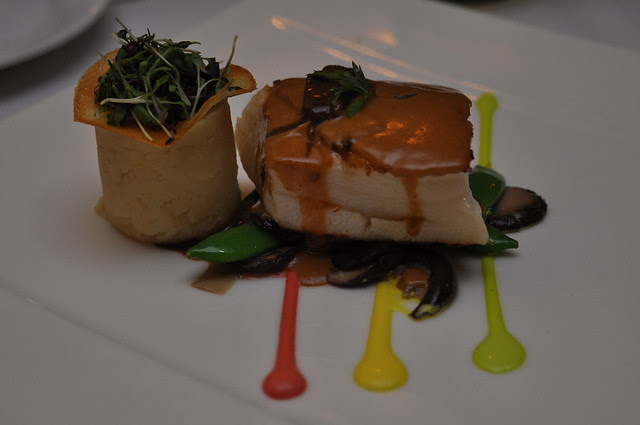 Attention to detail continued with the chilean sea bass, which was grilled much more lightly than the one we we had during Thanksgiving. Like previous renditions, the seabass was buttery and cooked just right, and the attention to detail to shown throughout the entire plate. 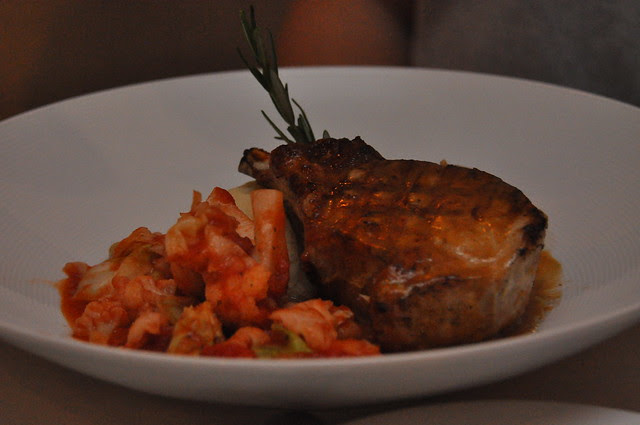 One visiting companion, after hearing our story with the double pork chop, had to also order it as well! Unlike us, however, he ate it all during this dinner-- quite amazing. 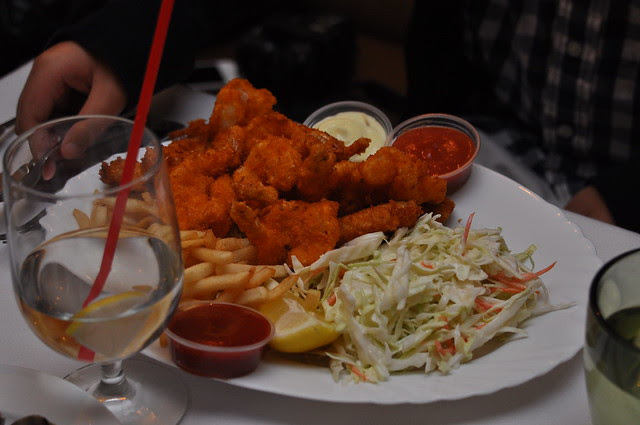 One younger companion decided to try one of the staying items from the S.G. Cajun Seafood days--a fried seafood platter, which came with copious amounts of fried shrimp, fish, french fries, and coleslaw. It was so much, in fact, that I was able to sample a couple of pieces of fried shrimp and a fish filet. The fried food has certainly improved from the old Sesame Grill- the breading sticks to the seafood, and it was not greasy either. 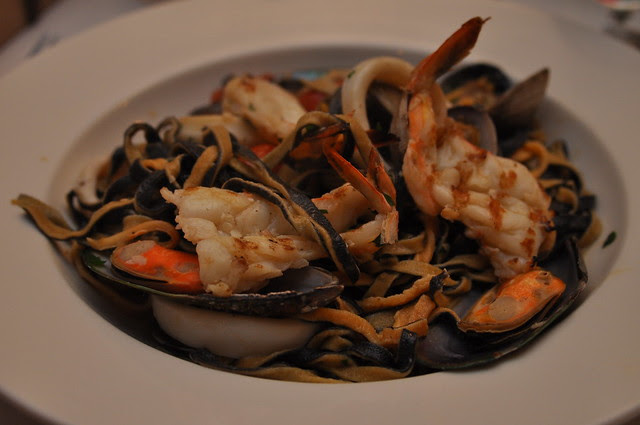 Personally, I had to fulfill my desire of having Sesame Grill's famous Seafood Pasta (primarily due to the homemade squid ink pasta), so I ordered it on this special ocassion! The noodles were handmade and chewy and were tossed in a white wine garlic sauce with plenty of mussels, scallops, calamari, and shrimp. I wished that there was a tad more sauce, but overall it was quite tasty. Mostly it was rave-worthy due to the squid ink pasta, but overall it was a solid dish. 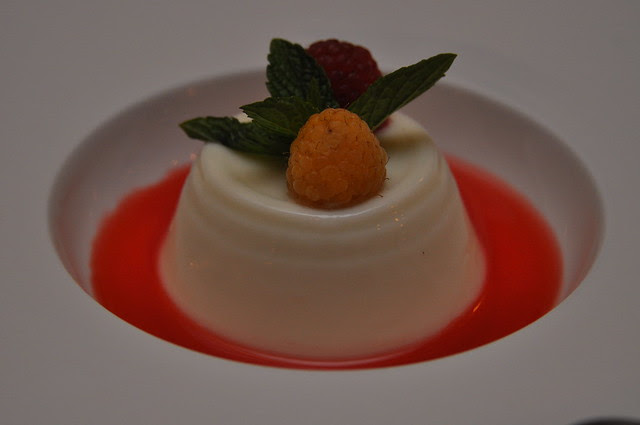 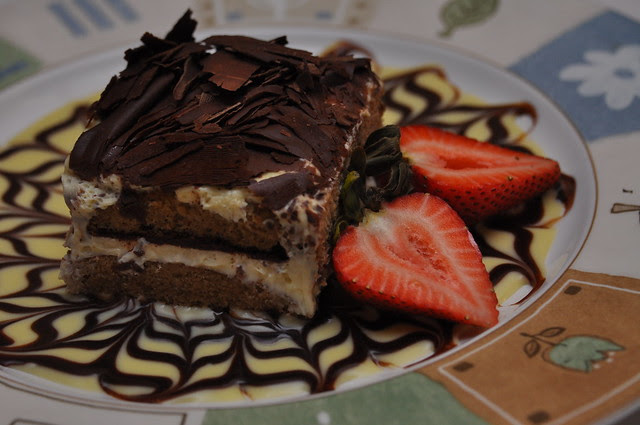 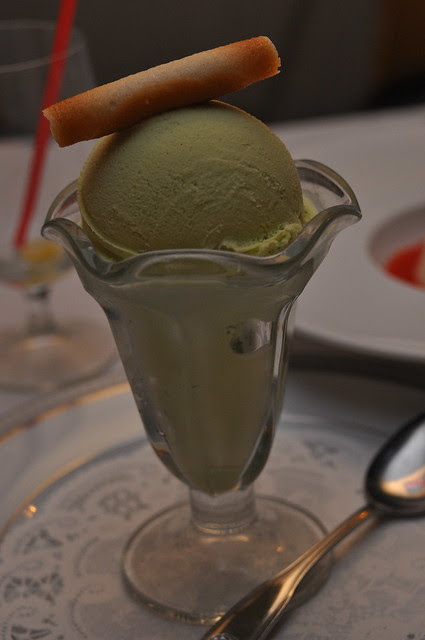 To end we had a wide variety of desserts-- the panna cotta, tiramisu, and green tea ice cream. Everything was as tasty as before (and plated even more pleasantly than before), and that isn't a bad thing-- Sesame Grill's desserts have consistently been strong renditions of the respective dessert.

Sesame Grill's ability to realize a mistake and make significant changes to improve an institution is very notable. Sesame Grill's new, focused direction allows both employees and clientele to be more upbeat and satisfied--an inspirational change from its last effort. Prices may have increased, but the overall experience has likewise improved, and I am hopeful for its improving future.