Suffice to say, Peruvian food has certainly been a cuisine of interest since I started reading food blogs. Yet, it happened to be chance when I actually decided to visit one. During another recent trip to the Orange County, I stumbled upon Inka Mama's when looking up restaurants nearby South Coast Plaza. Then I read a glowing review of it from Goei. It was definitely settled-- I had to fulfill this 5+ year old desire that day! 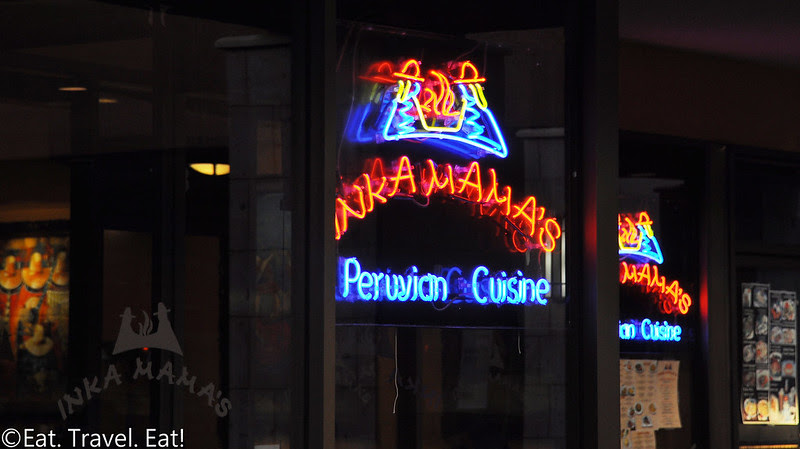 Inka Mama's is a small, Orange County family operated chain of Peruvian restaurants. Located right across South Coast Plaza from Magiannos in a large strip mall, Inka Mama's is easily accessible for nearby residents, shoppers, hotel visitors, employees, and tourists alike. Its own spot in the strip mall, though, is slightly covered-- it's in a lower floor of a multi-level structure, covered primarily by shade. Look for the Men's Warehouse nearby, and in our case, the flow of incoming and outgoing customers to Inka Mama's, to find the restaurant. 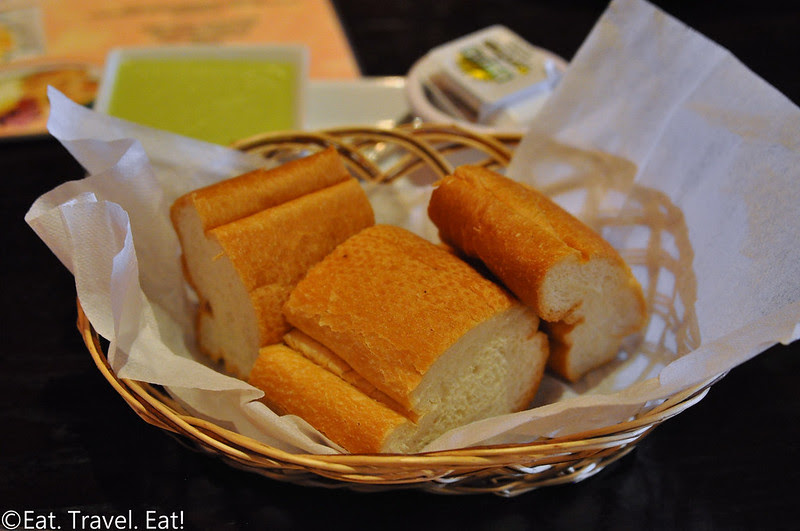 Inside, we enjoyed the large drawings, which effectively provided a virtual transport to Peru itself. And not much longer after receiving our menus, came some complimentary bread, butter, and aji sauce. Oh yes, there it was!

Yet it wasn't just all about the aji sauce, whose creamy, piquant pepper, guacamole like taste kept luring us to have more of it throughout the entire meal. The bread was also fantastic-- lightly crispy on the outside, and so soft and tender on the inside, like the french bread at Golden Deli. We enjoyed the bread so much that we had three baskets of it before our appetizer arrived! 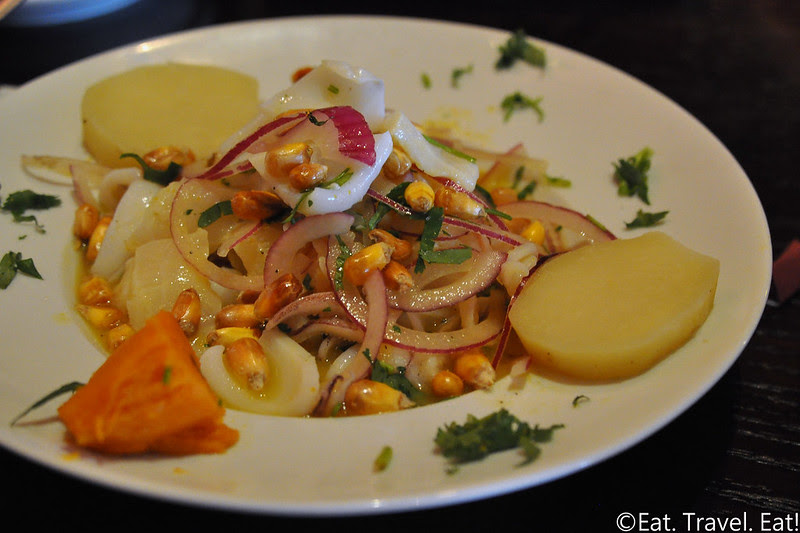 Here, the seafood was "cooked" expertly, at least for the shrimp and squid. On the other hand, the fish was still quite raw; we submurged it into the marinating liquid to cook it further-- and cook it did! The remaining leche de tigre didn't go to waste either-- it went fantastically with the bread and rice in our entrees. 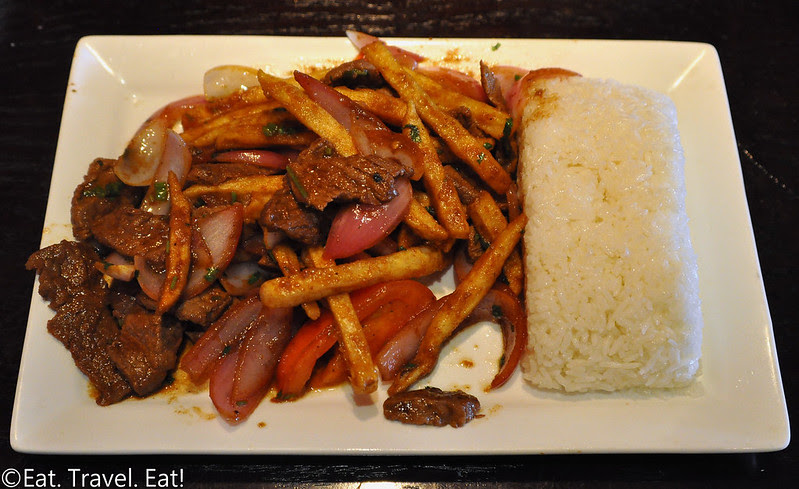 Halfway through the ceviche, our entrees arrived. First to come was the famed lomo saltado (13.95 USD). We loved the smoky, savory sauce composed of cumin and soy sauce, the crispy yet tender french fries, sweet sauteed red onions,  juicy, bright tomatoes, and fragrant rice. Some spoonfuls of aji sauce also brought in additional variety during selected bites-- this was a large platter, so much that we couldn't finish it in one sitting! The beef, however, was a tad tough, but that didn't detract too much from the overall dish-- at least they were not cheating by tenderizing the beef with baking soda. 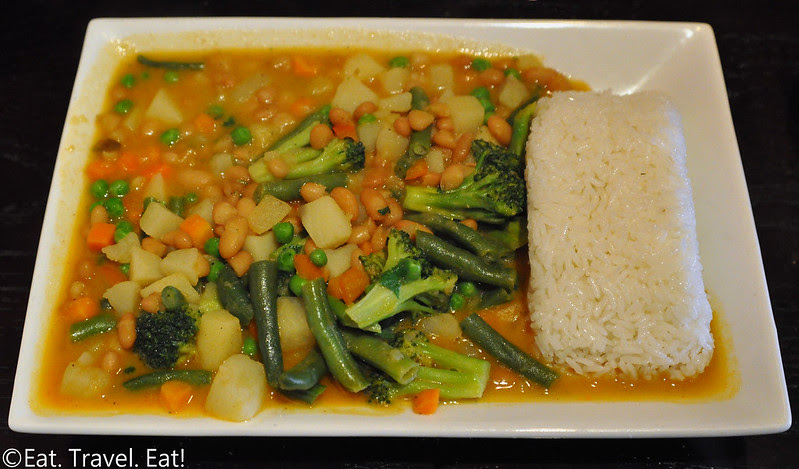 The Ajiaco de Vegetales (9.95 USD), was equally large and had a great spicy garlic sauce (we requested no spice, but it was tasty nonetheless) and a variety of vegetables-- green beans, broccoli, peas, carrots, red bell peppers, white beans, potatoes-- but with one blunder: most of these vegetables were most likely either frozen or canned. I'd suggest ordering something else, or ask for only fresh vegetables. 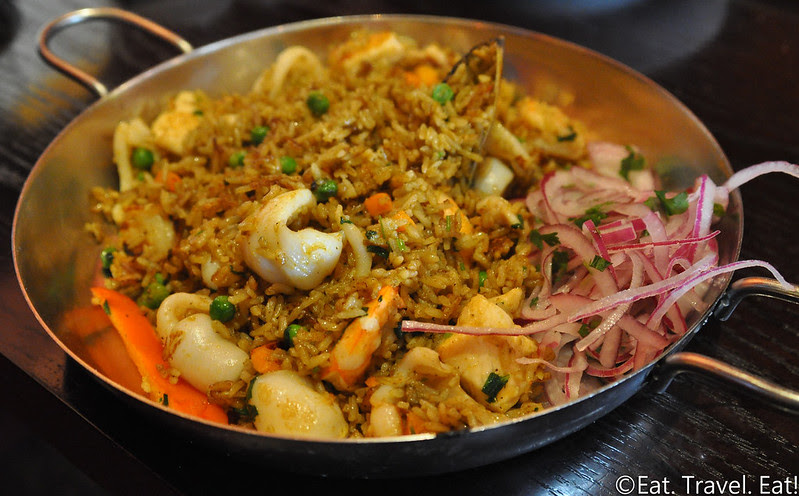 Since one of my companions ordered the lomo saltado, I was left to order something different. One of the suggestions from our waitress was the Arroz con Mariscos (15.95 USD), a "peruvian paella" made of seafood (fish, squid, and shrimp) seasoned and sautéed with fresh garlic and cilantro infused rice and served with sarza criolla, so I ordered this dish.

This was a bit like a fried rice in terms of texture, but with more toothsome rice and more complex, deeper flavors. The sarza criolla and again, aji sauce, helped to provide some brightness between selected bites. As for the seafood, they were cooked further than the ceviche's and were still equally pleasant. 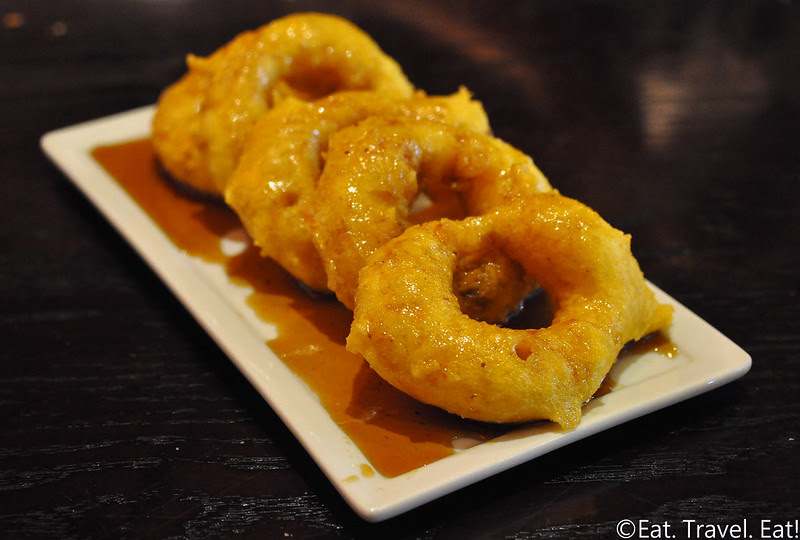 Eating our entrees, we saw our server bringing out a large platter of what looked to be donuts to another table, which piqued our interest--we had to try it too! And so a platter of picarones (weekends only, 6.00 USD for 5 picarones-- Peruvian sweet potato and pumpkin fritter) arrived at our table as well. Our server suggested us to cut open each picarón and soak the interior in the fig reduction syrup.

I liked the nice contrast between the savory from the picarones, which were lightly crisp and pleasantly chewy inside, and the fruity sweetness from the fig syrup. Enjoyable, but only at its optimum when it is fresh, so bring along some friends to share the entire platter (serves 4)!

This meal was a great, exciting introduction to Peruvian food! But now, it's time to learn and try more of this fantastic cuisine.

EatTravelEat said…
Aji sauce is too awesome! We finished the entire bowl and asked for extras to take home...so good!
August 08, 2013