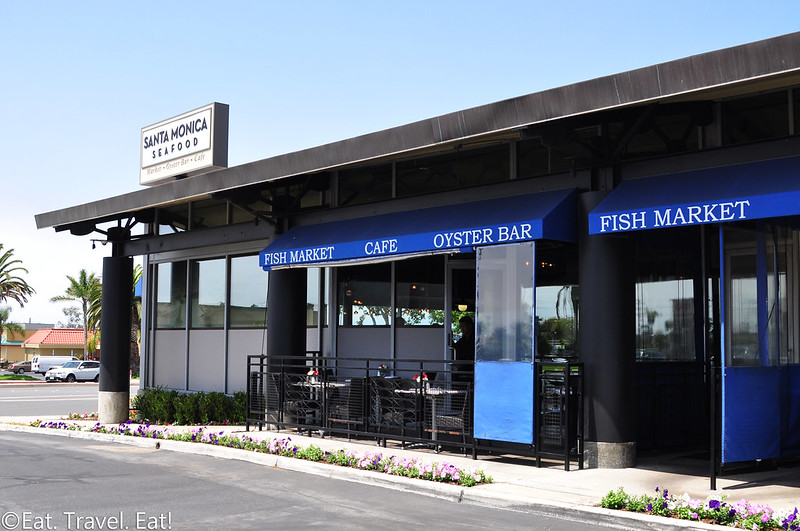 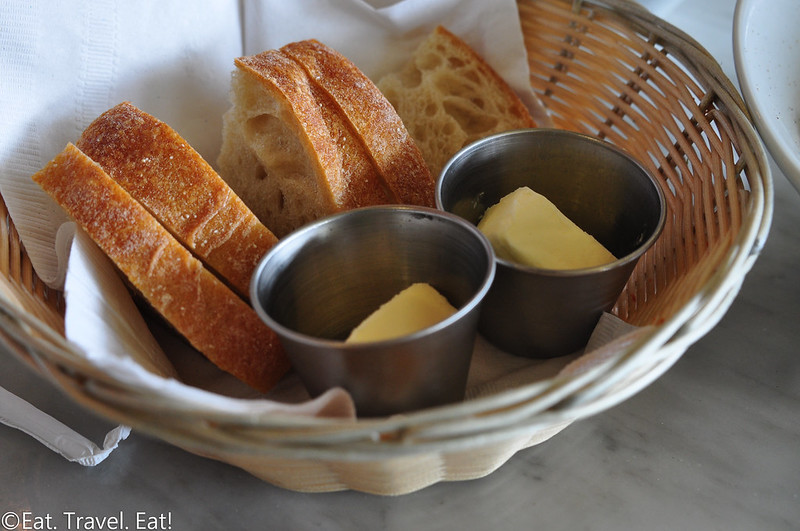 During our first visit, the cafe had just opened (11 AM), and being one of the first customers, they were very attentive, immediately requesting drink orders and introducing us to their daily specials. Bread and butter were available on request after ordering, and it was quite delicious-- fresh, crusty sourdough bread with a tender interior coupled with soft, unsalted butter! We had plenty of this. 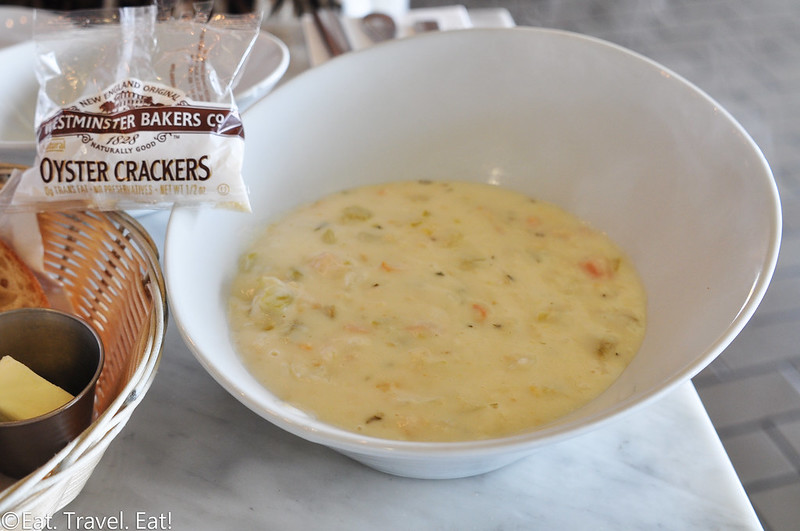 We wanted a smaller lunch, and so we went for soup and oysters. First, we ordered the large New England Clam Chowder (8 USD), a highly recommended item according to our waitress. 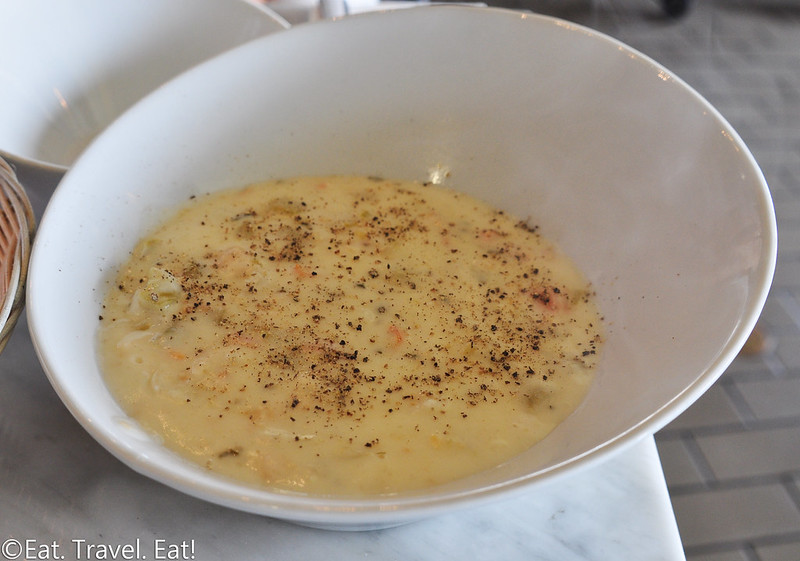 
Served with oyster crackers, and freshly cracked black pepper (on request), this clam chowder was fabulous. Probably because we arrived early, everything tasted extremely fresh. The potatoes were just cooked enough and the cubes were all straight and uniform, the red, meaty, juicy clams were dispersed everywhere and almost every bite, the cream just right and not too heavy, the soup permeating with seafood and cream flavor. We greatly enjoyed this--probably the best we've had in the area. 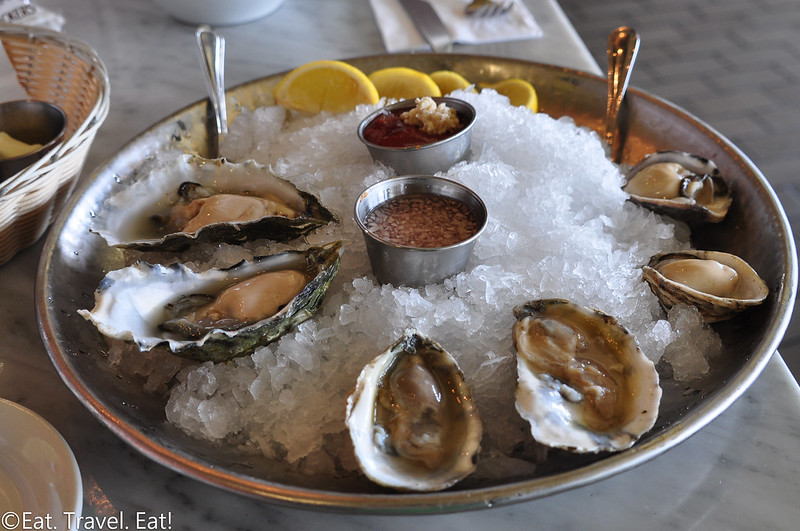 We also ordered some oysters to share, consisting of three different types of oysters (left to right): a British Columbian variety, Virginia, and Kumamoto (California). These were served with champagne vinegar with shallots, cocktail sauce, horseradish, and lemon.

We preferred the British Columbian and the Kumamotos, which were very creamy (Kumamotos especially) and smooth, but all were exceptionally fresh-- you could definitely tell that Santa Monica Seafood's position as a fish market also lends to extremely fresh seafood for their cafe. Make sure to ask the waiter/waitress for current special oysters-- sometimes there are more than those that are listed on the menu. 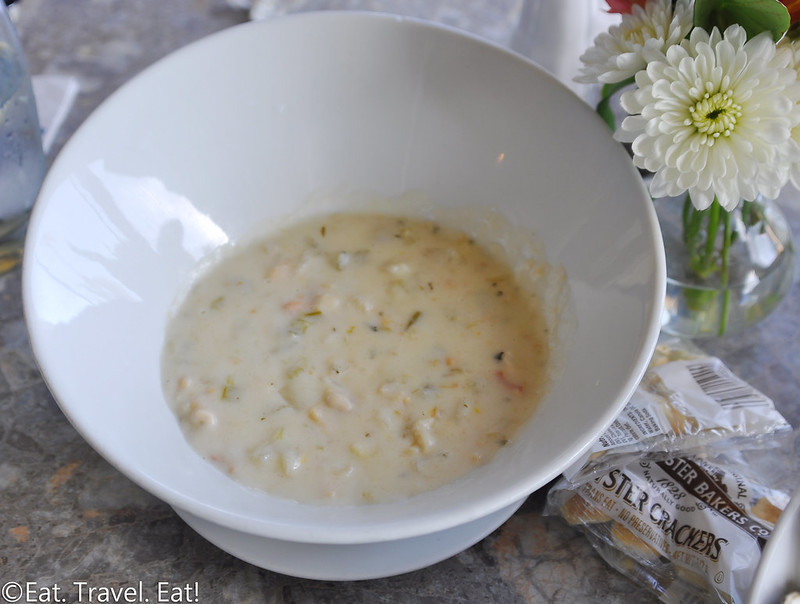 Given our remarkable first visit, my friends visited the restaurant again, and we visited again during the holiday season, when the fish market seemed to be so packed that people even had to queue for their seafood orders!

We ordered the clam chowder again, and although it was very similar to as last time, it didn't seem to be at such peak-freshness as last time, for we arrived slightly later in the day (around 12-1 PM). Moreover, the amount of clams was slightly lessened. Make sure to arrive early, or when a new batch of chowder is made, for the best experience. 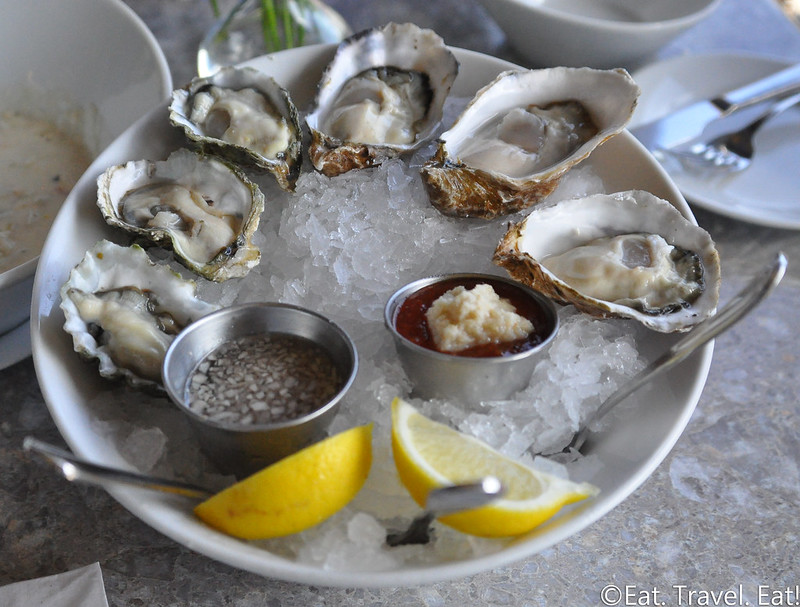 Oysters this time around were just as good as before. This time, we tried another British Columbian variety and another that the server recommended as a special item-- all were very good, just as last time. 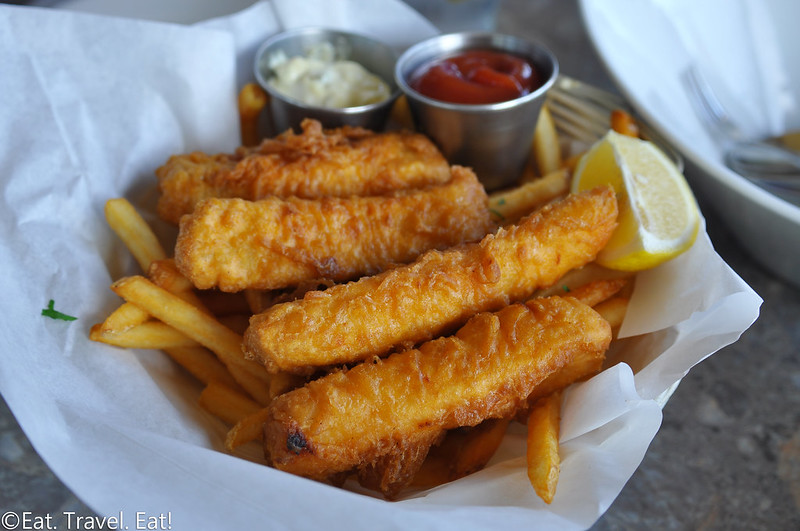 We also tried the fish and chips, composed of Alaskan cod and Santa Maria seasoned fries (on request). House made tartar sauce, ketchup, and lemon were served on the side, and malt vinegar was available on request. The fries are otherwise thinner shoestring fries (which are excellent), but we wanted to try the seasoned fries.

This was quite tasty, although the cod was just slightly overcooked. However, it was quite flaky and juicy, with a crisp exterior batter. We liked the fries as well, which were slightly thicker and had a light peppery note to them. 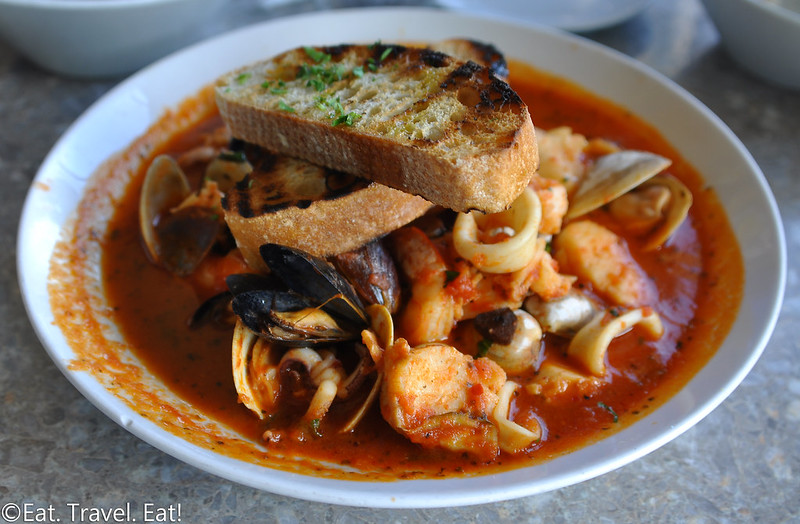 And for our second entree, we ordered the cioppino (28 USD), which had calamari, clams, mussels, shrimp, and fish cooked in a spicy tomato sauce and was topped with grilled sourdough toast.

This was a seafood feast! There was a lot of shellfish and seafood, and it was of great quality. The clams were so large, meaty, and juicy; the shrimp firm, with hard shells that accentuated its freshness. The calamari was very tender and lightly chewy, but the fish, on the other hand, was unfortunately a tad overcooked. We made sure to enjoy every bit of the tomato sauce, which was accentuated with all the seafoods' flavor, by enjoying the sauce directly, as well as with the grilled toast and extra sourdough bread!

Santa Monica Seafood offers some great seafood dining in a friendly, busy atmosphere, but make sure to go early for the clam chowder! And don't forget to get some of the seafood at the market section--we haven't purchased any yet due to inconvenient timing, but they look extremely appealing, and we've seen some customers buy a large haul of seafood to cook at home.

Crystal Carson said…
We have eaten here many times and I have to tell you that the shrimp is the best in the country. I ordered the fresh shrimp with cocktail sauce and wound up getting a second order because they were so delicious. The rest of the table could not believe how many I ate that day, I wished I could go back more often.