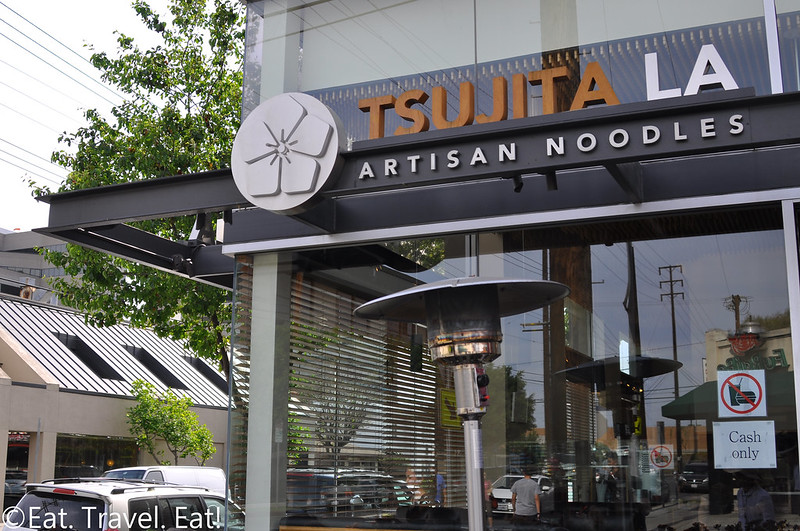 Tsujita LA Artisan Noodles has been in my radar on places to try for quite a while, given the wide media press (LA Weekly, Jonathan Gold), and recently, I was finally able to try it out! 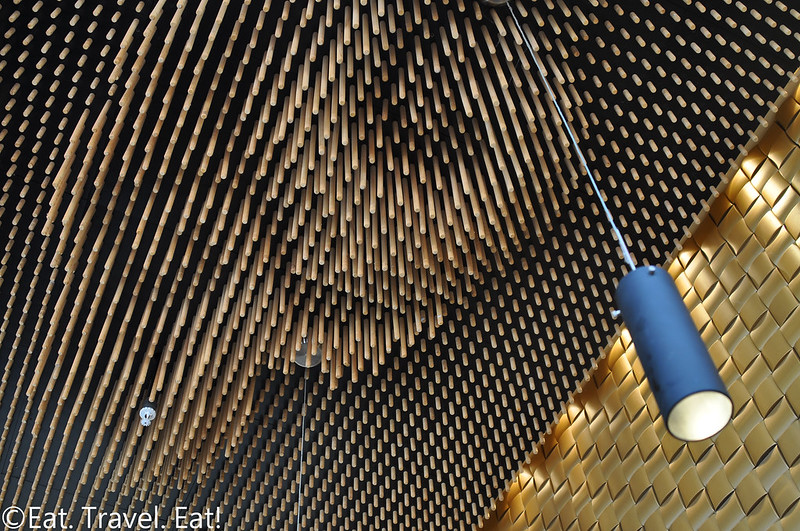 To avoid the lines, we had a late lunch around 3PM. Still, the restaurant was over 70% capacity, with lots of people seated outside, enjoying the LA sunshine. 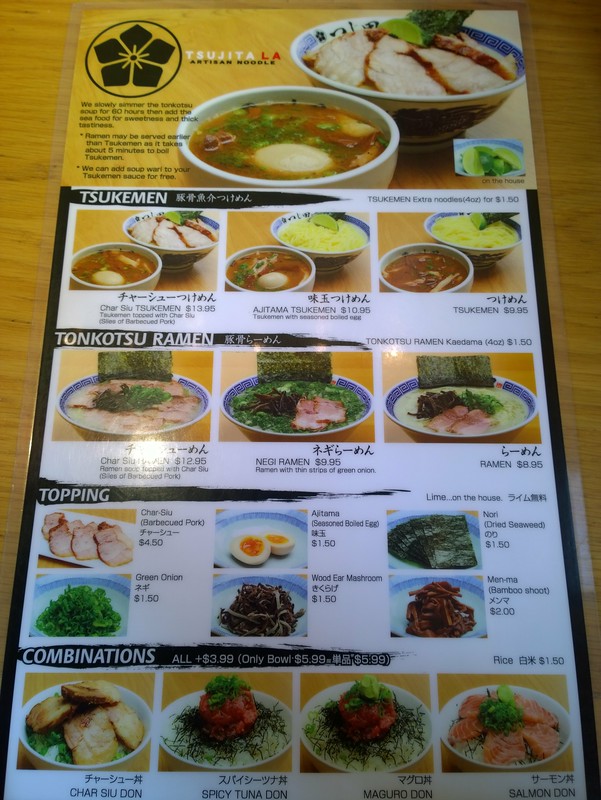 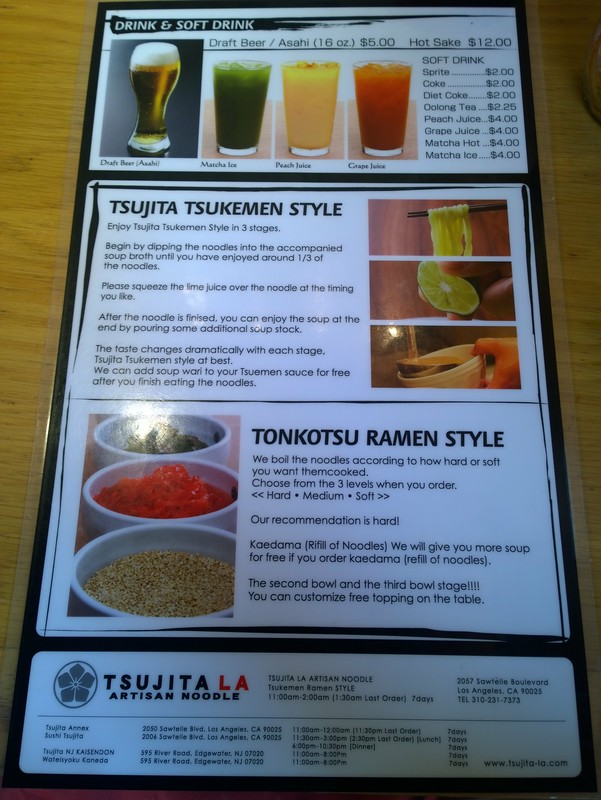 After being seated, we were handed a simple menu, consisting of ramen, tsukemen, sides, and rice bowl options. The drink of choice seemed to be water for the day--pitchers of water were placed at almost every table--so we went with that too! 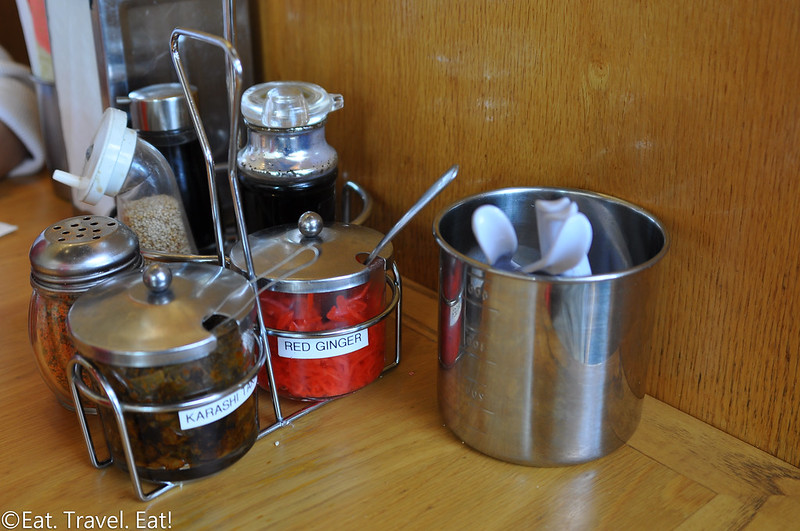 While waiting for our items, we analyzed the condiments selection, of which there were plenty of options to choose from. In the back was soy sauce, a sweet soy soup base sauce, tonkotsu sauce (which tasted like a distilled savory sauce), a toasted sesame seed grinder, and to the front were red ginger and karashi takana, a hot mustard leaf. 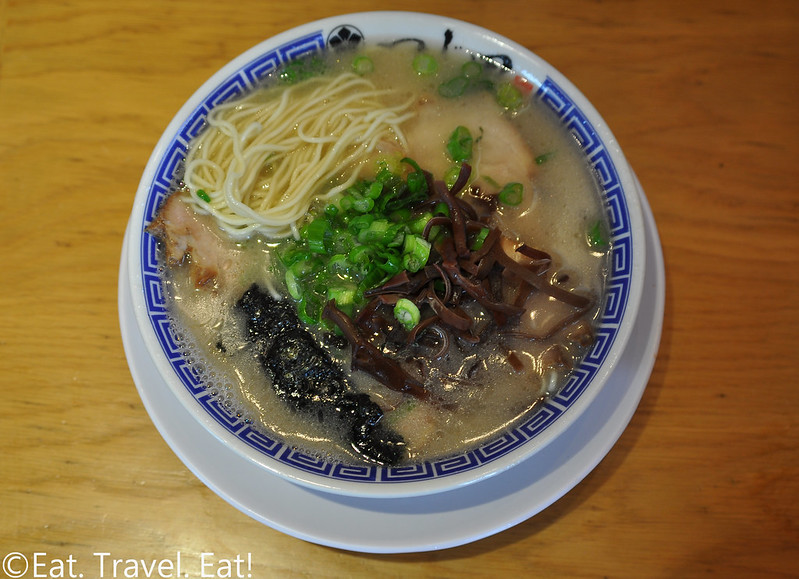 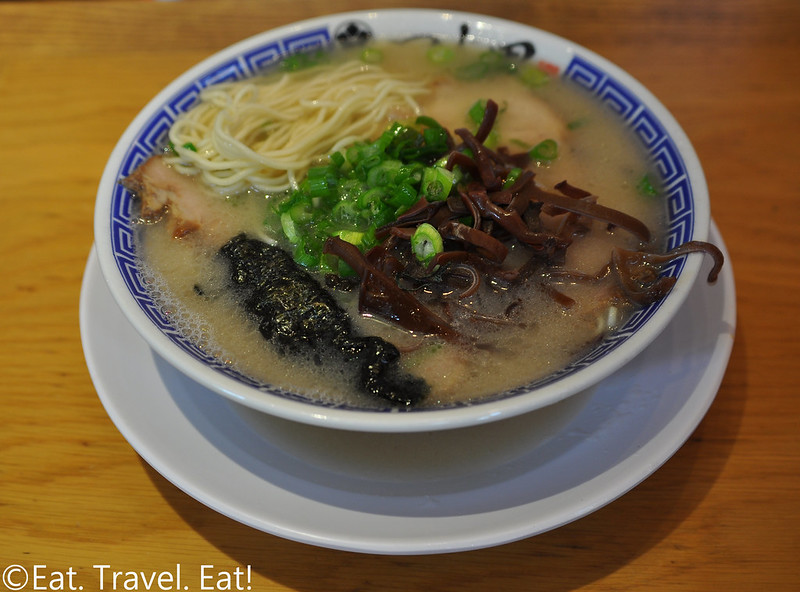 My companion ordered the Char Siu Ramen (12.95 USD). So filled to the brim with noodle and soup, a plate had to be put at the bottom of the bowl to capture any accidentally spilled broth, of which there was plenty!

At first taste, what stood out was the richness of the broth. Yes, it was very porcine, and thankfully not very salty, but it was also quite greasy and fatty-- a bit too much for our tastes. On the other hand, we liked the bright green onions, which helped to cut the fattiness, and enjoyed the snappy julienne wood ear as well. The ramen noodles were thin, firm, with a good stretch and pull, like Shin Sen Gumi's, and the char-siu smooth and marbled, but not exactly fall in the mouth tender.

A good bowl, if a bit on the expensive side! The noodles for the ramen, as well as the tsukemen, were all premade by Sun Noodle, placed inside a tray in a plastic bag at the chef's counter and cooked to order. 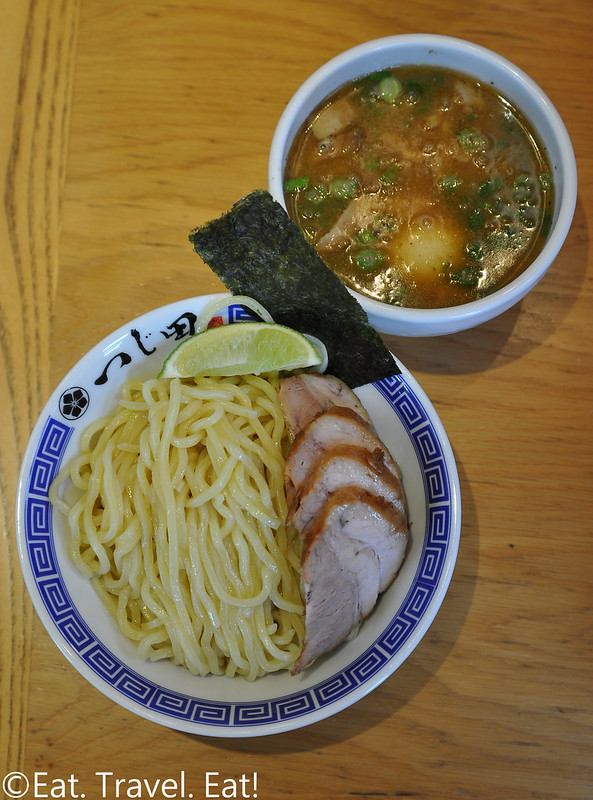 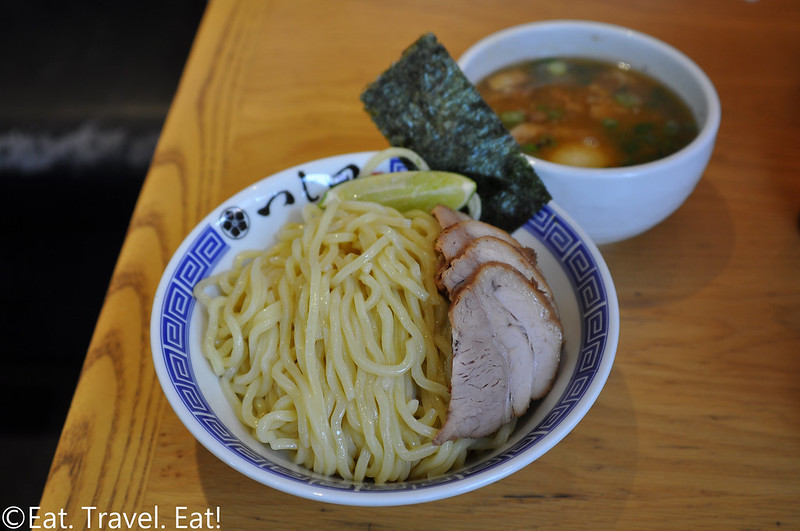 On the other hand, my Char Siu Tsukemen (13.95 USD) was a wild party of flavors. Here, we had chilled, fat, glossy, and toothsome noodles, the same char siu as in the ramen, lime, a seasoned boiled egg, and a luscious tsukemen soup broth, which was composed of the same tonkotsu pork broth, but heavily accented with the sweet soy soup base, the extracted flavor from bonito flakes and seafood, green onions, and strips of fatty char siu. 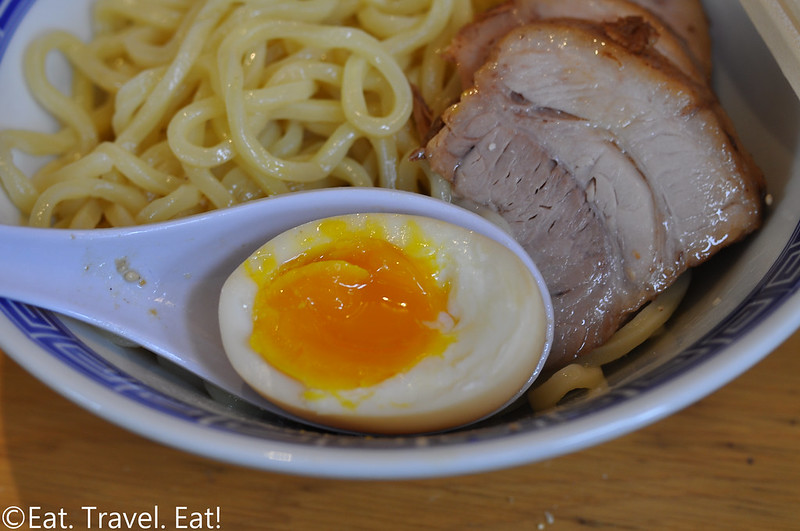 I quite enjoyed this (alongside with the toasted sesame and hot mustard greens, both of which provided additional flavor sensations), although a critical issue was that the soup broth was that it was quite salty, and likewise somewhat fatty--a layer of oil was preventing the soup from cooling down too quickly. Initially, there was a temperature contrast with the hot broth and chilled noodle which was quite fun, but as the meal progressed, the temperature contrast was not so great. On the other hand, the seasoned boiled egg was excellent--served warm due to the broth, and the egg white was tender and not too firm, while the yolk was creamy, smooth, and cooked just to the right stage where the yolk was starting to firm up, but was also slightly liquid.

Enjoying this, as they say, takes 3 steps: one is to simply dip the noodles in the broth, which fully displayed the umami-ness developed by the combination of soup base, pork broth, and seafood. Then, was to add the lime to some of the dipped noodles, which presented a refreshing feel--a smooth acidity to the bold flavor of the broth. (limes are also complimentary, so feel free to request extra if desired) Lastly--which by the time I was quite full from enjoying the plentiful amount of noodles and char-siu (perhaps a bit too much pork)--was to enjoy the remaining soup base with additional broth, of which our server did upon request. She wasn't very generous with the broth, only filling the bowl halfway full (when I had less than 1/4 of the broth remaining), but I enjoyed this preparation--here the sauce was toned down, and the resulting soup could be enjoyed directly more so. However, by this point, the saltiness was a tad much! I definitely wanted a lot to chug some more water.

Overall, we had a fun lunch experience at Tsujita LA Artisan Noodles. The hands-on experience with tsukemen, along with the wide array of condiments on offer, make Tsujita an interesting place to visit, and the quality and preparation were definitely at high standards. (though, we weren't asked for how we wanted our noodles cooked) Would I wait hours for lunch though? Probably not. However, if you do, Sawtelle just happens to have a ton of other food options nearby very much worth checking out (Hide Sushi, Nijiya Market, Curry House, Gottsui, Shin Sen Gumi, Daikokuya, Seoul Sausage, Blockheads, the list goes on and on and on), and that will help you pass by the time. Other offerings by Tsujita are also notable--sushi, isakaya, etc.--and I'll need to check those out soon.