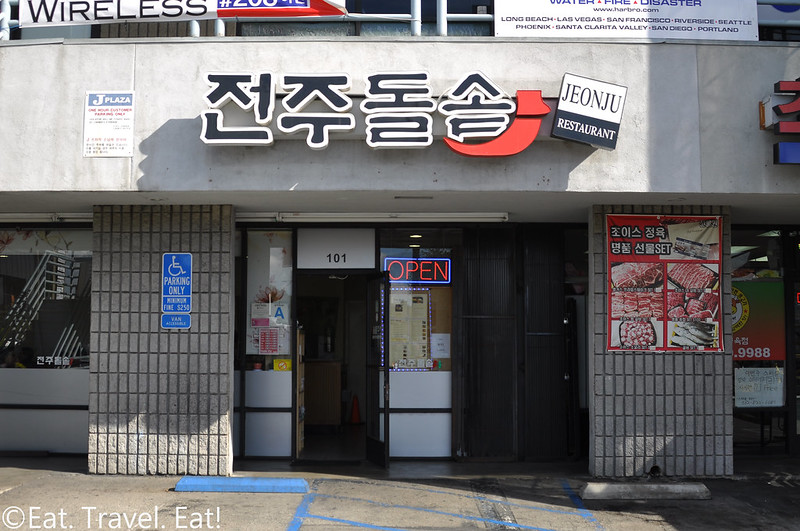 Widely known as a bibimbap specialist (their website is "bibimbap.webs.com," if it wasn't already understood), Jeon Ju is a venerable place to visit for a Korean meal. Not only is their bibimbap well done, but so are lots of their other items. 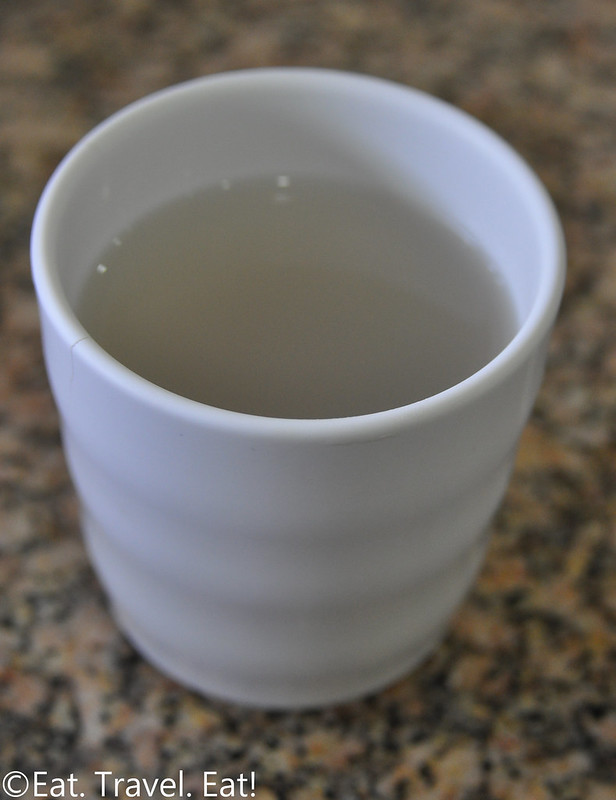 As we perused the multi-paged menu, cups of smooth, weak barley tea were provided at the table. 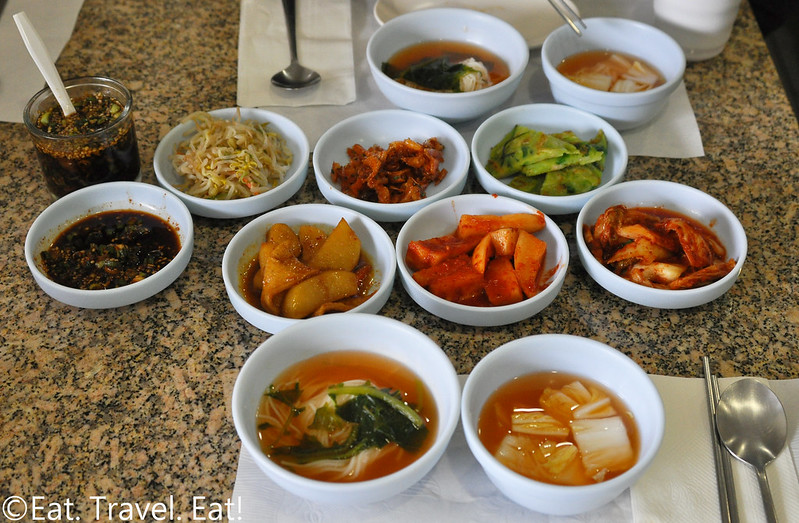 After ordering, we were presented with a wide array of banchan. There were six common items for the whole table--bean sprouts, marinated potatoes, sweetened, dried shrimp, daikon kimchi, a green pajeon, and napa cabbage kimchi. For each individual was a bowl of noodles in a lightly spicy broth and napa cabbage water kimchi. We found everything to be nicely done, and found the dried, crispy shrimp really fun to snack on.

A condiment of green onions, sesame seeds, peppers and soy sauce was also provided for a larger haemul pajeon and yeong yang dolsot that we ordered. 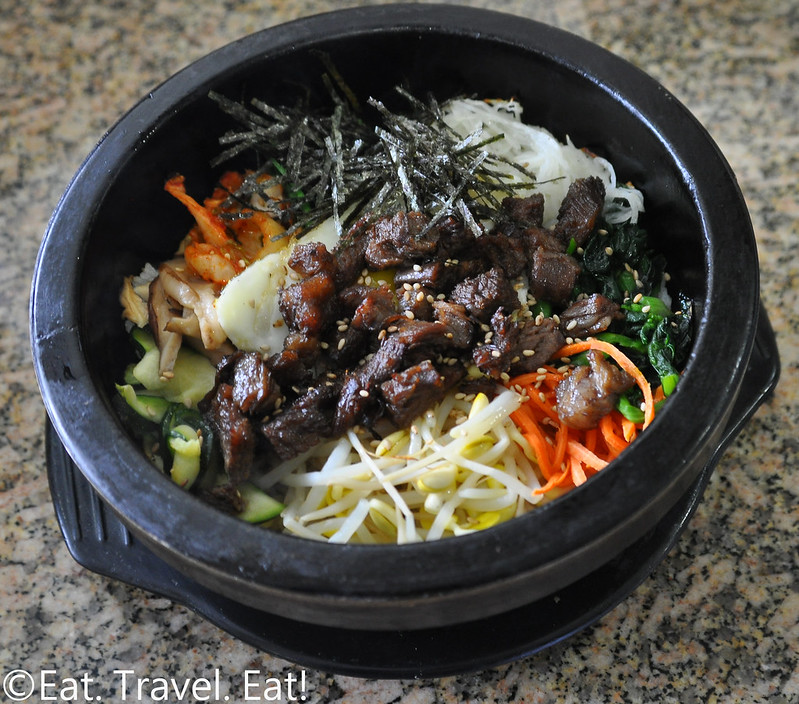 First to arrive was the famous galbi dolsot bibimbap (12.89 USD). Filled with a bed of steamed white rice, it was topped with soybean sprouts, zuchinni, sliced shittake mushrooms, napa cabbage kimchi, shredded daikon, spinach, julinenne carrot, a sunny side up egg, cubed pieces of galbi, sesame seeds, and seaweed. Later, our waitress also presented a side dish of a fibrous root to be added to the dish.

This was quite tasty--everything simply melded together very well, alongside some additional gojuchang (hot pepper paste). There was a balance between rice, meat, and vegetables, it was pleasantly seasoned, and the rice itself was heated long enough so that when it was presented at the table, the rice crust at the edge of the hot stone bowl was a light golden brown color. It also wasn't excessively oily, something which can happen with dolsot bibimbap. 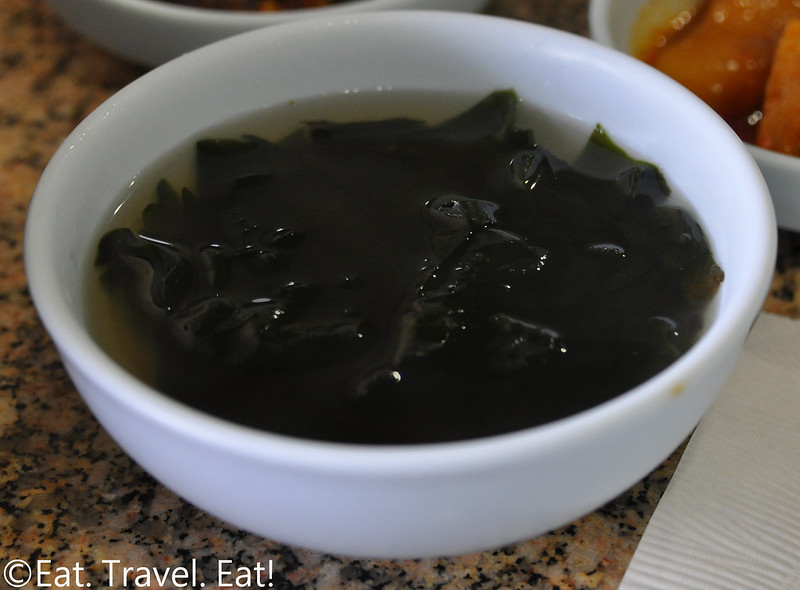 Miyoek guk, or wakame seaweed soup, accompanied the bibimbap, as well as all the rice dishes we ordered. The clean, refreshing soup cleansed the palate between bites of the heavier, flavorful rice. 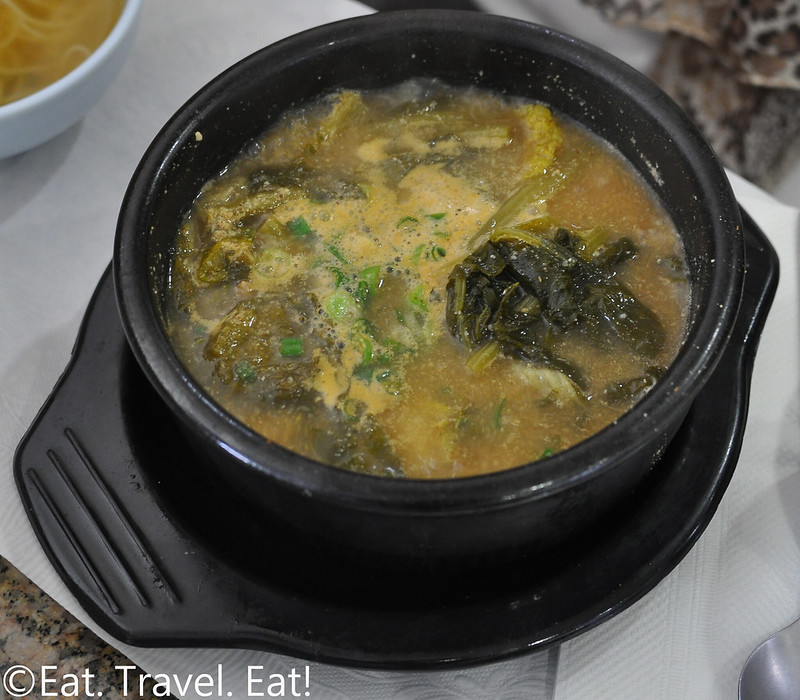 Next was the ugeoji tang (6.89 USD), one of the options available on the lunch menu. Although described as a beef and cabbage soup on the menu, it is more specifically a dried napa cabbage and beef soup. As a result, the soup had a much deeper vegetable flavor and exhibited the qualities of dried vegetables. 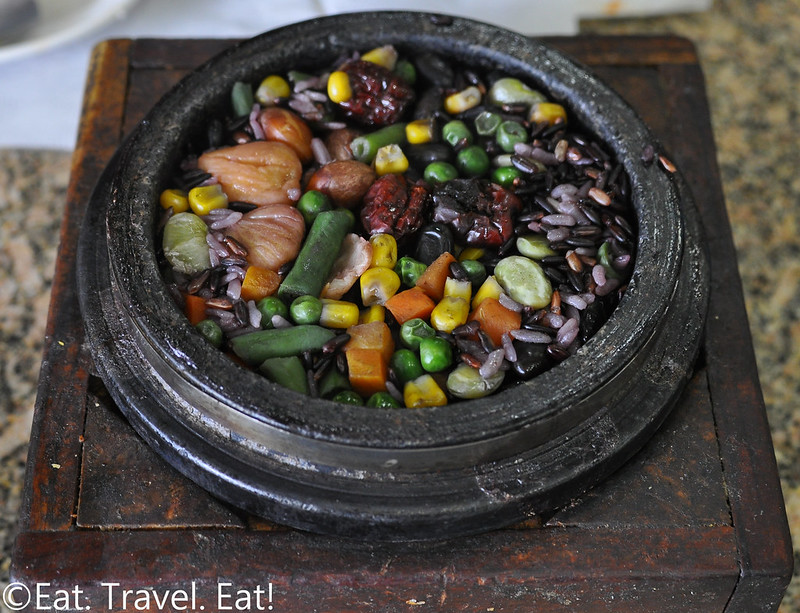 A very enticing photo of the yeong yang dolsot (12.89 USD), a earthenware pot filled with black and white rice, chestnuts, ginkgo nut, bean, jujubes, and frozen vegetables, enticed us to order it. It was a very packed bowl of healthy ingredients; being a mix of just those items, additional seasoning and pairing with the banchan made it more flavorful and enjoyable. We used plenty of the green onion, sesame, pepper, and soy sauce condiment on this. 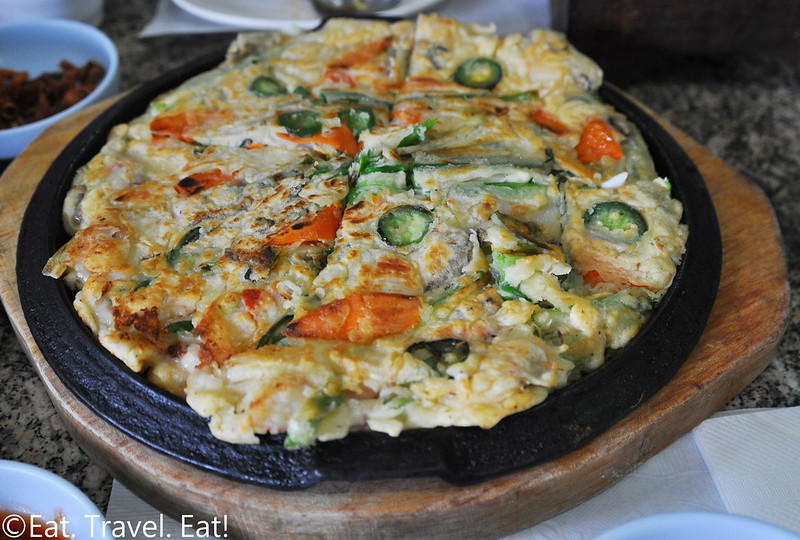 Last but not least was the haemul pajeon (15.65 USD), a large, sizzling seafood pancake. There was much more to this pancake than just the mixed seafood (shrimp, squid, octopus) and green onion; there were also carrots and jalepenos dispersed throughout the pancake. Tied together with plenty of batter, the pancake didn't fall apart when separated to pieces, and was very enjoyable with the green onion, sesame seed, pepper, and soy sauce condiment.

Overall, a solid meal at Jeon Ju. We'll be back for more, and next time we also plan on ordering the eundaegu jorim, which many customers enjoyed for their meal while we were there.