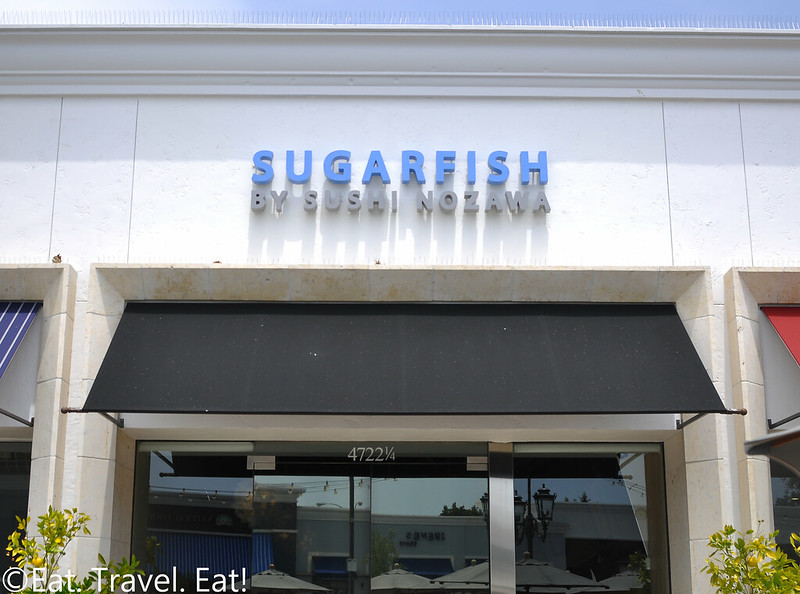 Such accessibility means that there are no sushi chefs or sushi bar viewable to the customers; rather, all the sushi is prepared in the kitchen and presented on tempo when one is ready to receive more food. Inside, it is sleek, and the menu is simplified-- although there are a la carte sushi, handroll, sashimi, and drink options, almost everyone, according to the menu and our server, orders one of the three Trust Me's: Trust Me Lite (17 USD), Trust Me (25 USD), and Nozawa Trust Me (35 USD). For simplicity's sake, we ordered one of each. 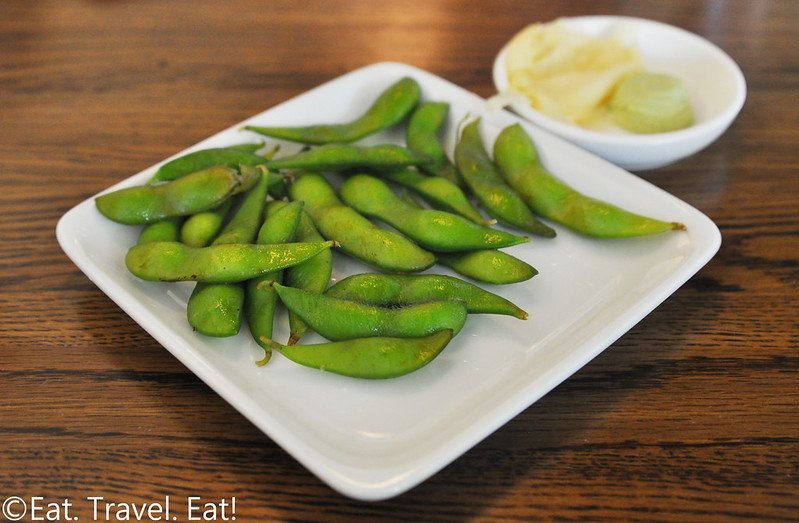 As such, we began with plates of organic edamame (2.50 USD), which were also presented with the sushi ginger (gari) and wasabi that we would be able to use later in the meal, alongside a small ceramic container of soy sauce.

These edamame were cooked in saltwater, and thus were nicely seasoned, and each of the green soybeans inside the pods were pleasantly chewy and well cooked. 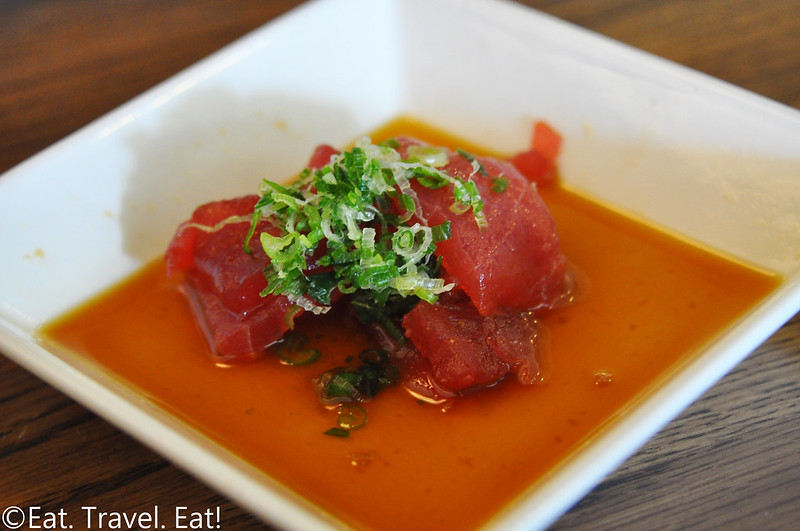 We then moved onto plates of Tuna Sashimi (7.50 USD). Here, we had multiple slices of big eye tuna covered with house made ponzu sauce and very thinly sliced green onion. The clean, meaty tuna was nicely accented with the crisp green onions and the citrusy and salty ponzu.

After finishing up the tuna sashimi, our sushi courses began arriving. Here was the entire Trust Me Lite sushi selection, consisting of one piece of sweet shrimp, salmon, and albacore tuna respectively. 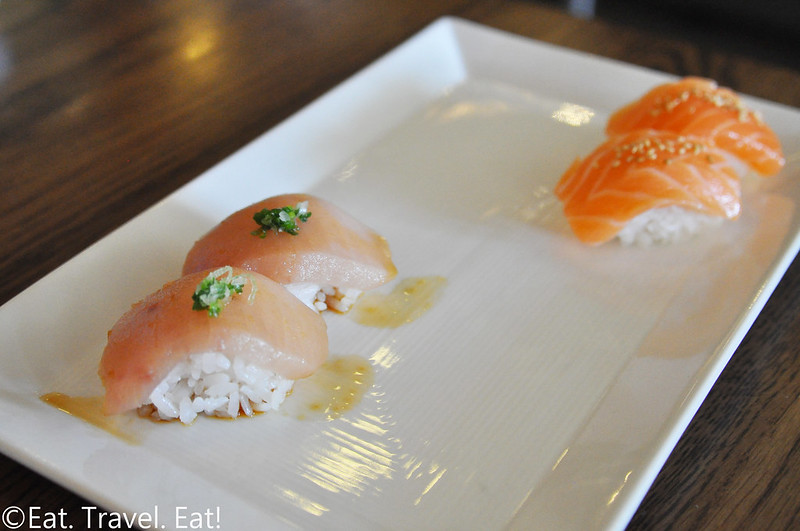 Meanwhile, for the Trust Me and Nozawa Trust Me, two pieces each of albacore and salmon arrived. 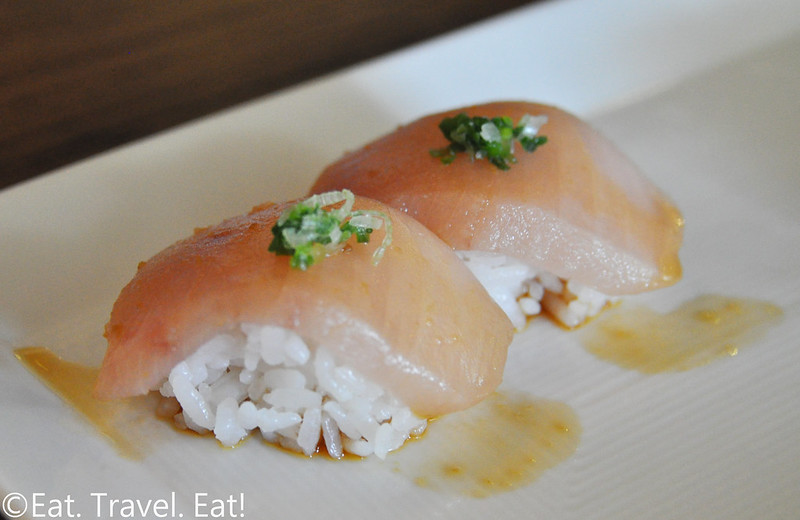 It's important to note that Nozawa claims to eat the sushi immediately after it is placed at the table, for each piece of sushi was made just in time for you to enjoy it at the table. Doing so allows you to experience the temperature contrast between the very warm sushi rice and the cooler piece of sushi on top.

The albacore sushi (5.25 USD) were served simply as is (no searing on the edges), and dressed with the same ponzu sauce and green onion on top. This was heavier in flavor versus the first tuna sashimi course, and the albacore simply melted in our mouths along with the rice when bit into.

A Nozawa specialty is to have the rice loosely packed, and in this case it did help with that melt in the mouth feeling. It did make the sushi hard to handle, however, but the small pieces remedied that a little bit--these were truly one bite morsels. 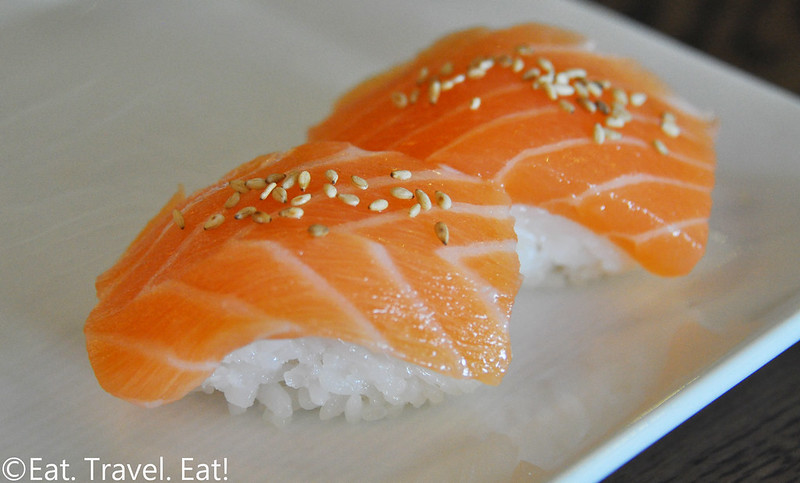 Meanwhile, the salmon pieces (5.25 USD) were velvety, fatty, and intrinsically oily, with the sesame seeds providing some additional nuttiness. A little bit of added wasabi and soy also benefited the fish. 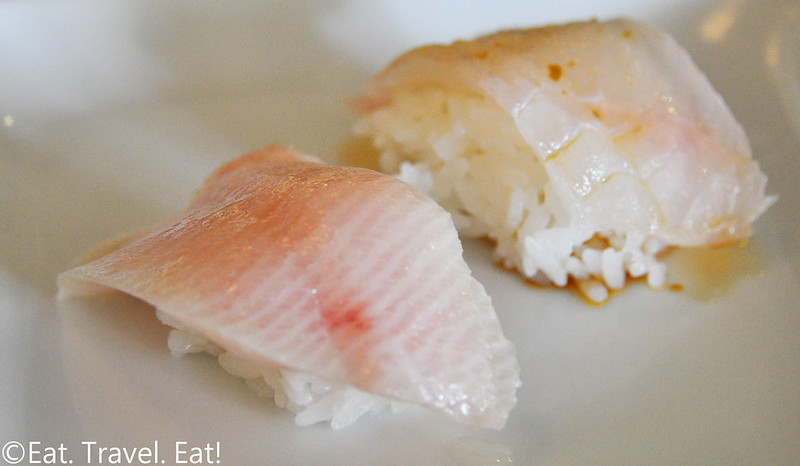 After finishing the first course of sushi, for the Trust Me, one piece of yellowtail and halibut came to the table. 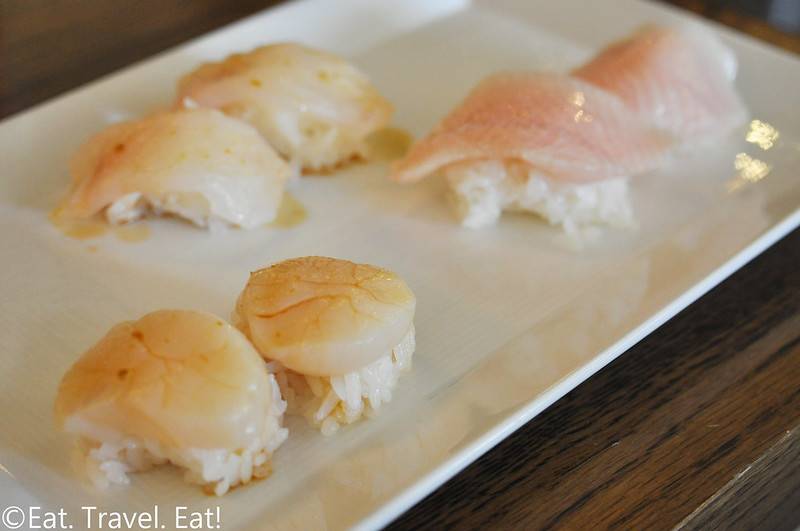 And for the Nozawa Trust Me, two pieces each of the daily special (large scallop), halibut, and yellowtail sushi came together on one platter. 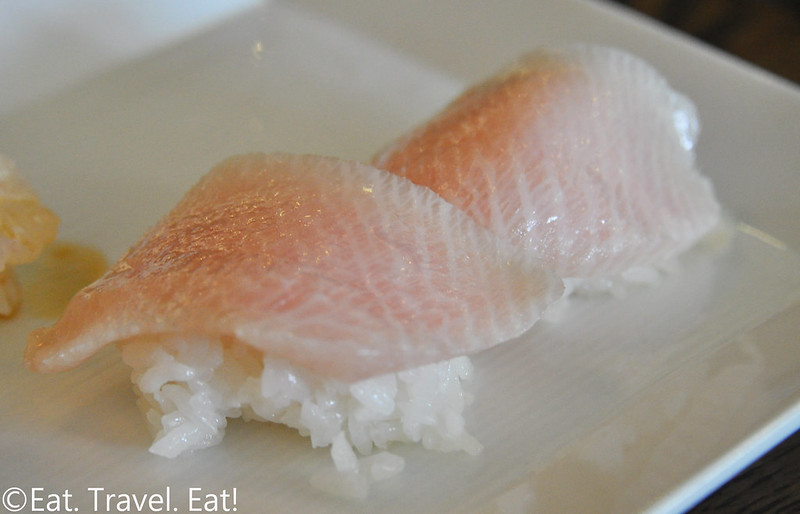 The yellowtail (5.75 USD) was full bodied and nicely marbled, and went well along with a little bit of soy and wasabi. 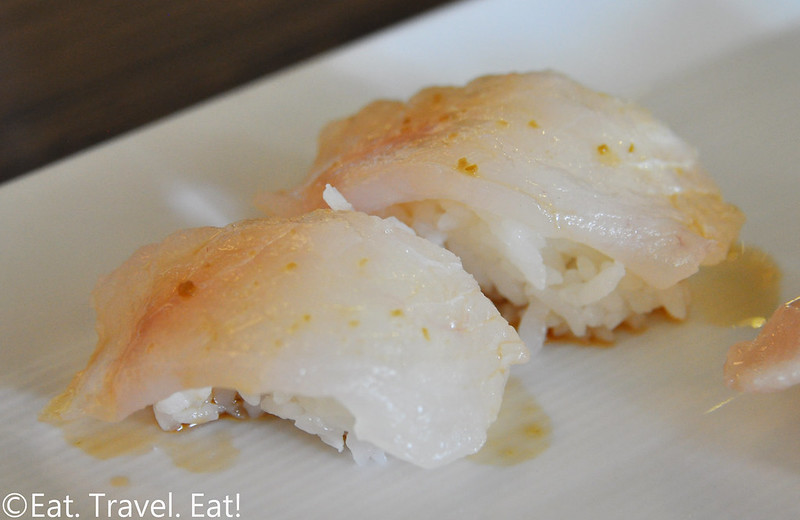 Meanwhile, the halibut (5.75 USD) was very clean and was brightened with the applied yuzu ponzu, which provided a lot of additional flavor. 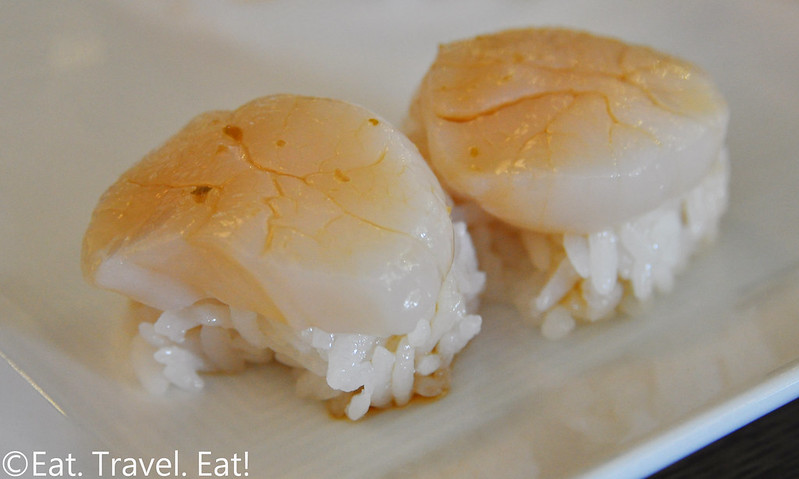 And the daily special of large scallops (instead of small bay scallops) was creamy, sweet, and briny, with the yuzu ponzu providing some brightness to the scallop. 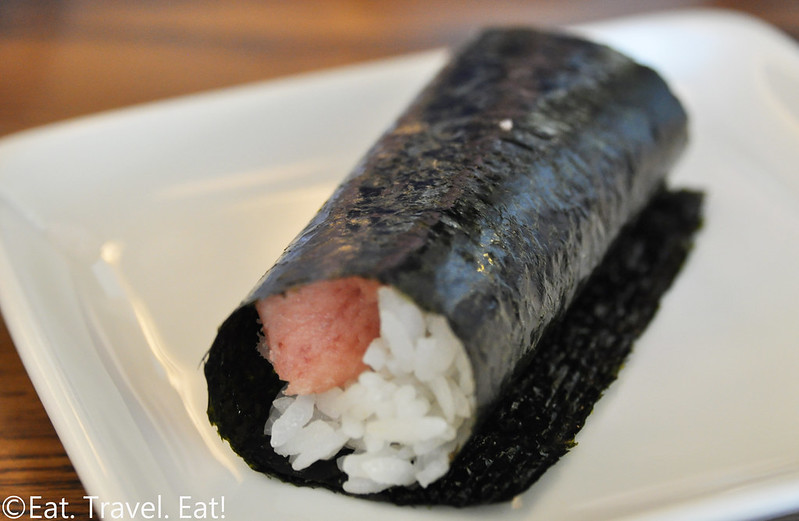 One Toro Tuna Hand Roll (4.75 USD) for the Trust Me Lite arrived at the same time as the 2nd sushi course for the other two Trust Mes, and two more followed after we finished up the 2nd sushi course. Here, we could see the care put into making each handroll-- the seaweed was extremely fragrant and crisp, while the rice was still warm, and the mashed up toro was creamy and very soft. 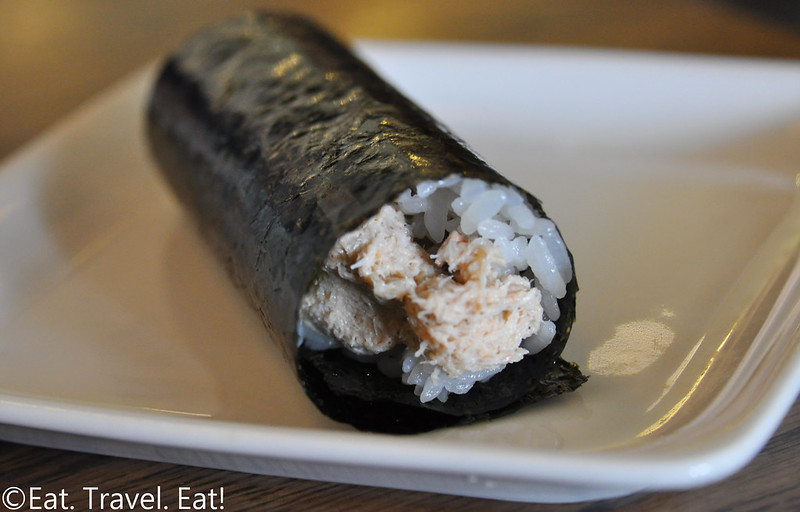 The last course for the Trust Me and Nozawa Trust Me, the Blue Crab Hand Roll (4.50 USD)--a signature item of Nozawa's, was equally impressive, with the briny, creamy, sweet crab mixture pairing well with the warm rice and crisp and fragrant seaweed.

Sugarfish was an intriguing experience-- receiving sushi at the table in small courses for one to enjoy the freshness, just in time preparation of each item, quality ingredients, and a modern atmosphere. The restaurant policies are well laid out, and the food is simple so that one gets to focus closely on the taste and textures.