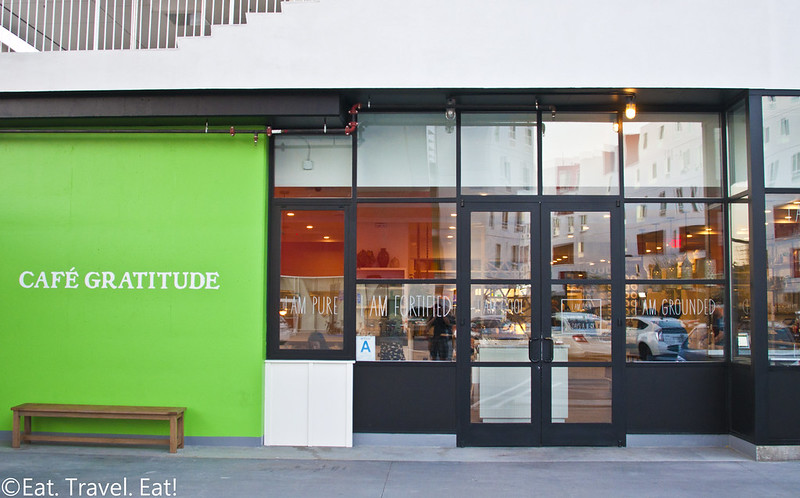 We've greatly enjoyed our past visits to Larchmont's Cafe Gratitude, and so we were glad to hear that Cafe Gratitude has also opened up in Downtown's Art District--making a for a shorter drive to enjoy their creative vegan and organic foods. 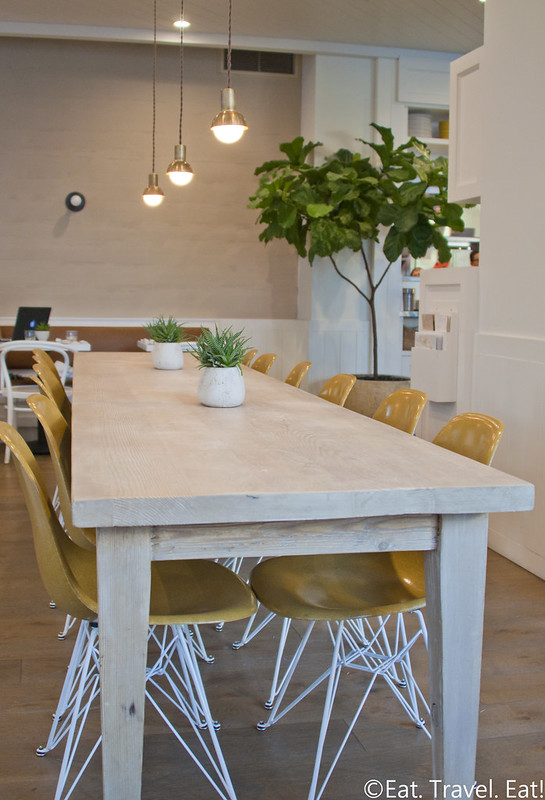 The Arts District location takes more of a light colored approach (instead of an emphasis on turquoise), with white chairs and benches, grey walls, yellow chairs, green plants, and woods throughout the entire location. It's also much larger than the Larchmont location--we made reservations, given Cafe Gratitude's general popularity and dineLA, but found out that the restaurant was less than half full when we entered.

Unlike some of the Yelp reviews about this location, service was great right from the moment we entered the restaurant. We were happily guided to our table, our waiters noted the dineLA menu and dinner specials, checked up on us to make sure we were ready to order (took a while given the many options!), and noted their "question of the day," for which our visit was, "What inspires you?" 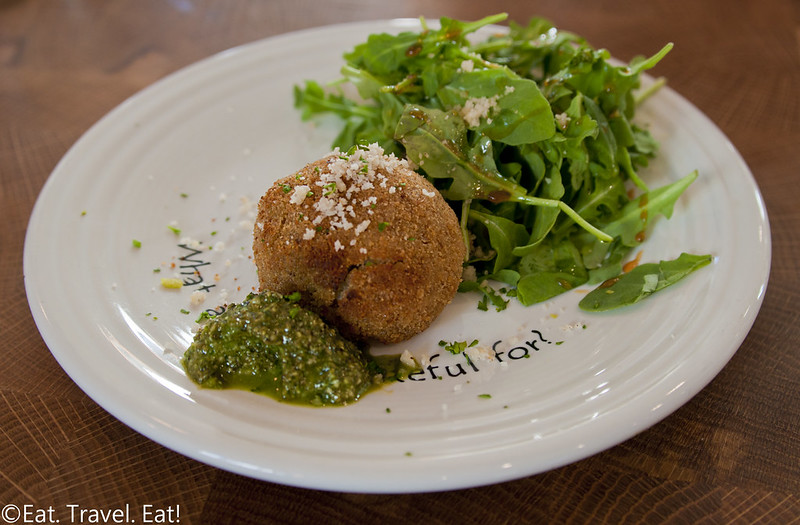 We started with some appetizers that came with the dineLA dinner menu, which offered a choice of appetizer, entree, and dessert for 30 USD. I ordered the Flourishing (normally 8 USD, 5 USD extra for an additional arancine), a braised asparagus arancine composed of arborio rice, braised asparagus, cashew mozzarella, gremolata (lemon zest, garlic, parsley), and a side of basil hempseed pesto oil and arugula. This was very pleasant, with the warm arancine being crisp on the outside and creamy on the inside, scented with lemon and spices, and with tender pieces of asparagus. Its richness was supplanted by the verdant pesto and arugula, which was very lightly bitter and dressed with a sweeter savory dressing and topped with some salty brazil nut parmesan. I didn't miss any of the dairy that would have been in the dish! 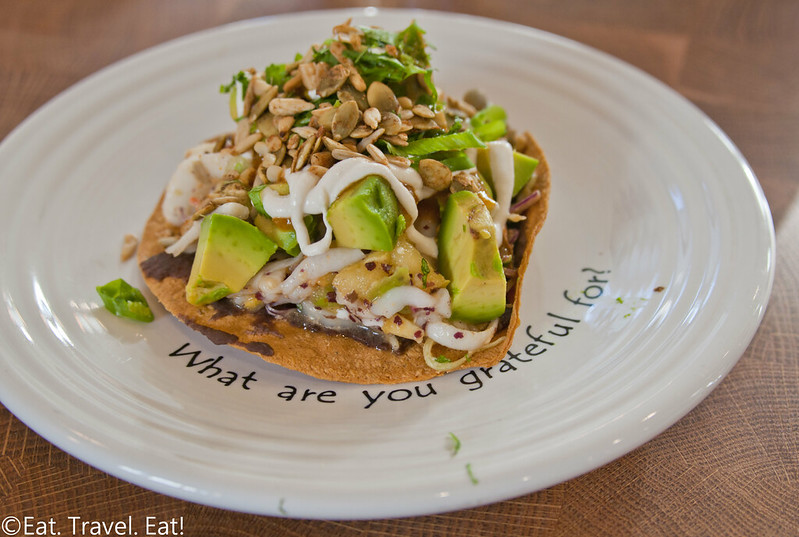 The other appetizer we had was a coconut ceviche tostada named Yo Soy Feliz (normally 1 for 8 USD, 2 for 14 USD). Starting with a bed of a thin and crisp tortilla, black bean puree, coconut ceviche, mexican coleslaw, roasted tomatillo sauce, cashew queso fresco, spicy pepitas, cilantro, and avocado were added. This, like a regular ceviche, was light and refreshing, with some added creaminess coming from the queso fresco, coconut meat, and avocado. It was extremely neat to see the fresh coconut meat being used--just lightly marinated to accent its original flavors--and to see the balance between all the ingredients-- crunchy, creamy, smooth, bright, spicy all in one bite. 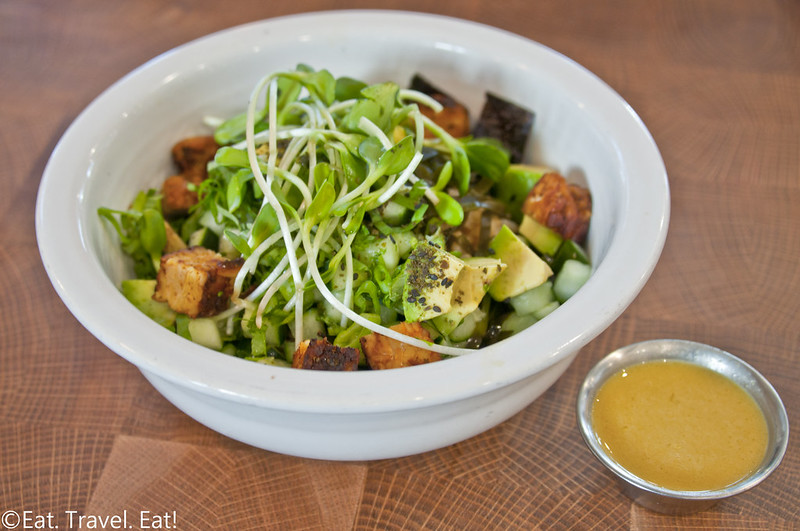 All our entrees came together on time. The DineLA's exclusive entree--Accepting-- was a sushi grain bowl with blackened tempeh, shredded kale, nori, wakame, avocado, cucumber, scallions, cilantro, basil, sprouted probiotic brown rice, gomasio (sesame seeds), sunflower sprouts, and served with a sesame wasabi dressing on the side. It was a rather light and verdant bowl-- lots of vegetables served as is, and thus the dressing and the warm tempeh and rice served a critical role in meshing everything together. 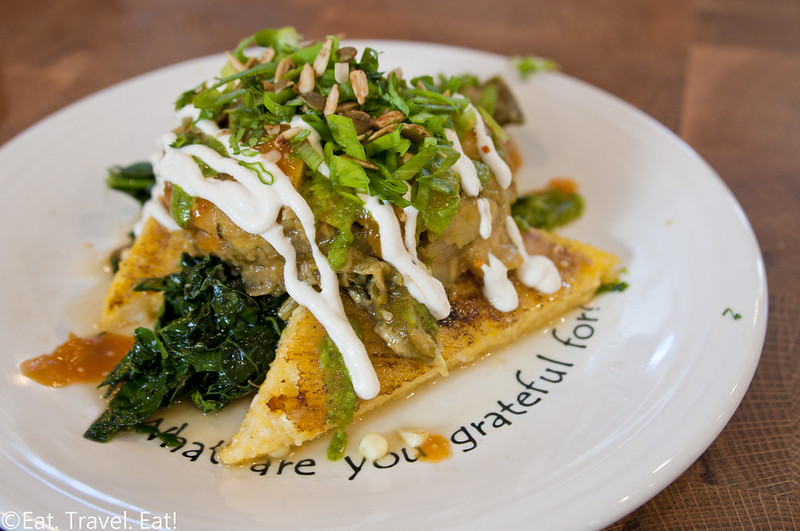 The other dineLA entree we tried was the Warm-Hearted (normally 16 USD), which featured two grilled polenta triangles with braised summer squash, sauteed kale, roasted tomatillo sauce, salsa verde, cashew queso fresco, spicy pepitas, chopped scallions, and cilantro. The polenta was quite unique--not only was it creamy on the inside and lightly crisped on the outside, it also featured white corn kernels which added additional texture contrast. Everything was nicely accentuated with each other-- creamy polenta, spicy tomatillo, salsa verde, and pepitas, creamy queso fresco, verdant kale, scallions, and cilantro, and rich, braised summer squash--this was quite delicious and filling. 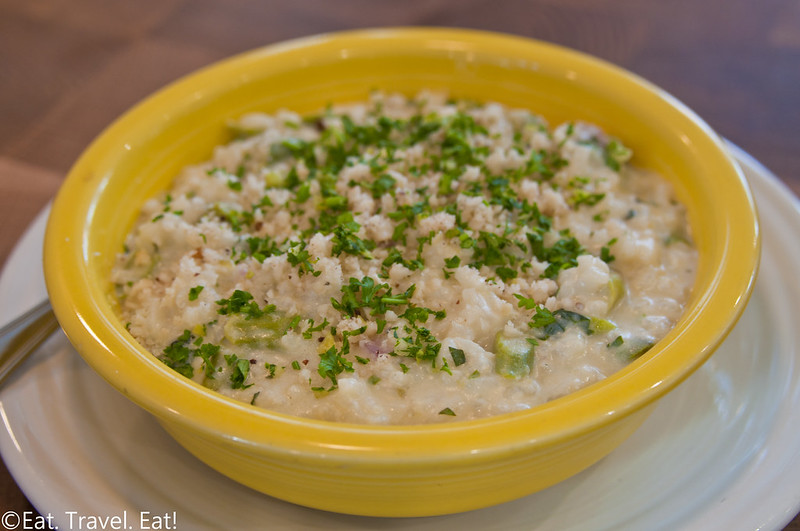 From the summer dinner specials menu was the Inspiring (13 USD), an asparagus risotto made with arborio rice, gremolata (garlic, parsley, and lemon zest), cashew creme fraiche, and brazil nut parmesan. This was like the flourishing, but in a large portion, more fluid and creamy, and with the gremolata seasoning more pronounced. In either dish, the arborio rice wasn't as rounded as in other risottos--a bit more loose, long grained than the usual. A bright, creamy, and simple dish. 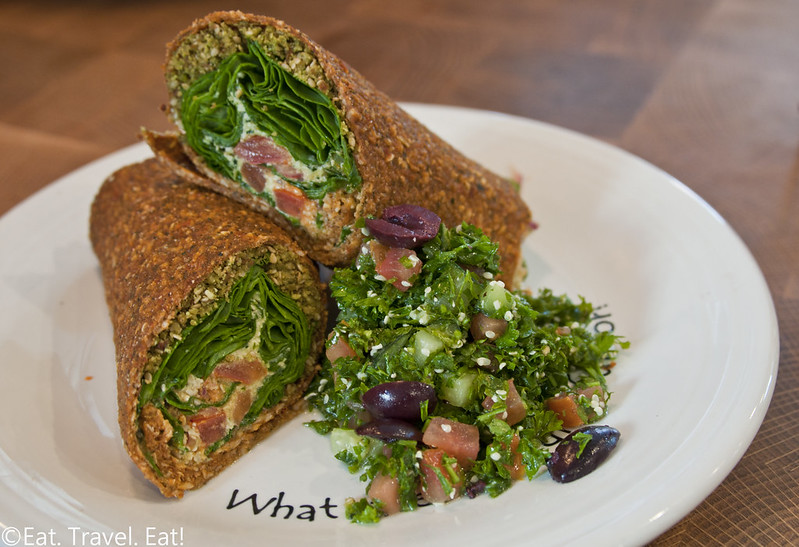 Lastly, we tried out the Happy (15 USD), a mediterranean raw wrap consisting of a sun-dried tomato wrap, raw falafels, zucchini cilantro hummus, spinach, red onion, tomato, cucumber, harissa sauce, garlic tahini dressing, and a side of hemp seed tabbouleh. This was quite flavorful, with the sauces playing a major role in binding all the various greens and mediterranean flavors together. 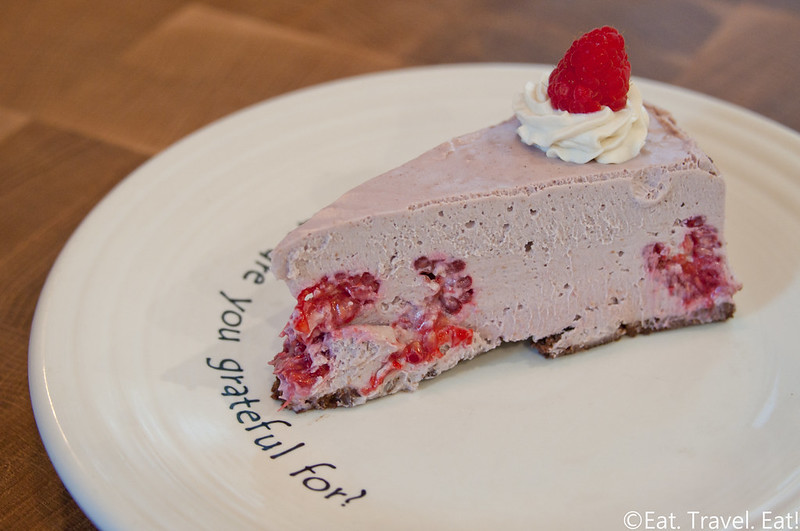 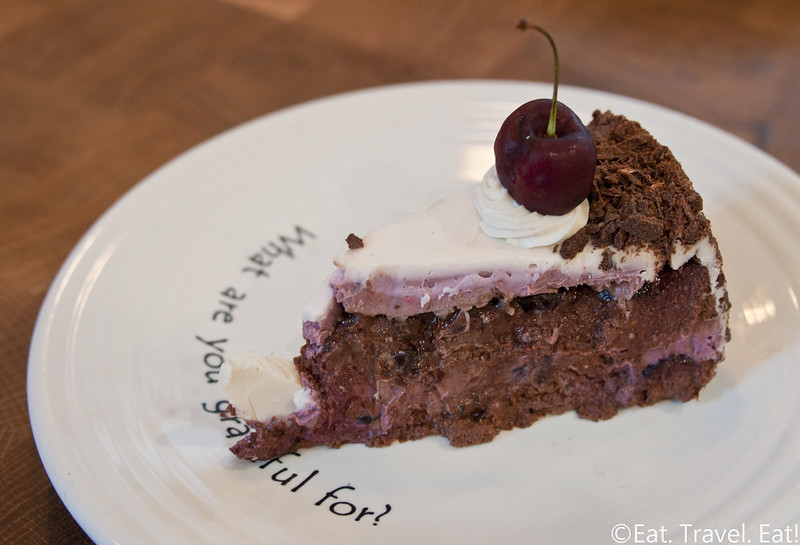 The black forest layered cake, likewise, made some alternatives for its vegan status. The cake was swapped with a sticky, cocoa flavored date paste that had a texture similar to a brownie, and was layered with cherries and cherry flavored cocoa cream. Dark chocolate, coconut cream, and a fresh cherry rounded out the dessert--very rich, and a bit on the moist side.

Overall, yet another creative and quality visit at Cafe Gratitude-- as we always feel at the end of each meal, it's great how Cafe Gratitude makes such creative dishes with their quality ingredients. And with this particular location, there is more room to do so-- more seating, and even a small market of goods are available for sale. Service was so top-notch--everyone was so happy, caring, and interested in discussing and sharing the food, and we were checked up upon throughout the entire meal. We'll be back.

Kayleigh said…
Hi Wilson! I love your food photography! I am wondering if I can use your picture of the 'Happy' Mediterranean Wrap on my blog. I would give you credit and include a link to your page. Let me know if I have your permission!

Thanks! Yes, feel free to use the picture on your blog if you haven't already.