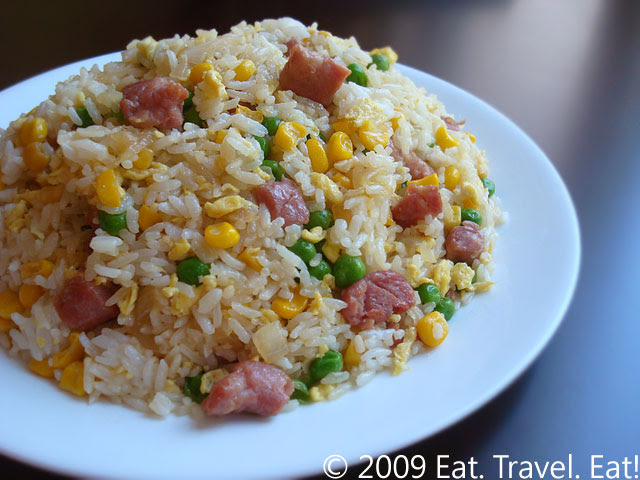 (Updated with new pictures and edited text on 27 September 2009)

No, this is not the fried rice at Sinbala which is next to places like May Mei, Changs Garden, Tutti Frutti Frozen Yogurt, and Din Tai Fung. Instead, this was made by yours truly at home. As we usually buy some Sinbala sausage ($6.50USD for a prepackaged uncooked pack at the counter) and bring them home, this was a dish we could make with things in our pantry. Nothing special was needed other than the Sinbala sausage. As long as you have eggs, veggies, meat, and rice, any fried rice is easy to make!

You see, the corn, peas, and sausage were all from the freezer, and everything else was in the pantry, except for the eggs and carrots which were in the fridge. Easy peasy for any family to do, but it takes some prep time. It's a good dish to make if you have lots of frozen veggies; just put it in there!

As for preparation, cutting everything into small pieces allows for easy eating. This dish also became my experiment if cutting frozen meat was easy. For Sinbala Sausage though, the answer was no. The casing was VERY hard to cut with the knife; it would not cut and stayed in one piece. So, my suggestion is to first cook the sausage, and then cube it. However, I still cube it frozen. If you do not like the casing in the fried rice, then throw it away after you cube the sausage. You will see the casing in a clump.

The outcome of the fried rice is that there was a various amount of textures and tastes- the slight sweetness from the garlic, sweet peas, corn, and carrot, slight mushiness from the rice, springiness from the egg, and the savory from the soy sauce and garlic salt. What a yummy dish! Probably one of the closest I have made that tastes like a restaurant's version, but without that much oil. However, this is now the only fried rice I have made with the exception of Spam fried rice. But that follows this recipe below- just substitute with Spam and add less of anything salty as Spam is very salty.

If you want to get some of the Sinbala sausage, my local one is at: 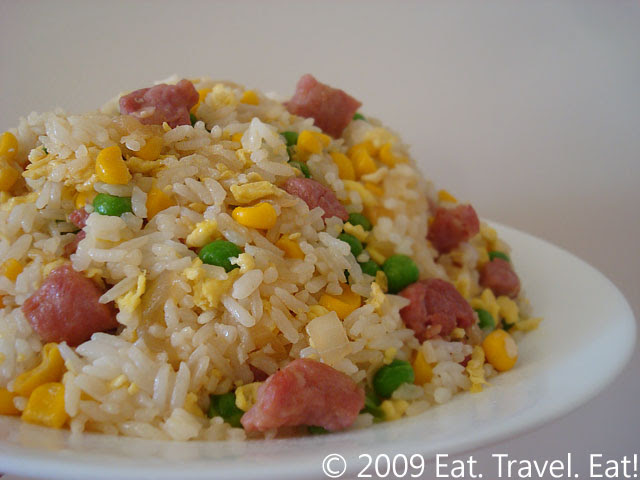 We are not done yet! Of course you are looking for the recipe. It is below:

1. Prep the ingredients! Take the frozen corn and peas out and rinse them. Cut the carrots into coins or cubes if you are using regular carrots, and cut the sausage into quarters lengthwise and then dice them. Get the eggs cracked and scrambled, and the rice cooked. You can either use leftover rice that has been in the fridge, or fresh rice with half the amount of water. I used both. Also, cut the green onions into small pieces, and mince the garlic.

2. Cook the Sinbala Sausage in your pan. If you have a nonstick pan, there is no need to add oil. Just remember to move the sausage around with a spatula. When the sides are slightly brown on the sausage, and the sausage itself has turned pink on all sides, that means it is pretty much done. When the sausage has released some of its oil when cooking, add in the garlic and saute together.

3. Add any of the uncooked vegetables (carrots and onions) into the pan and cook. After the vegetables look good to go (use the onions as a measure-they should be translucent), then add the frozen corn and peas into the pan. Then, add approximately a tablespoon's worth of soy sauce and a tablespoon's worth of garlic salt and stir the meat and veggie mixture. Lastly, now take the meat and vegetable mixture out and place into a small bowl for later use.

3. Put a little bit of the butter into the pan (half tablespoon) as well as a little bit of oil (1 tablespoon or less). Swirl the butter and oil around so that the pan is coated. Next, take the eggs and pour it into the pan from the sides of the pan, so that the egg is all over the pan- almost like if you are trying to make a large egg "crepe". Try to make the egg into as thin of a layer as possible and as soon as the edges set, break up the crepe by stirring with the spatula. This way you will make long strips of egg which will be similar to the restaurants.

6. Then add the green onions. Again, stir everything around for another minute or so, and you are ready to plate!

7. Add some green onions on top for garnish (if you want to). 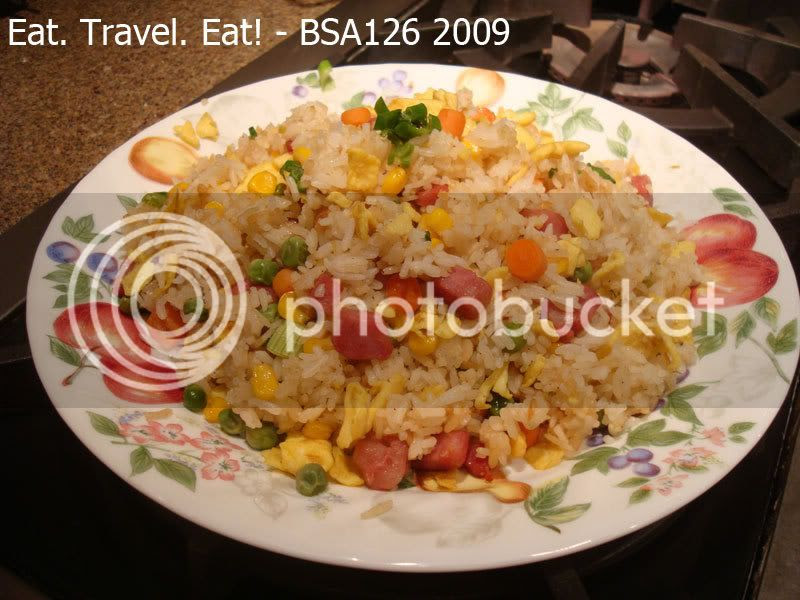 (My old photo which before I thought looked pretty! However, it had too many flaws, like the overcooked looking peas)

joanh said…
mmm! that looks good.. do you like tomato fried rice? you can try it with ketchup too.. hahah
September 29, 2009

SinoSoul said…
If you like Sinbala's sausage, I implore you to try the stuff from Quan Tran next time you're further down South...
October 05, 2009