February 27, 2009
In case if you haven't noticed already, Fresh and Easy is one of the newer supermarkets in California and other states in the United States. One of their locations, well, was in Arcadia even when it just started out. Now, why? Arcadia won't get you that much customers as compared to Las Vegas, Seattle, or neighboring cities like Pasadena, San Gabriel, or Alhambra.

Well, Vons, which we never ever went back to after some horrible employees which did their job with no enthusiasm at all, had closed down. So, Fresh and Easy came. For months, as we drove around, we pondered what it would be. I guessed it would be like a farmers market due to the name. Was I right? Half-half. More of a mix of a conventional supermarket and more upmarket ones like Trader Joes.

We visited near the first few days of opening and well, definitely liked it. There was a streamlined feel that was like markets we visited in Britain (which their "owner" is from). Each product had a great packaging which was simple, and made you feel like it was going to be of high quality compared to some other supermarkets where their own products look so unappetizing and unprofessional that you wouldn't want to buy it. Would this work though?

Customers didn't come in for many months- the parking lot area for Fresh and Easy was empty, with only about 5-8 cars whenever we passed by.

But, recently, especially in last summer (2008), customers started to trickle. Coupons of 5 dollars off and 6 dollars off constantly came to the mail. It was not long until students and families started to be drinking from a Fresh and Easy water bottle (well...their water costs the least in the area), and the parking lot started to get at least half full.

And it was not long when we also dumped neighboring supermarket Ralphs out of our shopping places to visit. Ms. Cashier said we could get a refund on eggs the next day, as we forgot to bring our rewards card. But, after a quick thought, we knew we would not take the chance, after we almost left the entry door. After coming back, Ms. Cashier forgot about what she said and even lied to us that she never said what she said only a minute ago. Nearby customers snickered, and so did the employees. Of course though, we got our refund :).

So, that leaves only Fresh and Easy left in the big 3 supermarkets on Foothill Blvd in the stretch of Arcadia. And recently, they have been doing a lot of fun stuff.

Special "today's special" items are constantly available. Instead of putting the today special items right next to full priced items, they put all of them into one dedicated section. At night, tons flock to this area.

What else? Tons of much lower prices, and lots of newer products. It's hard to find a place where you can get milk for the same price at Costco. And it looks like they charge less too! 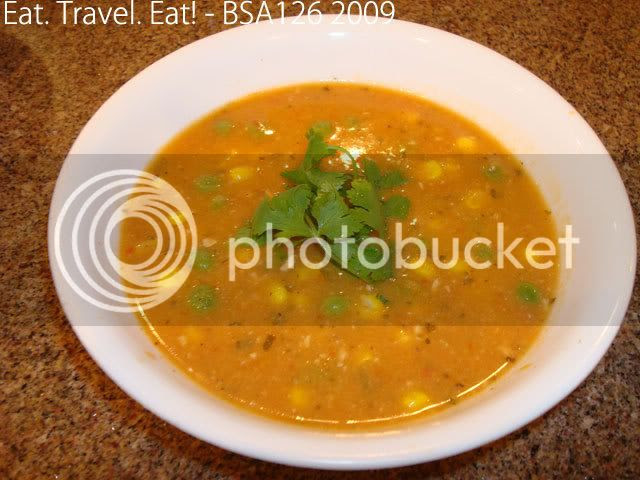 One of the promos they have is for soup. 2.50 for a "fresh from the kitchen" soup which is in the refridgerated section. It used to cost more, but the bowls were taller.

So, when strolling around recently, we got this soup. To our horror though, we found that the dates for the soup varied highly. The ones in front (obviously) were due on March 2. The ones in the far far back were March 15. You know which one we got :).

Unlike what they say to do with the soup, I heated it in a pot with water with a one to one ratio, or slightly less with the water. I mainly eyeballed it. The soup was so thick it was very gloopy when it was cold. Then, I added a bit of frozen corn to make it like CPK's tortilla soup, and then green beans because I wanted to!

The finished product was really good- hearty, spicy (even when I diluted it already!- more like a mild spicy, but after getting a couple sips, you don't feel it much), and very tasty. The tomatoes and the other vegetables gave the soup a great thickness, and the corn added sweetness. Only negative? The chicken, which was dry. Luckily, there were not too many.

Overall, pretty good again! Another soup that F&E has that is good is the wild mushroom soup which has many types of mushrooms, but I haven't seen it in a while.

shavedicesundays said…
So funny we posted on Fresh & Easy in the same week. I am so happy about the milk because we always end up with leftover milk when we buy two gallons at Costco.
March 03, 2009

It is such a coincidence! Never would have expected it here too. I am also happy about the milk at F&E since now we can get good milk without driving far away, and Fresh and Easy is even cheaper! Double win win situation here for us.
March 03, 2009