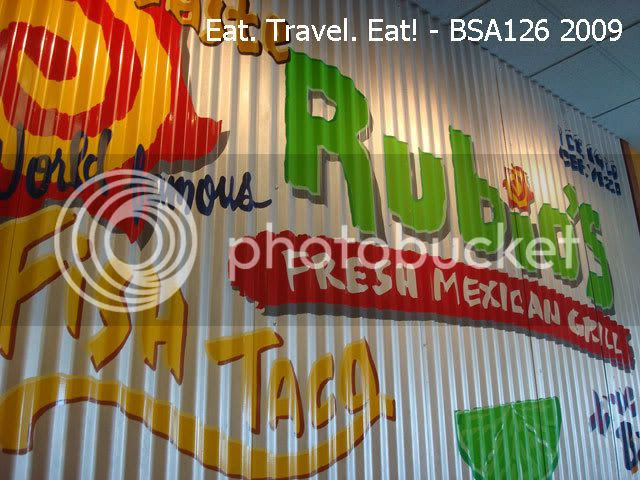 There is nothing more interesting when your brand name is written in huge letters across a metal wall. And this is what happened in Rubios in Monrovia.

We managed to try out this place after going to the Pasadena location for 2 times already. It seems like both locations have minor differences in the food actually. But what is the big difference? You already just saw one. It is the crazy interior of this place. 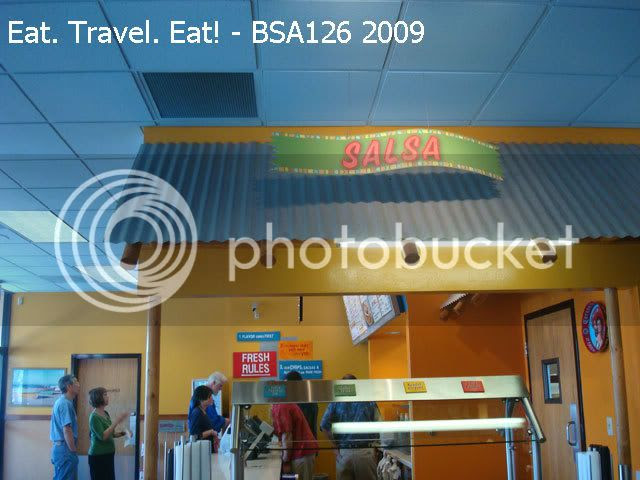 The cash register is nothing that crazy, but have you seen such a big sign for salsa? And look at that blue roof thing. Interesting is the word. The salsas though are not chunky- more like blended to become more like a thin sauce. 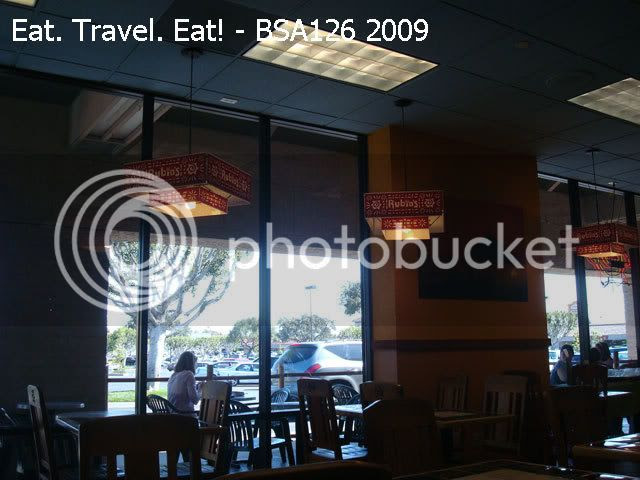 And of course, there is the Rubios lights on top of the tables, which have tile and wood on them. Colorful, but probably hard to clean if something gets stuck on the grout portion of the tables. 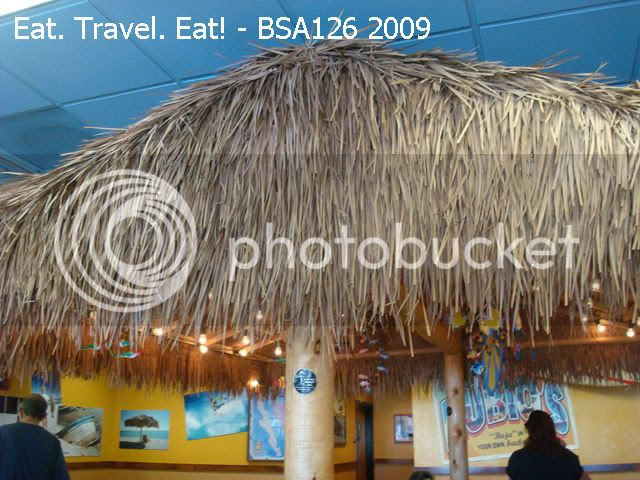 But the craziest thing of all, is this. A vast wooden hut. Inside the hut there are lots of festive lights too. Haven't seen stuff like this in any fast food place ever before. 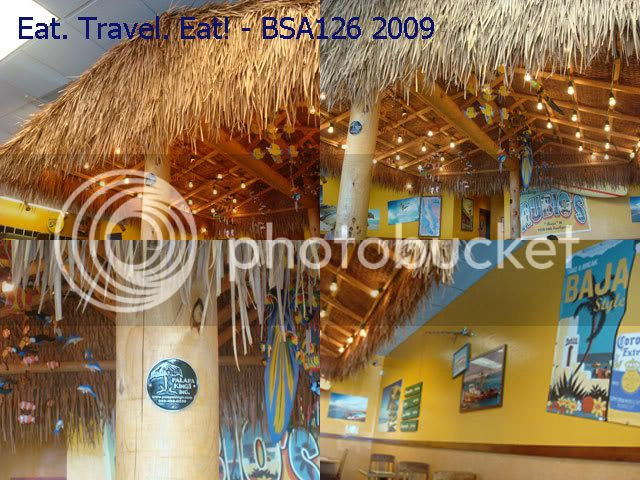 The hut manages even to put the manufacturer's name on it, as well as putting festive lights and plastic animals. And on the side of the walls nearby are lots of Mexico related signs as well as marketing for Rubios. Again, interesting. Not everywhere does this either. It's not often where somewhere wants you to really "get into the mood" when you really...well, can't!

But the food, you ask. Is it good at all? Our verdict? Okay, but there are too many fillers. Such as TONS of cabbage. You barely can even taste the fish! And for a regular day price, it really isn't that great of a deal. Tuesdays are better, with the fish tacos only costing $1.25. 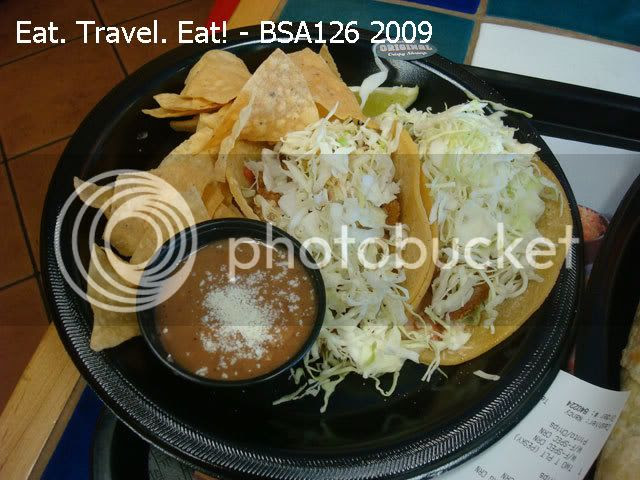 One of the specials happening is the crispy shrimp and fish taco combo for our area. The fish taco, which I have tried before, has a crisp exterior and a tender interior. There is also some white sauce as well. Problem? Too much cabbage on top! You can't taste the fish that much in these tacos. In Ensenada we didnt get that much cabbage. Just a bit was enough.

The crispy shrimp was decidedly ordinary. They were just mini shrimp that had a crisp batter, and then filled up with the other toppings on top. At least you could taste the shrimp flavor; some places have shrimp that just taste like water!

This combo also came with a free drink. Rubios uses Coco Cola for their soda machines on a side note. This location's sodas were pretty good. They tasted like they should be, unlike Yoshinoya in Monrovia which has a bit of weird flavor according to one of our friends who eat with us. Plus, since there are lemons and limes at Rubios, you can add them in :). 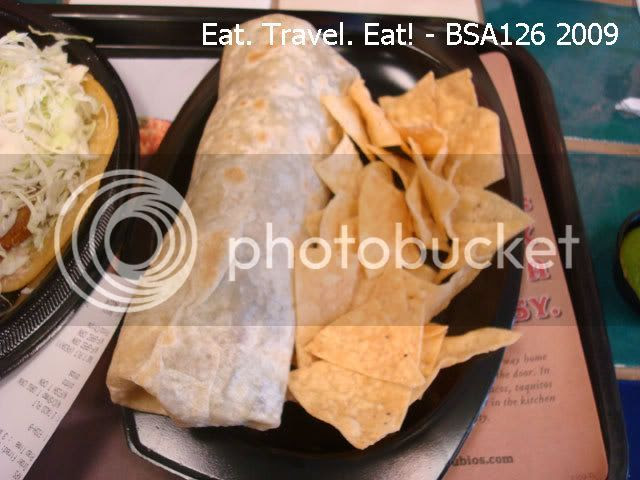 And here is the fish burrito, which the flavor didn't really go toward the fish. You tasted more of the fillers instead, which were black beans, guacamole, and other things. Not exactly photogenic either. I wanted to take a shot after I took a bite, but then the inside looked more like mush. Certainly not like Chipotle. Also, the battered fish immediately lost its crisp. I never got to experience the crisp. 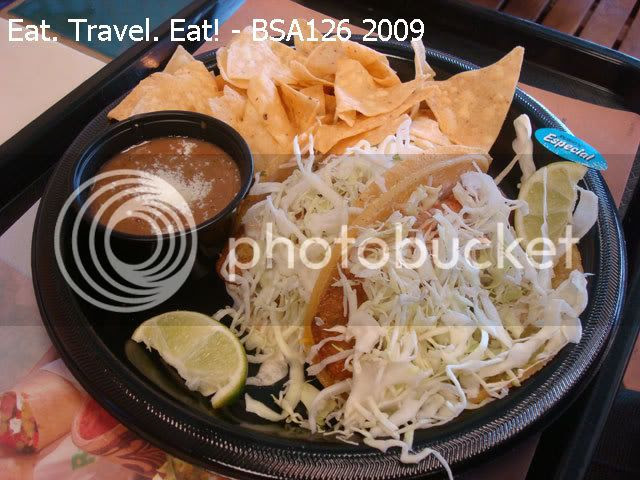 And here is the "especial" fish taco plate. The special part? They say they added some guacamole. Very little guacamole it is. We thought there was none at first, but they replied to say it was in the fish or it was lightly dredged with the guac. Hmm. I would have eaten the fish burrito instead if they said that! The fish burrito was almost the size of this whole plate.

The pinto beans on both of the taco plates were very tender and mashed up. Random thought, but if Rubios can get that texture from the beans, schools should follow on their recipe. At some schools they just use a half half of refried and pinto beans. This would be much healthier! And also, this tastes better. More flavor.

The chips that came along were warm and crisp. Like how they should be. Or what could it have become???

EatTravelEat said…
We don't eat it very often too! It's not hard to make, but if you don't want to buy the ingredients or can't find it, it is hard to eat Mexican food.
February 09, 2009

joanh said…
man, i miss Mexican food so much in Taipei that this actually looks good. Their fish tacos are actually not bad.
May 19, 2009

I can see that from reading the many posts you have written about Mexican food! Rubio's fish tacos aren't bad, but I would like to see more fish :).
May 19, 2009