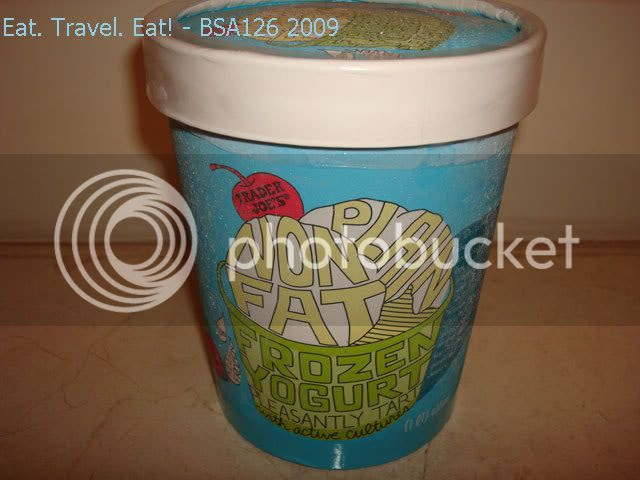 We were walking by the aisles of Trader Joe's, and noticed this. Hmm....what is it? Plain frozen yogurt which according to the package has a "pleasant" tang and is not too sweet or sour. And the cost? About a medium size Pinkberry without the toppings, which is about 3.50. Or, you could say 11 cents per ounce.

Pretty good pricing! As you see here, it is a quarts worth of frozen yogurt. Which translates to 32 fluid ounces. If you were at a Yogurtland, that same amount of yogurt would cost: $9.60. And if you were at Cherry on Top with the buy 10 ounce get 10 ounce free coupon, the same amount would cost $8.58.

After about 15 minutes from the store, we opened the delightful package of frozen yogurt, and found it ROCK solid. Could it be because Trader Joe's freezers are just so cold? Anyway, we were able to scoop it. With a lot of effort, that is. 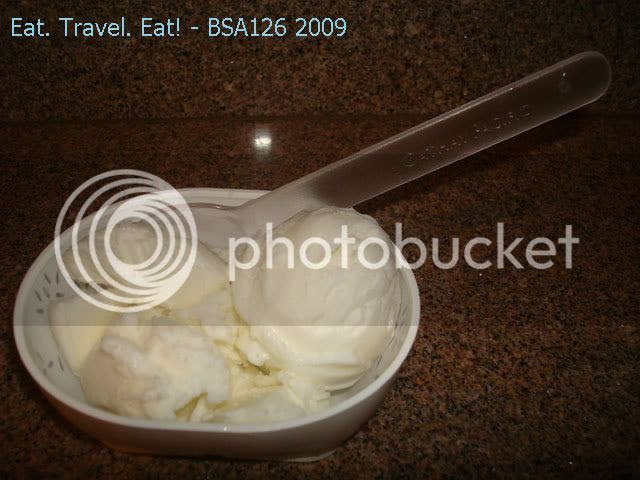 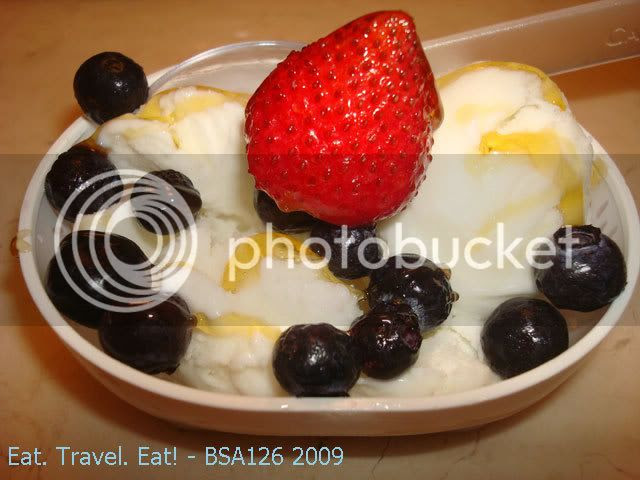 With a strawberry, blueberries, and a drizzle of honey.


Then, we took photos and decorated the yogurt with some frozen fruit (some blueberries and strawberries) and a bit of honey, which took about 3 minutes. And it was still hard! No melting occurred yet still! And the honey got frozen so it was really like candy.

It was only about another 5 minutes from that when the yogurt started to get not as stiff. And, to make it more "soft serve", we stirred the frozen yogurt for about 10 times around the bowl so it kind of looked like a very thick frosting. At this stage, the yogurt would have a firm peak to it too.

How was the taste? Well, in the hard stage, the frozen yogurt had a good tang which was not too tangy, but not too sweet. It also had a nice creaminess. And in the "soft serve" stage, you could taste even more creaminess and the full flavors of the yogurt could be tasted very well.

Overall? A good product, but just a tad bit too thick and creamy. If you are going to buy the product, remember to let it sit out of the freezer for some time or else you are going to have some trouble scooping! Also, being not soft serve in the beginning, the texture of the yogurt and the denseness is also heavier than soft serve.

-EDIT Feb. 11, 2009: After putting it in the freezer for more than 24 hours, the frozen yogurt was not ultra hard anymore like it used to be. It was just like scooping regular ice cream, but slightly harder.

-Mini celebration. This is the 50th post on this blog! Including the indexes :).

Don't have a Trader Joe's nearby? Well, Fresh & Easy has a very similar (could be the same) version, my review can be reached HERE.


And 15 seconds of fame:
WBUR 90.9 Public Radio Kitchen in Boston says this review is "great" as part of their Tuesday Tidbits.

Thanks! For us, we have a bit too much yogurt in the house :). Regular yogurt plus this. And we just ate some frozen yogurt too!
February 09, 2009

Amanda (Two Boos Who Eat) said…
I want to find that yogurt at my Trader Joe's! Look fabulous!
February 11, 2009

Thanks for visiting! We found this yogurt at the ice cream/frozen foods section at the Monrovia location...which apparently seems to be their distribution site too!
February 11, 2009

tigerfish said…
Is that ice-cream? :p

Must be a new product cos I never seen it before in the past on TJ's shelves.
February 12, 2009

Haha, it does looks like regular ice cream! The ripples were created by the hardness of the yogurt when we got it. Now, it is pretty much all smooth looking.

I think it is a pretty new product too. If I haven't noticed it until this month...it must be something new!
February 12, 2009

Diana said…
I saw this at TJ's the other day and was curious, but worried it would end up being like their plain soy creamy vanilla (which, as it turns out, is repulsive and not at all like their amazing soy creamy cherry chip and soy creamy vanilla mango). Thanks for the review -- I'll definitely have to try it sometime soon!
March 31, 2009

I, on the other hand, was wondering about the soy frozen treats! I've seen them many times at TJ's, but am not sure how they taste. Thanks for your insight!
March 31, 2009

Anonymous said…
Ugh- I used to love this yogurt, going through two quarts a week... but they must have changed the recipe or something because now it's almost inedible to me!
August 28, 2010

EatTravelEat said…
Anonymous,
Hopefully the one you had was just a bad batch and future ones will be good! :)
August 28, 2010

Unknown said…
I just bought this yogurt for the first time this week and was very skeptical. I Love it!!!! Today I melted it in the microwave for 20 seconds and mixed it up to make a milkshake. I added peanut butter and yum!! This is one of my new favorite trader joe items for sure. When I found this post I had to share how amazing this stuff is!
December 13, 2010

EatTravelEat said…
Erin,
Sure sounds like a yummy milkshake! Thanks for sharing!
December 14, 2010

Anonymous said…
I am SO SAD!!! This product has apparently been discontinued. I would go through multiple containers a week of this stuff! Does anyone know of a similar product that I can buy?
February 09, 2011

Then how about checking out Fresh & Easy if you have one? Here's my review:
http://eattraveleat.blogspot.com/2010/11/fresh-easy-tart-nonfat-frozen-yogurt.html
Some other brands also have tart frozen yogurt these days too...
February 09, 2011