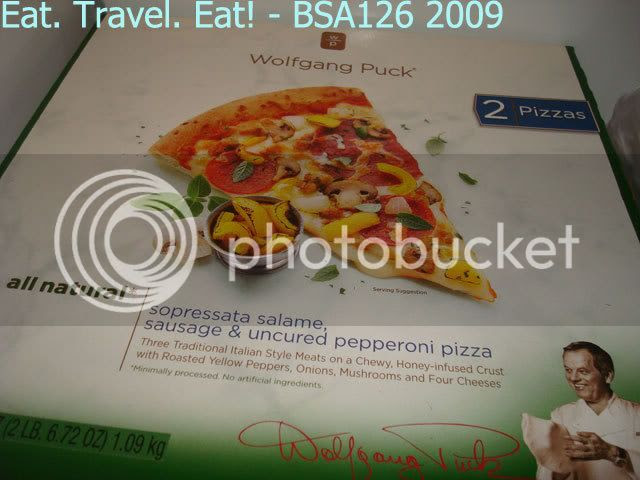 Gee, celebrity chef Wolfgang Puck also does frozen pizzas too? I knew he already sold cookware and kitchenware, as well as run restaurants, but he also has caught onto the food area. Even hotel chains use his coffee, like Doubletree Hotels.

Sopressata salame, sausage, and uncured pepperoni pizza apparently has 3 types of italian style meats on a honey infused crust with roasted yellow peppers, onions, mushrooms, and four different cheeses! And it is all natural too. Not! The mini text, if you can read it, says mimimally proccessed. No artifical ingredients. Which well, is nice. 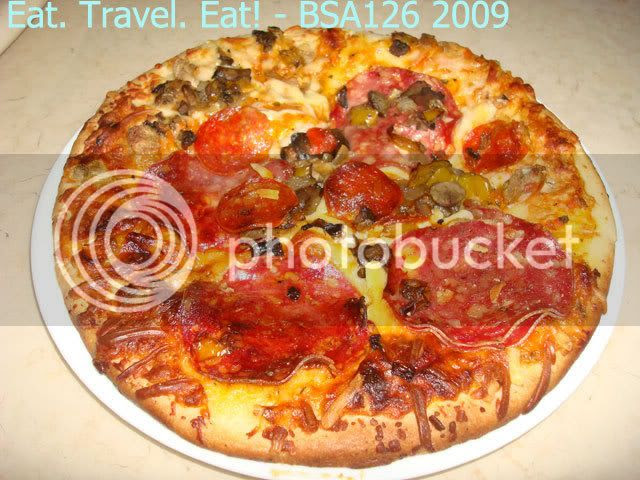 But alas, with almost every frozen food product, the outcome is not as delicious looking as the picture on the box, as the box's picture has been edited. By a lot! Well, this isn't at all. Greenish, dark yellowish. At least the crust looks appetizing! And the salami is cut into big pieces. I could have added some basil or parsley to make it look yummy, but that is a bit too much staging. Let the own product shine, right?

Now, where's the sausage? And why are the veggies only are at one part of the pizza?

Answer? The sausage is hidden below the salami for most of it. And the veggies somehow, after handling and processing, were just on half of the pizza. And yes, I did move some of the veggies around even before baking.

The taste of the pizza was pretty good. The three types of italian meats tasted like they should have, and were very flavorful and slightly spicy. However, the sausage tasted just like the pizza sausage you get from places like Pizza Hut. Nothing really "Wolfgang Puck".

Those vegetables were flavorful, even though they looked bland in the photo! But "honey infused crust" was not really that "honey infused". There was no taste of honey at all! It just tasted like regular bread.

-This product came from a warehouse store, e.g. Costco, way back then! You may still be able to get it though.

Selba said…
Oh my..... I really wish I could get a bite of that beautiful pizza!

EatTravelEat said…
Pizza is good :)! Frozen can sometimes taste really good, and this one had good meats it, and everything got pretty crispy!

I should have added a piece of parsley :). Would have looked even more appetizing!
February 12, 2009