The Palazzo 2008 Review Part 1: Introduction, Check In, and Public Spaces 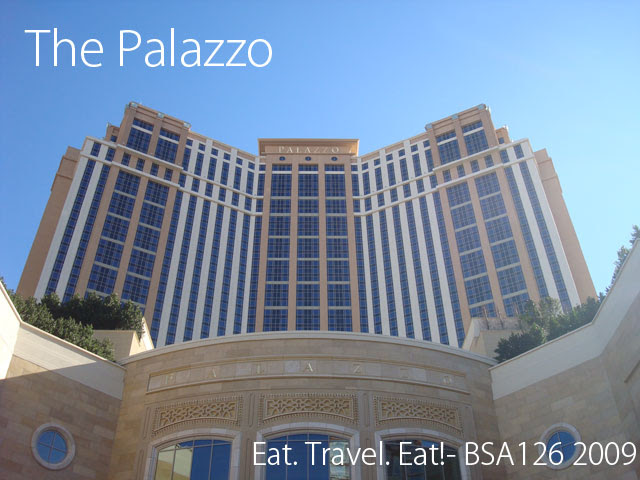 Sorry for the big delay of this portion of my Las Vegas trip! It's been four months since the trip already. Time flies...

Anyway, this portion of the Palazzo review, which will contain 3 parts, will talk about the check in process, beginning thoughts about the place, and the public spaces which we went to.
----

We've watched Palazzo grow year by year. When it first started construction, it didn't look at all like it would even fit a hotel. The land for the hotel looked ultra cramped, small, and more fit for a strip mall and not a hotel.

We were wrong. The next year we visited Vegas, the building was topped off, looking very tall in the Las Vegas skyline. And then, a few months later, it opened. We visited it, finding it to be pretty interesting. However, many shops were closed, and the service was spotty. The employees didn't seem too happy about their job. When I enquired if I could get a pen (I collect hotel pens :) ), the person didn't seem very happy about giving me one. It seemed like this place would be like our terrible Venetian visit if we ever even stayed here.

But, we were willing to give a chance. After reading many reviews on the Palazzo and seeing actual travelers photos, we decided to give it a shot for our winter trip. After all, there was a special going on which offered many different coupons. Why not go? Our friends were going to stay at the Venetian. We would stay here. The ultimate comparison contest? Probably.

Our stay at the Palazzo started after eating another great lunch at Yunnan Garden, and checking out from the Mirage, which we stayed in for the first 2 nights of our trip. (The Palazzo would be our last night in Vegas...also being Christmas day!) We went back to the Strip via Spring Mountain Road, and then we approached the intersection of the front entry. Tip here: DO NOT go through this front entry at Las Vegas Boulevard if you are planning to park! Go through the side street which the entrance is across the street from Wynn's Tower Suite Entrance. It will be safer for one, and it is easier to drive in.

Why? Well, when you enter into the entrance, almost immediately the road splits off to the front entry (for taxis and the like) and to the parking lot (which we did). It felt a bit unsafe driving through it. What if someone switched really quickly to another side of the split?

Anyway, after we entered the underground parking lot, we found ourselves in the center ramp of the parking lot, which basically gives you access to all the levels on the parking lot. Before you go into a section of the level, there are displays which tell you how many spots are there. Luckily for us, there were many spots available. Hmm....it's Christmas. I thought there would be more people here??? 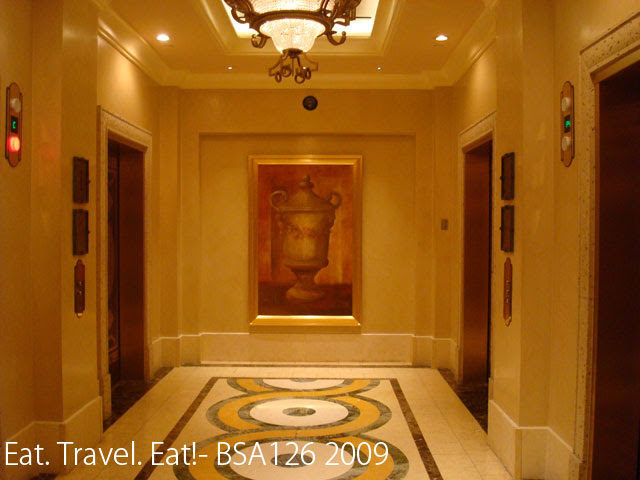 After we parked in a spot, we went to the closest elevator, which was really just a few steps away. However, entering the elevator lobby didn't feel that "high class" for a 5 Diamond resort. It felt rather cheap. Right when you entered the door, there were cards which were a "reminder"so that you would remember which level you parked in. We didn't take any. 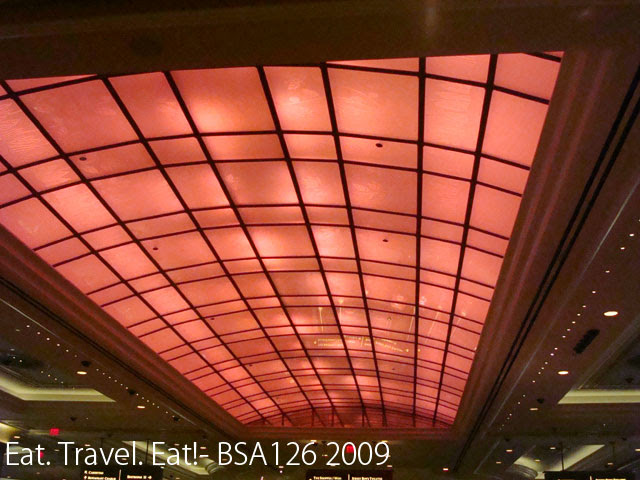 And right when we went out of the elevator, we found ourselves in the casino, which was actually pretty airy and bright compared to most casinos which are VERY dark and have not so high ceilings. On the ceiling, there were paintings that had blue and gold colors which had lots of details, as well as chandeliers. Very high end. Plus, the casino wasn't smoky at all. We would find this casino to be the least smokiest casino we've ever been in. Compared to the Venetian, this is like "fresh" air. In other words, the Venetian is ultra smoky. This is not. 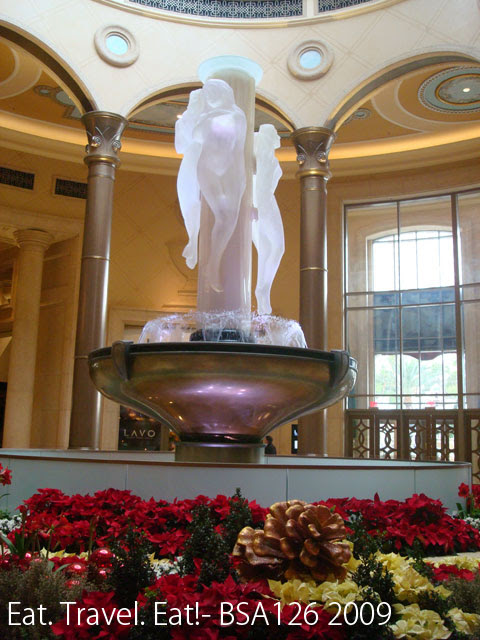 Another comparison? The lobby is VERY easy to find. In fact, it was just straight ahead from the parking elevators. Great design. In Venetian, we were instead stuck and walked for a long time until we found the lobby.

The focus (probably) of the lobby area is this statue which, in touch of the blue and gold theme, is lightly blue in color. There is a special glass dome above it which shines lots of natural light into the lobby (always a great thing). It's also a large fountain area, with lots of landscaping. Since it was the holiday season, the Palazzo put many pinecones, flowers, and the like which were in theme of holiday colors. 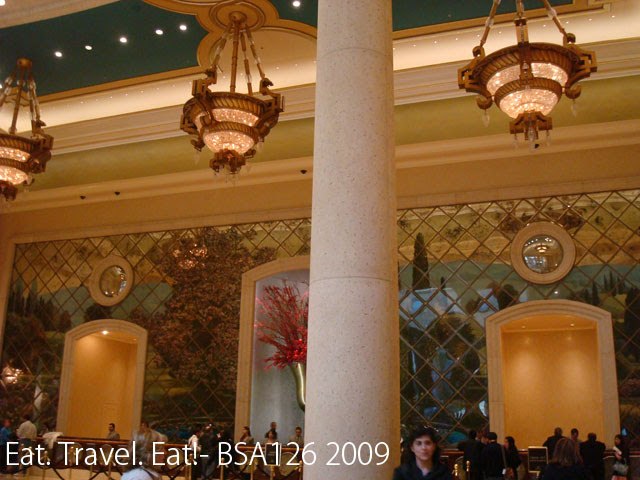 To the right of this statue (if you are coming from the back, and not the street entrance), was the check in area, which also had a very, very tall ceiling. It was lit to be very bright, unlike last year, where it looked gloomy and dark. There was a huge painting as the background, and there were also gigantic decorations. Along side were special VIP entrances and the VIP Lounge.

And armed with our Tripadvisor hat which Tripadvisor sent to us last year, we checked in. The guy was really friendly at check in and noticed our hat (obviously not saying anything about it). He said that they were "fully committed" tonight (in other word completely booked-AHA! And they were charging those last minute customers 439 a night. We got our rooms for a respectable 159 and 189 a night (the queen suites cost 30 dollars more), and said we would be getting an upgrade because the regular rooms were sold out.

JOY! JOY! JOY! And the upgrade was a two bedroom suite! The check in guy then showed us the layout in his big book with all the different kinds of rooms. Which also included many rooms we didn't even see on the internet (like a "Media" suite).

And just about when we were going to be all excited, all hopes went down.

But we didn't. What we did request for though, was a high floor. And it was given. We got the 44th floor, which basically is one of the highest floors in the whole building! YES :). Was it becuase I was wearing the hat and it really worked? (At Mirage, they only gave us the 8th floor but a good view) Or was it just what was available? Mystery unsolved...

That wasn't all though! He gave me another surprise. I'll tell you in Part 2, which is about the rooms.
----

And on to the public spaces...

The public spaces are like the casino- pretty bright and airy, with tall ceilings. It kind of has a modern and classical feel which are clashed together- it works very well though. 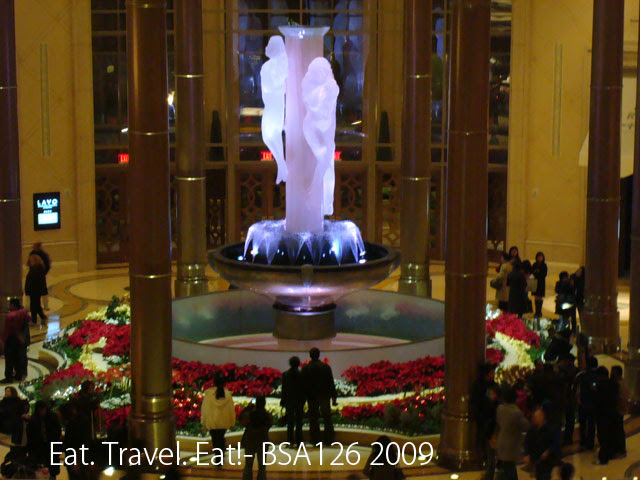 Here's how the fountain place looks at night, when you are on the second floor (the "Shoppes at the Palazzo" area). Ah...finally more people! I would think so for a full house at this place. 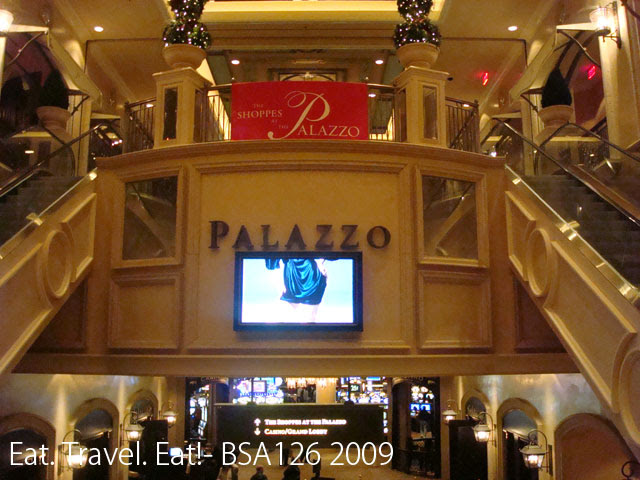 And if you entered from the street from the walkway that connects to the Wynn across the street, you would see this. The elevators go up to the shop, and if you go down, you enter the casino floor. Last year, there wasn't a TV here. It just said Palazzo and direction arrows to go to different places. 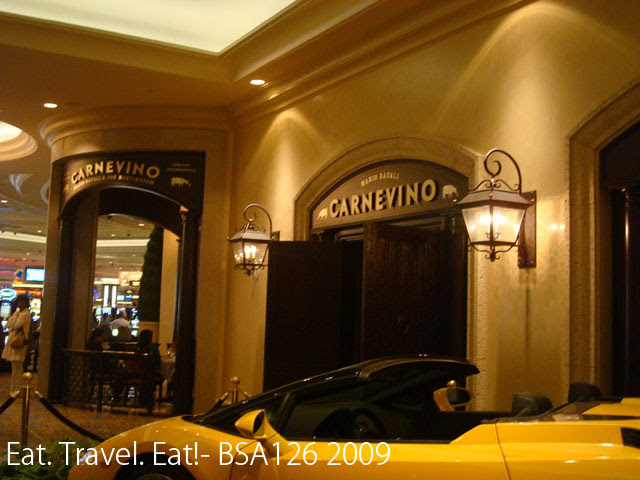 And very close to that entrance is Carnevino, which is one of the places Mrs. Rachel Ray talked about in one of her special series. And so, I snapped a photo. But what is that yellow car down there? 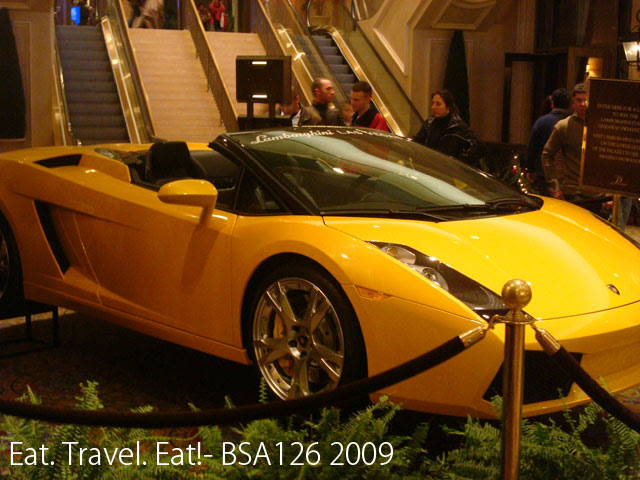 It is a Lamborghini! Unfortunately I didn't get a good shot of it. Sigh. There was a special thing with the dealer and the Palazzo at the time. 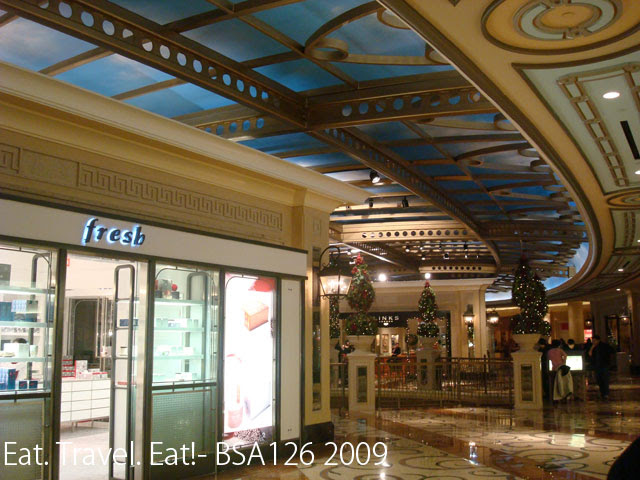 But what if you went upstairs and went to the shopping mall section? Well, the shopping mall looked like this. Again, very detailed paintings and lots of decorations! Woo, which we had a so so experience at, was also here.

Since it was the holiday season, there were also special people who had a green vine costume on and also probably were on stilts (they were VERY tall). These people would then take pictures with people, and would do fun movements. 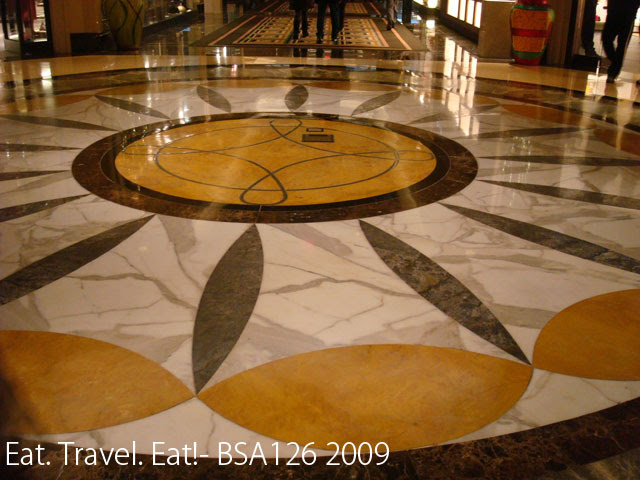 Here's another detail shot of the floor at the shopping mall section. Lots of design processes were made for this hotel! Very nice marble there :). 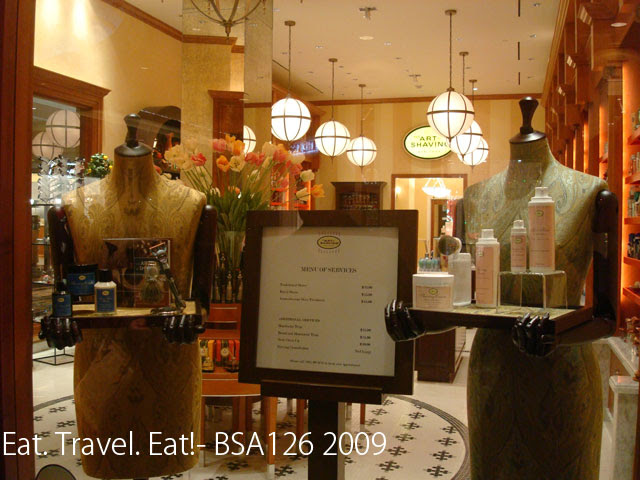 The most interesting store of all for us? This place. It's called the "Art of Shaving". And obviously, trying to act high end, they had some high end talks and words too. 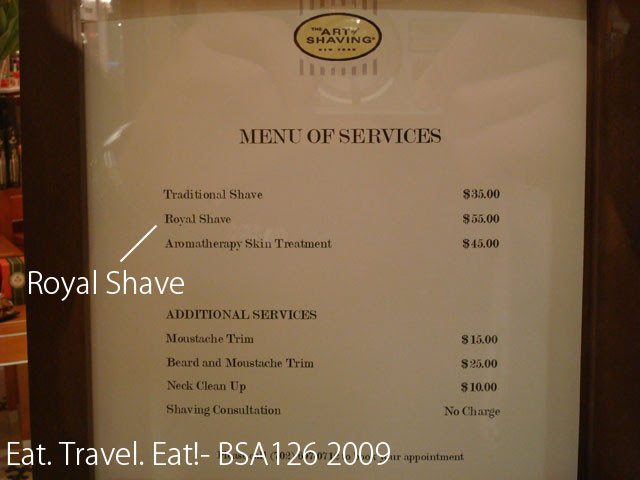 Do you see what I mean? A royal shave? A traditional shave? A "Shaving Consultation"? I haven't seen this before in any place before. Not even in Dubai. 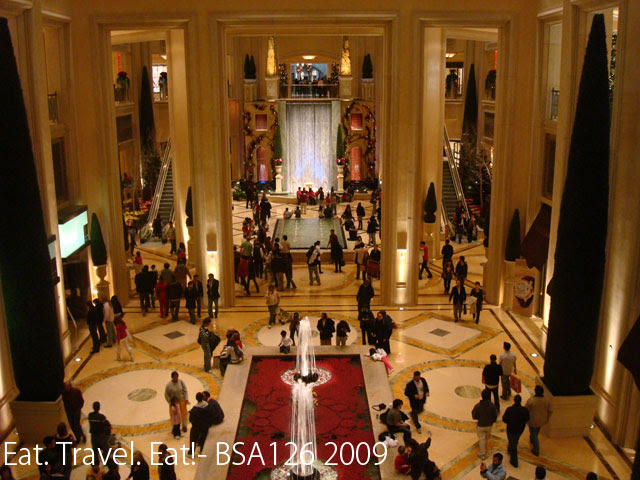 At the shopping mall level, there are also balconies where you can see things going on in the ground floor. And there are certainly some very interesting things, like this waterfall. And of course, going on with the season, there were special decorations like cranberries floating in the ponds, and big decorations on the walls. 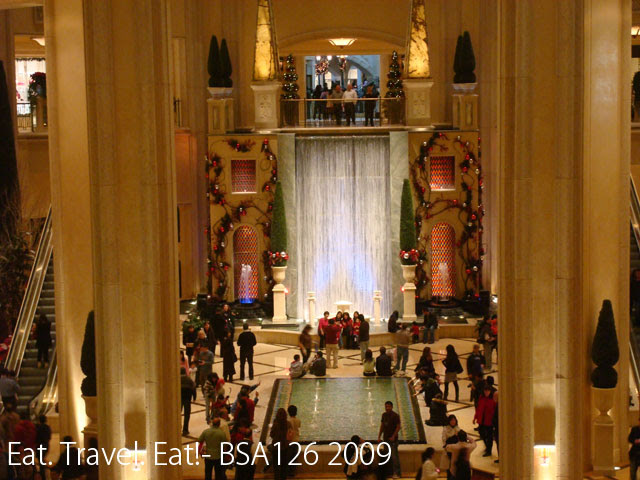 Here's a closeup shot so you can see the decorations a bit more closely. And, you'll also see how many people were attracted to this place. This waterfall seems to be one of the things which are supposed to make people interested to visit (like Bellagio's fountain show or the Mirage's volcano). 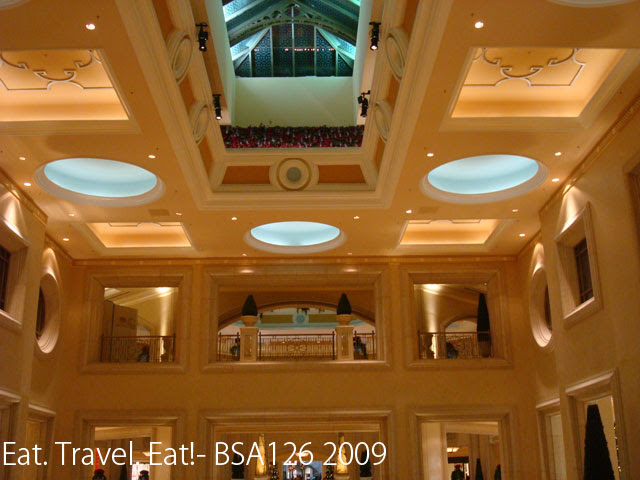 The roof is still something to talk about. The glass roofs, green, blue, and gold theme continued throughout the ground floor. 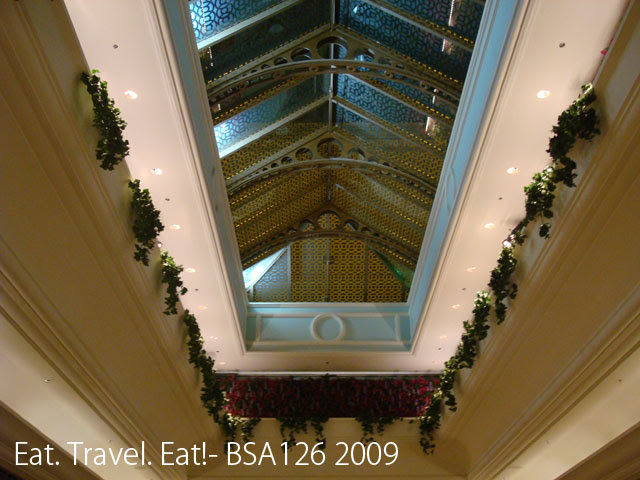 See the detail on the ceiling? Those designers were very meticulous to even put a pattern on the glass roof! Most people probably wouldn't see it easily. 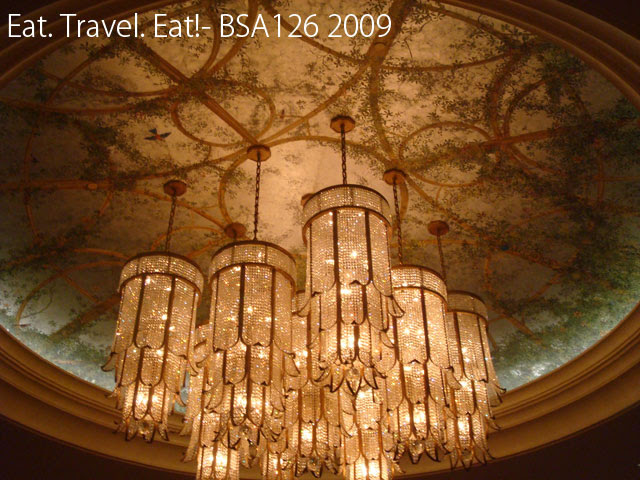 And speaking about ceilings, look at this chandelier and the detailed painting on the ceiling. This was pretty repetitive across the entire hotel as well.
Part 2 will come shortly :). And Palazzo staff, employees, and managers, I hope you have followed reading this report. Your full negatives and positives are up next.