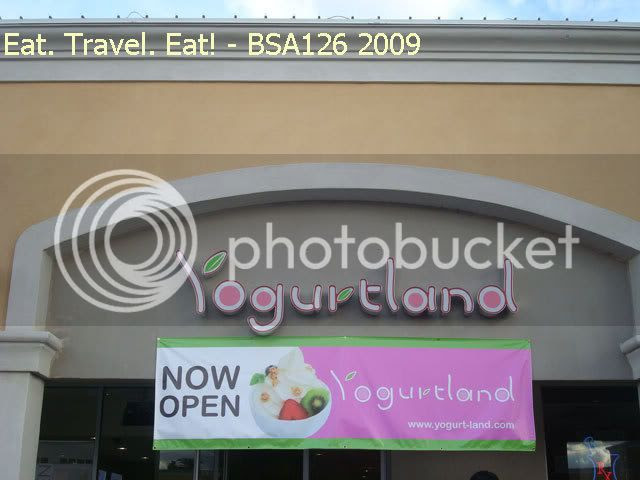 It was yet again another very hot day in Southern California. And so, we visited the Arcadia Supermarket strip mall to get some food and stuff for home. We also stopped by at Yogurtland, yet again, for another progress check.

Simply said, Yogurtland was PACKED with customers on this hot day. People who probably wouldn't even visit this strip mall at all had come to Yogurtland just for a frozen yogurt. It was packed to the brim. People were sitting at the bench they had (finally!), and some were standing indoors, eating their yogurt.

Some machines looked dirty (the mix for the yogurt was melting on some of the machines), and the toppings bar didn't look that scrumptious as usual. There was simply too many customers at the time to keep up with the demand (too little employees, not enough toppings filled up).

It was hard to even get a sample with such a line. The line was like a buffet line at maximum output. You couldn't cut in to get a sample- people were waiting in line. Only the last 3 machines you could easily get a sample. At the other machines, it was very hard to get a sample. 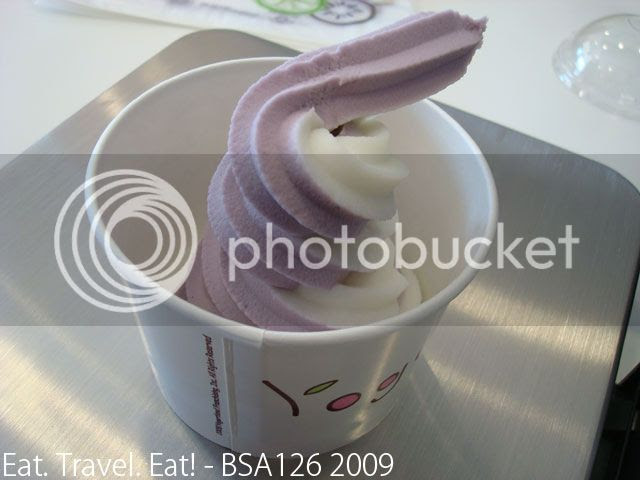 And since we didn't get to sample any new flavors due to the people there at the time, we got a regular swirl of a half half combo of blueberry and plain. I was topping it up only to when it was a peak near the top, not really caring about how much there was in the cup (still didn't seem much anyway).

But when I stopped the lever, the yogurt was stuck to the machine. It didn't make a beautiful top like what the Costco people did or what I could do if the machine was pumping a softer flavor (the tart flavors are more icy). 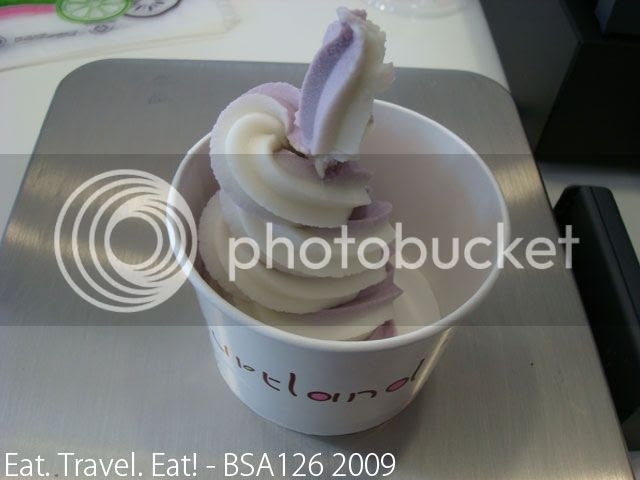 And so, we tried to make the top part stand up. Still doesn't look nice enough though! After weighing, the cost was 2.35 (a dollar more than what we paid at Costco without tax), and the cashier gave us a green biodegradable spoon.

After eating the huge cup of Costco's frozen yogurt (the post before this one), we really felt that we were getting ripped off! It didn't look to us as much (I created the pinkberry hole in the middle this time and so there should be a bit less yogurt than what it looks like), and the base of the swirl didn't even cover the whole bottom of the cup. It felt like so little yogurt compared to Costco.

Anyway, the yogurt this time was pretty good as usual. It was a bit icy and tart, but the blueberry overpowered the plain as we started to eat more and more. The plain would taste pretty boring after eating the very flavorful blueberry!

This time, we found dark blue/black specks in the blueberry. Well, that would be a bit more "normal" as Yogurtland puts blueberry juice into the blueberry yogurt, which explains why there would be a blackish speck. But, I found one mini artifical blue speck. Oh my! What are we going to do! (After 2 months of trying to contact Yogurtland, NO automatic response system or employee has even responded. Really bad customer service)

After being reminded that Costco offers the cheapest frozen yogurt recently, I don't think we'll be back at Yogurtland for some time. That is, unless, we get some incentive to go back (like a coupon).

elmomonster said…
I like Yogurtland, but man! It's becoming a downright epidemic down here in O.C. There's one on almost every block! Or at least there's a yogurt shop on every block!
April 06, 2009

It's almost the same case here! But instead, the companies decided to put their yogurt shops within a block of each other. In the same plaza as Yogurtland, there's another place that serves yogurt (and one closed down because of them), and right across the plaza (within 100 feet) is another yogurt shop with the same idea as them. And in the mall, which is about a quarter mile away, another yogurt shop is opening up soon. So much competition within a mile's worth of distance!

I believe this may end up being like Starbucks in Seattle. There's one on almost every block :).
April 06, 2009

EatTravelEat said…
Cindy,
Same here! I only started eating frozen yogurt as it was available in our area and I wanted to try it and found it to be good (and I was used to the tang due to eating yogurt at home).

Personally, I like ice cream's lighter texture though during the soft serve stage. The frozen yogurts can sometime feel a bit too rich for my taste!

And at home, I still usually eat ice cream instead of frozen yogurt. We've only had frozen yogurt twice at home, and once was a bar and the other time it was Trader Joe's plain frozen yogurt.
April 07, 2009