May 29, 2009
As I hoped, we were able to visit the mall last weekend. I decided to bump this post up, just because I am always behind posting with what is new onto this blog! I haven't even talked about our visit to Encore during its second day of opening. That was about 6 months ago. And the Promenade has been opened for several weeks already, but not everyone knows about it yet. So, not wanting to be behind, I am posting them today rather then later.

Contrary to what I had thought, the parking was STILL not enough during the weekend. When we visited during Mother's day, the new parking lot was not very full. Now? Completely filled up. Tons of cars were moving around, looking for a space to park at. Disaster. Luckily though, we found a spot, and using their escalators (or elevator if you want to), we were able to get out of the parking lot and right into the Promenade. 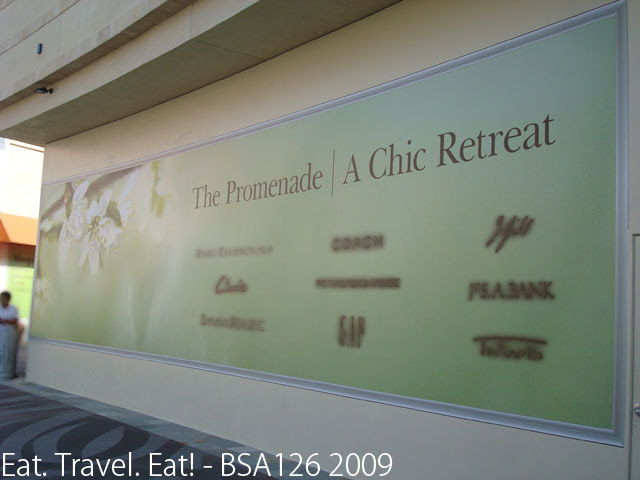 What is very interesting is that the Promenade still isn't fully completed. And so there are tons of billboards right now near the Macy's side of the project, which are advertising about new shops, such as Bose, Dolci Mango, Red Robin, et cetera, which have not been opened yet. This one advertised about the many shops available. 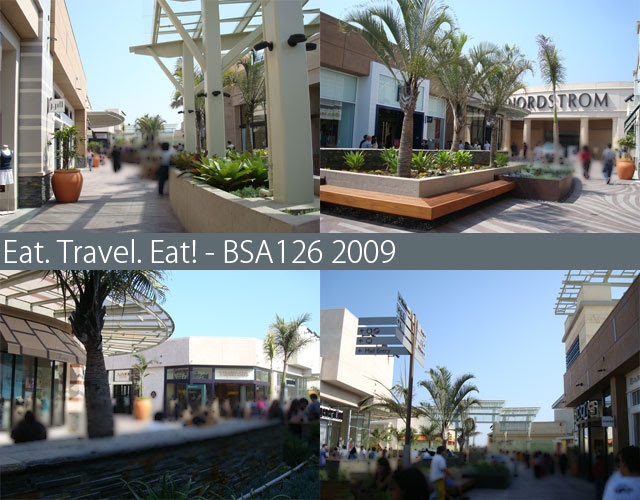 The Nordstrom's side of the project though is fully running. If you are wondering about the layout, it is basically the space between Nordstrom's and Macy's, running downward from Nordstrom. Some shops switched places from their spot in the existing mall so that they could be here. You'll find Talbots, Gap, and Williams Sonoma here now instead of their old spot in the mall. 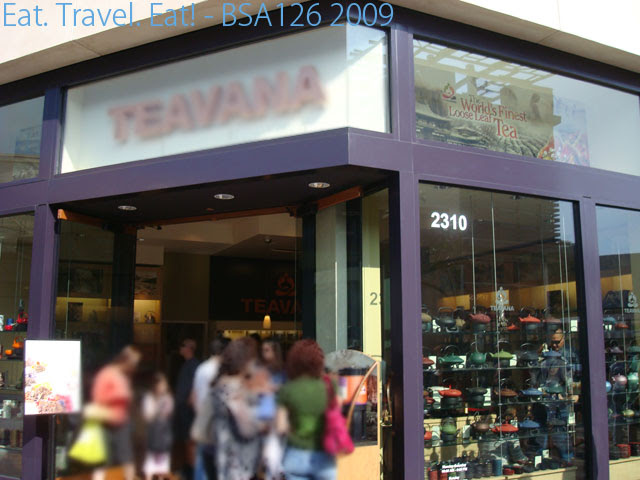 There is one shop that is particularly interesting though, and that is Teavana. I remember seeing this at the Glendale Galeria, and now it is here. It's pretty busy with free samples at the door (see the jug next to the lady with the magenta purse), but their tea is actually not as good. It seemed to be sweetened with added flavors! 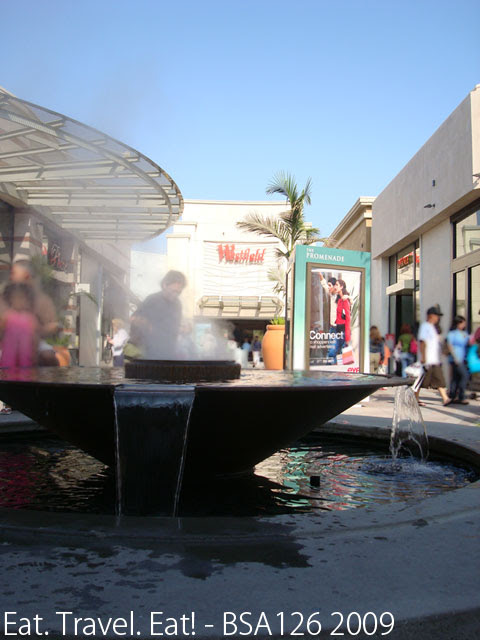 With the expansion, Westfield also attached their older entrances to the project. It makes the mall much more accessible. Plus, if you get tired of walking in the sun, you can always rush into the mall easily (or go into the sun). But what is that fountain you see there? 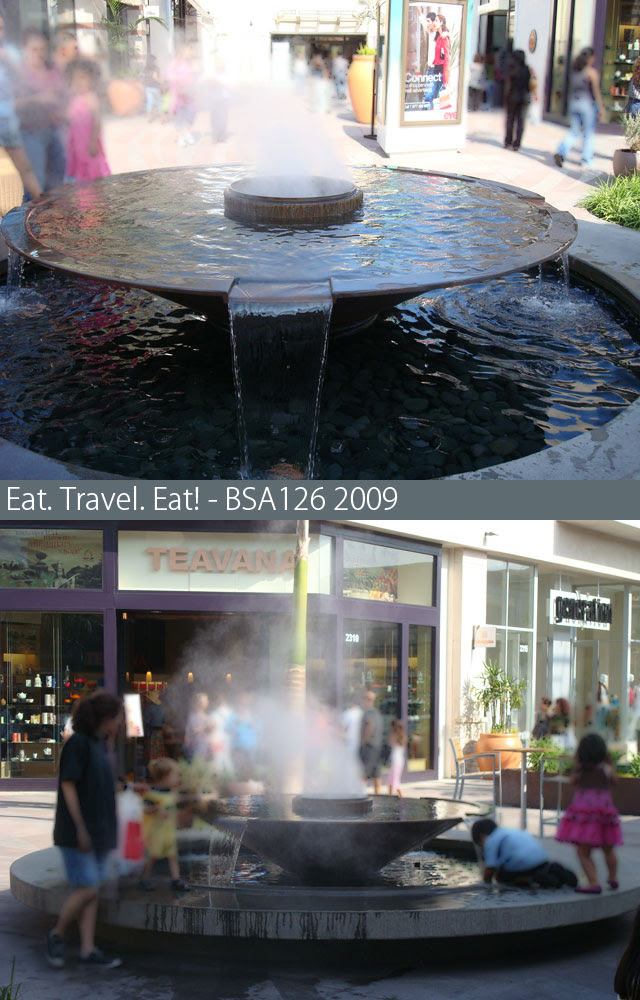 It's actually a pretty big fountain which also produces mist! And mist is a very popular attraction with kids. It also attracts many people to see the fountain. Which is why I was never able to get a shot of the fountain without any people in it. 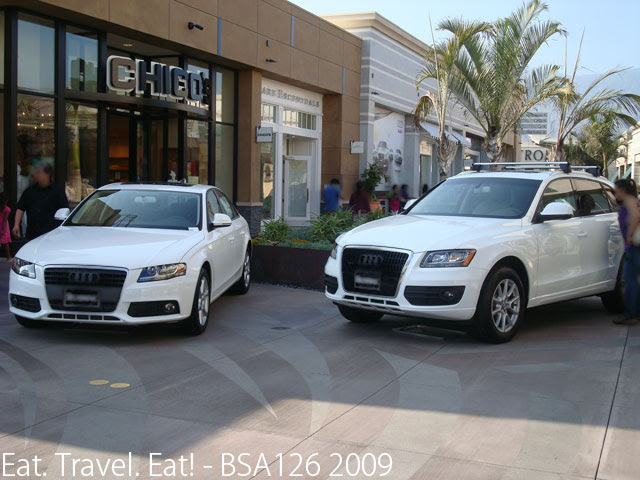 Remember what I told you about Rusnak and Audi having many ads at the mall now? Well, they also managed to put several Audi models at the Promenade. They seemed to attract many people- as I was looking around, I would hear people say things like "I love Audi's!" or "This is that car!". Haha...seemed to be a good attraction for some people. It was worth the company's expense of 700 dollars (per car I think). 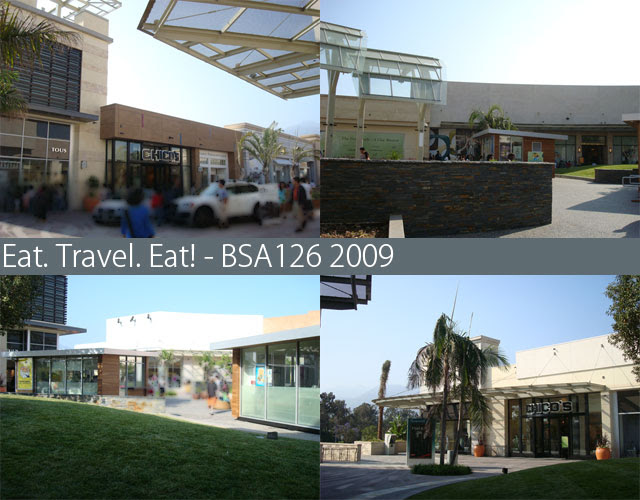 By the time you were at those two Audis displayed above, you would already be near the end of the project, which is near Macy's. This portion has many interesting things.

Photos from top left clockwise:
Left top corner- the car area. Walk a bit further and it branches out to a big circular area.
Right top corner- the round area (a portion of it)
Right bottom corner- Chicos. The project doesn't just end there. There are more stores to the outside of Chico's, which don't get too much attention as they are pretty much hidden from the walking person (you'll see those shops in a car though). There is a stopping ramp area too nearby which you could use do pick up or drop off people.
Left bottom corner- Two small stands which are fully air-conditioned. Beard Papa finally found a permanent spot (which you can go indoors to buy the cream puffs), and the Surf City smoothie place which has a location in the center of the existing mall also has a small shack (to the right of the photo).

This is also where you'll see a ton of billboards talking about the new stores. But there is also something interesting nearby, and that is some landscaping. 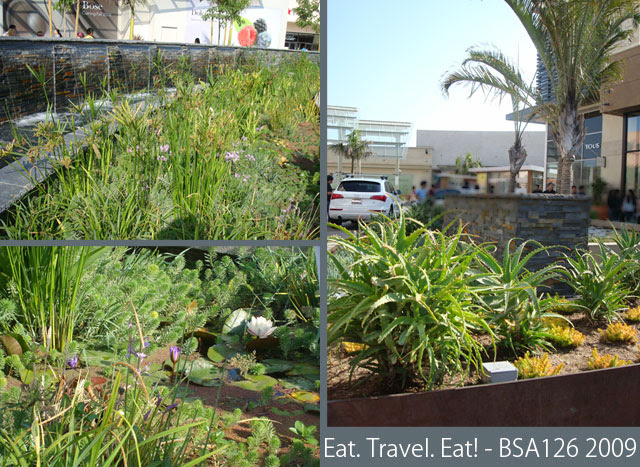 There is a another water feature near the Macy's area which you can see at the two photos to the left. Although it looks like it is all greenery which is planted, it is not! It is actually a small pond which has things like lily pads in it. I don't think there are any fish though.

Landscaping in general seems to be a bit tropical. There are tons of aloe vera plants everywhere, as well as palm trees. They do have a special plaque on who did the landscaping, but I didn't take a picture of that. 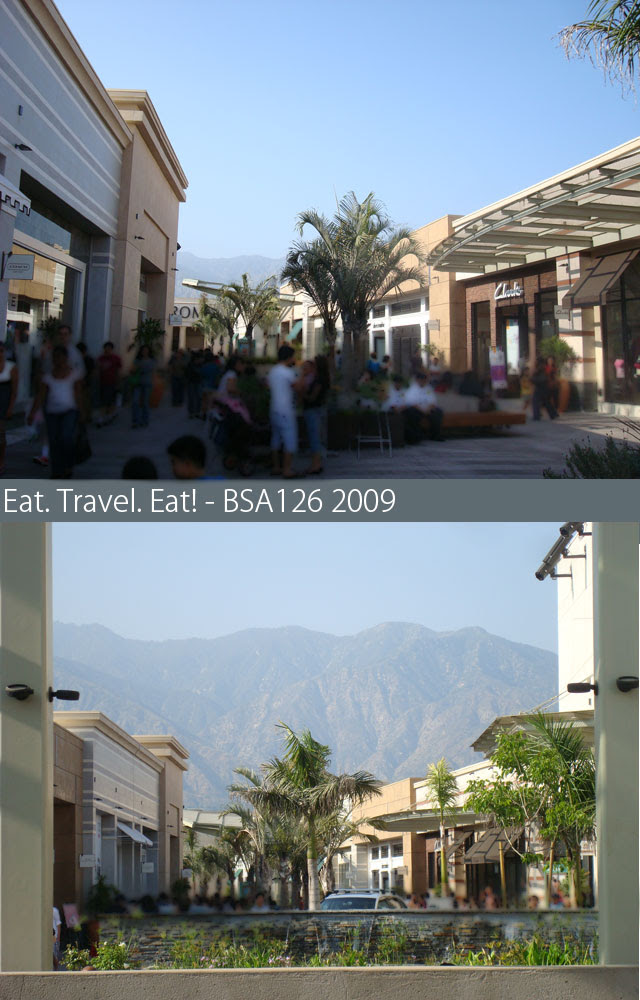 Being near the Macy's area also gives you a fantastic view of the project, as well as the mountains nearby. Do you like it?

Hope this gave some good insight on this place :). Have you been there yet? How was your experience?

shavedicesundays said…
looks really fun! Haven't been there yet, but I need to visit soon, just to take the kids to the playpark inside.
May 30, 2009

EatTravelEat said…
Selba,
Thanks! Nice sunshine for the afternoon when we visited :). Good shade.

Shavedicesundays,
The playpark is pretty nice, but not very big. It's at JcPenny which is also close to the older expansion made several years ago.

Joanh,
Certainly does! Kind of like some of the newer malls in the LA area too, like The Americana at Brand.
May 31, 2009

Rocky said…
I came to your blog just when I was surfing on this topic. I am happy that I found your blog and information I wanted.
June 05, 2009

I wonder too. Probably some big company as they are in several malls. And plus, they had the money to get the prime space right next to the fountain which attracts many people.

Must be! So many shops that used to be so far away. But we didn't purchase anything yet from the new mall expansion.

Anonymous said…
This comment has been removed by a blog administrator.
August 17, 2009

EatTravelEat said…
Anonymous,
Are you from Dolci Mango ;)?
I'm waiting for Bose to open up, as well as Ruby Tuesday. Didn't see Dolci Mango last weekend! I guess it just opened?
August 17, 2009