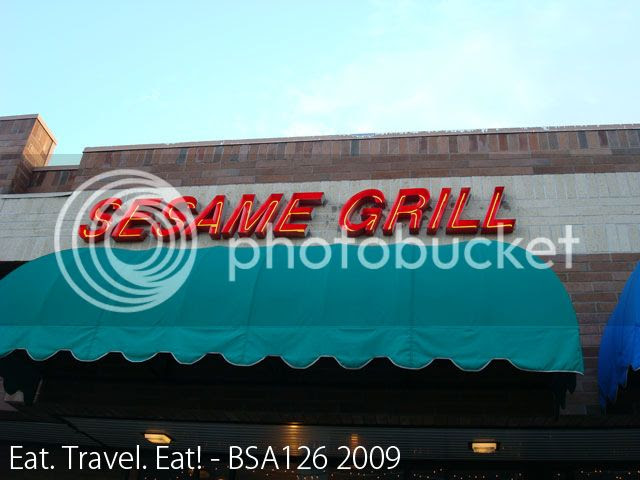 Special deals are always a good reason to revisit a restaurant. And so, during a weekend which we got hungry earlier in the afternoon, we decided to visit Sesame Grill again for their Early Bird Specials, which they have been promoting for a while now. Want to see the menu again? Well, here it is: 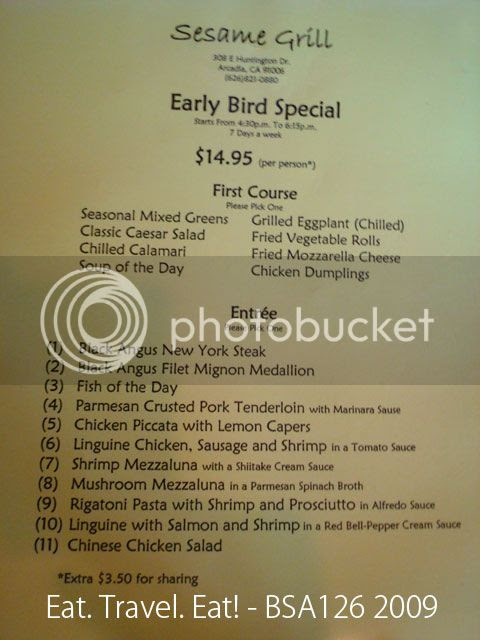 This time, the manager was also around and was very happy to see us as we constantly visit her place. She was exceedingly busy on that day, taking orders, offering suggestions, and more, and she still even managed to talk to us.

The dining room was also pretty filled up, but still not as much as before. At least it wasn't empty; that would be pretty unfortunate! It was also fairly bright with the good sunshine. They didn't even need to light up the candles this time! 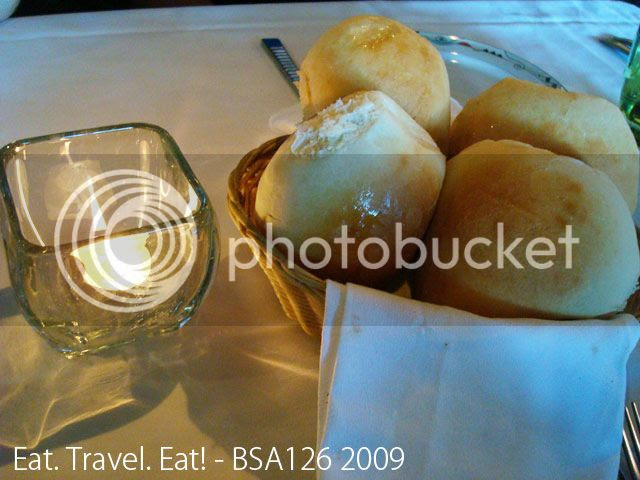 Like usual, the meal started off with some of their freshly baked bread, which was warm, crispy on the bottom, and soft on the inside. Butter was served alongside. We dipped some of the bread in this: 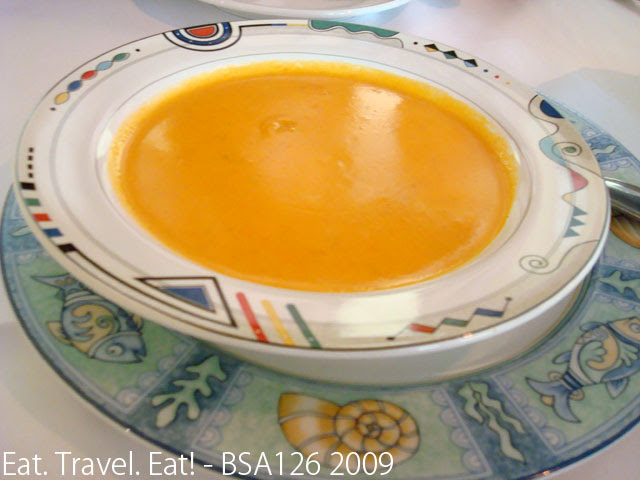 This was the "French Vegetable Soup", which was one of the two choices we had for soup. Two of us picked this, and it was a lightly creamy puree of different vegetables. The flavors were similar to minestrone, but more muted and more creamy tasting. As you can expect, the bread was scrumptious paired with the soup. 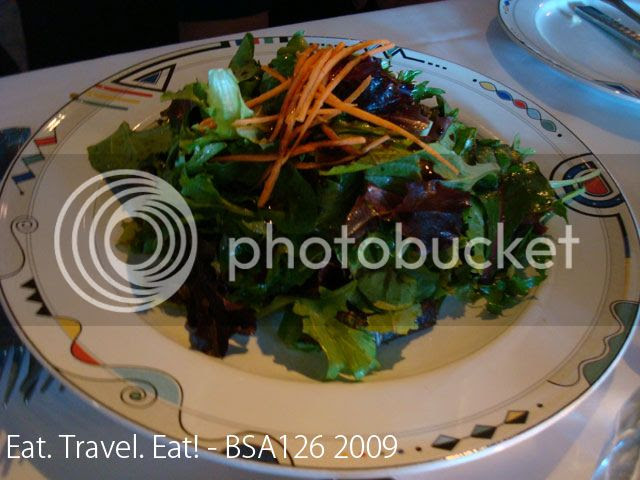 I decided to go healthy and order the fresh seasonal greens which were pretty much the same as the last visit (the photo is also from last visit). As usual, a big blend of greens which are then tossed in some oil and balsamic vinegar.

For the main courses, the manager made suggestions, and we followed along- after all she is the manager! There were 2 of them which were her suggestions. The first one was: 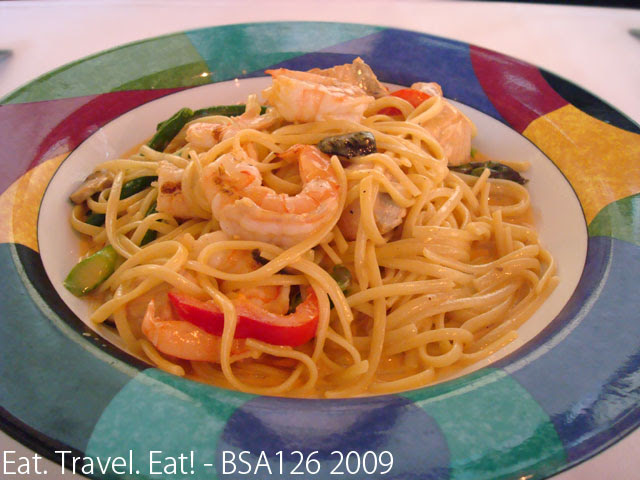 ...Linguine with Salmon and Shrimp in a Red Bell Pepper Cream Sauce. According to the manager, lots of Asian people liked to order this dish. We personally liked it too! There were plenty of salmon "nuggets" all over the dish, and there were many pieces of big, flavorful, and properly cooked shrimp distributed in the linguine. In addition, a variety of vegetables were put in to the dish- you can see some red bell pepper, asparagus, and mushroom. The cream sauce was very light but also flavorful, which we liked. We usually do not like ultra thick and rich cream sauces (like Alfredo), but this was excellent as it was flavorful but not thick and rich. 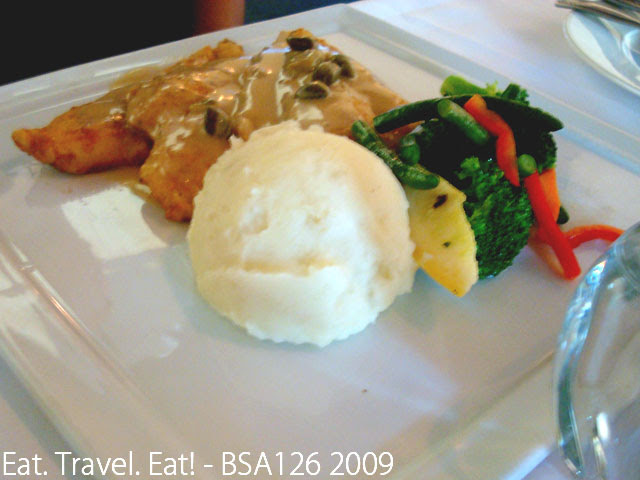 And this dish was the Sandabs with Lemon Caper Sauce. This was okay, but you definitely had to eat it while it was there! If you took it home, the dish would taste bad. The fish was definitely not a mild flavored fish like tilapia- it was more heavily flavored like salmon or seabass. Unexpectedly, the lemon caper sauce was actually pretty thick, as well as flavorful. Usually lemon caper sauces at seafood restaurants are all thin and made out of butter, but their version was very different. 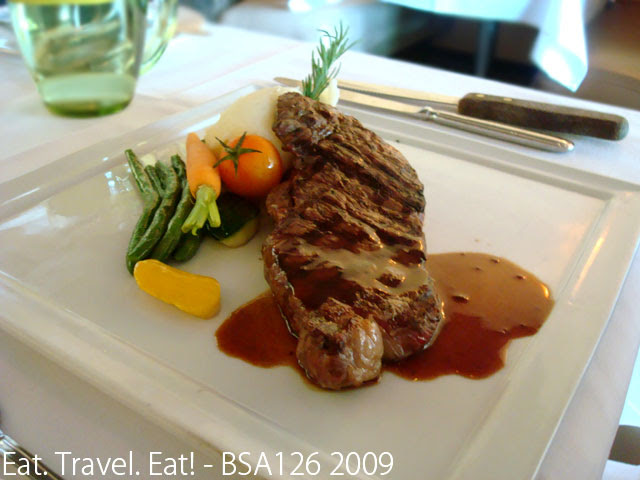 We also ordered a New York Steak which was cooked perfectly to what we had wanted. There was a bit less sauce this time than normal, but this allowed the meat's own flavor to shine even more. This time, the steak was much larger than last time (you can compare the 2 photos).

I am especially happy on how this photo turned out this time around! Do you like it? 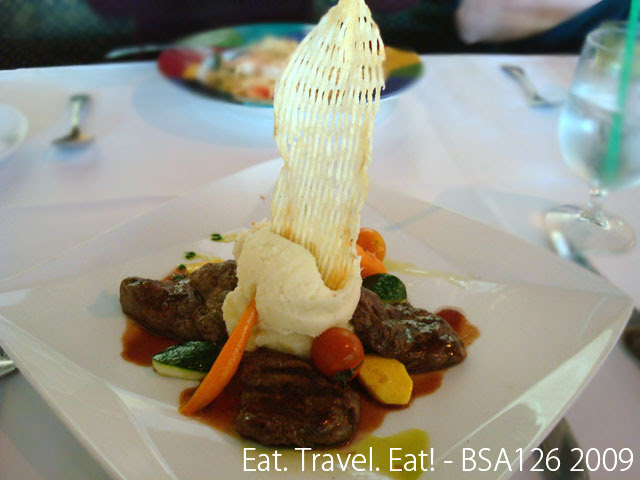 And lastly, I ordered the Filet Mingon Medallions which were cooked to a nice medium and melted into your mouth. Again, there was less sauce, but it allowed the meat's own flavors to be highlighted even more so.

Overall? Another great experience at Sesame Grill. We'll definitely be back.

Yep, a thin waffle cut chip. They premake it and leave it in a box until they need it.

Yep, still alive and running. Lots of regulars go to this place still; sometimes we hear things like "see you next week" which is pretty unusual for us to hear at a restaurant!