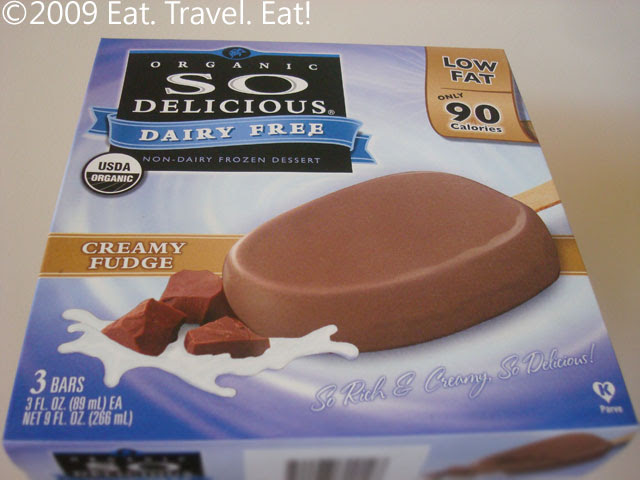 Since it seems like everyone likes frozen treats these days (e.g. Costco, Trader Joe's, and Yogurtland) according to my statistics, I'd thought it would be nice to start off this product review section with a frozen treat. Kind of fitting too as it is quite chilly, and for some, having a cold treat on a cold day is well, the perfect experience!

Shopping at Fresh and Easy can be quite an adventure, especially after our local Fresh and Easy in Arcadia expanded their ice cream section, bringing new brands to the scene. So Delicious was actually there beforehand, in the top shelf. So, during one visit, we noticed it while wanting to buy some ice cream bars, and decided to go for the So Delicious Fudge Bars. After all, they were made out of soymilk. This would definitely be something interesting.

Other benefits included the fact that the bars were certified organic, and they were only 90 calories. That is equal to Quaker's Oatmeal Raisin granola bar...which is in my opinion, not a very tasty snack by itself (needs to be eaten with something else instead). 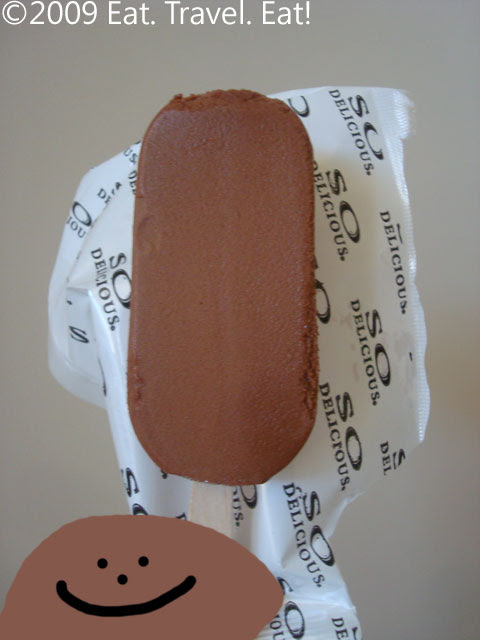 The smiley face appears...again.
Opening the box, it was evident this box should have been in Consumer Report's Selling It (goofs, glitches, gotchas) Section, as there were only three bars in the box, which probably could have fitted at least three more additional bars! Extra space wasted. But moving on...

I opened the package and the first impression was the the fudge bar was quite small. If I cut it in half and put one half on top of the other the size would be like the mini cakes you would get at places like J.J. Bakery.

Wait. That is plenty right? No...not really. That is what you find out when you bite into it, as it is...fluffy, airy, and light! Meaning that there was plenty of air mixed into the soymilk mixture as it was churning in the machines. As for the taste, it was like having a frozen fluffed up soymilk if you get what I mean. There was a good bit of chocolate flavor but it was definitely not comparable to Fresh and Easy's chocolate ice cream which seems like eating chocolate. Think the amount of chocolate flavor in store bought chocolate milk with just a bit more chocolate flavor. In addition, the fudge bar had plenty of soybean flavor in it, which stood out quite easily among the other flavors in the fudge bar. I think they could have formulated their recipe to not have that soybean flavor stand out so much, but it is pleasant if you enjoy that type of flavor that is. I am fine with it, but am not a fan of it.

So overall, an intriguing product. A fluffy frozen delight is quite delightful after all, whether it be a chilly day or a hot day.

EatTravelEat said…
Mochachocolata Rita,
Sadly it is only available in the US according to their website. It would be a smart business decision to expand internationally though...but they are a smaller business.
November 18, 2009

Anonymous said…
This comment has been removed by a blog administrator.
November 19, 2009

EatTravelEat said…
noobcook,
Haha...so I was right! People do like cold stuff in cold winter and hot stuff in hot weather.

123 123,
Appreciate your first part of your comment. As for your second part of your comment, thanks for trying to hurt other people's innocent minds with above suggestive images! People like you will most definitely hurt the young men and women of our society especially since you are putting that link on a site such as this one. Your comment is removed and please do not link any such website(s) to this blog again if you wish to comment again.
November 19, 2009

EatTravelEat said…
Tigerfish,
Yes, definitely weird! Usually it is like 6 or 8 for a small box.
November 22, 2009