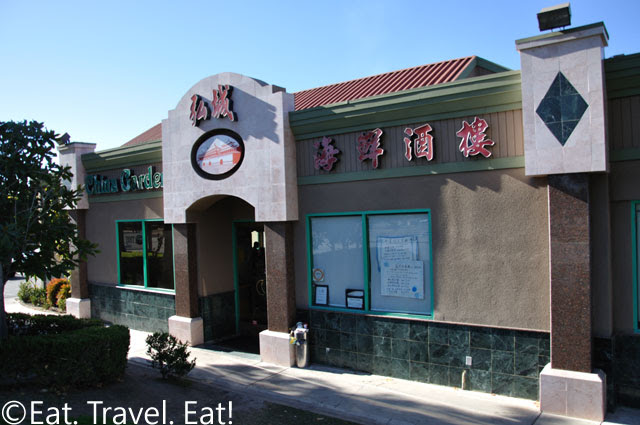 Like I said in my post on A&J Restaurant-Irvine, we wanted to visit China Garden as we have been there before with good impressions. And so, we did visit China Garden on our last trip for Thanksgiving. Why even bother so? Well, we did want to eat at Newport Beach or Charlie Palmer. Charlie Palmer was closed for lunch due to Thanksgiving, and in Newport Beach almost every restaurant was CLOSED. So we turned back around (wasting lots of gas) to Irvine, as we could assume that all the Chinese restaurants would be open, like what happens in the SGV.

Shockingly, what was even more horrifying was that we got a table immediately! I went up to the employee and asked how long we would have to wait and she just said, "You don't". Haha. So unlike Arcadia's Full House or Hop Li. They would have been filled with customers already due to the holiday! 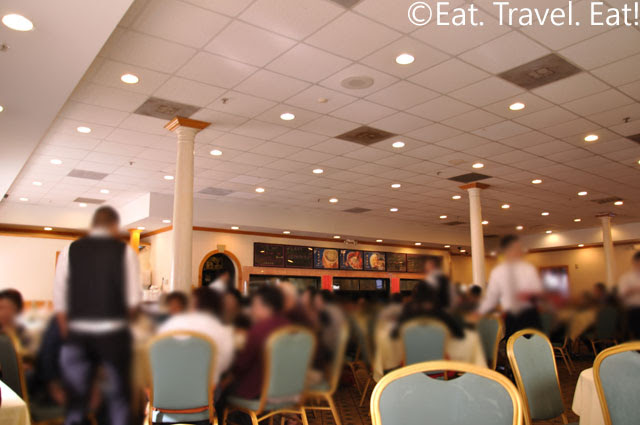 The interior was quite simple with a bland color scheme. The chairs pretty much added the pop of color needed. 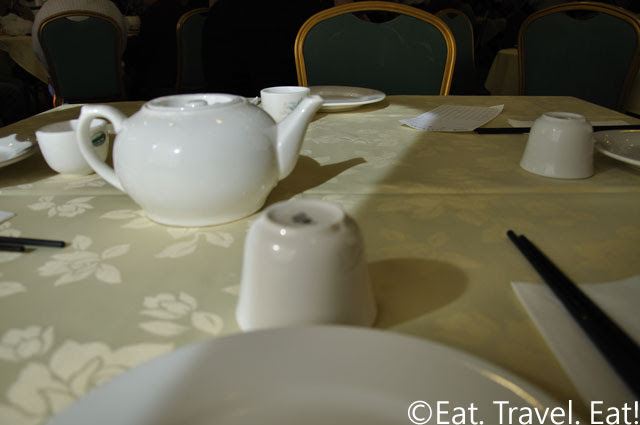 So, time to order some food! But before we do, let's talk employees. What we found interesting:

1. There were two young girls who were serving food who did not even speak any Mandarin/Cantonese. This was quite a surprise to some of my dining companions as if you guessed it, all of the Chinese restaurants we have been to (even in Boston, London, et cetera) had all employees speaking at least a few words of Chinese. You see, even at Full House, the Mexican employees who help fill your teapot with hot water can even speak the names of different Chinese teas. I guess we should not have been surprised at all though as plenty of people were conversing in English. This is after all not the SGV.

2. We constantly were asking how much the prices were for each plate of food and what was our answer? Nothing. As a employee said, "They are just like the way they are." Confusing! Not helpful to any newcomer at this place (we have only eaten here for dinner in the past, and that was about four years ago). 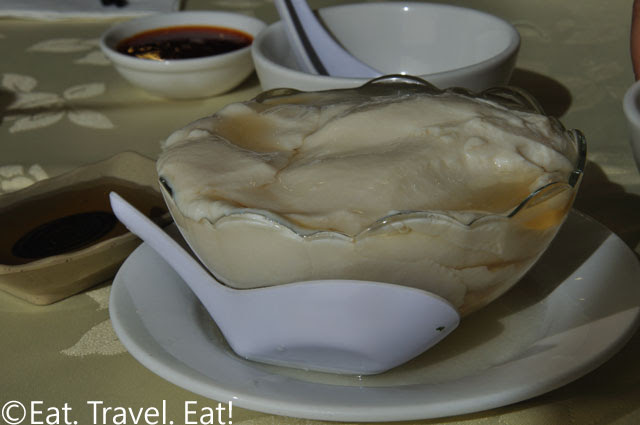 (Thank goodness RAW editing as this photo would have been bluish due to incorrect White Balance setting.)

First item we had was Silken Tofu ("Dou Fu Hua") which also came with a side of ginger syrup so that we ourselves could control how sweet the dessert would be. The employee who served us this dessert was very friendly and careful, using slow actions to scoop up the tofu dessert from the large pot. And in return, it was pretty good. It melted in our mouths and was slightly gritty. It seems like these days restaurants do not make their tofu hua so silky smooth so this was on the smooth side in comparison to other places. 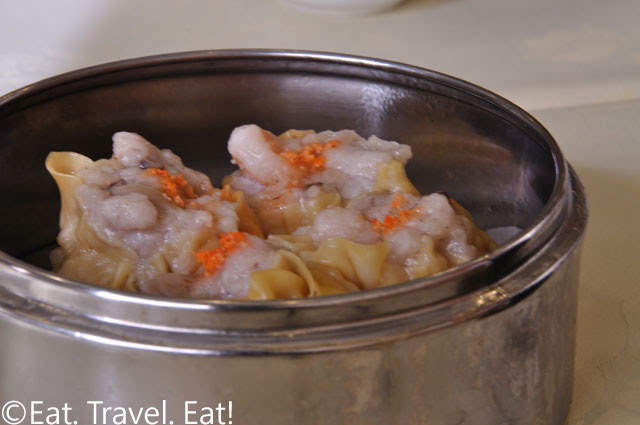 We also ordered a steamer of Shu Mai which was just like any other good Shu Mai- large, meaty pieces of pork and shrimp. 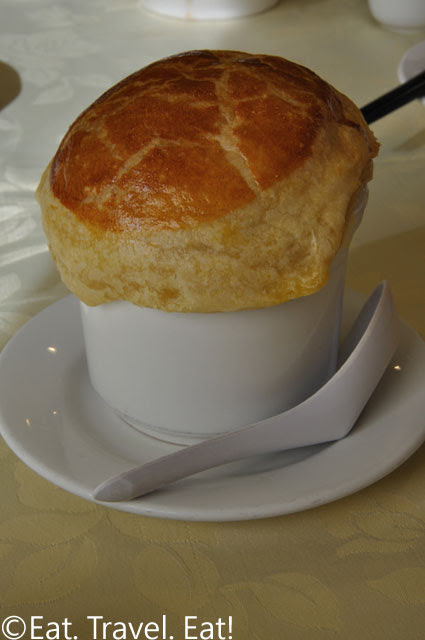 One employee had a large platter of Puff Pastry Almond Milk and so we got two of them. After all, this item is not frequently seen at every dim sum restaurant. 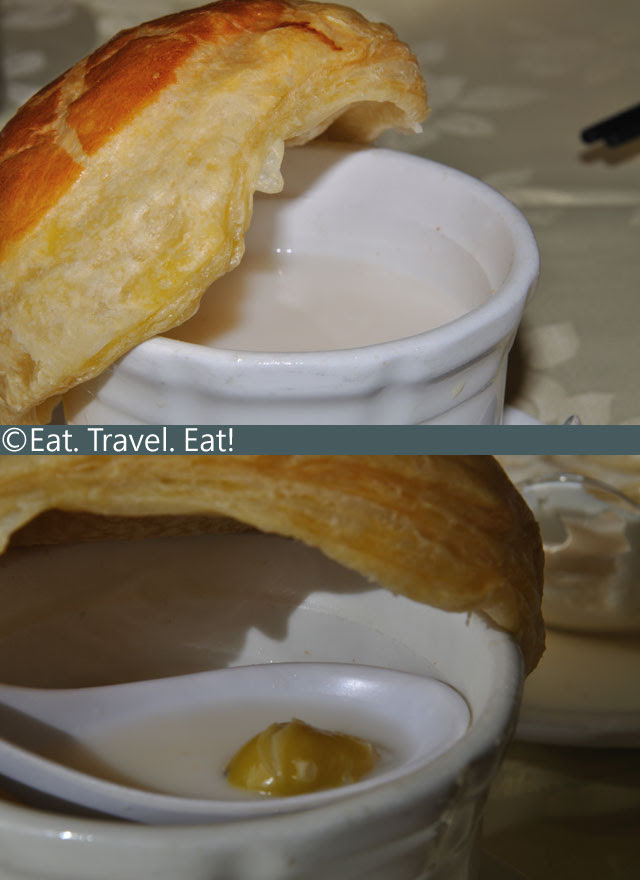 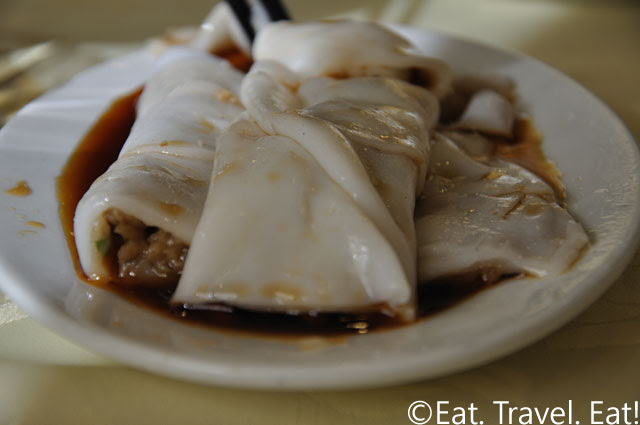 Unfortunately, the beef rice noodle rolls were not as great compared to the other items. The beef was okay and was similar to other dim sum places, but the rice noodle batter was very thick, as you see in the photo. Too thick for me! But it filled us up. This was important as China Garden did not have too much dim sum available. 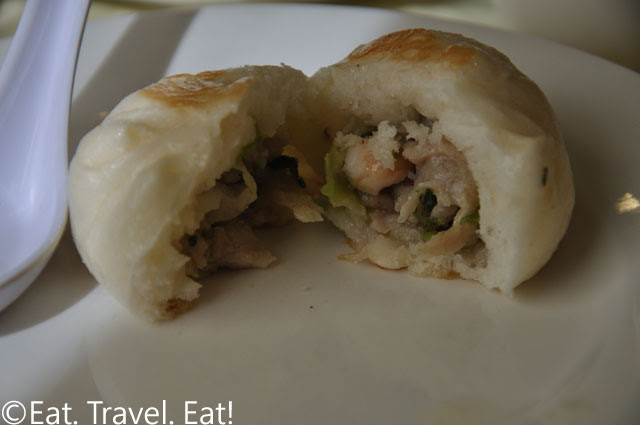 The Shen Jian Bao was better, but still not as good as Full House or Hop Li's versions. The outer pan fried area was not very crisp anymore, but the inside filling was delightful with cabbage, pork, and shrimp. 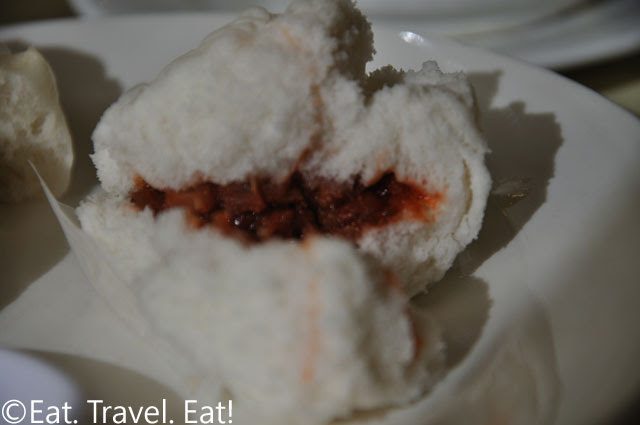 We were going to order baked Charsiu Bao but when the employee who spoke only English said that they were made about 3 hours ago, we declined the offer and instead chose a steamer of Charsiu Bao instead. These were quite sweet, but look at the color of the char siu mixture. Way red. Why is food coloring needed? Bah. 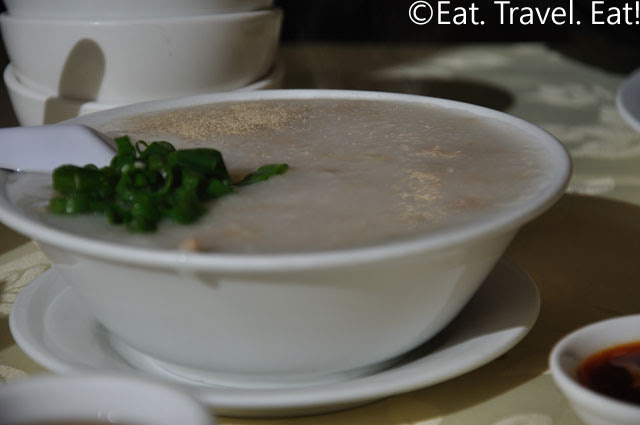 The preserved duck egg and pork porridge was a more reliable choice and was just as good as any good dim sum restaurant's porridge. But, China Garden's version came with a sprinkle of pepper instead of "Boh Chun" or fried wonton pieces. Still good anyway. 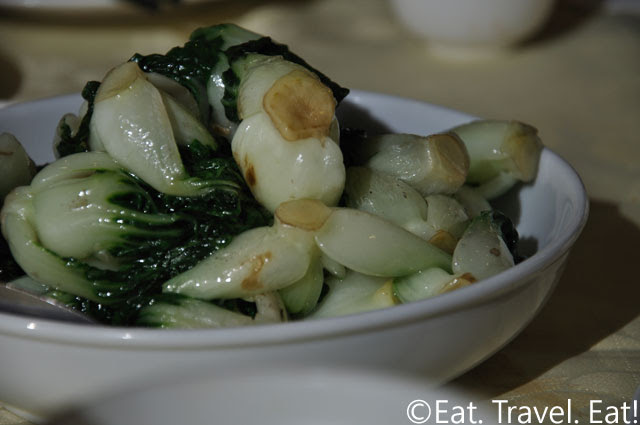 Since China Garden did not have much Dim Sum on hand in the first place, we ordered some items from a menu just like what other customers were doing. However, both items we ordered were not very good. Look at that plate of bok choy. What is wrong?

1. The bok choy stem area was not cut off, but hey, most restaurants do not cut the yellowed portion either. We do at home.
2. The boy choy is not fresh. Why are there brown spots?
3. Totally oily. Look at that shine!

Nevertheless, it was seasoned quite nicely, but the three complaints I just talked about made my dining companions totally unhappy. To fix this problem, we filled a bowl with tea and dipped the bok choy in the tea to remove some oil. As you would have guessed, the employee wanted to take away the bowl, but when we told him not to, he was shocked. 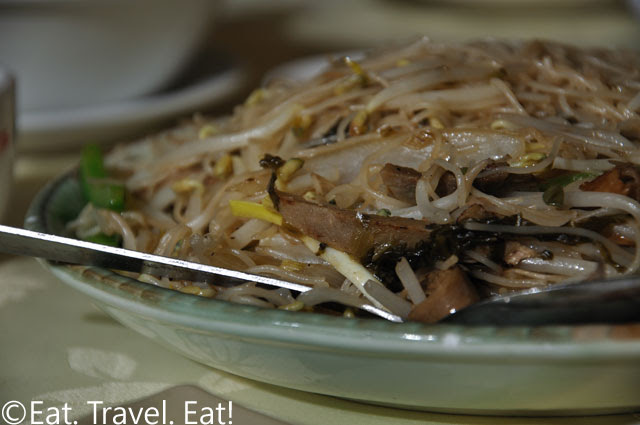 The Shredded Duck and Preserved Vegetable (Shuet Choi) Rice Noodles also had a problem with oil. There was just so much sauce/oil in the whole plate. However, it did taste quite nice with the different textures of yellow chive and bean sprouts! Bell peppers added pop to the rice noodles, which were cooked just to the right point. 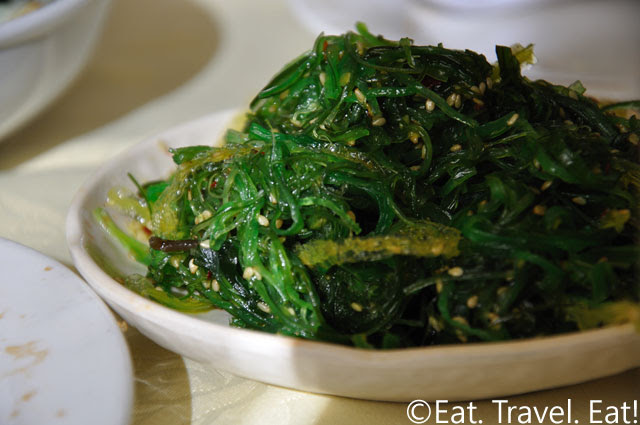 The last item of the day was a plate of Seaweed Salad, which only had seaweed salad. No filler of pickled veggies to be found! It was however quite cold and a bit sweet though, but otherwise a delicious seaweed salad. A bit of sesame oil and vinegar added a piquant punch to this crunchy seaweed.

How much was the total? About 50 bucks. CRAZY for dim sum. Some of the dim sum items were 5+ dollars. Bwawawa...Arcadians are too spoiled with their 2.20 or less rate per plate of dim sum. Kind of tells you why we just usually eat dim sum in Arcadia only, but we have eaten at other places too which are in the queue right now. :) The food was okay, but we've seen better. Items like the bok choy freaked us out a bit, which may also explain we do not plan on returning soon. After all, China Garden is too far from our main destination point, UCI.
China Garden
14825 Jeffrey Rd.
Irvine, CA 92618
Tel:(949) 653-9988

Unknown said…
oh WOW! Puff Pastry Almond Milk! how come no one in hk is doing that? grrrrr
December 21, 2009

Velva said…
This was a very good restaurant review. I really enjoyed reading it and reading your thoughts. Thanks for sharing.
December 22, 2009