December 19, 2009
Since the most read blog post on Eat. Travel. Eat! is a Trader Joe's product, I thought that it would be nice to show you a box of gifts that our friends gave us which were from Trader Joe's. Fits the season of giving too, and all of these products are great for an afternoon tea or party- all things that are perfect to do during the holiday season(no, Trader Joe's has never paid my friend or I to write a review :). They should after getting 1600 pageviews just on one single product and being able to get their product ranked up high in the Google Search Engine thanks to me! ).

Our friends gave us a package of produce including exceedingly diminutive but extremely flavorful organic tomatoes, berries, pomegranate green tea, and then these desserts that I will be talking about today. So, how about we start off with something made in Belgium? 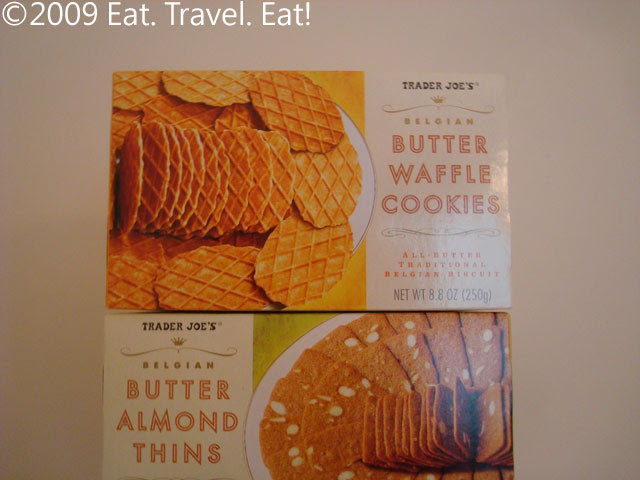 Both Belgian Butter Waffle Cookies and the Belgian Butter Almond Thins are actually made in Belgium, and each of cookies are quite simple with a small ingredient list in comparison to other cookies. Each of their packaging is similar with a font similar to what Oishii Eats was using. Inside is a plastic tray with two rows of cookies. 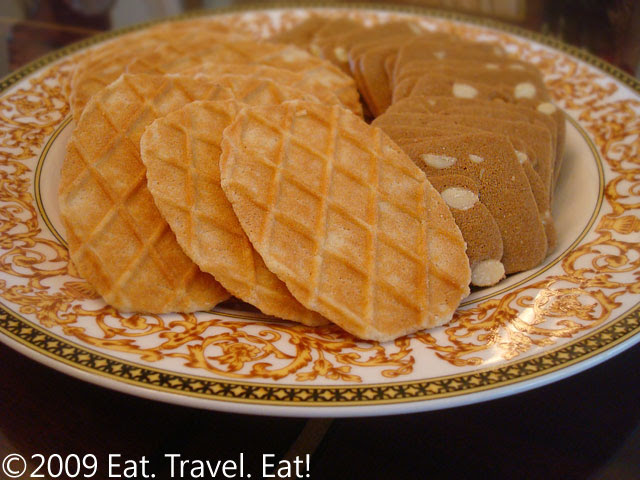 Above you see half of a box of each cookie. My favorite of the two was the butter almond thins. Crunching crisply, these almond thins were lightly sweet, fragrant from the baking process, and delicious with tea :). The butter waffle cookies on the other hand were thicker and were like a thick waffle cone which was not too sweet, but buttery. Both are great afternoon tea items. 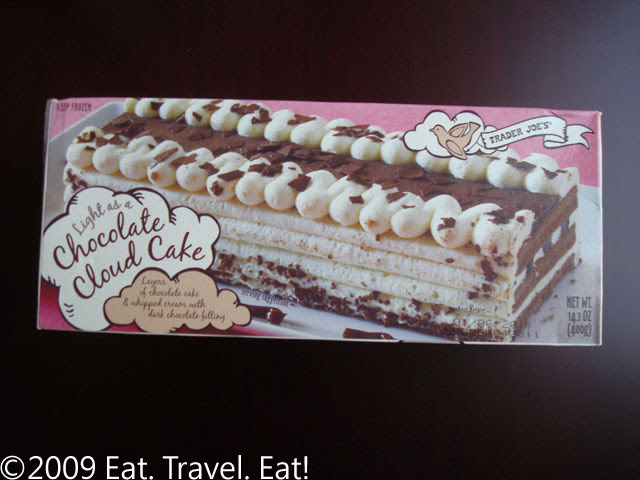 Another item our friends bought was the Light as a Chocolate Cloud Cake which retails for about 6 dollars. So, about the same as Taipan's Chocolate Roll in Arcadia, which is also previously frozen. But inside my head, I was thinking, how could such frozen product still look like how it did in the box? No way! 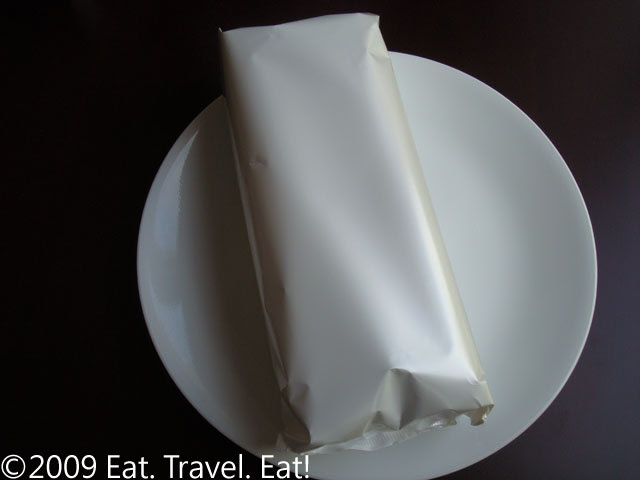 The inside packaging reinforced my thoughts even more. Soft container means an easy chance to make all the decorative whipped cream go mushy! 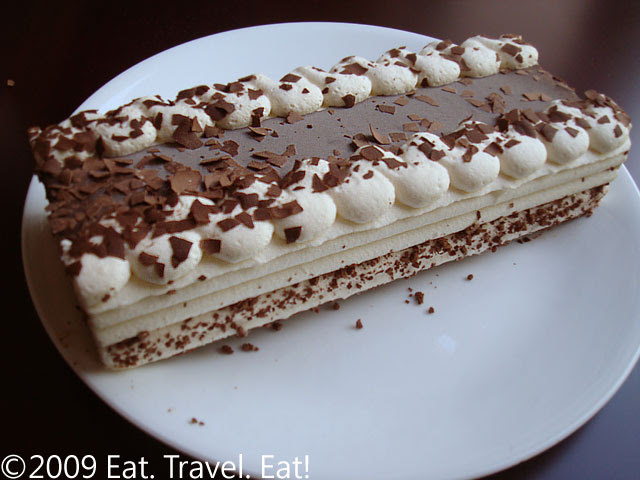 But, you see, I was proven wrong. All the frosting was just as pretty it was on the box. The looks of the product was quite exact to the box too other than the chocolate shavings not being as evenly spread out. AMAZING! 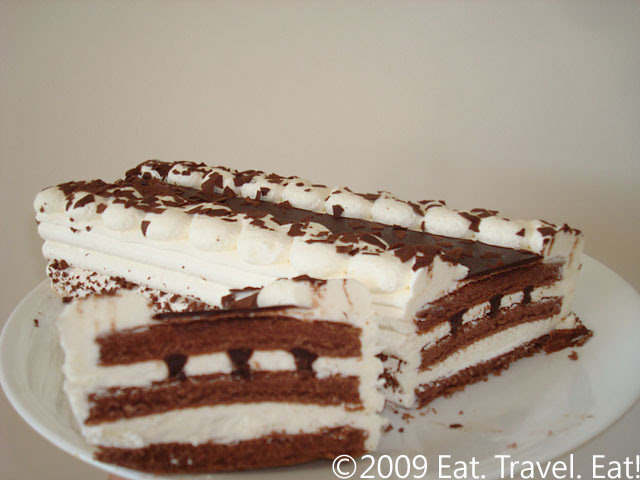 So how was this chocolate cake? Quite scrumptious, even after two days after defrosting (actually it got better!). The whipped cream was very light and only slightly sweet, but the chocolate cake was not too chocolate-y (I like a deep flavored chocolate cake which is not too sweet). Chocolate ganache helped resolve this problem slightly though, and it was very sweet and chocolate-y. Nice and simple light cake which was quite similar to an Asian style cake- not too sweet with a fluffy cake texture. Like the box says, perfect for a casual or a formal party. 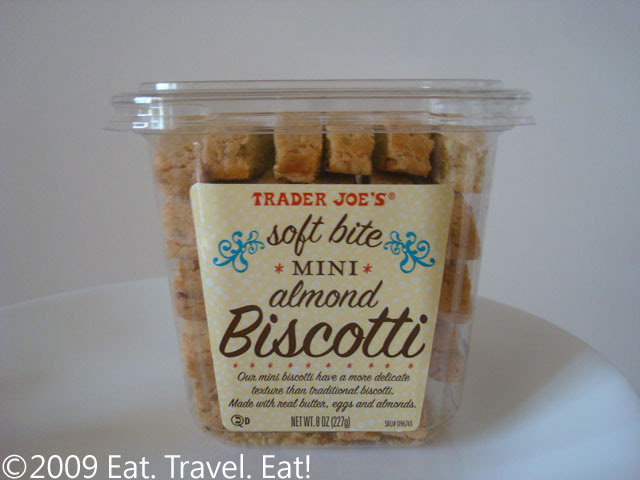 Last product I am going to write about is the Soft Bite Mini Almond Biscotti which was packaged in a compact plastic container. I have not had much biscotti before, nor that I have ever dipped them in coffee (as what people say to do?), so not much great knowledge on biscotti. The box reads that this biscotti has a more delicate texture compared to regular biscotti. 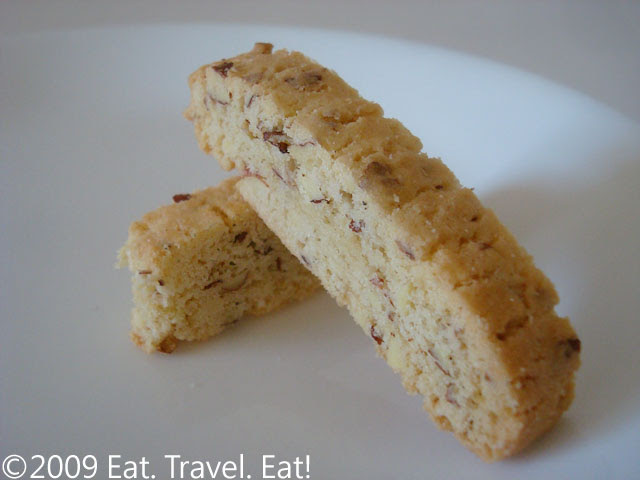 (A pretty close-up shot taken with the W90. Now what would happen with the macro lens?)

Concerning the "soft bite", it was not really "soft" by itself but had a dense crunch feeling when bitten in the mouth. The flavors however was just like the name of the box- a fragrant almond extract flavor throughout the biscotti. There were also minuscule pieces of almonds in the biscotti which was nice! Not too big, but not small for the small size of cookie.

Overall? All were great products to eat. I would buy them again, but if I did frequently I would get EXTRA FAT (not that I already am). My time running the mile would drop. So, if you plan on trying out these products, eat them in moderation please! Especially the butter cookies :).

*P.S. Check back these two weeks for new posts! It is winter break and so thus I have more to write about. Plus the 1st anniversary is coming up in 8 days (what?!).*

Dave -nibbleanibble said…
You're right about the biscotti not being soft. The first time I had it, I had the impression of it being soft and chewy like bread. The texture even looks like bread. However, after taking a bite I'd classify it as more of a cookie than a bread.
December 20, 2009

EatTravelEat said…
Dave,
Totally agree with your opinion! I would have not called it soft bite. Bad marketing :(.

By the way, how can I leave a comment on your site? Do I need to sign up with the commenting people or have I just not looked careful enough yet? Great site- love the pictures especially!
December 21, 2009