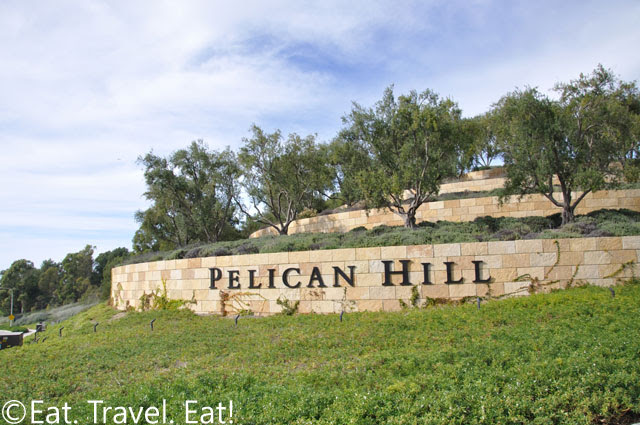 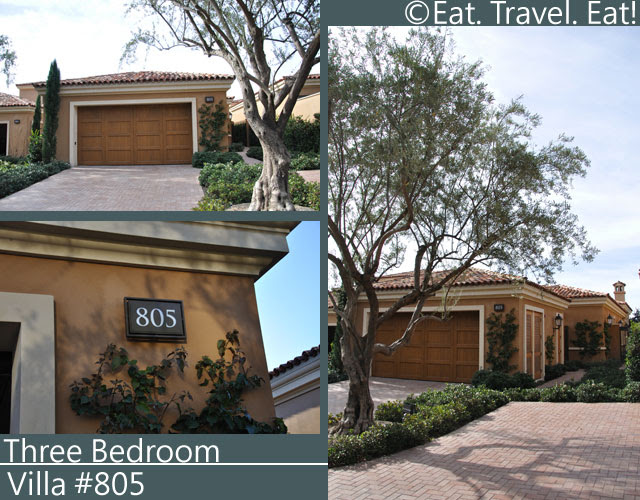 If you did not read my Three Bedroom Villa #805 post yet, you probably do not know that I left out the kitchen in that part of the review. It now has a separate post: this post! I thought it would be a good way to start out the year with a beautiful but functional kitchen. So, here you go. 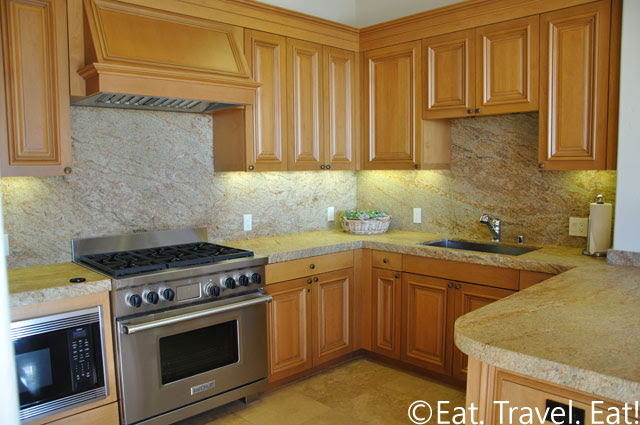 Behind the dining table is the kitchen, which is quite well equipped. Not only are there high quality and expensive appliances from brands like Miele, Sub-Zero, and Wolf, there are also plenty of goodies hidden in the cabinets, like All Clad pots and pans, a number of Cuisinart, Hamilton Beach, and other electronic appliances, and plates. Most hotel kitchens are for show. Nothing is really placed into the cabinets or outside. You just have coffee, ice, and tea, as well as cups, plates, and silverware. At Pelican Hill, you will find more. Come take a look! 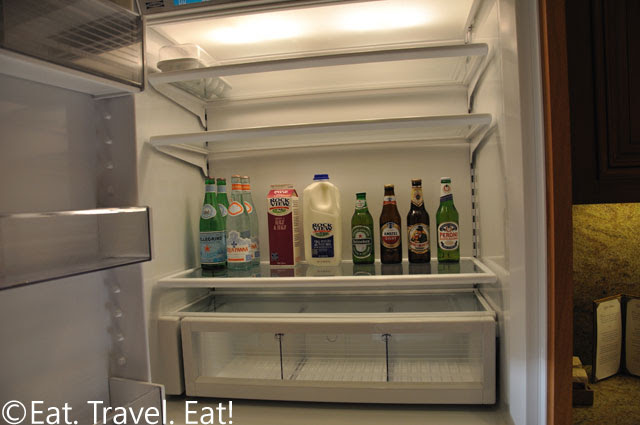 The Sub Zero Fridge, which although isn't the largest model (who cares anyway), is still quite new. It had the same smell as our fridge did when it was new. Inside are a nice assortment of FREE items. Yes, I said it. FREE! 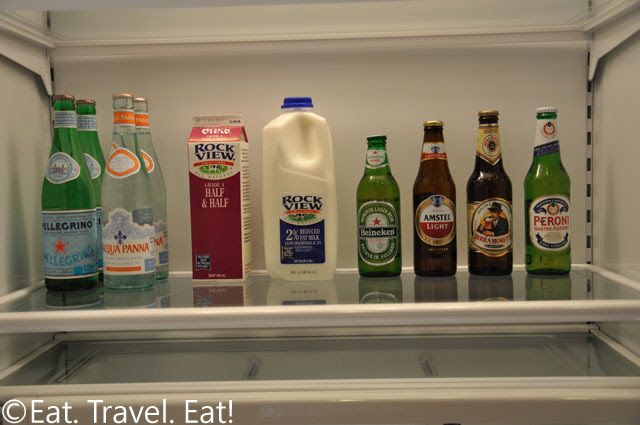 4 bottles of water (2 Aqua Panna, 2 Pellegrino), a quart of half and half for coffee, a half gallon of milk, and an assortment of international beers. Looking at this photo is particularly saddening. Why? We only touched the milk but enjoyed it. We forgot to enjoy the bottles of water and then take away the glass bottles home for display and re-use. 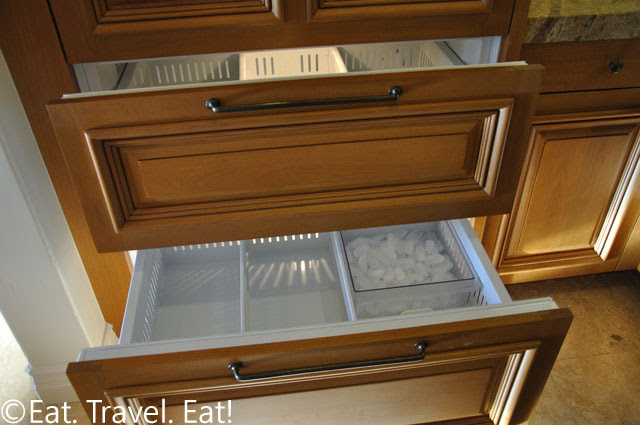 Below the fridge door is a slide out freezer with two drawers, with one containing ice. And plenty of it! The good thing is, it will not melt, unlike a typical ice bucket. 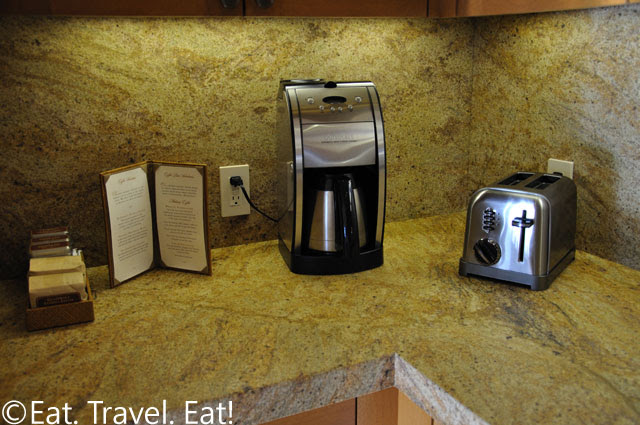 Moving around to the corner is a Cuisinart Grind and Brew Thermal Coffeemaker and a Cuisinart Toaster. We did not use either. I did however try to use the coffeemaker to just boil water (and not have coffee), and that experiment failed. The scents of previously brewed coffee went into the boiled water. Well, what do you expect? It happens at California Pizza Kitchen and other restaurants too with their coffee machines... 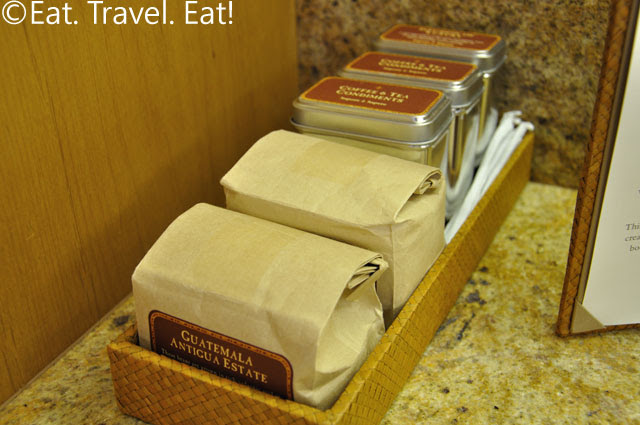 In the basket, there are two bags of coffee made by Sapore e Sapore (Pelican Hill's own, I guess?) as well as teabags. In addition, condiments like creamer (in liquid form), sugar, artificial sweeteners, and the like were in the metal tins. 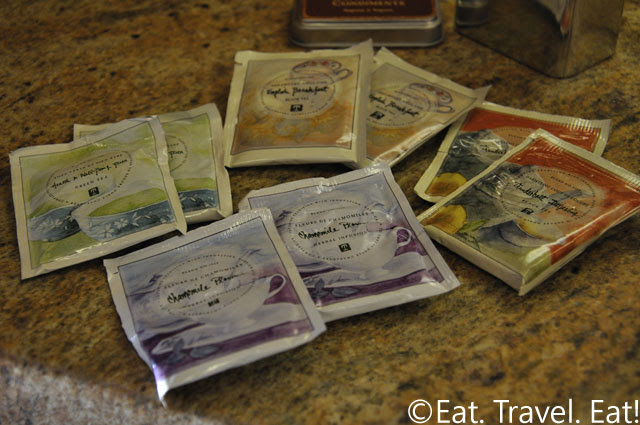 As for the teas, there were eight teabags with two each of English Breakfast, Darjeeling, Green Tea, and Chamomile. Again, did not try any, but I would expect them to be quite fragrant and enjoyable to drink. 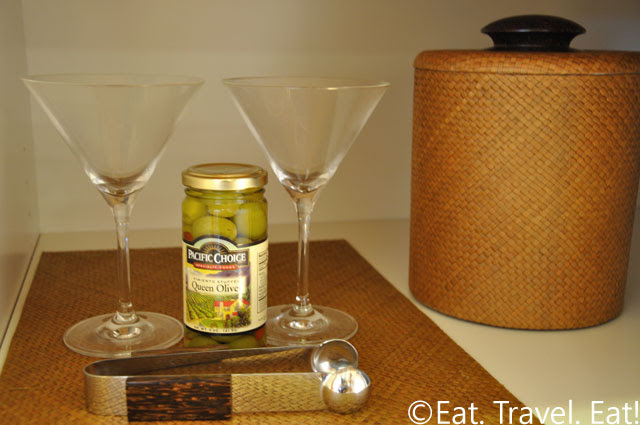 Below in the corner are quite a number of things. The All Clad pots and pans are in one cabinet. In another cabinet, martini glasses and olives are stored. Now, these olives were NOT free. I was not going to open them anyway, so it did not matter. Olives are not my favorite, as you can see in my last year's postings. Virtually none had any mention of olive, with exception of olive oil :). Above in the same corner, in a cabinet, are plenty of Villeroy and Boch plates and bowls. They certainly made for good photo taking the second day! 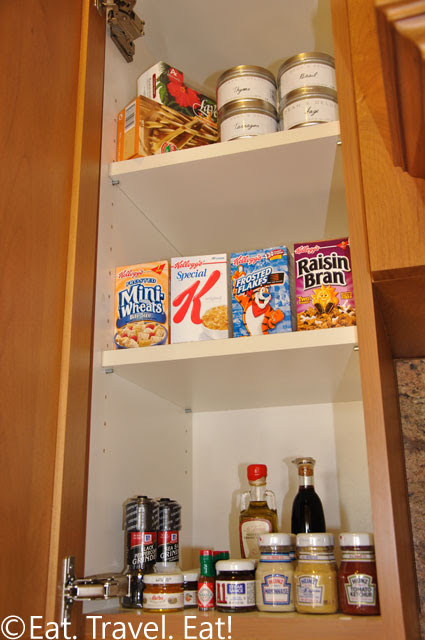 Moving a few cabinets to the right, is a cabinet full of complimentary items, ranging from hot sauce to crackers. Since complimentary items are always intriguing, our butler had the knowledge to show us this cabinet first before showing us anything else in the kitchen during our tour. I was certainly quite amazed when he opened the cabinet. Look at how much stuff there is!!! 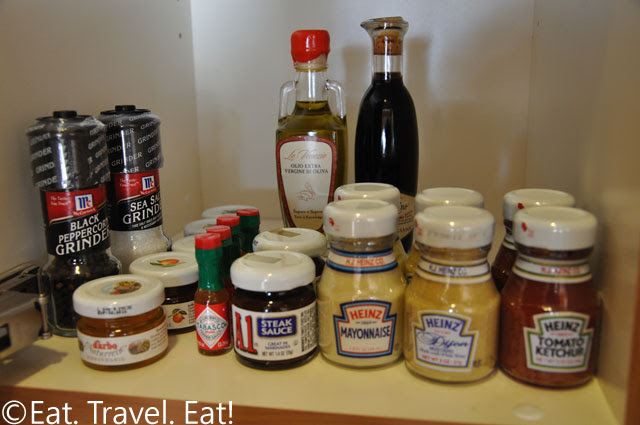 The first shelf had jams, A1 steak sauce, Heinz mayo, dijon mustard, and ketchup, Tabasco hot sauce, McCormick black pepper/sea salt grinders, Sapore e Sapore extra virgin olive oil, and Sparrow Lane Blackberry Balsamic Vinegar. What made it better? Everything was packaged in glass containers. You do not see Heinz products in glass containers that often now, with exception at fancy restaurants (Pelican Grill had them too...). 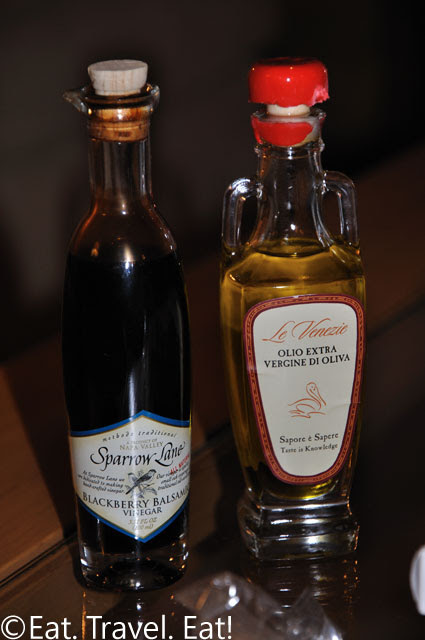 If it was not enough already, here are the glass containers of the olive oil and vinegar. I find their shape to be quite elegant. The olive oil looks like a mini trophy! :) 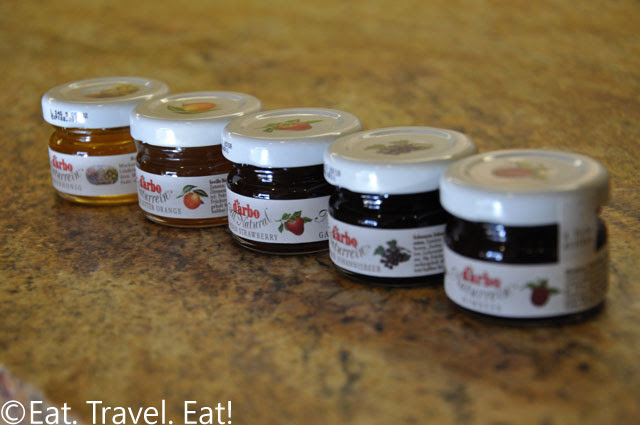 The jams were made by Darbo, with the usual flavors of strawberry, orange, and the like. There was also a container of honey. This made it all so convenient if you wanted a lemon honey drink or the like. 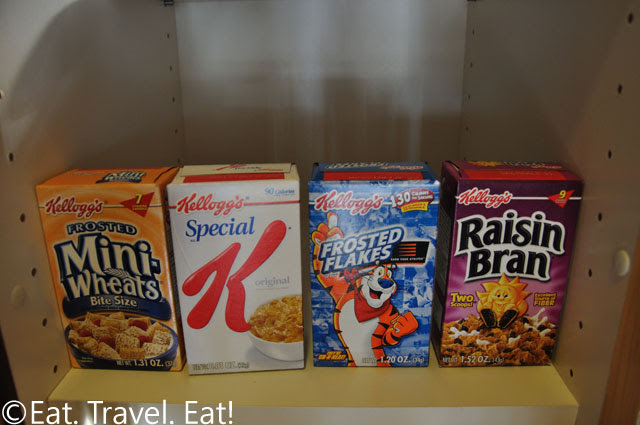 On the second shelf were the Kelloggs cereals, which were the perfect match with the container of milk you saw earlier in the fridge. We finished all four containers of these the next day for breakfast. Convenience at its best :). 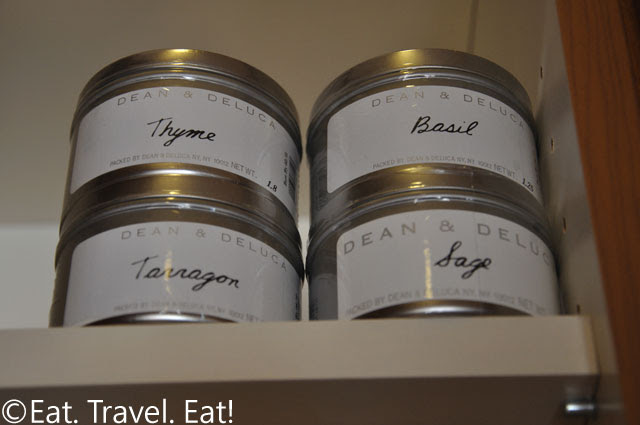 The third shelf housed metal tins filled with herbs, as well as... 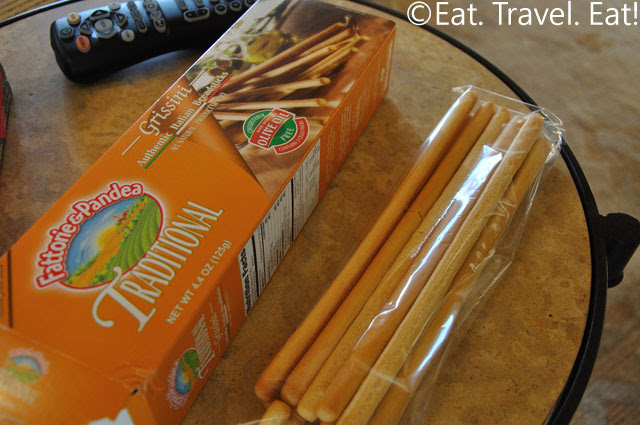 Fattorie and Pandea Grissini, which were light and crisp breadsticks. There were two of the packages you see to the right in the box. Quite enjoyable with a mix of the olive oil and vinegar :). 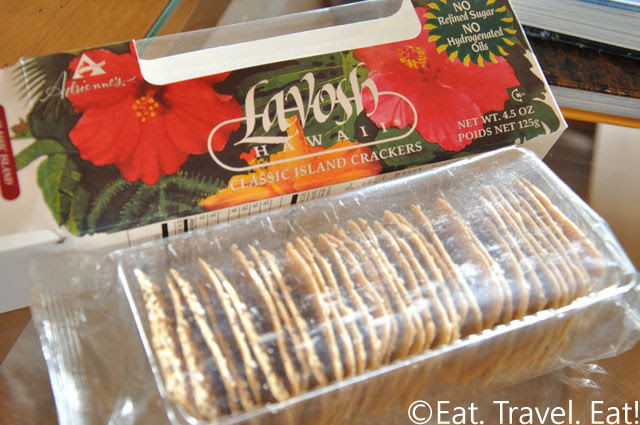 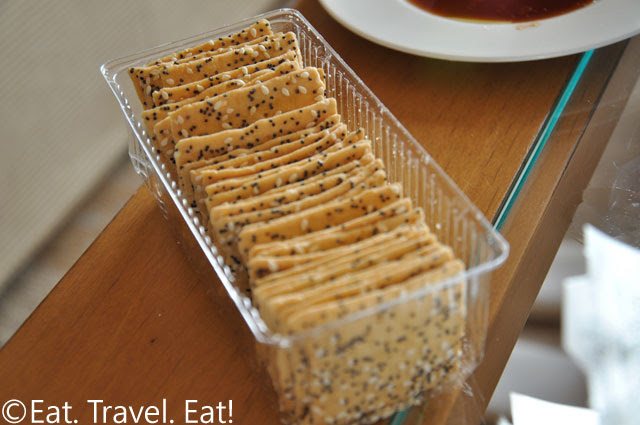 They were studded with plenty of black and white sesame seeds. These crackers, in comparison to the breadsticks, were thin, but dense, with a heavy sesame flavor. Again, another good cracker to dip with the olive oil and vinegar- it matched perfectly! 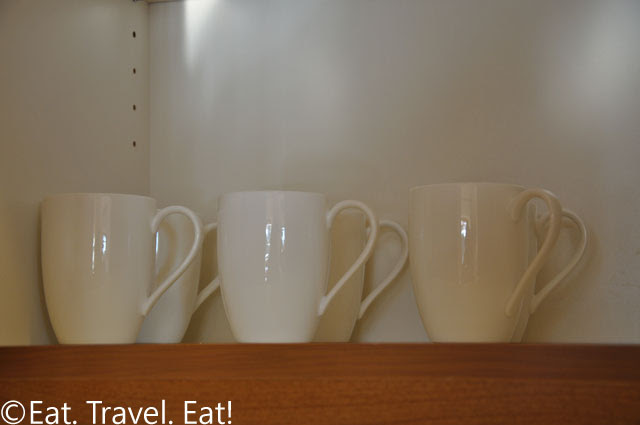 Another cabinet houses coffee mugs- 6 of them! There were also plenty of wine glasses, as well as water glasses, in another cabinet that I did not take pictures of. 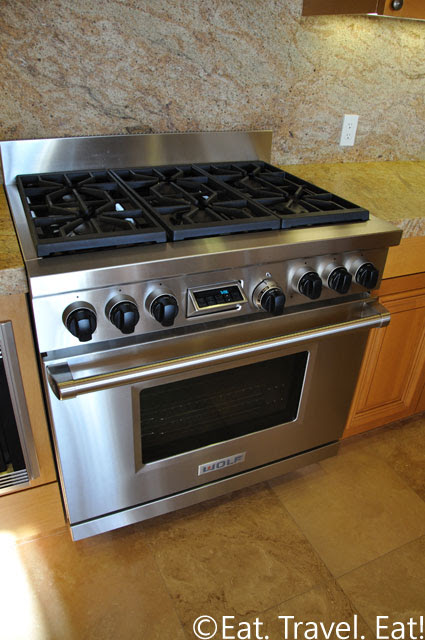 And lastly, here was the Wolf range. It's always nice to compare the old (ours) to the new, and this range was quite different. The build quality was better in the new model, and there was an touch panel to control functions in the range. Unlike our range, this one did not have pit-pat-pat sounds when one or more of the burners were on. Lastly, this range would be so much more easier to clean. Why? The bottom of the grates had less pieces to handle, meaning less gaps. So, if someone made a mess with liquids pooling over the pot, it would not be such of a big mess.

But, some things do not change, and the range hood was just as loud and noisy as ours still is today. 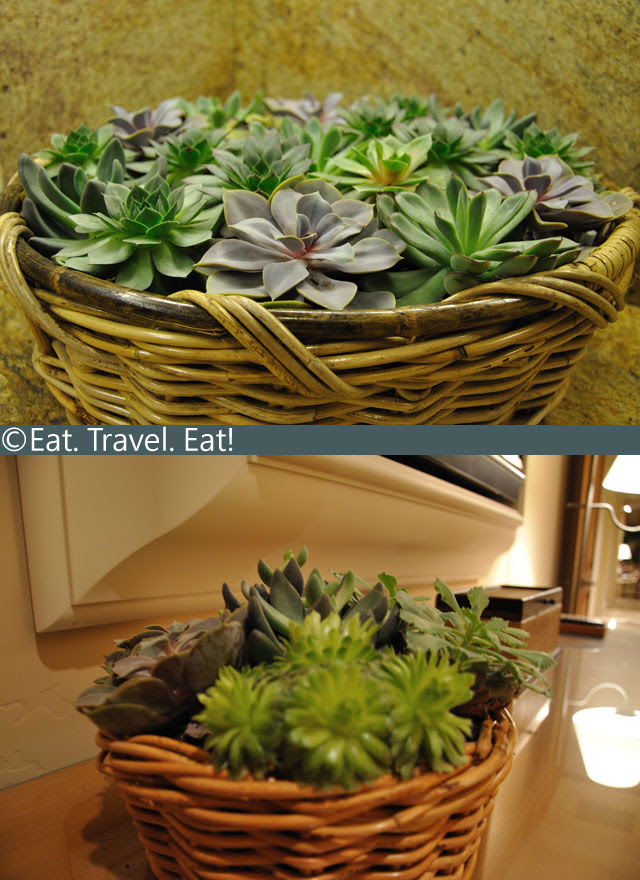 (top photo is basket in the kitchen, the bottom is in the Queen Bedroom)

In the other corner, there was a a basket filled with beautiful succulents. I want these! Pelican Hill does a wonderful job making these plants look the best they can be. I'd rather buy a basket of their succulents rather than going to Armstrong or some other garden center for these succulents- they just do not look as pretty. (exception to California Cactus Center)
And nearby the corner of the plant is a large stainless steel sink, which is quite nicely designed in fact. In the bottom of the sink is a metal rack so that dishes, silverware, et cetera are elevated from the base of the sink. A new sponge was also included in the sink.

Below the sink, the cabinet had a built in trash bin which opened up when you opened the cabinet door. In the cabinet, there was a glass jar with the two in one dish detergent packs. Dish washing done! After all, to the right was a Miele dishwasher. And further to the right was a wine fridge, already filled with bottles of wine for PURCHASE.

In the cabinets nearby were more appliances, like a Cuisinart SmartPower Duet Blender/Food Processor and a Hamilton Beach percolator which I was shocked to use as the bottom was a light green. It needed some serious cleaning! In addition, another cabinet housed a minibar with usual suspects like (large) bottles of liquor, chocolate, a one time use camera, Pelican Hill playing cards, et cetera.

At 2,573 sq. ft., and with a private 2-car garage, Pelican Hill's Three Bedroom Villa is basically and effectively a large home that is just missing its own private backyard and pool. There are plenty of hotels that have penthouse suites and the like, but they are not as well equipped or as high quality as Pelican Hill. Pelican Hill has thought out what customers would want or forget in their villas, giving them complimentary items like detergent and toothbrushes, which can prove to be useful especially since there is no store nearby Pelican Hill. The design of the villas are upscale, but feel like a home, and not a typical hotel room. A successful hotel makes a person feel that the hotel is their second home, and Pelican Hill, in my opinion, has certainly done that. Going into the villa, one can only think of relaxing with the comfortable seating, light brown/cream color scheme, and natural woods throughout the villa. Hints of greenery inside and outside are another nice touch.

What makes the villas worth paying for, other than for its size and features, is obviously the view- something great to watch during the day and something great to wake up to. Watching people play golf, zoom around in the ocean, and seeing the water ripple around in the ocean is quite relaxing and fun to watch. Plus, with the hill sloping downward to the ocean, it gives the view a sense of depth not found in other coastal California hotels.

Even better was that the villa was very clean and well kept for. Other than the Hamilton Beach Percolator, and that the blanket was too warm, everything else was basically working great. The villa felt new, not old, and a villa that could be lived in easily. So clean, in fact, that I would probably say it was the cleanest hotel I have been to. The many Shangri-La's, especially in Hong Kong, are dirtier and not as well functioning compared to Pelican Hill.

Overall, a wonderful room. High quality items, great location, great features, well kept for and painstakingly clean. What more could you want? For 1450, a great deal for the luxury seeker with a family.

foodbin said…
all the things are there for you to pamper-luxurious!
January 11, 2010

EatTravelEat said…
Amanda,
Most definitely! I think the four bedroom's kitchen would be even more spectacular. Not that this one wasn't nice enough!

Mochachocolata Rita,
Haha, it is so large already compared to other fridges! Sub Zero makes even larger ones too :).

EatTravelEat said…
Alice,
Yes, I was quite amazed too! Pelican Hill now makes me look for succulents all the time. Have planted a few and they are so far okay :).
January 16, 2010

SinoSoul said…
I thought our La Quinta Resort room was nice, but that Wolf 6 burger is FARKIN' RIDICULOUS.

Almost picked up an American Range restaurant 6 burner stove this weekend, but decided to hold out for the Jade.

EatTravelEat said…
SinoSoul,
For a 36 inch range, yes! How could you use all six at once if you had six pans or woks? But at least this model wasn't dual fuel. Those are just so problematic after 5 years...
January 18, 2010

imjustatree said…
wow. after reading your series of posts on the place, i only have one word to say: BALLIN!!! so many goodies too! always a nice surprise. thank you for your meticulousness in your report and pictures, so readers like myself can enjoy them thoroughly!
January 19, 2010

EatTravelEat said…
Sawyer,
That was what I was hoping for when I posted this series, but I still know that I can do better. Pelican Hill is amazing though with their goodies though! Makes it so easy to remember them. :) Other hotels also do this around the world; but not many in the US.
January 20, 2010