Well, Las Vegas was the course. Palazzo and Venetian were offering free nights on some of the nights during Spring Break. Wynn had a special offer that came with a free night as well (via special email). At least 5 people who I knew were going on the same week. Las Vegas is after all, the inexpensive Californian vacation. Cheap room rates for what you get, and you don't need to fly (saving tons of money which can be spent on other things, like food). Even teachers said, "If I'm going anywhere, I'm going to Vegas. It's cheap!" Besides, why not go for complimentary rooms anyway?

Too late. Booking on Sunday for a Tuesday departure? Crazy! It's what happens when there is work to be done first. Ahem...my trip to Hong Kong two years ago was booked less than 12 hours before departure, so we're not first-timers into the "procrastination" traveler zone.

What we noticed already was that the rooms were filling up. And not at ultra low rates like in 2008/2009, but higher rates. Mandalay Bay and The Hotel were completely booked for a convention. Mirage used to offer suites a few days before, but on Sunday it was just regular rooms at 110 dollars before resort fee (our cost last year was 89). Wynn had no special offer for connecting a room with a suite like they did six years ago. And all the free offers? Wynn's email for the booking code had yet to arrive. Venetian and Palazzo, they were out, whether if we were going to pay for our rooms or not.

So, what hotel to pick? Most regular rooms were bumped up in price, but suites were at their usual pricing. Saving the regular rooms for next time, we decided suites for this time. Besides, we haven't done much traveling in quite a while anyway.

Wynn was our first choice, but the fact that we would have had a free room made us go somewhere else. The special offer code, which had to be sent to us, came this week, not the week before. Aria? Vdara? Nah, too dark color scheme. But we still wanted to go, even for one night. Decide later when we were there, it would be. How about Bellagio? Cheaper than Wynn, but still a nice place to stay. Also, less in cost than what we paid five years ago there. 10 percent off with AAA? Okay. Pricey for the tower deluxe to go along with the suite, but they had no two bedroom suites leftover. "Are you going to cancel?" the preservationist said. "No, we're going for sure", we said.

Tuesday wasn't anything better until I knew there was some news on the MGM Mirage stock going upward (wow, how weird). Somehow, I felt better after knowing that and thus, we left. 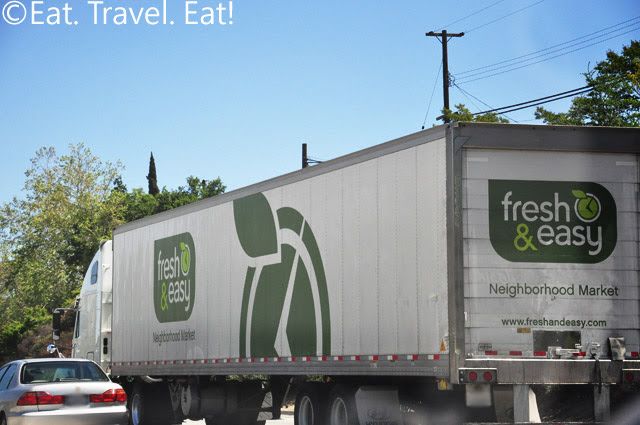 We drove out onto the I-210 freeway like we always do to go to Vegas and what did we see again? A Fresh and Easy truck. Every time we go to Las Vegas, it seems like it is a no-brainer that we will definitely see a F&E truck somewhere. I happened to take a photo even if I didn't really want to. Makes no sense? That's why the truck isn't composed really well in the photo. Thanks to Photoshop this picture looks much more vibrant than it did before :). 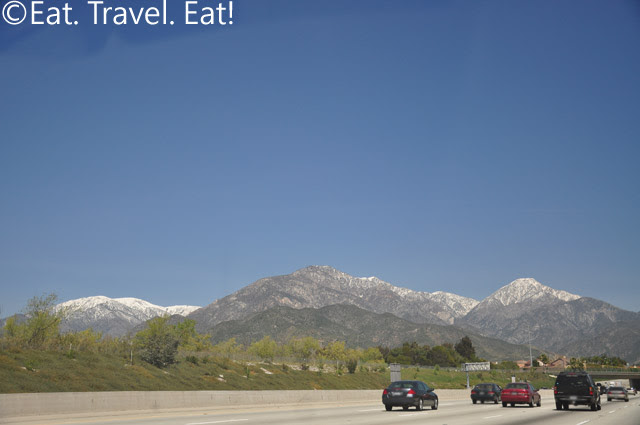 Driving along the I-210 towards the I-15 also gives you plenty of snow capped mountains during winter and spring. Last time, the entire route basically had snow to see. 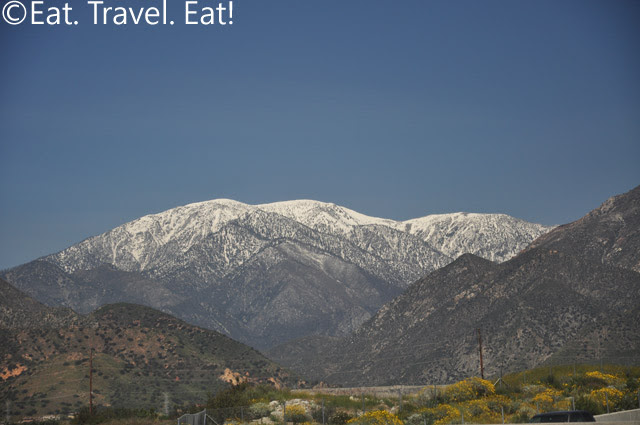 Closeups? Here you go. The snow capped mountains to the left side of the earlier photo. 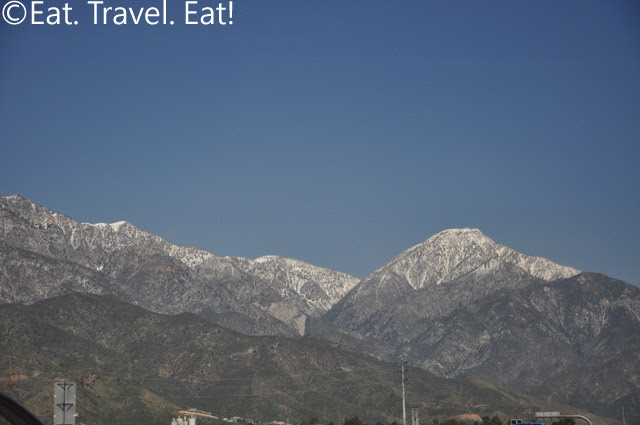 And to the right side now. 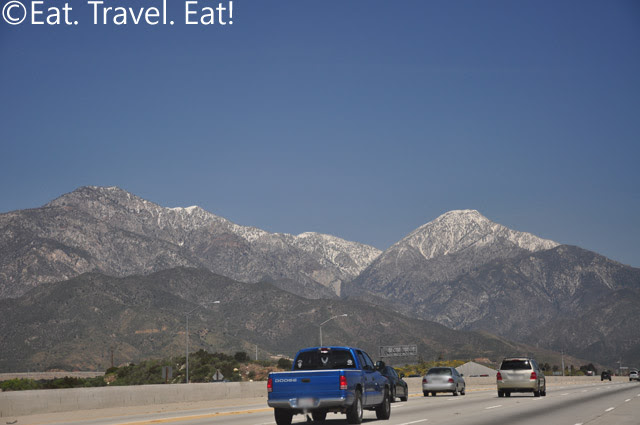 As we got closer to the I-15 split section (for a name...), the mountains we had previously seen became larger, more detailed, and more amazing. I should have bumped up the contrast a bit more, but this will do. 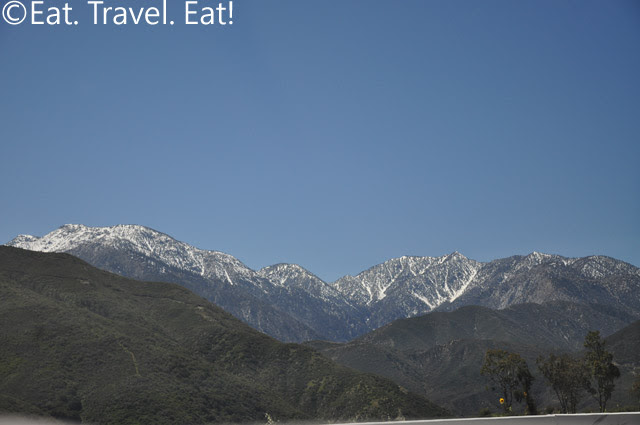 Turning onwards to the I-15, there is always plenty to see. I've remembered the times as a kid on the car to Las Vegas. It was always a beautiful sight to see, especially if it was a nice, warm day with a deep blue sky and fat clouds running through. Everything was so vibrant, and every movement was picture perfect. Imagine trains running through green scenery. So smooth, so like some travel program on TV. This time however, I was sitting on the wrong side of the car this time (right instead of left), and thus it was much harder to capture those points of the ride. Mountains were easier to capture, but the focal length of the only lens I brought (pack light= better photos! (18-105mm DX) gives you this as a result. :)

As we drove further and further, the car got dirtier and dirtier too. Clean car with clean windshield has become dusty car with lots of spots on the windshield! I'm quite intrigued as this, as our cars used to get dirty in California with the bird poop and such. But now, California seems to never get our cars dirty other than by dust that slowly collects on the car.

Driving furthermore, we passed by Victorville, Barstow, Baker. Victorville has developed quite a bit over the past years. It used to be plain, with some car dealerships. Now, it's a lot of car dealerships, and plenty of shopping. A few years brings quite many changes to the world.

And of course, we passed by the Zzyzx Road, one of the roads that was always fun for me to go past. The name is just so cool to me! And on a not so happy note, we also passed by the place where we popped a tire due to stuff on the freeway. It was funny because sometimes, we would see people also waiting on the side for help at the exact same spot. 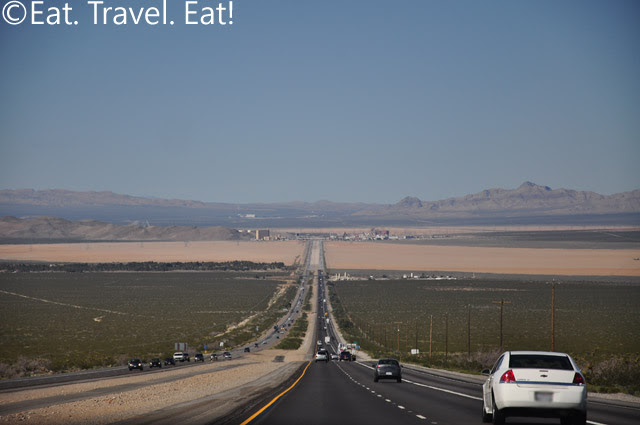 It was quite obvious that we were getting there when the words "downhill" started to appear on the signs nearby. For me, it was "time to take out your camera", as downhill equals very pretty scenery to look at. Like the photo above! It would be even more interesting if I had took it even earlier so there would be more "downhill" to see. That is Primm, NV in the distance, not Las Vegas. Primm is a destination for outlet shopping, but I liken Marshalls to outlet shopping now. Better quality goods at somewhere where there is more than just outlets to see!

After another 40 miles, we were in Las Vegas. Finally! Headaches abound, sickness coming back, we were stuck in traffic. Really? Really?

It took us a straight 30 minutes to get from Mandalay Bay to the Bellagio. That's Vegas now. Last time? 10 minutes. No traffic, easy going. This time, it was traffic, and more traffic. Not fun for families with younger kids either as Excalibur, Luxor, and the Planet Hollywood (especially) has lots of continuously run inappropriate content on their ad screens. I've never really noticed any showing of inappropriate stuff for kids to see by hotels, but this time it was quite more. Eww to those hotels who put those ads on repeat run all day long (no wonder why I never stayed at those hotels anyway)! Don't copy Apple with their iPod Nano commercial (nano-chromatic) at the Fashion Show Mall during December 2008!

dave said…
Hehe, when seeing that hill you know you're almost there and you start to become really excited.
April 17, 2010

tigerfish said…
I'm so envious again! It is definitely nearer to drive to Vegas from SoCal. We usually fly to Vegas from NorCal. Next time I wanna try a Spring road trip, maybe? Are the room rates cheap during this time? ;p
April 19, 2010

EatTravelEat said…
dave,
Yep! For me, it was finally, we are there as I wanted to relax! Car drives when you are sick are not very fun...

tigerfish,
Yep, room rates are quite good at the time. Just look for special offers and sign up with hotel websites for good deals!
April 19, 2010